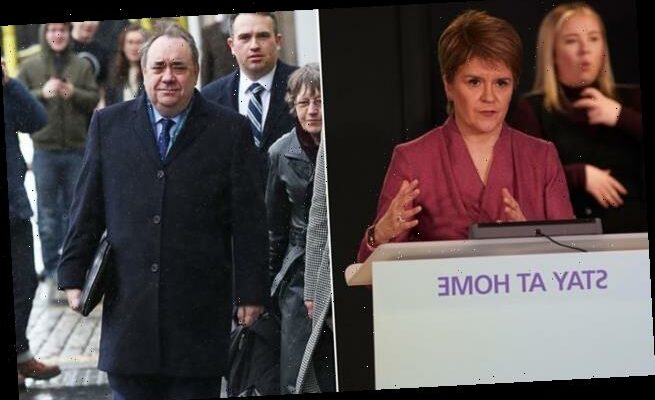 Nicola Sturgeon is to hit back at ‘absolute nonsense’ claims that she misled parliament and gave untrue evidence regarding sexual harassment allegations against predecessor Alex Salmond.

Mr Salmond said the First Minister breached the ministerial code in relation to a meeting with him in her home, where she was told about the allegations made against him.

In evidence to the committee established to look into the process of the complaints, which were deemed unlawful and saw Mr Salmond win more than £500,000 in public money, the former first minister accused Ms Sturgeon of misleading Holyrood.

Deputy First Minister John Swinney has now told Politics Scotland he has confidence in what Ms Sturgeon will say when she appears before the committee later this month. 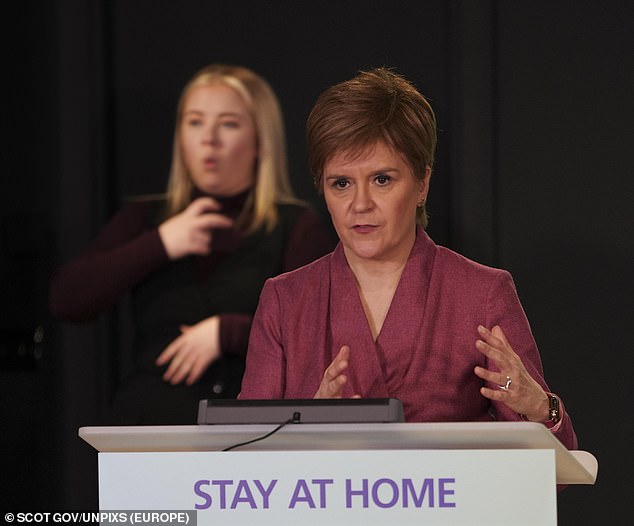 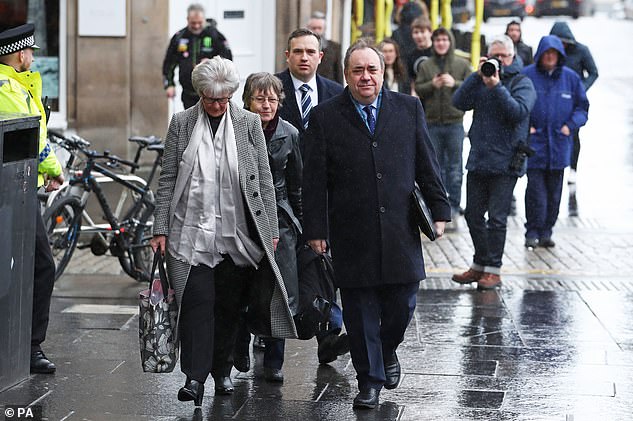 In an explosive intervention, the former First Minister (pictured in March) accused his successor of making ‘ridiculous’ and ‘wholly false’ claims about their meetings to discuss the handling of complaints against him

‘The First Minister looks forward to setting out, in detail, all of the views and perspectives she has on this issue, to put to rest some of the absolute nonsense that has been circulating about this particular issue.’

Swinney added: ‘We’ve got to remember that we faced a very difficult situation of having to investigate complaints about inappropriate behaviour, a lot of which have now been conceded by Alex Salmond in court, and that issue had to be addressed.

‘An incredibly difficult situation, and the First Minister will set out exactly her perspective when it comes to all the relevant inquiries into this issue.’

Initially, Ms Sturgeon said the April 2 2018 meeting in her Glasgow home was the first she had heard of the allegations; however, it later emerged that she had met Mr Salmond’s chief of staff, Geoff Aberdein, in her Holyrood office four days earlier.

Mr Salmond said omission of the meeting with his aide was ‘a breach of the ministerial code’.

November 2017: Allegations regarding Alex Salmond’s behaviour are raised with the SNP by Sky News. Nicola Sturgeon said she spoke to him about this – and he ‘denied it’. No further action was taken.

March 29, 2018: Miss Sturgeon meets Geoff Aberdein in her Scottish parliament office where she has admitted they discussed the possibility of a meeting with Mr Salmond. Miss Sturgeon – after initially forgetting about this meeting – says there was ‘the suggestion that the matter might relate to allegations of a sexual nature’.

April 2, 2018: Miss Sturgeon and Mr Salmond meet at the First Minister’s home. According to Miss Sturgeon, this is the first time she heard of the complaints made against him. Despite this, she has insisted that the matters discussed were party business.

April 23, 2018: Miss Sturgeon and Mr Salmond hold a ‘substantive’ phone discussion. During this call, Miss Sturgeon claims that Mr Salmond asked whether she would speak to Leslie Evans about ‘mediation’ with the complainants. A special adviser was in the room at the time.

June 6, 2018: Miss Sturgeon writes to Mrs Evans to inform her that she has held discussions with Mr Salmond.

July 18, 2018: Miss Sturgeon and Mr Salmond speak again on the phone. Miss Sturgeon said that ‘by this time’ she was ‘anxious – as party leader and from the perspective of preparing my party for any potential public issue – to know whether his handling of the matter meant it was likely to become public in the near future.’

This is the last time Miss Sturgeon and Mr Salmond speak. During this time they also exchange a number of WhatsApp messages in which they discuss the affair – including Mr Salmond’s decision to seek a judicial review over the government’s probe into the two complaints. He goes on to win this and is awarded £500,000 in legal fees.

Ms Sturgeon said in her evidence to the committee that Mr Aberdein had stopped by her office while in Holyrood for another reason, an assertion Mr Salmond described as ‘simply untrue’.

An inquiry is currently ongoing into whether Ms Sturgeon did violate ministerial rules in relation to the matter.

Both Mr Salmond and the Scottish Conservatives pushed for the remit of the inquiry, being conducted by James Hamilton QC, to be widened.

However, Mr Swinney said the investigation is already able to investigate any breach of the ministerial code.

He said: ‘I’m really surprised by this line of argument from Alex Salmond and the Scottish Conservatives, because it appears they’re not keeping up with events.

Mr Salmond said: ‘I can confirm that I submitted evidence to Mr James Hamilton, the independent adviser on the ministerial code, at his repeated request at the end of last year.

‘The same evidence has now been given to the parliamentary committee, at their request, to assist with phase 4 of their Inquiry into the actions of ministers and civil servants.

‘It is a matter for Mr Hamilton and committee members what they do with my evidence but I stand by the contents of the document and I am prepared to do so under oath in front of the committee.’

In early 2019, Miss Sturgeon bowed to pressure from opponents and referred herself for an official investigation into whether she broke strict Scottish Government rules by failing to report details of her meetings with Mr Salmond.

During these meetings, they discussed sexual misconduct allegations against Mr Salmond but she did not publicly disclose that these meetings had happened. The ministerial code states that ministers must ‘arrange for the basic facts’ of meetings concerning Government business to be recorded.

Miss Sturgeon has insisted that she did not record details of the first meeting because she thought it was going to be about ‘party business’.

In his submission, Mr Salmond brands the claim ‘ridiculous’. He said: ‘In her written submission to the Committee, the First Minister has subsequently admitted to that meeting on 29th March 2018 (with Mr Aberdein), claiming to have previously ‘forgotten’ about it. That is, with respect, untenable.

‘The pre-arranged meeting in the Scottish Parliament of 29th March 2018 was ‘forgotten’ about because acknowledging it would have rendered ridiculous the claim made by the First Minister in Parliament that it had been believed that the meeting on 2nd April was on SNP Party business and thus held at her private residence.

‘In reality all participants in that meeting were fully aware of what the meeting was about and why it had been arranged. The meeting took place with a shared understanding of the issues for discussion – the complaints made and the Scottish Government procedure which had been launched.

‘The First Minister’s claim that it was ever thought to be about anything other than the complaints made against me is wholly false.’

Mr Salmond was awarded more than £500,000 in costs after a judicial review found the handling of complaints against him was unlawful and tainted with apparent bias because of prior contact between the investigating officer and complainants.

In his submission, Mr Salmond claims that ‘at the very latest by October 31st 2018, the government and the First Minister knew of legal advice from external counsel that ‘on the balance of probability they would lose the Judicial Review and be found to have acted unlawfully’.

He said: ‘Despite this the legal action was continued until early January 2019 and was only conceded after both Government external counsel threatened to resign from the case which they considered to be unstateable. This, on any reading, is contrary to section 2.30 of the Ministerial Code.’