‘I look forward to working with both of you to further strengthen the special alliance between the US and Israel,’ Netanyahu wrote on Twitter, referring to Biden and vice president-elect Kamala Harris.

Netanyahu, whose Twitter account features a photo of him seated next to Trump, said he and Biden had ‘a long and warm personal relationship for nearly 40 years, and I know you as a great friend of Israel’.

The Israeli premier had previously described Trump as his country’s strongest-ever ally in the White House, and the Republican advanced policies that delighted Netanyahu’s right-wing base.

His tweet congratulating Biden came more than 12 hours after US media networks called the race in the Democrat’s favor. It also did not explicitly state that Biden had won.

Meanwhile the heads of China and Russia – Xi Jinping and Vladimir Putin – still have yet to extend congratulations to Biden more than 24 hours after his victory. 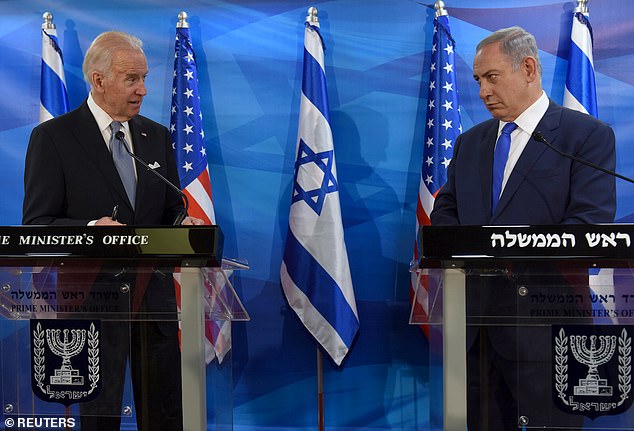 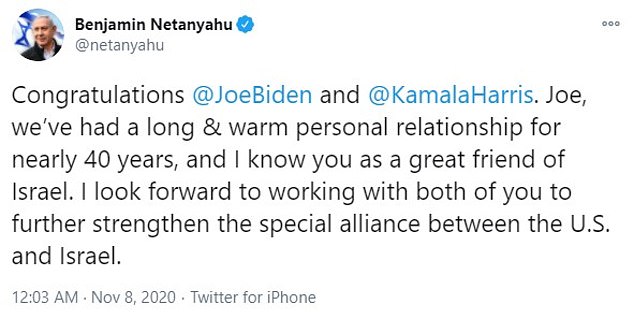 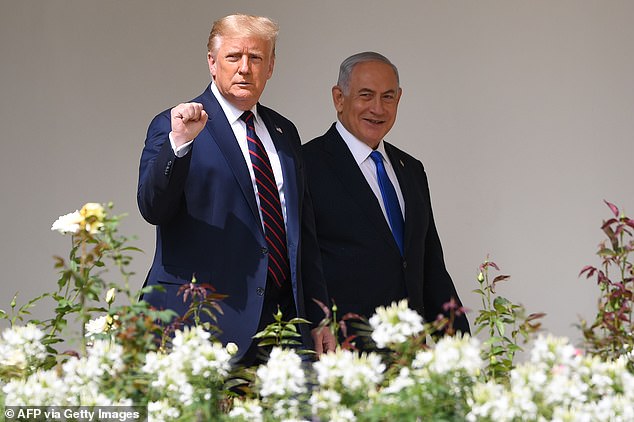 In a subsequent tweet, Netanyahu thanked Trump ‘for the friendship you have shown the state of Israel and me personally, for recognizing Jerusalem and the Golan, for standing up to Iran, for the historic peace accords and for bringing the American-Israeli alliance to unprecedented heights’. Pictured: Trump and Netanyahu in September at the White House 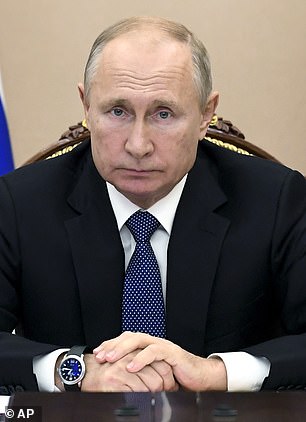 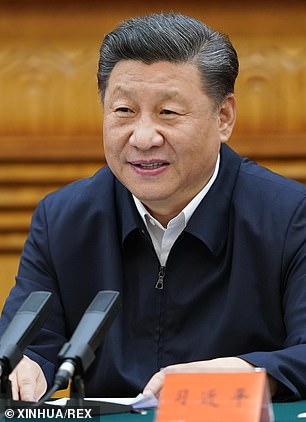 In a subsequent tweet, Netanyahu thanked Trump ‘for the friendship you have shown the state of Israel and me personally, for recognizing Jerusalem and the Golan, for standing up to Iran, for the historic peace accords and for bringing the American-Israeli alliance to unprecedented heights’.

Trump unilaterally pulled out of the 2015 Iran nuclear deal – an agreement between Tehran and world powers loathed by Netanyahu – and recognized Jerusalem as Israel’s ‘undivided’ capital.

He also endorsed Israeli sovereignty over the Golan Heights – which was seized from Syria – and avoided criticizing Jewish settlements in the occupied West Bank.

Netanyahu, along with his defence and foreign ministers, had been criticized Saturday evening by opposition leader Yair Lapid for not congratulating Biden on his victory in a timely manner.

‘The fact that Netanyahu, (Benny) Gantz and (Gabi) Ashkenazi have yet to congratulate the US president-elect is shameful cowardice that harms Israel’s interest,’ Lapid said.

‘If the president of France, the chancellor of Germany and prime minister of Britain can do so, you can too,’ he wrote on Twitter.

According to a poll before the US election by the Israel Democracy Institute think-tank, 63 percent of Israelis wanted Trump to win a second term.

The White House has not yet responded to Netanyahu’s remarks toward Biden and Trump, who has refused to concede.

While Netanyahu didn’t address Biden as ‘president-elect’, Israel’s President Reuven Rivlin did in his own statement.

‘I send the blessings of the Israeli people and of the State of Israel, to our friend Joe Biden on your election as the 46th President of the United States of America. I also send congratulations and best wishes for your success, Vice President-elect Kamala Harris,’ Rivlin said.

‘Mr. President-elect, as a longstanding friend of Israel, you are now the leader of the free world and of the State of Israel’s closest and most important ally.

‘The strategic alliance between our two countries and peoples is stronger than any political leadership, and is not based solely on friendship. It is rooted deeply in our shared values and in our longstanding commitment to freedom and democracy as the foundations of our societies.’

Like Netanyahu, Rivlin made a nod to Trump, thanking the incumbent for ‘four years of partnership in strengthening Israel’s security’.

‘I have no doubt that our special relations and multifaceted cooperation will continue to flourish and grow in the future,’ he added, pivoting back to Biden.

‘On behalf of the Israeli people, I wish you and your future administration great success, and extend my invitation to you to visit Jerusalem as our guest.’ 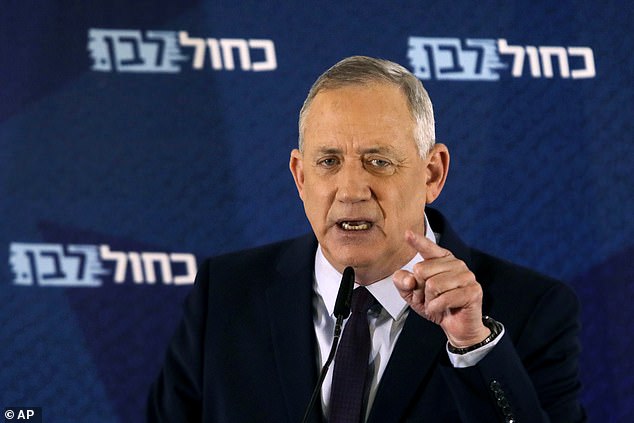 While Netanyahu didn’t address Biden as ‘president-elect’, President Reuven Rivlin did in his own statement, saying: ‘I send the blessings of the Israeli people and of the State of Israel, to our friend Joe Biden on your election as the 46th President of the United States of America’

Rivlin joined a bevy of international leaders congratulating Biden on his win, as Trump refused to concede the race and vowed to launch legal battles in states that didn’t go in his favor.

In Asia, a region on edge about the strategic ambitions of China’s ruling Communist Party, the elected leaders of Japan, South Korea and Taiwan invoked ‘shared values’ with Washington and expressed hope for close relations.

Absent from the well-wishers was Chinese President Xi Jinping, who has had a complicated relationship with Trump as the US and China are embroiled in conflicts over trade, security and technology.

Also absent was Russian President Vladimir Putin, who has been friendly with Trump. 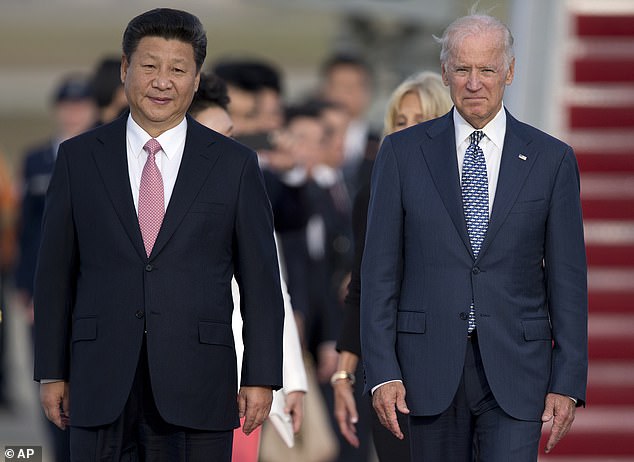 Absent from the well-wishers was Chinese President Xi, who has had a complicated relationship with Trump as the US and China are embroiled in conflicts over trade, security and technology. Xi and Biden are seen together in 2015 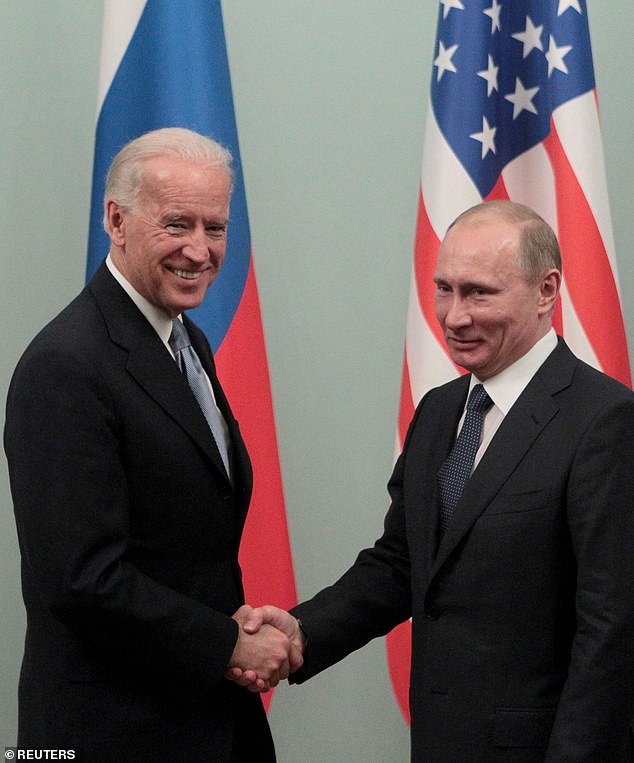 Also absent was Russian President Putin, who has been friendly with Trump. Putin and Biden are pictured during a meeting in Moscow in 2011

Other leaders who supported Trump, including President Rodrigo Duterte of the Philippines, congratulated Biden, indicating they rejected Trump’s claim the election wasn’t over.

Duterte, who had said Filipino-Americans would ‘get the best deal with Trump’, expressed hope for enhanced ties based on ‘shared commitment to democracy, freedom and the rule of law’.

Most Western allies welcomed a fresh start with Washington. Many have been dismayed at Trump’s criticism of decades-old military and economic alliances.

‘We want to work in our cooperation for a new trans-Atlantic beginning, a New Deal,’ said German Foreign Minister Heiko Maas on Twitter.

Others expressed hope Biden might revive cooperation on health, climate and other issues following Trump’s rejection of the proposed Trans-Pacific Partnership trade agreement and pressure on Canada, Mexico, South Korea and other partners to renegotiate trade terms.

UK Prime Minister Boris Johnson, who had a good relationship with Trump, extended his congratulations on Saturday before saying he planned to call Biden ‘soon’ on Sunday.

In an interview with AP, Johnson promised to work with Biden to spread democracy, defend human rights and combat climate change, as he sought to woo a leader who sees the world very differently to the outgoing American leader.

Johnson stressed the strength of trans-Atlantic ties, saying the two countries’ ‘common global perspective’ would be vital to shore up a rules-based global order that is under threat.

‘The United States is our closest and most important ally,’ said Johnson, who hasn’t yet spoken to Biden since he became president-elect. ‘And that’s been the case under president after president, prime minister after prime minister. It won’t change.’

Canadian Prime Minister Justin Trudeau, who was the target of personal insults by Trump, shared his congratulations with Biden on Twitter.

‘I look forward to working with President-elect Biden, Vice President-elect Harris, their administration, and the United States Congress as we tackle the world´s greatest challenges together,’ Trudeau wrote.

He cited challenges including the coronavirus and ‘ensuring a free and open’ Indo-Pacific region, a reference to China’s disputes with its neighbors over control of vast tracts of ocean.

‘American leadership is indispensable to meeting these challenges,’ Morrison said.

Prime Minister Imran Khan of Pakistan said he looked forward to working together to end illegal tax havens and on peacemaking in Afghanistan.

Maduro said Venezuela, which is under crippling US sanctions aimed at forcing him out of office, was ‘ready for dialogue and understanding’ with the United States.

The election outcome drew mixed reviews in Iraq, where Biden is remembered as a champion of the US invasion in 2003. Still, Iraqi President Barham Salih described Biden as a friend and trusted partner.

In Iran, where the economy has been choked by US sanctions, senior Vice President Eshaq Jahangiri wrote on Facebook: ‘The era of Trump and his warmongering and adventurist team is over.’

The newspaper Resalat published images of Trump without a mask against the coronavirus and Biden with a mask, and said: ‘Maskless enemy left, masked enemy arrived.’