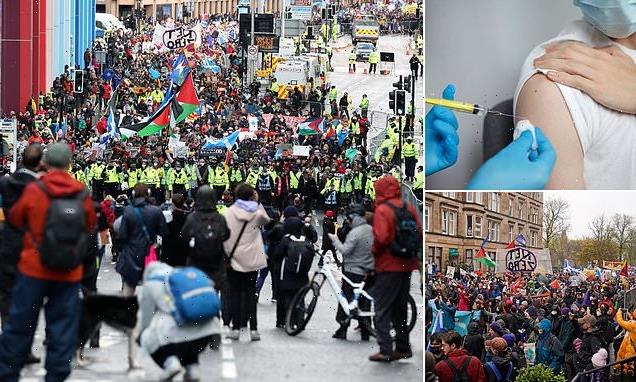 Nearly 300 people tested positive for Covid after going to or protesting at UN climate summit COP26 in Glasgow this month.

Some 291 positive Covid-19 tests were linked to COP26-related activities, an initial assessment found.

However, speaking at Holyrood on Thursday, Nicola Sturgeon said: ‘I can confirm that there is no sign so far of any significant spike in cases associated with Cop. 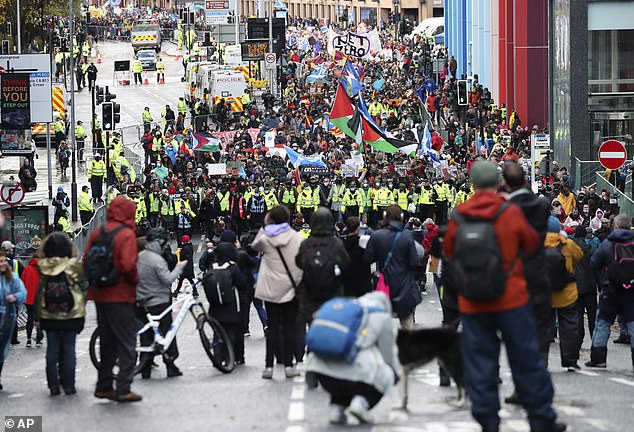 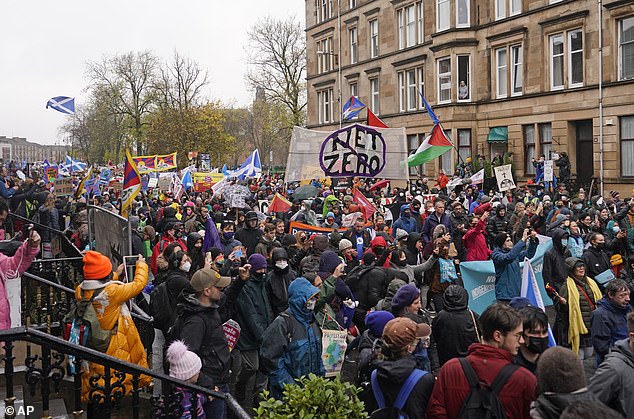 The UN climate summit was held in Glasgow, Scotland, and brought together world leaders and well as eco-warriors on the streets of the UK 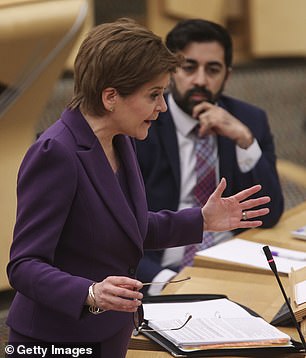 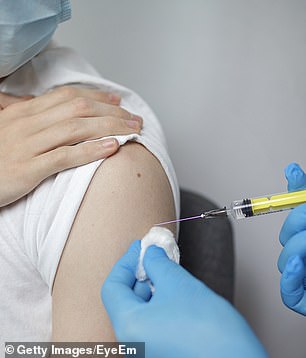 Nicola Sturgeon said in Holyrood today that ‘there is no sign so far of any significant spike in cases associated with Cop’. However, nearly 300 people tested positive for Covid after going to or protesting at UN climate summit COP26 in Glasgow this month

‘Rigorous measures were put in place to minimise the risks of Covid transmission.

‘For example, anyone entering the main summit site – the Blue Zone – had to provide evidence of a negative lateral flow test result.

‘Information published earlier today by Public Health Scotland suggests that of the people officially affiliated with Cop26, approximately four in every 1,000 tested positive for Covid through routine lateral flow testing.’

The First Minister added: ‘All of this suggests that the mitigations put in place were effective. 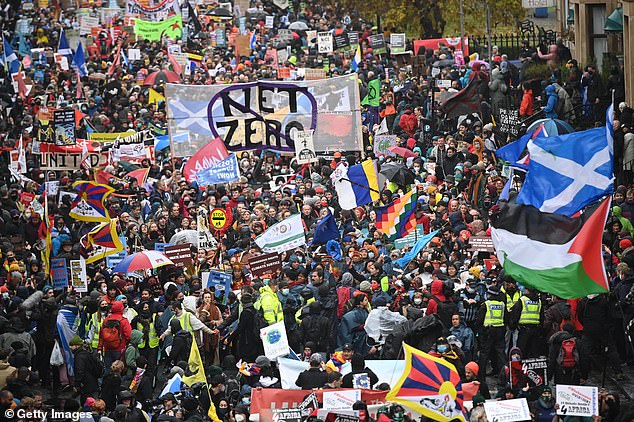 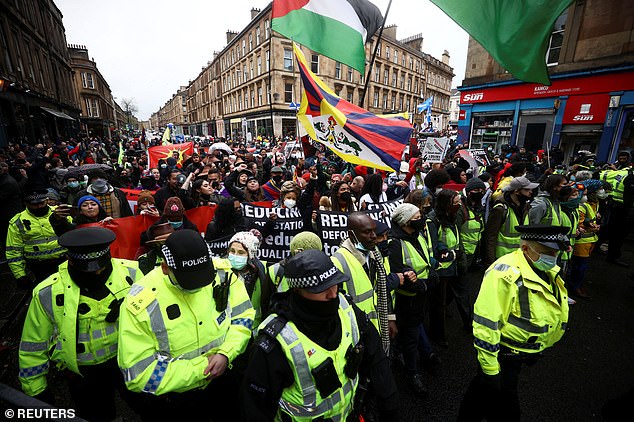 ‘I want to put on record my thanks to delegates for their compliance and indeed to everyone who worked so hard in the run-up to and during Cop26 to secure the safest possible environment.’

The findings from Public Health Scotland (PHS) assessed the number of people who reported to Test and Protect that they had been to an event related to the climate summit, including workshops and protests outside the Scottish Events Campus in Glasgow.

PHS also estimated that just four out of every 1,000 people in the conference centre itself tested positive for the virus. 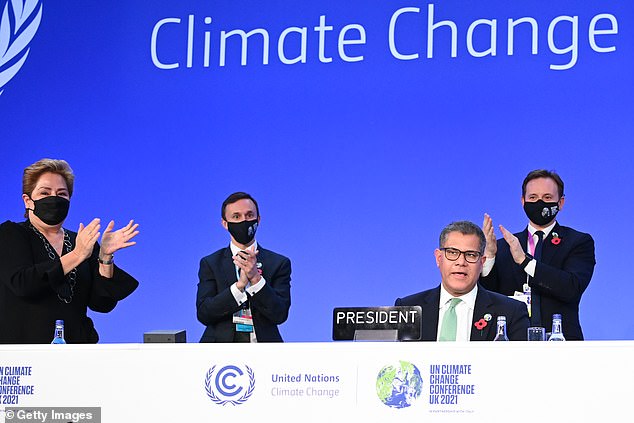 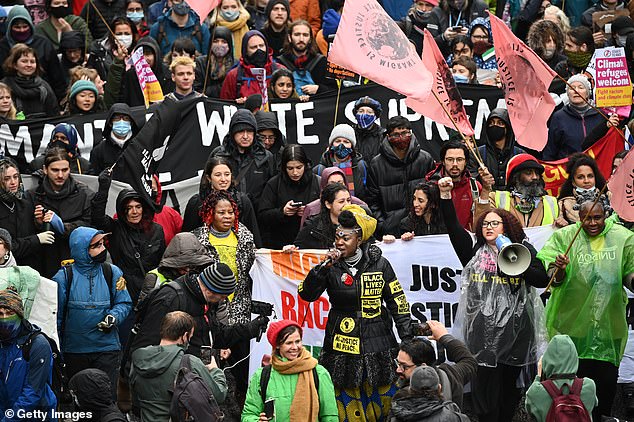 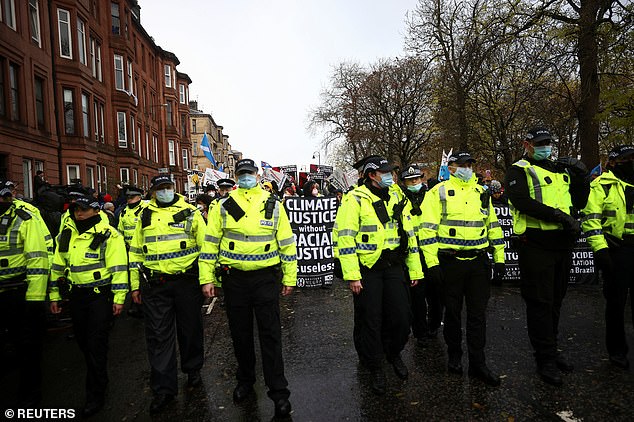 The cops at COP26: Police lined up to protect protesters with a banner that read ‘climate justice without racial justice is useless’ at the UN climate change conference in Glasgow 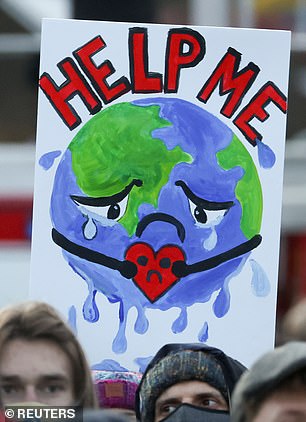 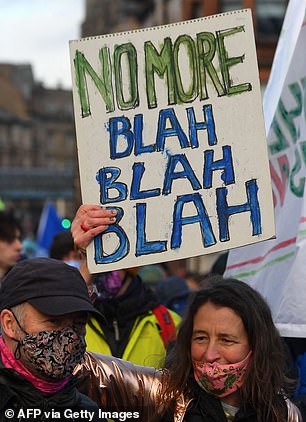 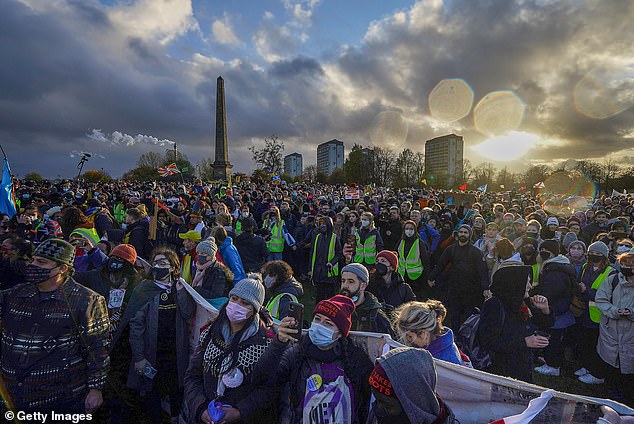 About 12 in every 1,000 people in the wider Scottish population tested positive in the week of November 6.

PHS said further assessment of the impact of the summit on case numbers will be required, given the event closed on Saturday.

Attendees were asked to show a negative lateral flow test before accessing the venue, and there was enforced mask wearing and intensive cleaning regimes.

The PHS report shows 92 people returned a negative test, but were in the venue while potentially infectious.

‘One explanation for this is that the performance of LFDs, even in the hands of trained users, can be less sensitive than PCR-based tests,’ the report said. 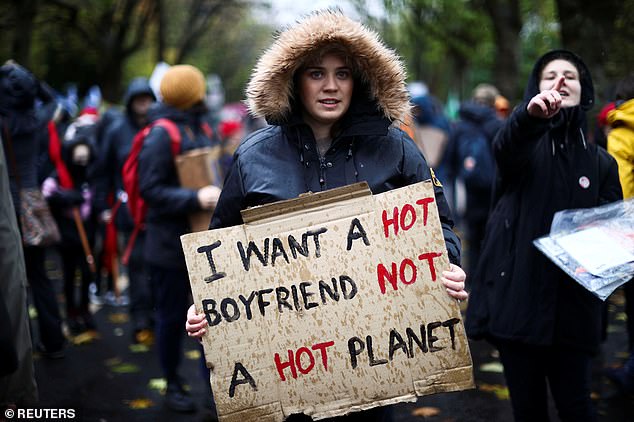 ‘As a result, early asymptomatic infections may have been missed.

‘Further linkage of LFD and PCR linkage may identify additional people who tested positive only by PCR or, alternatively, people who subsequently tested negative by PCR.

‘Consideration of this additional analysis will be important in refining final estimates of infection rates amongst Cop26 affiliates.’

The report added: ‘Whilst early analysis of surveillance data available to PHS shows that there is, thus far, no appreciable evidence to indicate that Cop26 has had an impact on Covid-19 infections in Scotland, a fuller evaluation, allowing observations and analyses on data for the several weeks following the end of the summit, is required.

‘Accordingly, and as noted in the outset of this report, unless more urgent communication is needed, PHS will publish an update to this report in end December 2021.’