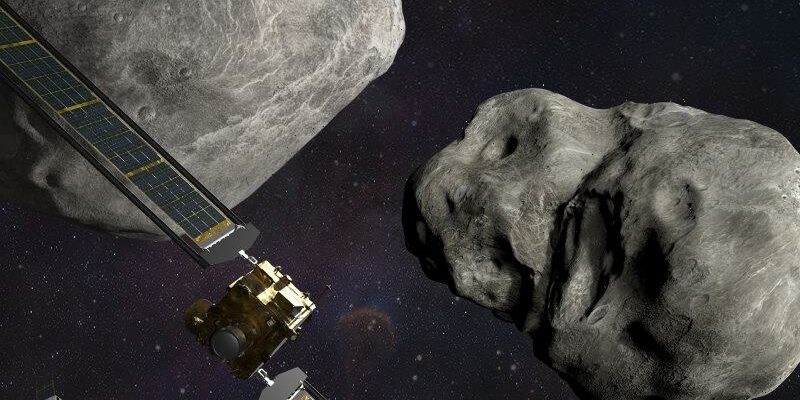 NASA’s asteroid-hunting spacecraft has successfully smacked head-on into an asteroid.

NASA’s Double Asteroid Redirection Test spacecraft, known as DART, was due to deliberately collide with the asteroid Dimorphos – which is about the size of the Great Pyramid of Giza – at 9.15am Australian time on Tuesday, and achieved its mission right on time.

On the live-streamed video feed Dimorphos slowly grew from a white pixel on a black background to a rock and then finally to a shadow-and-rock-covered boulder. The camera from DART kept rolling all the way in as the spacecraft hit the rock – before the feed finally died.

DART is a test of NASA’s planetary defence plans. The hope is that an asteroid at risk of striking the Earth could be diverted by hitting it with a spacecraft.

“Now is when the science starts. Now we’re going to see for real how effective we were,” said NASA’s Planetary Science Division director Dr Lori Glaze.

The asteroid is massive – 160 metres in diametre, about the size of a football field – and dwarfs the tiny 570-kilogram spacecraft. To make it move, they need to hit it really really hard – about 6.44 kilometres per second.

The strike still was not hard enough to pinball the asteroid in the other direction. The hope was to move it just slightly off its orbit of its larger sister asteroid Didymos. A second craft, LICIACube, flew alongside DART to monitor the collision and aftermath, beaming all the data back to Earth.

Australia played a key role in the mission, monitoring the craft’s data in its final moments.

“This is an Armageddon, Deep Impact and Don’t Look Up all rolled into one,” said Glen Nagle, spokesman for the CSIRO-managed Canberra Deep Space Communication Complex, on Monday night.

“We do want to have a better chance than the dinosaurs had 65 million years ago.”