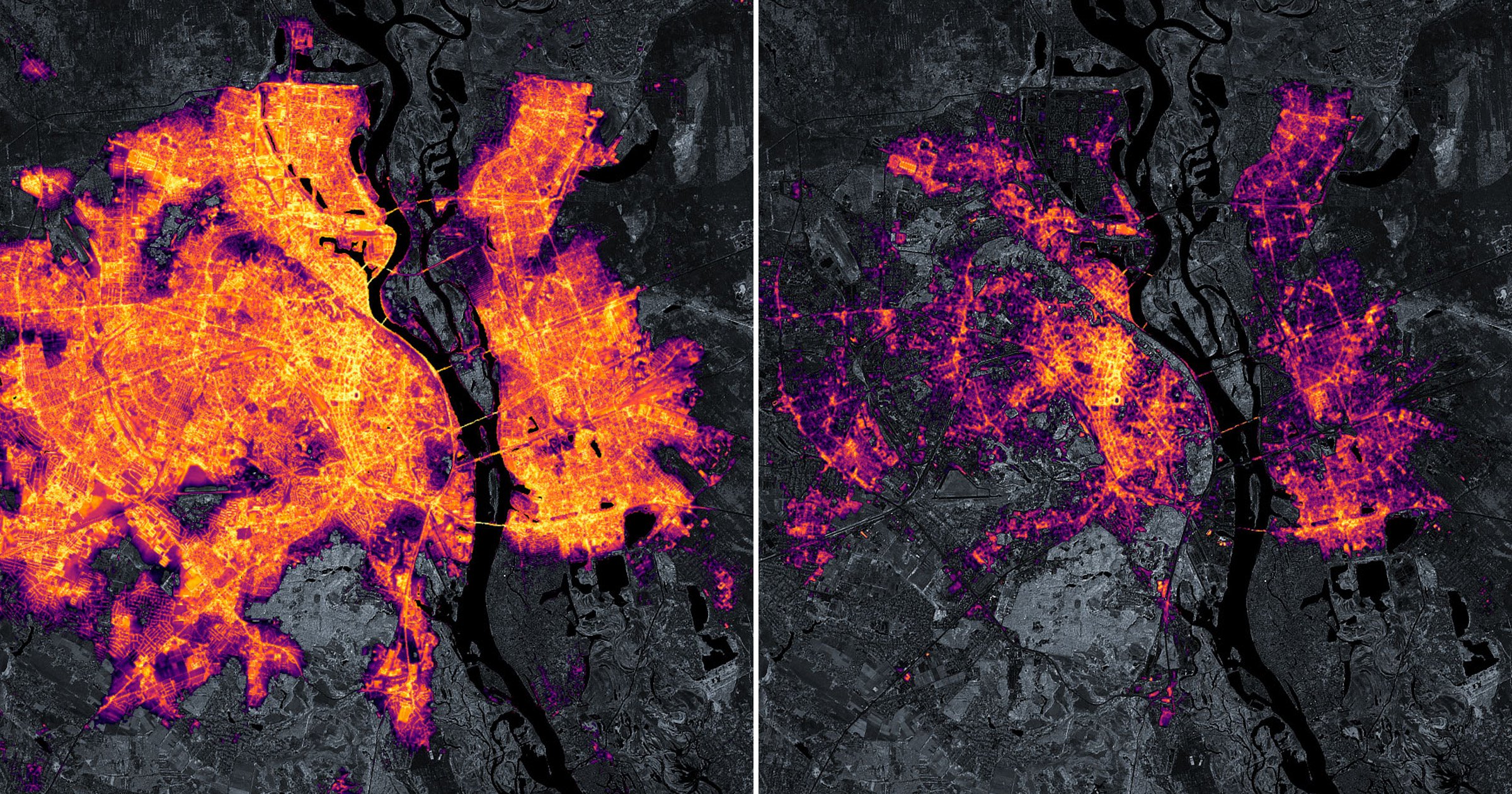 Startling NASA satellite images reveal how Ukraine’s lights have been extinguished in the wake of Russia’s devastating invasion.

Pictures captured from space show Kyiv lighting up the night sky in January, one month before Moscow launched its attack.

However, the lights are significantly dimmed in March as Kremlin troops advanced on the capital.

Cities that were once a hive of activity formed dots of light now no longer visible following the fierce fighting.

The images use night-time sensing capabilities on NASA satellites.

The technology was employed by the agency’s Goddard Space Flight Centre (GSFC) and the Universities Space Research Association (USRA) to observe changes in light usage in Ukraine.

After a ‘significant reduction’ in March, power has slowly been restored as regular human activity returns, particularly around the capital.

The data lays bare the disastrous impact Vladimir Putin’s invasion has had on neighbouring Ukraine.

USRA scientist Eleanor Stokes said: ‘It is generally hard to get data about conflict areas, which makes satellite imagery quite powerful.

‘These data show us one dimension of how the impacts of the conflict have been distributed within Ukraine.

‘In the short term, the data are useful for humanitarian relief agencies because they provide estimates of where and how many people have lost access to basic services, which exacerbates the loss of life.

‘In the longer term, scientists use this data to understand how conflict has impacted development outcomes and the economy.’

The research was conducted as part of NASA’s Black Marble project, which calibrates nightlight data for scientific observations.

‘In the first few months of the war, electricity and basic services were attacked in several major cities,” said Stokes.

Russia-Ukraine war: Everything you need to know

Since Russia’s invasion of Ukraine began on February 24, the country has suffered widespread damages and loss of life amid a major bombing campaign.

Millions of people have fled the country, with thousands of British people opening up their homes to Ukrainian refugees.

During the course of the war, Ukraine’s President Volodymyr Zelensky has remained in Kyiv, despite the Ukrainian capital being subjected to a barrage of bombing.

Zelensky has continuously pushed for aid and support from world leaders, as well as pressing for fast-tracked NATO membership.

Meanwhile, Russia’s President Vladimir Putin has been widely condemned for his attack on Ukraine.

His actions have been met by harsh economic sanctions, bans from competing in major sporting events, and countries moving away from using Russian oil.

‘As the war continued into May, we saw a shift – some continued loss of lights in eastern Ukraine and some recovery in the western part of Ukraine.

‘The Black Marble HD images show recovery in the outskirts of Kyiv, in particular, as residents returned to the capital city.’

Some outdoor lighting could have been deliberately dimmed, removed or shut off, researchers noted, as the Kremlin continues its assault on Ukraine.

Despite huge losses by Russian troops, Putin is determined to capture ‘most of Ukraine’, according to US intelligence agencies.

Dwindling morale and mounting deaths have taken their toll on Moscow’s forces – but the war could linger for a long time, it is feared.

Got a story for Metro.co.uk?

Get in touch with our news team by emailing us at [email protected] For more stories like this, check our news page.