Houston: After Gene Kranz retired in the 1990s, he started to give occasional tours to VIPs at NASA's Johnson Space Centre.

It was there in the Apollo Mission Control Centre that Kranz had a view like few others during the highest highs and lowest lows of the moon race. As a flight director, he helped lead the complex human and technical operation that managed the triumph of the Apollo 11 moon landing 50 years ago. He also rallied and refocused NASA mission flight controllers after the tragedy of Apollo 1 in 1967, when Gus Grissom, Ed White and Roger B. Chafee died in a fire during a launchpad simulation. 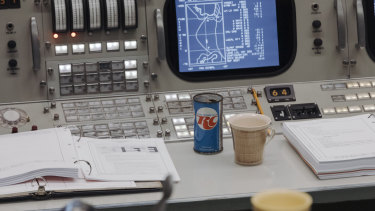 But mission control was a mess.

Kranz would have to show up early before each tour to police the place. He had to pick up trash left on computer consoles that had once landed men on the moon. Water bottles, Coke cans. He would empty brimming waste-baskets.

"This place was not representative of historic mission control," Kranz said. It was likewise a technical mess. "The configuration of the consoles in no way represented where we were and what we did." 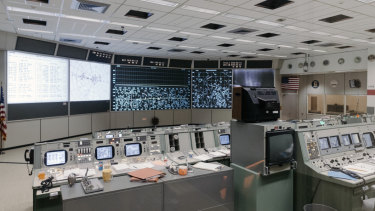 On Friday, Kranz and Jim Bridenstine, the NASA administrator, cut a ribbon marking the official reopening of the restored Apollo Mission Control Centre. It was a three-year, $5 million project, and every inch of the famed heart of America's lunar aspirations was repaired and refurbished. Its reopening comes three weeks before the 50th anniversary of Neil Armstrong's giant leap for mankind, and helps to kick off Apollo festivities across the country.

Apollo mission control had been abandoned in 1992, with all operations moved to a modernised mission control centre elsewhere in the building. Centre employees, friends, family — and anyone, really, who had access to Building 30 — could walk in, take a seat, take a lunch break and take pictures. 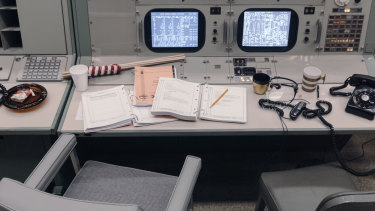 While they were there, they might take a button from one of the computer consoles. Or a switch or dial, anything small — a personal memento from an ancient American achievement. The furniture fabric and carpet underfoot grew threadbare. The room was dark; none of the equipment had power. Wires hung where rotary phones had once sat. The giant overhead screens in front of the room were damaged, and the room smelled of mildew. Yellow duct tape held carpet together in places.

"You knew it wasn't right — you just knew," said Sandra Tetley, the historic preservation officer at the Johnson Space Centre. "But it was not a priority. We are an organisation that's moving toward the future, so there is not a budget to do things like this." 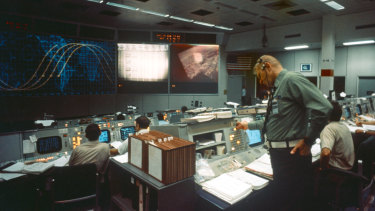 The project began in earnest six years ago. The anniversary loomed, and that was the catalyst to fix up mission control, and to do it right. "We wanted to meet a high standard to restore it, and we were able to meet this 50th anniversary," Tetley said.

The National Park Service established the Apollo Mission Control Centre as a National Historic Landmark in 1985. But once they had resolved to restore the facility in 2013, Kranz, Tetley, the restoration project manager Jim Thornton and others were stymied at every turn. There were funding issues and internal turf wars.

The Apollo Mission Control Centre is in the middle of an operational building where life-or-death decisions are made for missions in flight. Judgment calls regarding spacewalks, station-threatening debris and solutions to mechanical malfunctions leave little margin for error — or interruption by errant tourists.

Eventually, however, Space Centre Houston, a nonprofit educational complex and space museum, took the lead on fundraising efforts. The nearby city of Webster, Texas, donated $5 million of the $7 million necessary to complete the project. A Kickstarter campaign and independent donations filled in the rest.

Like the Oval Office, or the Assembly Room of Independence Hall, mission control is a distinctly American room — one so ingrained into culture that to say its name is to conjure it crisply in the mind, as if you had been there, even worked there. And the restoration was completed in a way that's true to its place in the American historical imagination. 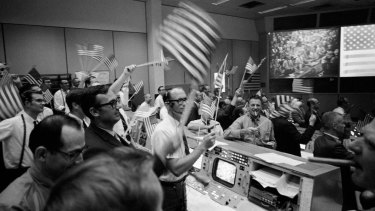 Celebrations on July 24, 1969, at the conclusion of the Apollo 11 mission, from the control room in Houston. Credit:JSC/NASA via The New York Times

Four long rows of pale green consoles fill the room. There are white panels overhead and beige new carpet below. Lights dance purposefully on the consoles, with each one playing Apollo-accurate video broadcasts as would have been seen at the time of the moon landings, or displaying grids of numbers and prehistoric computer code. On four giant displays in the room's front are maps, matrices and astronaut positional plots.

On the consoles are the objects seen in photographs from the Apollo era. Ashtrays and coffee cups, staplers and stopwatches, pens and pencils, headsets and rotary dial phones. There are mission control manuals 3 inches thick and canisters for pneumatic tubes. Binders and eyeglasses and cigar boxes sit next to cans of RC Cola and packs of Winston cigarettes. The room is a museum piece, and yet it is alive, as if engineers stepped out briefly but would be right back. Every item is authentic, painstakingly researched from grainy photographs.

"It was a herculean effort by the team to really pull off what we pulled off in that room today," said Jennifer Keys, project manager of the restoration team. 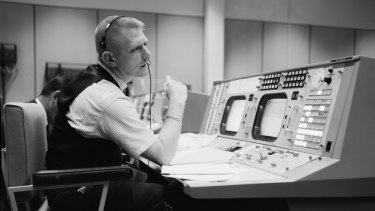 In a photo provided by JSC/NASA, Eugene F. Kranz, flight director, in the control room during the Gemini program, preparing for a four-day flight, in Houston, May 30, 1965. Credit:JSC/NASA via The New York Times

Ceiling tiles that matched the original were eventually recovered from a lobby phone booth elsewhere at the Johnson Space Centre. Preserved wallpaper was discovered behind a fire extinguisher. All had to be meticulously matched or fabricated identically. Original paint was found for the consoles. And across those consoles, the artefacts of a time gone by.

"We tracked things down on eBay, from people's donations — whatever we could scrounge up. We did a scavenger hunt across Johnson Space Centre to find things like trash cans, chairs and binders," said Keys. 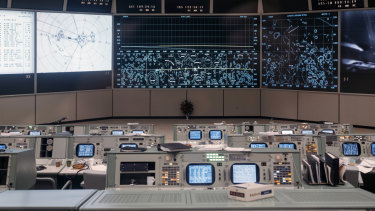 The newly-renovated mission control centre.Credit:JSC/NASA via The New York Times

The flight crews of Apollo mission control were known for their attention to detail. It's how they got every astronaut home. The restoration team showed no less respect for fine details, and the effect is uncanny.

From the observation gallery, you can all but see phantom engineers in white shirts and black ties speaking into headsets very calmly about high-stakes orbital maneuveres, see them making notes and pushing those buttons. The stories there play out in your imagination, and yet before your eyes.

Christopher Craft, who invented flight operations for NASA when the agency was formed, is credited with designing mission control. Nothing like the space program had existed, and there were no models for how it should be done. The air traffic control model wouldn't work, because the tower in that setting has a line-of-sight on everything in its aegis. Mission control's domain, on the other hand, is abstract: a specific set of procedures at any one time, and problems that are solved with mathematics and moxie.

The genius of its design is reflected in the present-day mission control centre that runs operations for the International Space Station. The computers are smaller, the monitors larger, tabletops wider and office chairs nicer. But the design of the room is virtually identical. Five giant screens loom above, with mission status updates and feeds from orbit. And though the time of the Apollo generation draws rapidly to a close, the things used by mission control operators are still basically the same.

From the gallery, it is all plainly visible. Desktops are lined with coffee cups and Coca-Cola, pens and paperwork, binders, headsets and eyeglasses. The room is crowded and calm, the stakes still high. As NASA plots an American return to the moon in the next decade with the Artemis mission, the stakes will get higher yet.

Guided tours for the public will begin Monday. This past week, Kranz walked into the newly restored mission control for the first time. He approved.

"It was dazzling," he said. "You couldn't believe this. All of a sudden you were 50 years younger and you wanted to work in there. I wanted back in that room to work."