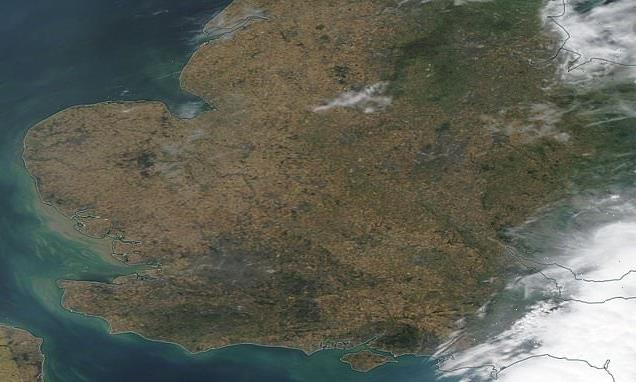 Scorched earth Britain: Amazing NASA satellite images show how parched and brown country is due to heatwave compared to a year ago

Amazing satellite images taken from outer space show the impact of the latest heatwave which has left Britain parched and brown compared to the largely green landscape of July 2021.

Earlier this week, the country saw temperatures soar to record-breaking highs, surpassing the 40C mark for the first time in history.

The heat prompted the Met Office to issue its first ever red warning for extreme heat, meaning there was a threat to life as experts predicted thousands could die in heat-related incidents.

Scorching temperatures also saw dozens of wildfires break out across the country, tearing through the British countryside and in some cases forcing communities to flee as the inferno spread to homes.

Now the damage caused by the unprecedented temperatures has been laid bare in images from American space agency NASA which were shared online by BBC weather presenter and meteorologist Dan Holley.

The shocking images show how Britain’s once vast green landscape has been transformed into arid terrain, scarred by this week’s heatwave. 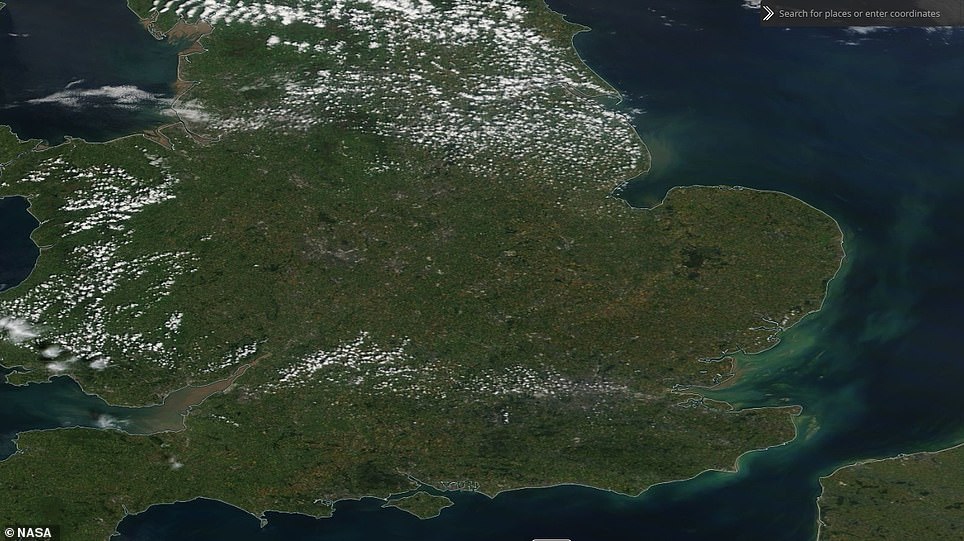 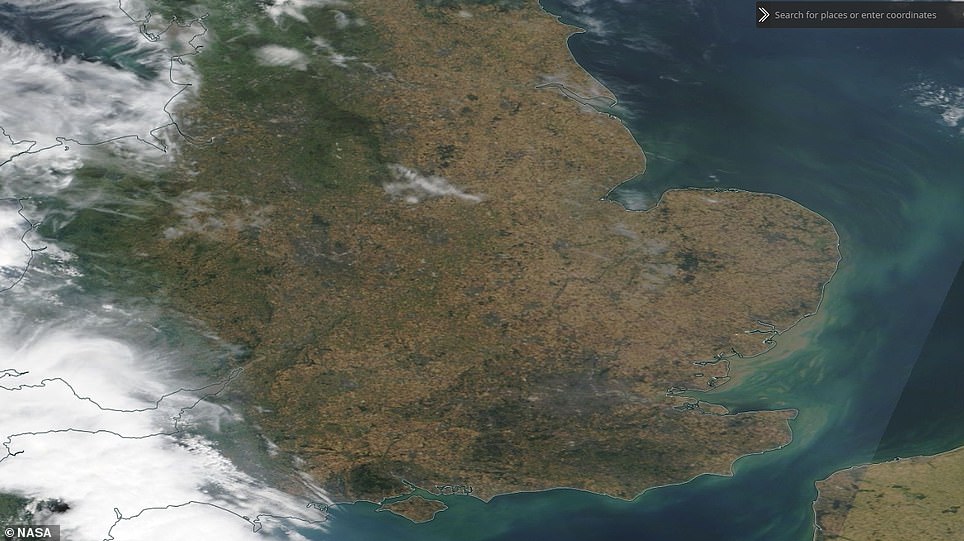 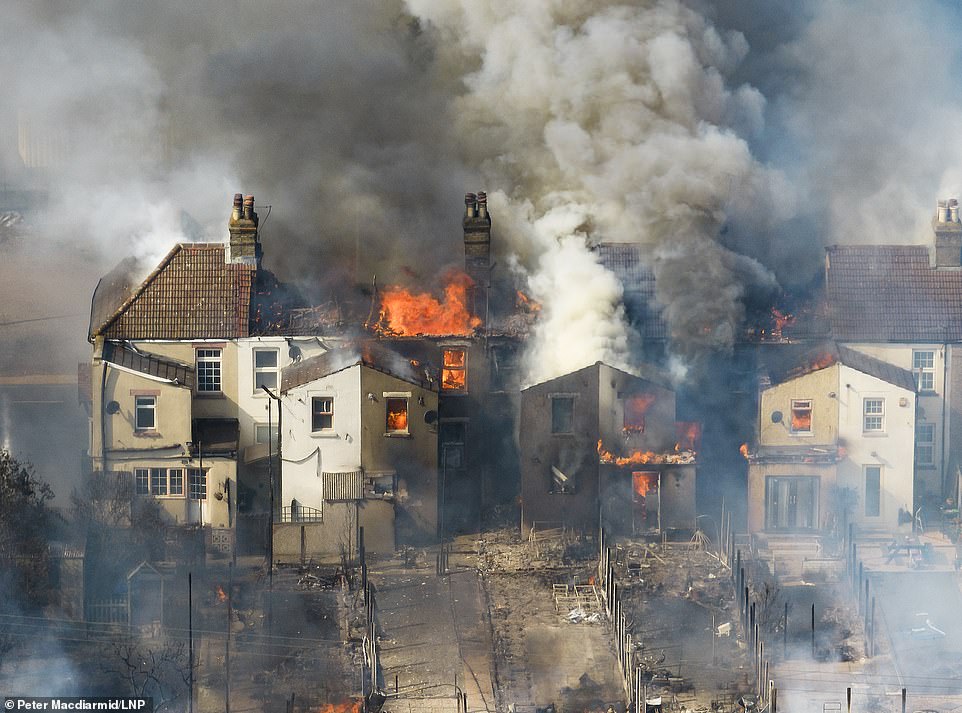 The Wennington fire was the most destructive of major incidents, which saw as many as 63 homes destroyed across the UK 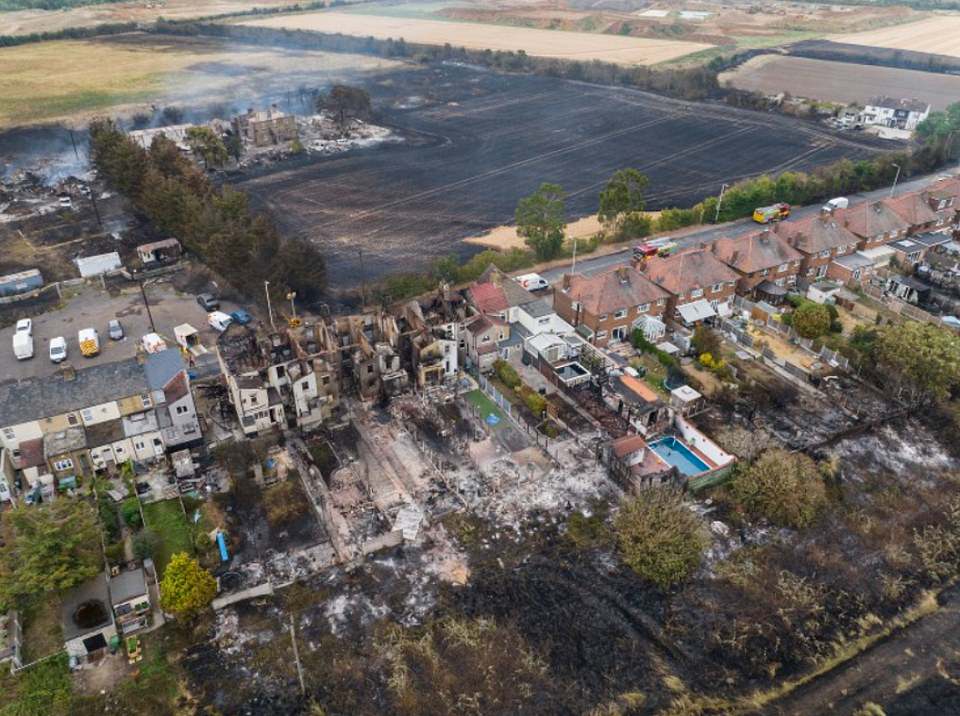 Scorched: More than a dozen families have been left homeless after the fire tore through the small village of Wennington, on the outskirts of east London, on Tuesday amid UK’s record breaking 40C heatwave which has left Britain scarred from heat

There were at least 28 wildfires in Britain on the hottest day of the year (July 19) with hundreds of firefighters across the country battling to keep the raging infernos under control.

A devastating fire was pushed towards the village of Wennington by warm winds amid the record-breaking 40.3C heatwave.

Despite the best efforts of 100 firefighters, as many as 19 homes in Wennington were gutted by the fire, with some families later revealing how they ‘lost everything’ in the blaze.

The sheer volume of wildfires across the country prompted firefighters to issue a warning to the public that wildfires will likely break out every three years as they said the destruction of homes should be a climate change ‘wake-up call’ to the UK.

The Met Office’s Mike Kendon said: ‘Temperatures on July 18 were exceptional but they moved 2 to 4°C higher on July 19, making this date unprecedented in the context of long term climate records.

‘What’s particularly notable is how much more widespread the heat was from this event than the previous two occurrences of temperatures in excess of 38°C in the UK.

‘Temperature records tend to get broken by modest amounts and by just a few stations, but the recent heat broke the national record by 1.6°C and across an extensive area of the country from Kent to North Yorkshire and from Suffolk to Warwickshire.

‘Even when you factor in the temperatures seen in summer 1976, they didn’t reach anywhere near the levels seen this week, although that was a much more prolonged spell of hot and dry weather.’

The heat resulted in the Met Office issuing its longest-range Amber warning ever, with a lead time of six days and a subsequent Red warning for extreme heat; the first such one to be issued.

‘The chances of seeing 40C days in the UK could be as much as 10 times more likely in the current climate than under a natural climate unaffected by human influence.

‘The likelihood of exceeding 40C anywhere in the UK in a given year has also been rapidly increasing, and, even with current pledges on emissions reductions, such extremes could be taking place every 15 years in the climate of 2100.’ 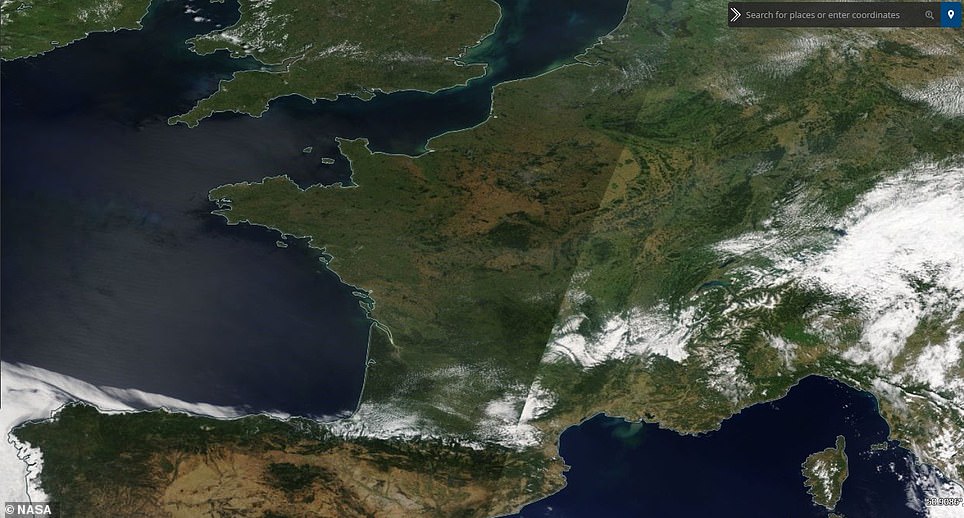 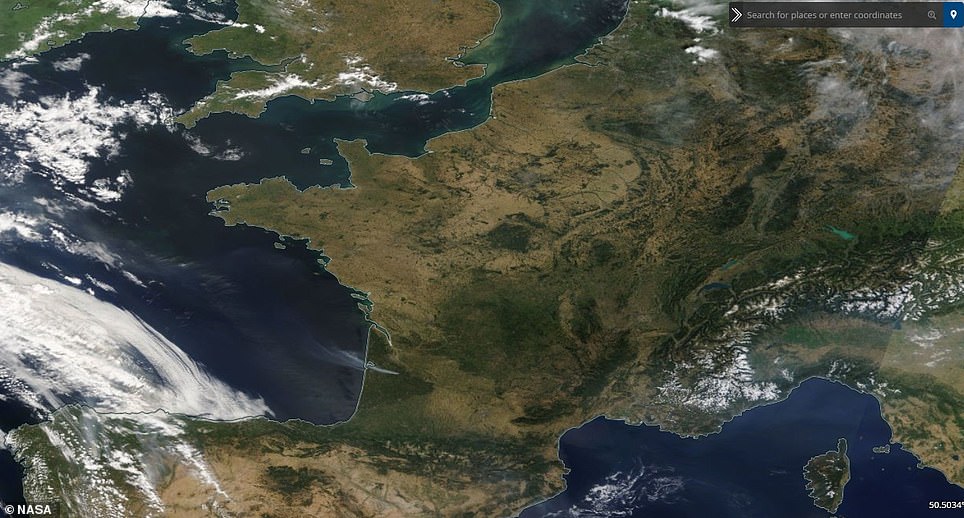 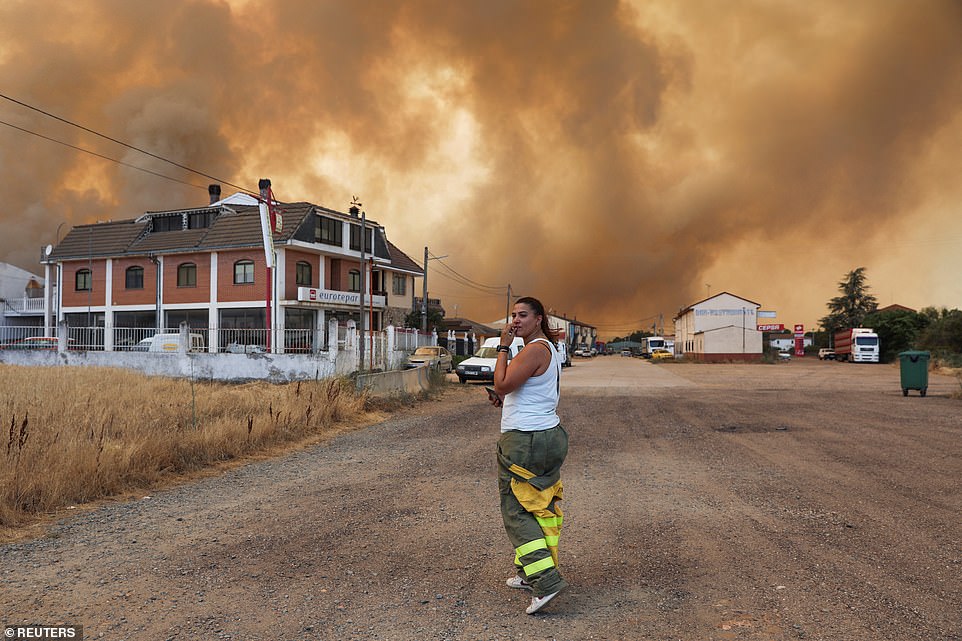 Firefighter from the Brigadas de Refuerzo en Incendios Forestales reacts as the fire reaches near Tabara, Zamora, in Spain 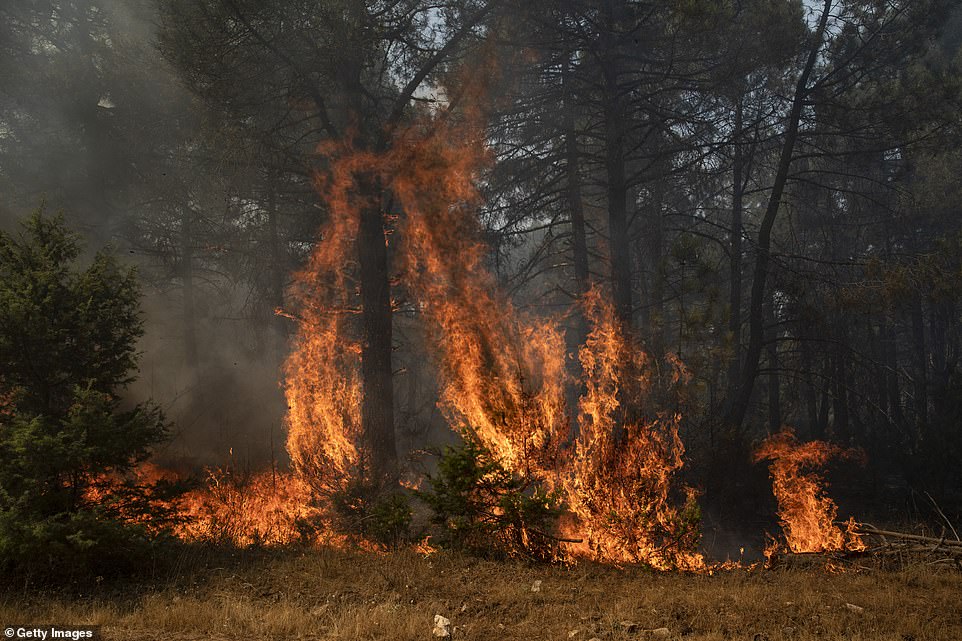 Inferno: Flames burn through wood and grassland in Cebreros, Spain, where hundreds of firefighters battled dozens of blazes

In France, wildfires blazed in southwestern Gironde region, burning roughly 47,700 acres as of July 19 forcing an estimated 34,000 people to be evacuated.

Meanwhile, in Greece, wildfires broke out north of Athens with more fires near the city of Megara, west of Athens, and on the island of Salamina.

In Italy, more than 5,000 acres were destroyed after a fire started on July 20 near Carso and spread across the border to Slovenia.

In Tuscany a fire destroyed 1,606 acres and 500 people were evacuated after some liquified gas tanks exploded.

Two people were killed in Portugal, after a wildfire ripped across Murca municipality consuming roughly between 24,711 to 29,653 acres.

In Spain this week, more than 30 wildfires were still ravaging parts of the country as authorities focused on blazes in Castile and Leon and Galicia.

Earlier, a fire broke out in Zamora province and scorched at least 49,421 acres of land and prompted to evacuate 11 villages.