Muslims ‘have the right to kill millions of French people’, Malaysia’s former PM says after church terror attack in Nice

Malaysia’s former prime minister said today that Muslims have a right ‘to kill millions of French people’, shortly after a knife-wielding man launched a deadly attack in Nice.

Mahathir Mohamad, who was PM of Muslim-majority Malaysia until his government collapsed in February, launched his extraordinary outburst after three people were killed at a church in the latest terror attack to bring misery to France.

The 95-year-old politician said he did not approve of the beheading of a French school teacher for sharing Prophet Mohammed cartoons, but said that freedom of expression does not include ‘insulting other people’.

‘Irrespective of the religion professed, angry people kill’, said Mahathir, who has drawn controversy for comments about Jews and LGBT people in the past.

‘The French in the course of their history [have] killed millions of people. Many were Muslims.’

In a tweet which has since been removed for violating the website’s rules, Mahathir went on: ‘Muslims have a right to be angry and to kill millions of French people for the massacres of the past.’ 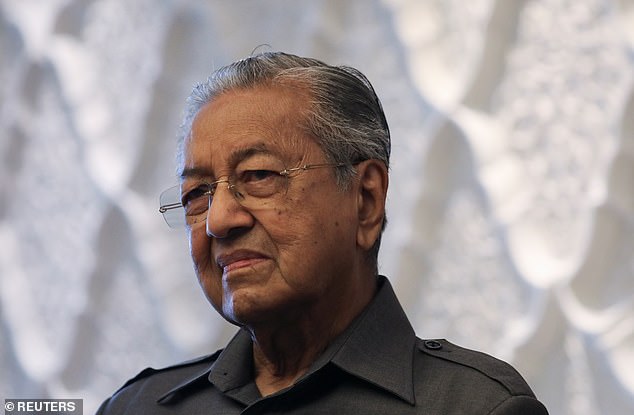 Malaysia’s former PM Mahathir Mohamad, pictured in Kuala Lumpur earlier this month, said that Muslims ‘have the right to be angry and to kill millions of French people’

Mahathir went on to say that ‘by and large’, Muslims have not applied the principle of ‘eye for an eye’.

Mahathir, who served as Malaysian premier twice for a total of 24 years, said that France’s Emmanuel Macron was ‘very primitive’ and ‘not showing that he is civilised’.

‘The French should teach their people to respect other people’s feelings,’ he said.

‘Since you have blamed all Muslims and the Muslims’ religion for what was done by one angry person, the Muslims have a right to punish the French.

‘The boycott cannot compensate the wrongs committed by the French all these years.’

The former PM made no direct reference to the Nice attack, but his comments come amid widespread anger at France in the Islamic world.

The beheading of the teacher, Samuel Paty, prompted Macron to promise a crackdown on Islamic extremism.

Macron and others have also launched a full-throated defence of freedom of expression and the right to mock religion.

But the move has inflamed tensions, with protests against France erupting in several Muslim countries, and some urging a boycott of French goods. 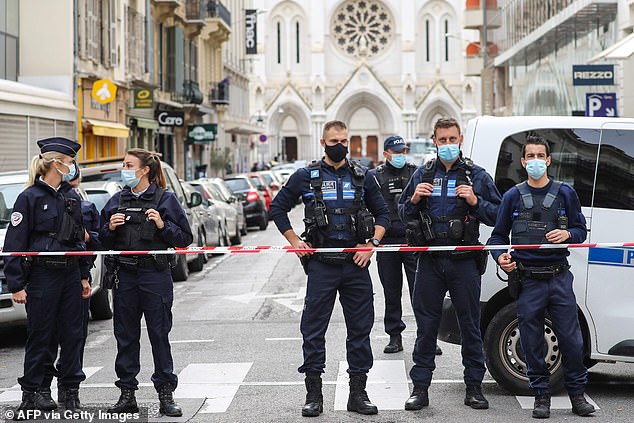 The two recent attacks are the latest in a long line of terror attacks in France in recent years, including the Charlie Hebdo massacre in 2015

French politicians lined up to demand tougher action against Islamist terrorism today after the triple murder in Nice.

Estrosi said today that ‘enough is enough… it’s time now for France to exonerate itself from the laws of peace in order to definitively wipe out Islamo-fascism from our country’.

One of Macron’s party colleagues called for ‘total mobilisation’ against extremism in what another called a ‘war that the Islamists are waging on our nation’.

Within hours of the Nice attack, a gunman had been shot dead by police in Paris while a knifeman was arrested for attacking a guard at a French consulate in Saudi Arabia.

Speaking in parliament, where he had earlier been talking about France’s new lockdown, Castex said the Nice attack was ‘as cowardly as it is barbaric’.