Elon Musk is asking a California judge to throw out a lawsuit filed against him by a British diver the tech entrepreneur called a pedophile on Twitter, arguing that it was nothing more than a ‘schoolyard spat on social media’ that no reasonable reader took seriously.

Musk’s motion to dismiss, filed in court on Wednesday, argues that ‘the public knew from the outset that Musk’s insults were not intended to be statements of fact.’

It adds that Twitter is ‘infamous for its invective and hyperbole’ and claims the comments were ‘imaginative attacks’.

Musk called diver Vernon Unsworth a ‘pedo’ in a tweet to 22.5 million followers after Unsworth criticized Musk on CNN in July, saying his efforts to help rescue young soccer players trapped in a cave in Thailand amounted to ‘a PR stunt.’ 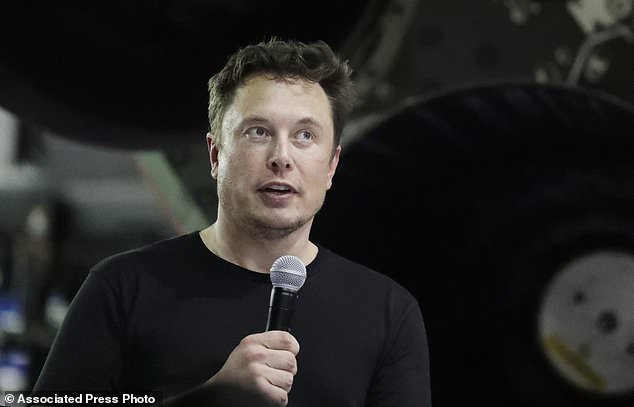 Musk is asking a California judge to throw out a lawsuit filed against him by a British diver who accused the tech entrepreneur of falsely calling him a pedophile. A court filing Wednesday, Dec. 26, 2018, argues that ‘the public knew from the outset that Musk’s insults were not intended to be statements of fact.’ File photo

Musk and engineers from his rocket company, SpaceX, built a small submarine and shipped it to Thailand to help with the rescue.

The device wasn’t used and Unsworth said on CNN that it wouldn’t have worked to free the boys who were trapped in the flooded cave.

He added: ‘(Musk) can stick his submarine somewhere where it hurts.’

Musk later deleted his tweets about Unsworth and apologized, tweeting that his words were ‘spoken in anger’ and that the sub was built out of kindness according to specifications from the dive team leader.

But on Aug. 30, Musk emailed a BuzzFeed News reporter, suggesting he investigate Unsworth and ‘stop defending child rapists,’ according to the lawsuit.

‘He’s an old, single white guy from England who’s been traveling or living in Thailand for 30 to 40 years,’ Musk wrote, adding that Unsworth moved to Thailand ‘for a child bride who was about 12 years old at the time,’ according to the lawsuit. 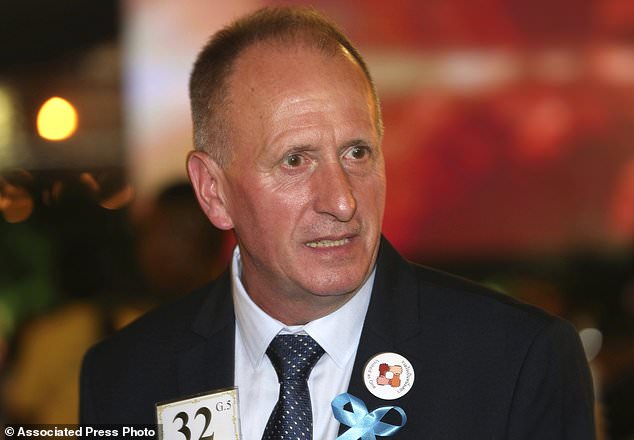 Musk called diver Vernon Unsworth (pictured) a ‘pedo’ in a tweet to his 22.5 million followers after Unsworth criticized Musk’s efforts to help rescue young soccer players trapped in a cave in Thailand

Unsworth lives in Thailand with his ‘significant other,’ a 40-year-old woman, and started going to Thailand in 2011 to explore and map caves, the lawsuit said.

Musk’s motion to dismiss argues that the email to BuzzFeed was supposed to be off the record, but the news outlet reported at the time that its reporters had made no such agreement – a standard practice among journalists before publishing anything without attribution.

‘While many readers criticized Musk for lodging what they understood to be groundless accusations, not a single reader seemed to construe Musk’s statements literally,’ Musk’s attorneys wrote. 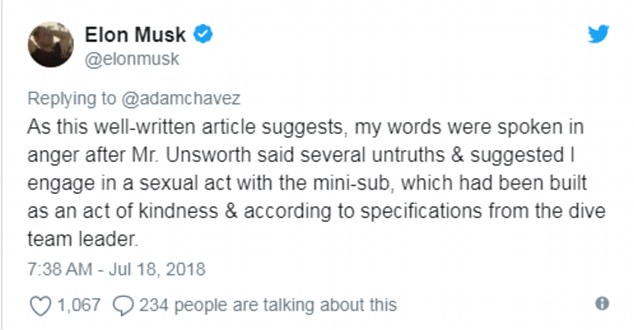 Musk later apologized on Twitter, claiming his words were ‘spoken in anger.’ The tech boss is now asking to have the lawsuit dismissed

WHAT WERE ELON MUSK’S OUTBURSTS LEADING UP TO ‘PEDO GUY’ COMMENT?

In July 2018, Musk attacked British diver Vern Unsworth, who had dismissed the Tesla chief’s efforts to help the rescue mission for the 12 boys as a ‘PR stunt’ in a widely seen interview on CNN.

Musk, without providing any justification or explanation, referred to Unsworth as ‘pedo guy’ in a since-deleted tweet. ‘Pedo’ is short for pedophile.

Unsworth told AFP he had not reviewed the tweets in full and had only heard about them.

But asked if he would take legal action against Musk over the allegation, Unsworth said: ‘If it’s what I think it is yes.’

Musk also denied giving donations to a political action committee dedicated to helping the Republicans maintain control of the house.

This was despite the Federal Election Commission releasing annual filings this week showing Musk as one of the top 50 donors.

While Musk has described himself as ‘half Democrat, half Repulican’ in the past, it struck many as hypocritical that a green energy CEO would donate nearly $40,000 (£30,700) to help keep in power a political party that has largely ignored or denied climate change.

Despite the fact that publicly-available FEC documents prove his donations to the PAC, Musk tweeted afterward that ‘reports that I am a top donor of the GOP are categorically false’.

‘I am not a top donor to any political party,’ he said.

In the past few months, Musk has become embroiled in a series of spats with the news media.

He has chastised reporters for focusing on accidents of autonomous cars instead of their safety potential, and accusing one news organisation of being ‘relentlessly negative’ about Tesla.

Shares were pummeled in May after Musk abruptly cut off questions from Wall Street analysts over Tesla’s spending plans.

In an earnings call, he berated analysts for asking ‘boring’ questions and sidestepped questions about Tesla’s massive capital needs.

The billionaire branded one industry analyst a ‘boring bonehead’ during the bizarre session, saying another’s ‘questions are so dry they are killing me’.

He also alleged ‘sabotage’ at Tesla’s operations by an employee, who responded by claiming to be a ‘whistleblower.’

The Tesla CEO wrote a lengthy note to all of his staff stating that he had discovered someone working intently on causing malicious damage within the company’s ranks.

The attorneys are arguing that reasonable readers would not take any of Musk’s statements as objective facts but rather, ‘nonactionable opinion.’

‘Here, the reasonable reader would not have believed that Musk – without having ever met Unsworth, in the midst of a schoolyard spat on social media, and from 8,000 miles afar – was conveying that he was in possession of private knowledge that Unsworth was sexually attracted to children or engaged in sex acts with children,’ according to Musk’s filing.

Musk’s statements were simply ‘imaginative attacks,’ and even if they were offensive, such insults are protected by the First Amendment, the filing said.

‘(Readers) contemporaneously recognized Musk’s comments for what they were: over-the-top insults not driven by first-hand knowledge,’ it said.