This is the shocking moment a woman discovered a mountain lion preying on her elderly border collie in Sonoma County, California.

Rebecca Kracker shared the footage of the terrifying incident on Facebook last week after the wild animal dragged her dog, Sherman, out of her home by its neck.

The woman had left the sliding glass door to her home open on November 28 and was playing with two of her other dogs in another room when she heard Sherman suddenly yelp and growl.

In the post, Kracker said she responded quickly, thinking her animal had fallen and gotten hurt, but soon realized ‘the horrible truth of the matter’. 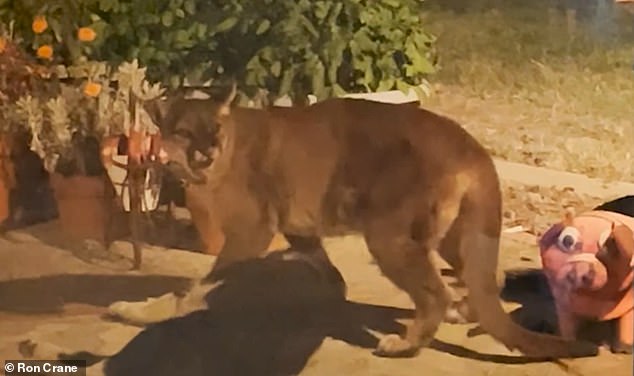 This is the mountain lion that preyed on a woman’s border collie on November 28 in Sonoma County, California 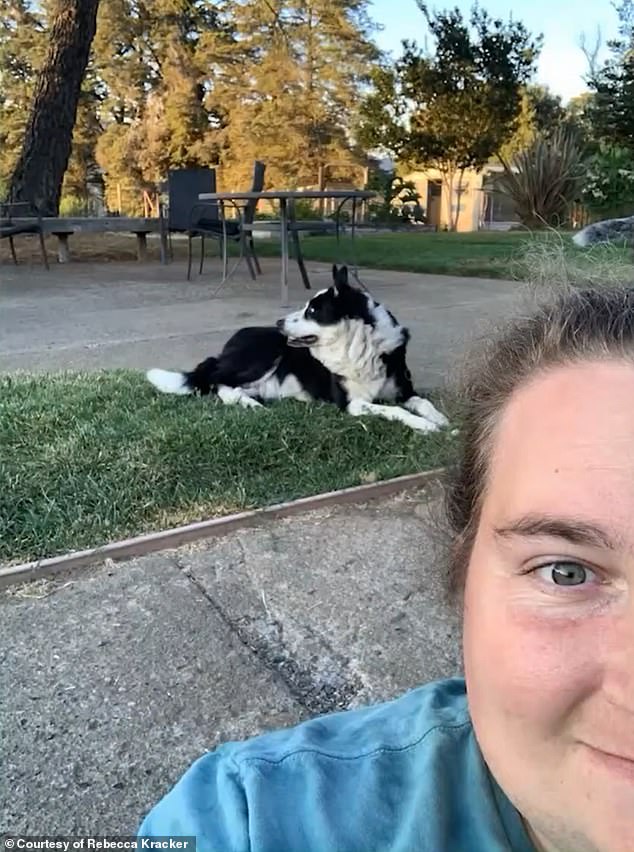 Rebecca Kracker’s border collie, Sherman, was dragged out of her Northern California home by the animal, identified as P1

The woman said her dog was moving oddly, ‘like he was convulsing,’ and saw the mountain lion drag Sherman out of the house, where he remained motionless on the ground in the back yard.

Realizing she was just feet away from the dangerous animal, Kracker said she quickly closed her door to try and prevent the lion coming back inside.

In her post, Kracker said she then called her neighbors to alert them and began filming at the suggestion of family members.

‘That’s my dog, just laying on the ground. It was just pulled out of the house by that f**king mountain lion,’ she says in the video.

The mountain lion appears to watch Kracker as she films, rarely looking down at the dog located near its feet.

Kracker’s other dogs bark in the background as she records, which the mountain lion seems to respond to by jerking its head. 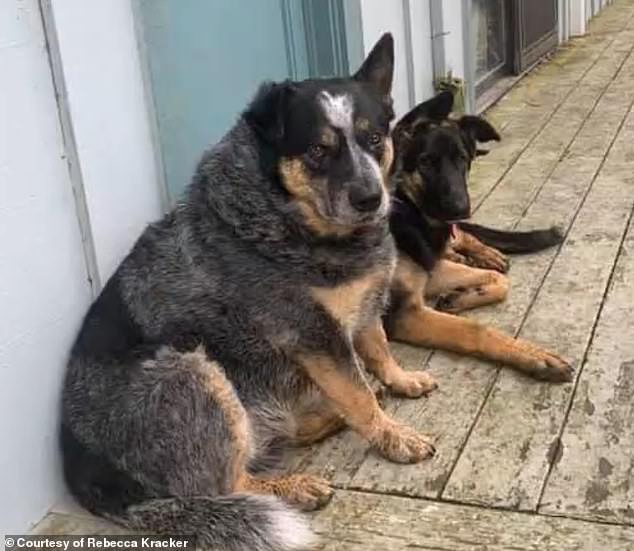 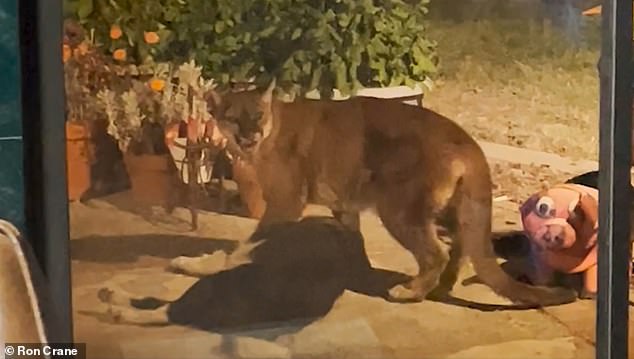 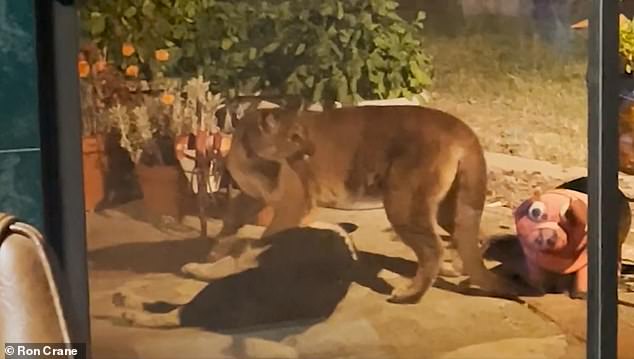 Thankfully, a neighbor went over to the house and fired a shot at the mountain lion. It missed but the bang caused the big cat to scurry away.

Startled by the loud noise, Sherman also jumped to his feet, leaving Kracker and her neighbor ‘stunned.’

Kracker said: ‘Miraculously he was not wounded except for a small wound on his lip. He was shocky and barely responsive for several hours, but every time I checked on him, he would wag his tail to let me know he was okay.’

One neighbor who spoke with KRON told the local outlet Kracker ‘thought it [Sherman] was a goner for sure.’ 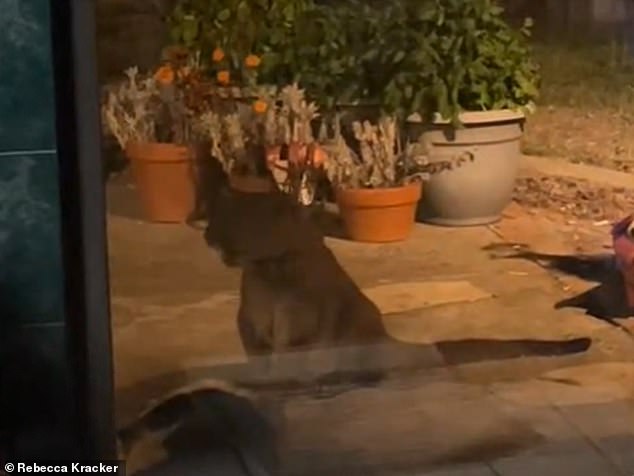 In video posted by Kracker, the animal sat right outside of the woman’s sliding glass door while standing guard over the dog 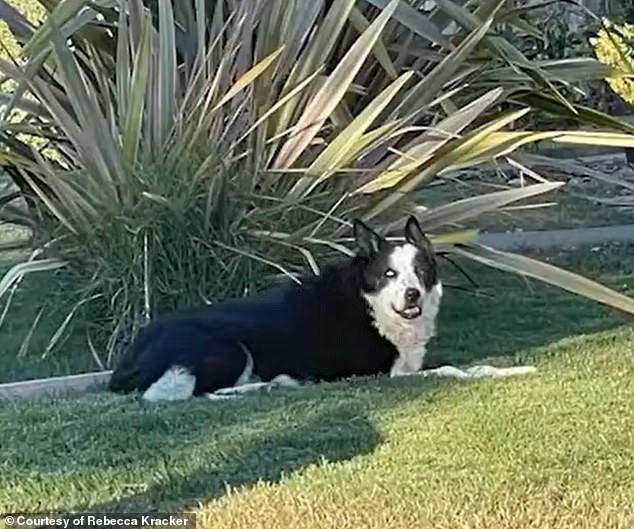 Kracker called animal control officials who told her they couldn’t do anything because the animal was no longer actively hurting or attempting to hurt her dog.

This response came after Kracker had already moved her other animals inside following the death of a buck days before. She said she hoped moving the animals into her larger barn would ward off any dangerous predators.

‘I never thought the mountain lion would be bold enough to enter my home to take my 70 lb border collie,’ Kracker said.

A day after the incident with Sherman, the big cat returned to the property and killed two of the Kracker’s goats. 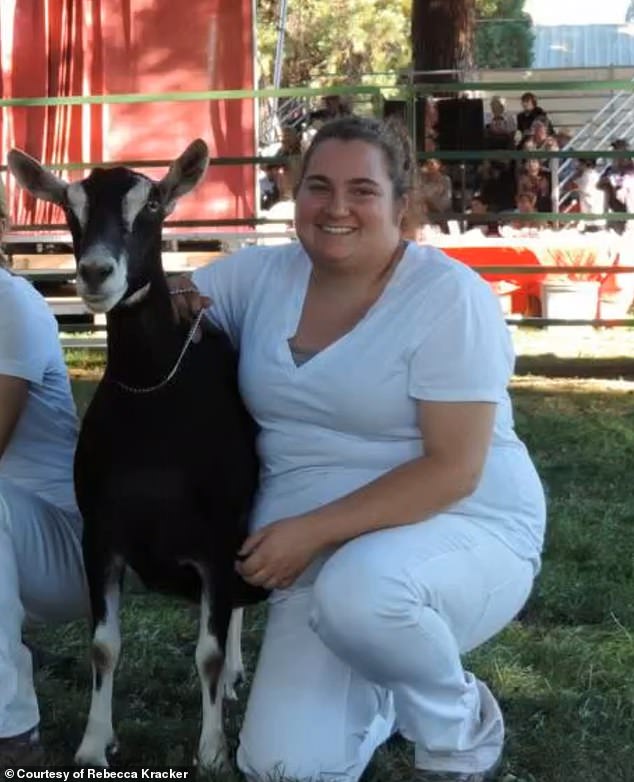 Kracker, who owns several different types of animals, said two of her goats were killed by the same animal just a day after the run in with her dog

After the goats were killed, wildlife officials responded and euthanized the animal, who had been tagged by local officials.

According to officials with the Audubon Canyon Ranch, the environmental group which was ‘tracking’ the animal, the mountain lion was a 16-year-old female cougar known as P1.

Officials from the organization said P1 was ‘unusually old’ and displayed behavior that’s not common for mountain lions.

They told local media they are ‘saddened’ by P1’s death but ‘believe that the lethal removal of P1 was the right course of action.’ 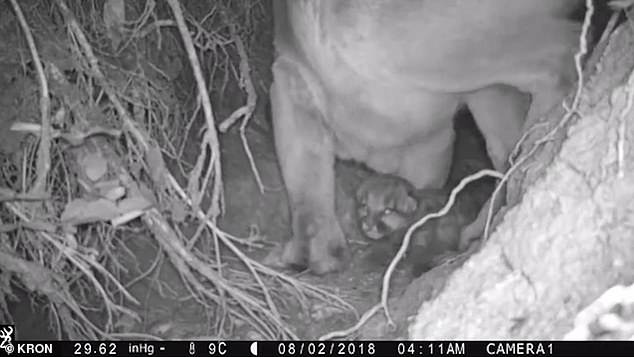 P1, seen here with cubs, had been tagged and ‘tracked’ by a local environmental organization 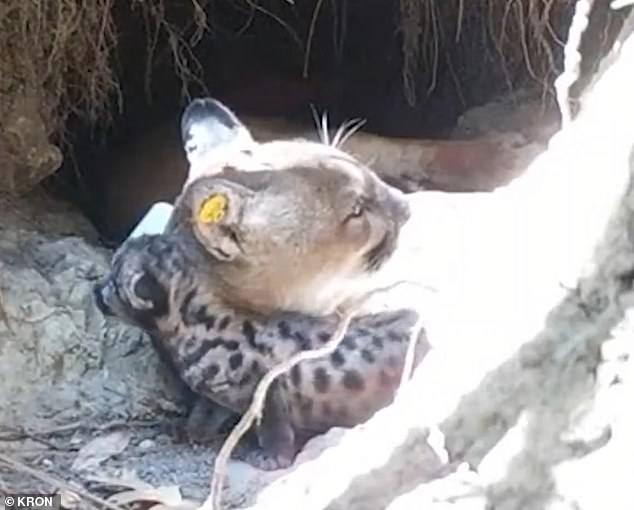 The animal was euthanized after the November 28 incident

Living with Lions investigator Dr. Quinton Martins said in a statement: ‘Clearly, something was wrong with P1. She was very old for a mountain lion which may have led to issues related to aging including tooth wear, slowed responses, weakened senses, and possibly other health issues.

‘In recent weeks, she was more willing to put herself near human activity with people having frequent sightings of her, as well as feeding almost exclusively on livestock, all of which is very unusual behavior.’

Despite the response from Audubon Canyon Ranch, some in the area are still upset the situation went on as long as it did.

‘That could have easily have been a kid,’ a neighbor told KRON. ‘The local activist organization knew this cat had erratic behavior problems for a while. I’m a local rancher. The public needs the whole story.’