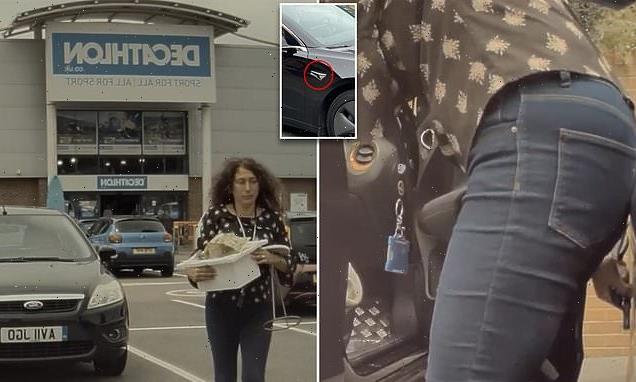 Motorist was caught keying a £50,000 Tesla car by the vehicle’s onboard cameras in the first prosecution of its kind in Britain

This is the shocking moment a motorist was caught keying a £50,000 Tesla by the expensive vehicle’s onboard cameras in the first prosecution of its kind in Britain.

Anna Valente, 57, was upset to find the electric car had tightly-parked close to hers outside a shop in a retail park in Poole, Dorset.

It is thought she had deliberately parked her Nissan Juke on the white line of a space to put off someone else parking next to it as she had left her pet dog in the front seat.

With her back to the £50,000 Tesla, Valente very slyly used her own car key to slash the other vehicle’s passenger side door, causing over £1,000 damage.

The 4ins long scratch was only spotted by the Tesla’s owner after his wife drove it home.

He looked at the footage stored on the vehicle’s hard drive to find its four cameras had recorded Valente carry out the malicious act.

The camera positioned at the front windscreen filmed her clearly walking from a shop towards the two vehicles, while the one on the front side indicator captured her keying the door of the 2020 Tesla Model 3.

Crucially, the camera on the back picked up her car registration plate which enabled police to trace Valente and charge her with criminal damage, which she pleaded guilty to.

It is believed to be the first prosecution in Britain where the sensory cameras on a Tesla have been used as evidence in a case.

Anna Valente, 57, was understood to have been upset to find the £50,000 Tesla Model 3 had tightly-parked close to hers outside a shop in a retail park in Poole, Dorset 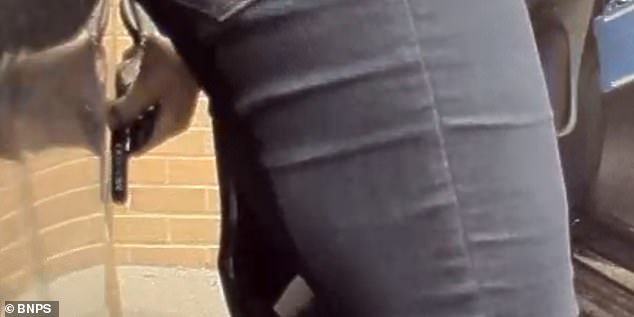 As she appeared to put her shopping away with one hand, she used the other behind her back to hold a key (pictured above) that scratched into the side of the Tesla’s paintwork

The owner of the Tesla wishes to remain anonymous but works as an air traffic controller and is aged in his 50s.

At the time of the offence on June 20 this year his 50-year-old wife had been driven the car to the retail park in Poole, Dorset.

She pulled up alongside a black Nissan Juke, owned by Valente, which was parked over the white lines of the bay.

Minutes later, Valente was caught on camera leaving a Homesense store and walking towards her car, stopping between the two vehicles.

The car’s footage shows her put her shopping away before placing her right hand on her own passenger door, while her left grips the key which she used to scratch the Tesla’s paintwork.

Running her hand down the side of the door, Valente then returns to the driver side, switches on the ignition and calmly drives away. 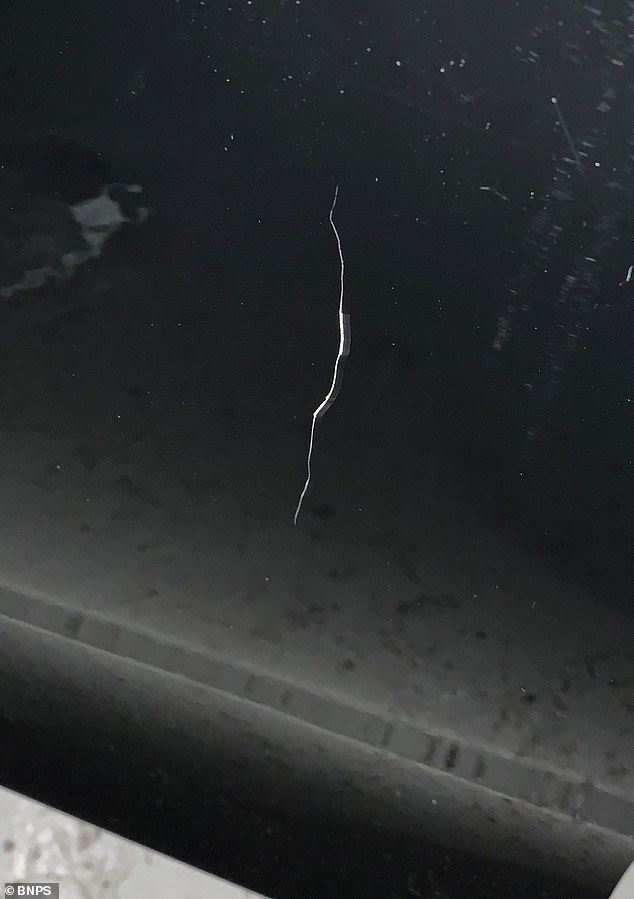 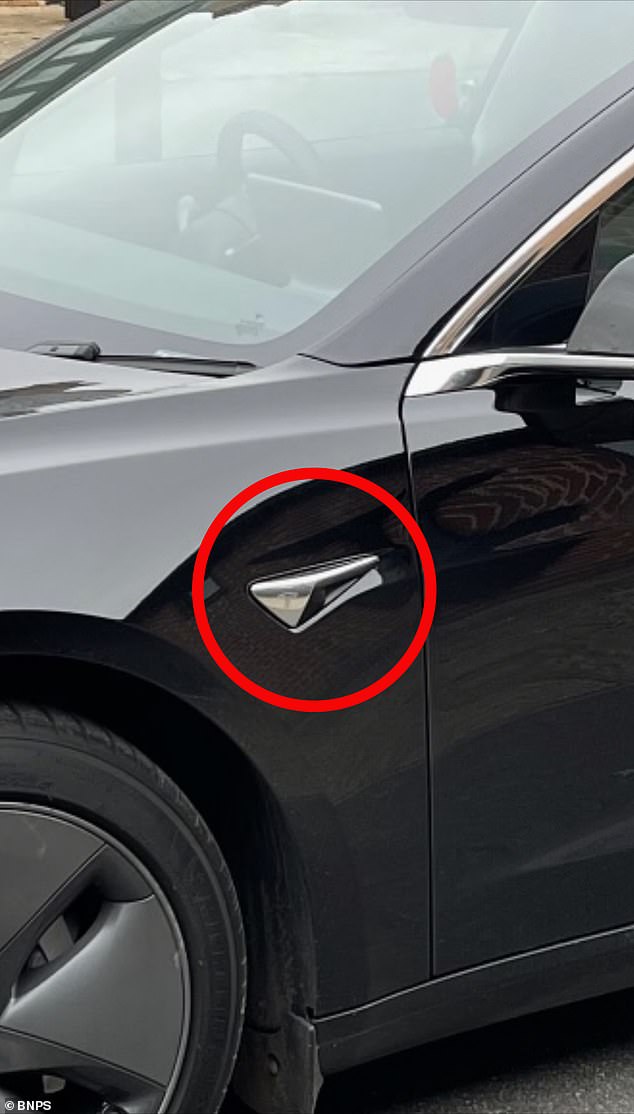 The owner said: ‘When my wife arrived home and parked the car in the drive I saw the scratch on the passenger door and asked what had she done to the car?

‘She had no idea. I took the hard drive out of the Tesla and plugged it into a computer and downloaded all the video files.

‘I felt a bit like a modern day Sherlock Holmes when I found the incriminating footage.

‘I was stunned and amazed when I saw it. Miss Valente seemed very confident in the way that she did it.

‘My wife was upset that somebody could do that to us but I was glad that I had idenified the woman to the extent that I could catch them.

‘Neither my wife or I know Miss Valente and have never spoken to her so I don’t know why she did it.

‘All I can think of is that she had parked her car right on the white line and she had a pet dog in the passenger seat so perhaps she didn’t anyone parking next to her.’ 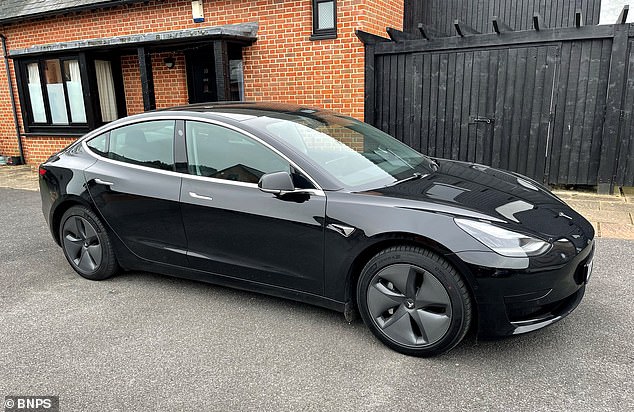 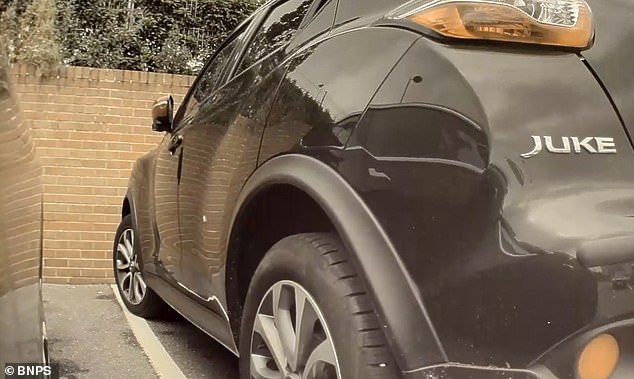 He added: ‘There are four cameras on a Tesla that have a dual purpose. They are sensory cameras for self-driving the vehicle should that be allowed and the other is for security.

‘I think this is the first time in the UK where images from a Tesla has been used in a criminal prosecution.

‘Police told us usually when people scratch cars it is almost impossible to get anything done. Car park cameras are normally positioned too far away. The system on the Tesla is great.

‘I knew the car had something like this but I didn’t know how good it was.’

Explaining the chain of events, he added: ‘My wife arrived at the car park and reverse parked alongside a black Nissan Juke. The footage shows how the Nissan was parked right on the white line, I suspect to try and deter anybody from parking alongside.

‘Approximately two minutes after the Tesla had been parked, the forward facing camera through the windscreen captures Miss Valente leaving the Homesense store and walking across the car park toward the rear of her vehicle parked alongside us.

‘She walks between the two vehicles then places her right hand upon her own passenger door and at the same her key appears from behind her body in her left hand and make contact with the Tesla’s paintwork.

‘She runs the key down the paintwork of the door. It is absolutely clear what has happened. She then returns to the driver’s side of her vehicle and drives away.

‘The camera on the wing mirror showed her putting stuff in the passenger side of her car before she keyed the car.’

‘The defendant was identified from the footage and subsequently was brought before the court to face the consequences for her actions.’

Valente, from Bournemouth, was given a six month conditional discharge by magistrates in Poole and ordered to pay £1,078.83 compensation, a £22 surcharge and £85 court costs.