A mother who took her children out of school during term-time to celebrate being free of cancer was fined £788 because she didn’t have an ‘exceptional’ reason.

Katie McDermott, 36, had to go through 18 weeks of chemotherapy and a double mastectomy after finding a lump in her breast in November 2017.

In October 2018, just under a year after her devastating diagnosis, doctors gave her the all clear, so she asked her children’s school for six days off so the family could go abroad.

She wrote the letter in December, but didn’t get a response, so booked the holiday to Tenerife for her, her husband Darren, 40, and their four children, assuming it would be okay.

But Central Lancaster High School only responded two days before they were due to travel – too late for them to re-book the holiday.

Teachers claimed the reason for the family getaway did not amount to ‘exceptional circumstances’ and she was later issued with a court summons, which led to a hefty fine. 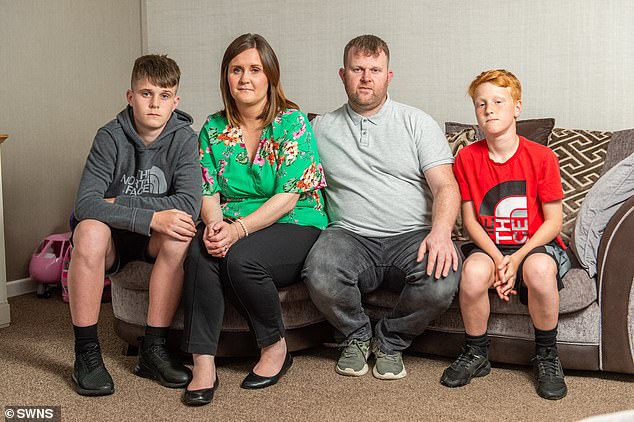 Katie McDermott, 36, and her husband Darren, 40, were fined £788 for taking two of their four children, Joseph, 14 (left), and Oliver, 12 (right), out of school to celebrate her being cancer-free

When they got home, the parents received a letter from the local authority, which passed the case on to Lancaster Magistrates’ Court, and a fine was issued.

After appealing the decision, last month the McDermotts, of Lancaster, were fined a total of £788 for taking their children out of school without permission.

The couple say their secondary school aged children, Joseph, 14, and Oliver, 12, have never applied for leave from their school before. 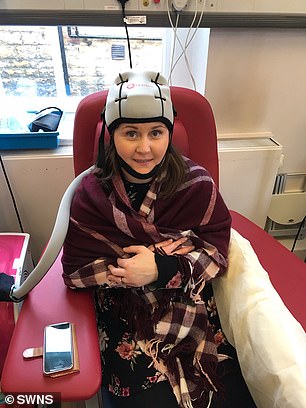 Mrs McDermott, 36, had to go through 18 weeks of chemotherapy and a double mastectomy after finding a lump in her breast in November 2017. Pictured during treatment

They added their five-year-old daughter Ava was given permission for holiday leave from her primary school without a problem and their youngest Ella, four, is still at nursery.

Mrs McDermott, who works for the NHS, said: ‘The kids have been so good throughout everything, it was really difficult but they kept going.

‘They have always gone into school and done their work without any problems at all.

‘The school have said they were model students and that we should be proud of them.

‘I really feel like they deserved this trip after everything they have been through.

‘The way we have been treated is really upsetting.’

Her husband, who works as a plumber, said the holiday was a surprise treat for the children to give them a chance to spend time with their mum after so much upheaval.

He said: ‘We have never taken the kids out of school before, it was just to take them away with Katie after all she had been through. 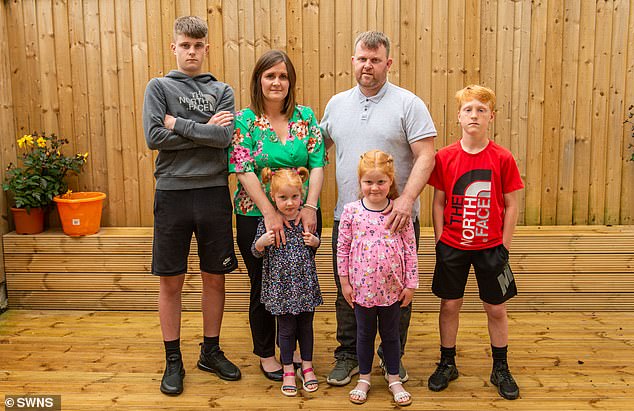 Katie and Darren (centre) say their five-year-old daughter Ava (bottom right) was given permission for holiday leave from her primary school without a problem and their youngest Ella, four, (bottom left) is still at nursery

‘We put a holiday request form in the day before the October half-term break.

‘We expected a decision the week back at school which would have given us plenty of time to change the holiday, which we would have done.

There has been an increase in the number of penalty notices from 149,300 in 2016/17, according to this year’s Department for Education figures.

‘But we didn’t get a reply from the school and it got to the week before the holiday and I said to Katie that we should ring the school, and when she rang it was as though they didn’t know what she was talking about.

‘A letter was then sent home that Thursday, when we flew on the Saturday.

‘It said we had not been given permission to take the boys out of school, but at that point it was too late, we didn’t have the chance to change it.

‘We are in a financial struggle after Katie’s treatment but it’s not the fine I am bothered about, it’s about how we have been portrayed as not really caring, which is totally untrue.

‘There just seems to be no consistency, we know of lots of people who have been authorised for holidays.’

The holiday was paid for by friends and family who hosted a fundraising event and donated the money towards a trip abroad.

The term-time dates were chosen by the family due to price constraints. 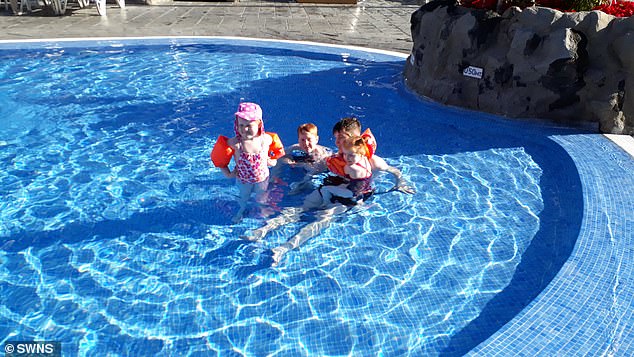 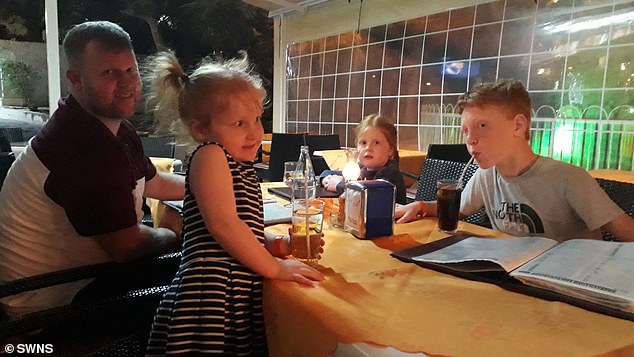 Mr McDermott said he spoke to the local authority, which confirmed it should have taken a few days for the school to respond to a holiday request.

He added: ‘Had the rejection letter come within a few weeks of the application, the family would have been happy to rearrange the holiday.’ 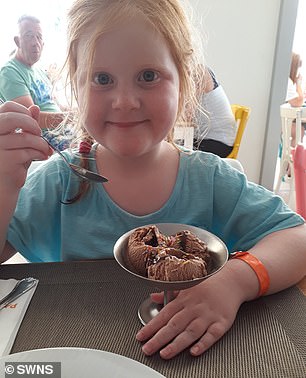 The letter, written by the school’s attendance officer and sent home with Joseph, actually arrived seven weeks later on November 29.

It said: ‘Parents may request a leave of absence in term time but this can only be authorised in exceptional circumstances.

‘I have discussed your request with the headteacher who does not feel this request is exceptional.

‘While sympathetic to your circumstances we are unable to set a precedent by authorising leave during term- time.’

Nicola Hall, head teacher at Central Lancaster High School, said: ‘As a school we empathise with the wide range of sensitive issues which require compassion and consideration in all of our families.

‘In accordance with regulations imposed by the government, the school has adopted a policy not to authorise term-time family holidays.

‘We recognise the importance of children being consistently in school to access their whole curriculum offer.

‘We hope all parents understand the limitations placed on schools in granting leave.’

The couple have been invited into school to speak to Mrs Hall. 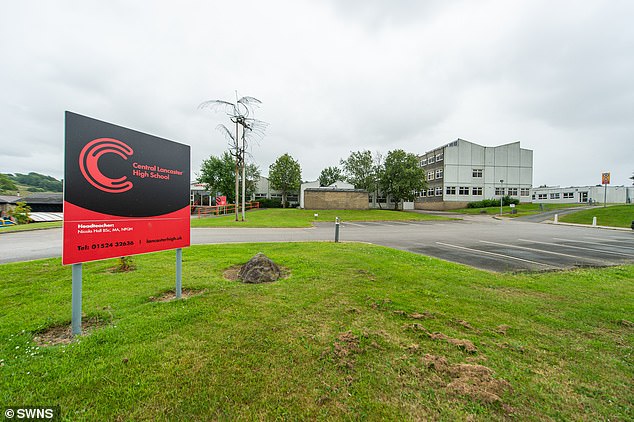 Teachers at Central Lancaster High School (pictured) claimed the reason for the family getaway did not amount to ‘exceptional circumstances’ and the couple were later issued with a court summons, which led to a hefty fine

What is the law on taking your children out of school during term time? How parents can face FINES or even JAIL for truancy 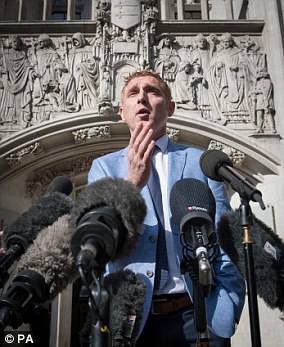 How have the rules changed over term time holidays?

It’s no secret that trips overseas soar in price during school holidays, tempting some parents to take their children away during the cheaper, term time price bracket.

However, in recent years ministers argued that missing any amount of school is detrimental to a child’s education. In 2013 the Department of Education overturned guidelines dating back to 2006 that meant head teachers could grant leave of absence of up to 10 days for the purposes of a family holiday in term time in ‘special circumstances’.

Parents who take their children out of school without permission during term time can incur fines of £60 per pupil, per period of absence – which rises to £120 if not paid within 21 days.

What was the impact in the change of rules?

Perhaps not surprisingly, large numbers of parents have ignored the new guidelines. But the Government and local councils have clamped down – hitting those parents who take their children away in term time on unauthorised absences with fines.

How have parents reacted?

The school absence reforms introduced in 2013 proved controversial, with critics arguing that they have the biggest impact on those who cannot afford high travel costs during school breaks and families with parents that work shifts.

Nearly 230,000 people have signed a petition calling for the fines to be scrapped and one group of parents founded the organisation Parents Want A Say to campaign against fines, arguing that many mothers and fathers believe they are being made to feel like criminals.

What do teachers say?

The National Union of Teachers warned that going on holiday shouldn’t be exclusive to the middle classes, and have said there are important cultural and social benefits to visiting new places.

Meanwhile the Local Government Association (LGA), which represents 370 councils across the country, has called for rules to be changed to give head teachers greater flexibility to allow parents to take their children on holiday during term time.

However, the National Association of Head Teachers (NAHT), have argued that term time is for learning and that families already had 175 days off school, including weekends and school holidays, to spend time together.

What is deemed an authorised absence?

Head teachers still have discretion over granting absence during term time. The NAHT guidance says an absence for the bereavement of a relative, or important religious observances could be deemed as exceptional circumstances.