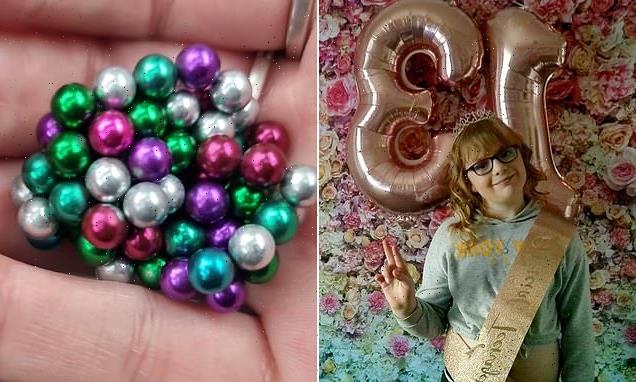 A terrified mother has told how she fears her daughter’s internal organs could be damaged after she accidentally swallowed magnets trying out a viral TikTok trend.

Kelly Sheldon, 33, said Tia, 14, had been through a ‘frightening’ ordeal, adding: ‘I don’t want any child or mother going through what I have this week.’

The mother-of-five, a full-time carer from Bacup, Lancashire, said the teen had initially stuck two magnetic balls together around her tongue at school, as part of a wildfire craze that spread on social media.

This sees similarly aged kids fix the colourful metallic orbs around their mouths, lips and nose to replicated the look of pierced jewellery worn by adults.

But Tia forgot to remove the magnets when she took a swig of water and was rushed to the hospital on the advice of NHS call handlers after they passed down her throat. 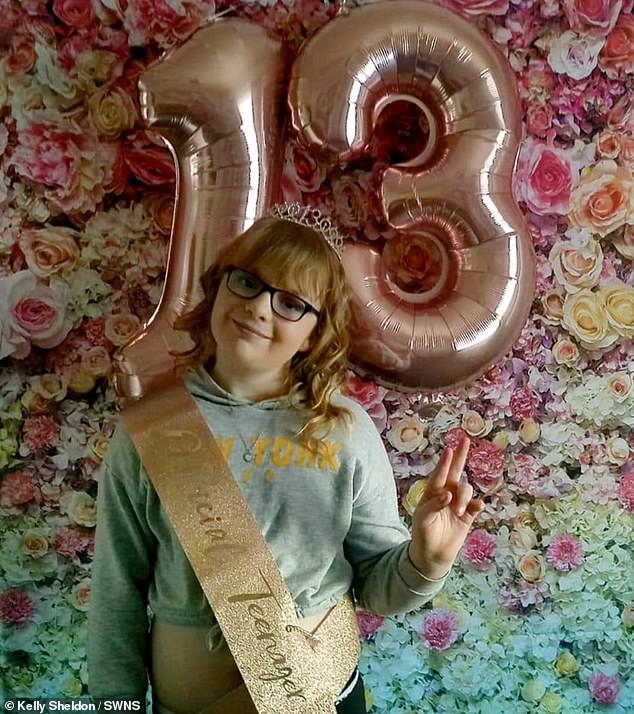 The NHS has called for a ban on tiny magnets which became exceptionally popular due to a TikTok trend.

Youngsters are balancing the beads in their mouths and using them as a fake piercings after they went viral on social media.

The magnetic balls are sold commercially but leading doctors are calling for them to be outlawed.

The NHS issued a patient safety alert after at least 65 children were admitted to hospital for urgent surgery in the last three years after swallowing magnets.

Ingesting more than one can be life-threatening, according to the NHS, as they magnetic objects join together in the intestines or bowels and cut off the blood supply within hours.

England’s top children’s doctor Professor Simon Kenny, paediatric surgeon and national clinical director for children and young people at NHS England, said: ‘Magnets are a source of fascination for children, and magnetic toys can look like a cheap and cheerful way of occupying the kids, but ultimately they aren’t safe and shouldn’t be for sale.

‘There is nothing fun for children or their parents about surgery to remove magnets that have been swallowed and become stuck together through different parts of the intestines, or the long-term physical problems and internal scarring that can be left behind.

‘I would urge parents to be aware of the dangers associated with magnetic toys but ultimately, the only way we can prevent future incidents is to stop these items being sold altogether.’

Teenagers, who are using magnetic balls as fake facial piercings, have been recently affected in addition to the younger age groups, with a rise in admissions amongst older children.

Unlike traditional magnets, these ‘super strong’ magnets, less than 6mm in diameter, are powerful in magnetism and can be easily swallowed.

One case involved 18-month-old twins, one of whom swallowed 23 magnets which closed into a loop and created a potentially lethal bowel twist. The toddler needed emergency surgery at Addenbrooke’s Hospital in Cambridge, where doctors were able to remove the magnets.

The trauma left holes in the child’s bowel which required stitching, but he has since recovered.

A precautionary scan found that his twin brother had also ingested four magnets, which necessitated keyhole surgery to remove.

X-rays revealed the magnets had fused together in the teen’s lower chest area and doctors said they’d hopefully pass out of her system naturally with time.

However, they also told Kelly that if the magnets did separate, they could go on to ‘pierce’ her organs, leaving the mum very ‘concerned’ for her daughter’s health.

She said: ‘If the two balls separated, and one travels further than the other but finds a connection again while it’s away, it could pull the organs together and squish them.

‘And that could easily pierce the intestine or cause a blockage. It’s very frightening.’

Kelly said she would now join with NHS bosses in calling for a full ban on the ‘creative toys’.

She added: ‘I don’t think any child of any age should have a magnet. I don’t think there’s any reason for them, I just think it’s a bad idea full stop..’

Full-time carer Kelly, from Bacup, Lancashire, said Tia and her other siblings had been banned from TikTok while at home.

So she was amazed to find out that her daughter had taken part in the viral trend while at school last Wednesday (Oct 12), after getting the magnets off a pal.

She said: ‘This kid had given her these magnets, and because she’s heard or seen this TikTok trend previously, Tia thought she’d try it.

‘She’s been walking from one lesson to the other, and without thinking, she’s had a drink of water, and it’s literally just washed down.

‘When the school rang me, I thought she’d swallowed a magnet in a maths or science lesson that morning.

‘So I got to the school as soon as I could, and it was when I got there that I was given these magnets and told what happened.’

Kelly said staff had been advised by ‘111’ call handlers that Tia would need immediate medical attention, so she took her to a hospital where she had body scans.

She said: ‘We went and got an X-ray eventually, and they were in her lower chest area, touching.

‘They said as they were touching, she was safe to go home. But we had to return for another x-ray the next day, in case she needed surgery.

‘That again showed they were still in her lower chest area, but instead of upright, they were more on the side slightly.’

Kelly said the hospital had notified her of some symptoms that might indicate a worrying development in Tia’s health.

But she said the youngster still wasn’t certain if the tiny balls had left her body, adding that she would only relax once she knew they had gone.

She said: ‘Obviously they’re quite small, little silver magnets, so to see them come out isn’t easy.

‘But she hasn’t reported to me or her dad that she’s seen them pass yet. So I think if she hasn’t seen them, and they haven’t passed, I’m just going to have to take her back.

‘I’m more than concerned, and I won’t relax for a fact until I know they’re no longer in there. ‘ 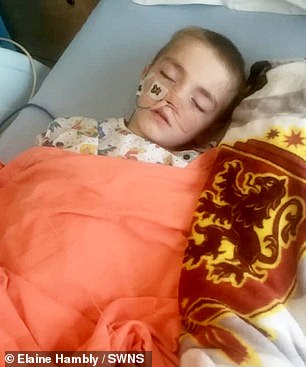 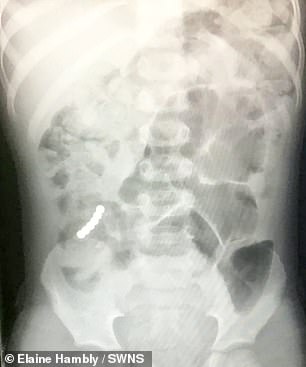 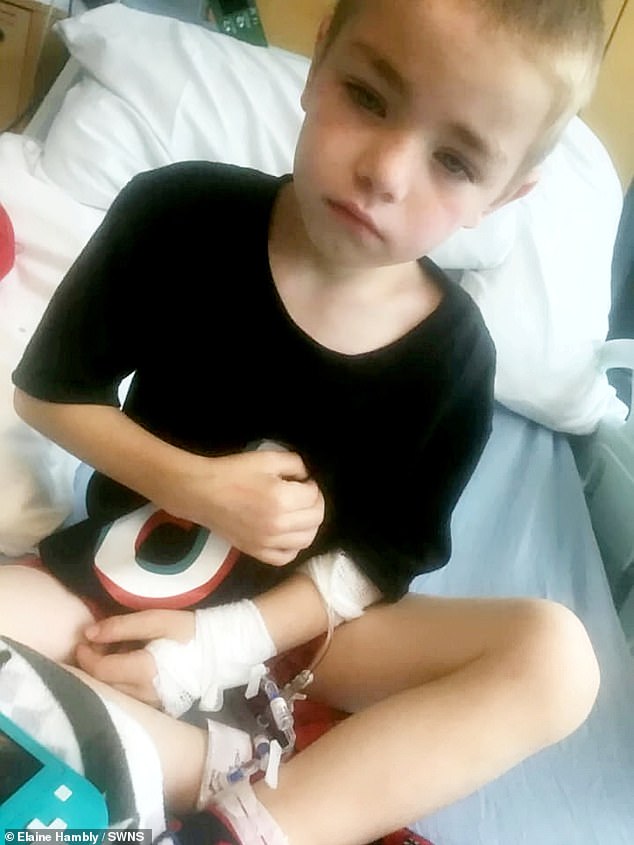 Mickey Hambly (pictured), seven, was left with three holes in his bowel after swallowing six strong magnetic balls, made popular by viral videos online that show their use in the construction of impressive structures

The news comes after a schoolboy in October last year had to have emergency surgery to remove six magnetic toys from his stomach after he accidentally swallowed them.

Mickey Hambly, from Margate in Kent, was rushed to A&E by his parents in the early hours of the morning when he began suffering agonising abdominal pain.

The seven-year-old was found to have three holes in his bowel, caused by the powerful magnetic objects that have been made popular online.

An X-ray clearly showed that lodge in his stomach were six tiny balls that his mother Elaine Hambly had bought him for his birthday.

The round, coloured magnets are hugely popular toys used as building blocks, with viral YouTube videos that have racked up tens of millions of views show them being shaped into impressive structures, such as buildings and animals.