A teaching assistant has been branded ‘heartless’ over a complaint that McDonald’s did not turf out a ‘smelly’ homeless man – but she claims a hacker posted the rant.

Mother Lisa Whiter, from Windsor, Berkshire, has been forced to delete her Facebook account after the post went viral and she was subjected to a torrent of abuse from outraged social media users.

In the post, Lisa appeared to moan that the manager of the fast food giant’s Bath Road, Slough, branch failed to throw out the homeless man after he was pointed out. 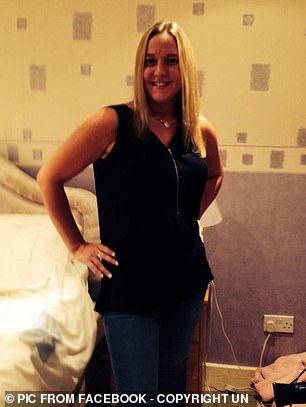 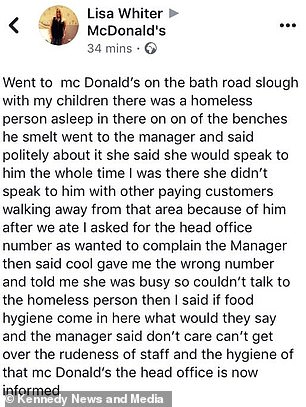 Mother Lisa Whiter, from Windsor, Berkshire, has been forced to delete her Facebook account after the post went viral and brought a torrent of abuse – but she now claims she was hacked

Lisa appeared to criticise the store for putting ‘food hygiene’ at risk and ranted that their head office had been informed.

However when members of the public voiced their disgust at the post, it was swiftly removed and Lisa blamed the rant on her account being ‘hacked’.

Other customers praised the McDonald’s staff for not demeaning the sleeping man by kicking him out of the restaurant when he was only ‘trying to find somewhere safe and warm’.

Hundreds of commenters have now branded the original complaint as ‘vile’ and ‘horrid’, while other said they were ‘astounded by the lack of compassion’. 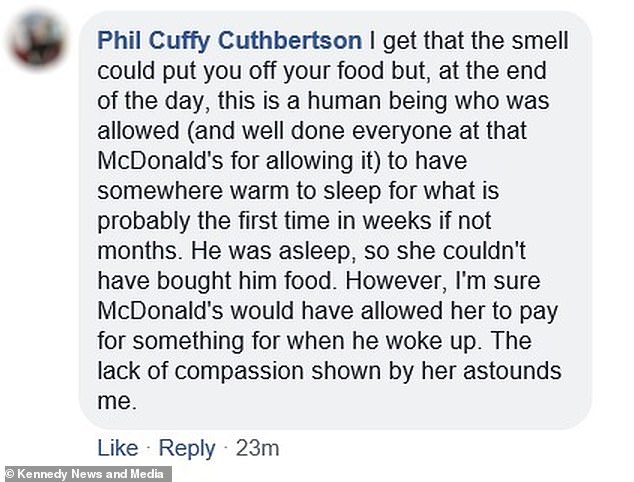 However when members of the public voiced their disgust at the post, it was swiftly removed and Lisa blamed the rant on her account being ‘hacked’

Lisa’s original post read: ‘I went to McDonald’s on Bath Road, Slough, with my children. There was a homeless man asleep in there on one of the benches.

‘He smelt. I went to the manager and said politely about it. She said she would speak to him.

‘The whole time I was there she didn’t speak to him with other paying customers walking away from that area because of him. 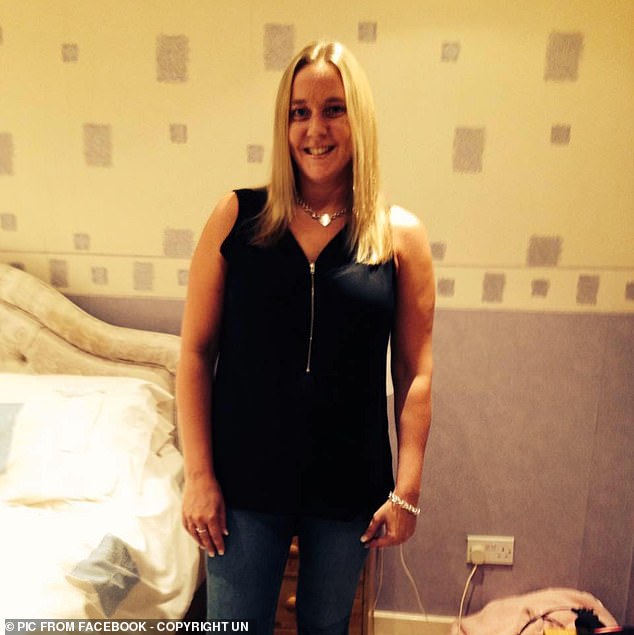 ‘After we ate I asked for the head office number as [I] wanted to complain. The manager then said cool [but] gave me the wrong number and told me she was busy so couldn’t talk to the homeless person.

‘Then I said if food hygiene [were to] come in here what would they say and the manager said don’t care.

‘[I] can’t get over the rudeness of staff and the hygiene of that McDonald’s. The head office is now informed.’

Rebecca Courtney, 31, came across the post being shared online and screenshotted it before Lisa deleted it. She shared the post to raise awareness of the issue, which particularly shocking to her since Lisa works with children. 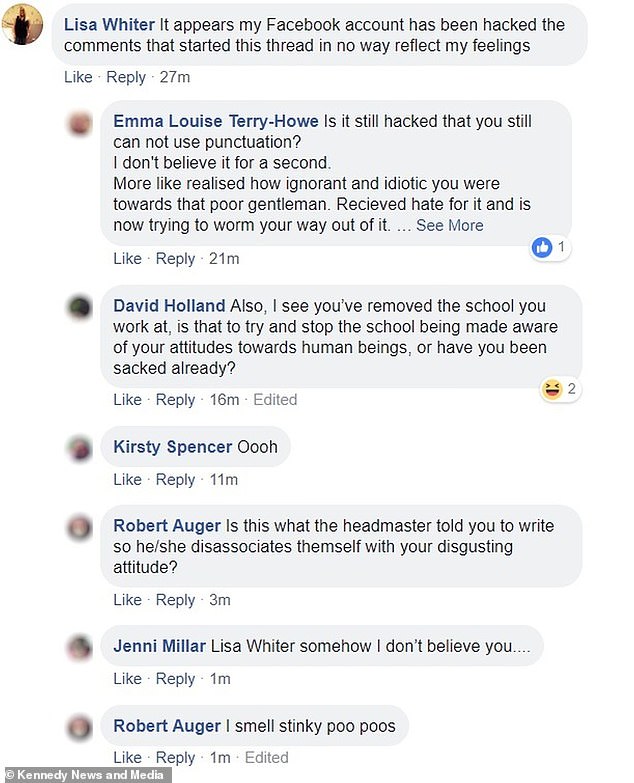 Rebecca, from Hull but living in Leeds, said: ‘[It made me] angry and disappointed.

‘We’re being advised that we’re going to have one of our coldest winters on record, it’s three weeks until Christmas and there is someone that regards another human being as such an inconvenience that she’d rather see them out on the street in the cold.

‘Children learn from the actions of their parents – all this does is show another generation that this is an issue that can be swept under the carpet. It’s an ‘I’m alright, Jack’ situation.

‘I’d like to make it clear, I certainly don’t want anyone to lose their job or get into trouble regarding this post. She clearly has a family to feed.

‘But this woman is a direct influence on primary school aged children, yet she’s attacking someone who is probably at their lowest ebb in life.’

However Joshua, who claims to be Lisa’s son, defended her and said that people on social media are too quick to believe what they read, despite the post being made by a hacker

However Joshua, who claims to be Lisa’s son, defended her and said that people on social media are too quick to believe what they read, despite the post being made by a hacker.

Joshua said [punctuation added]: ‘As Lisa’s son, she has been hacked. She would have never have thought to put a post up like that at all!

‘This is the problem with humans now, they are soon quick to jump of their high horse when they see something on social media.

‘There even more reason she wouldn’t write a status like that because myself with the company I work for we going nearly four nights a week once we finish our shifts to provide medical aid and advice to the homeless.

‘So why doesn’t everyone start growing up and not believing everything they see on Facebook. Anyone can get into anyone’s account if they want too.[sic]’

Von Wallace said: ‘Where is people’s humanity and compassion ffs. It’s freezing out, let the poor man get warm and dry.’

Kirstie Walklate said: ‘You could’ve bought him a hot meal and a drink, instead you choose this entitled, vile behaviour. Shame on you.’

Leigh Casee said: ‘Horrid nasty cow. I hope she never ends up with a homeless family member!! How the hell does she teach kids?!?’

Phil Cuthbertson said: ‘I get that the smell could put you off your food but, at the end of the day, this is a human being who was allowed (and well done everyone at that McDonald’s for allowing it) to have somewhere warm to sleep for what is probably the first time in weeks if not months.

‘He was asleep, so she couldn’t have bought him food. However, I’m sure McDonald’s would have allowed her to pay for something for when he woke up. The lack of compassion shown by her astounds me.’

A McDonald’s spokesperson said: ‘We welcome all customers into our restaurants and the duration of their stay is at the discretion of the restaurant’s management team.

‘If the behaviour of any individuals in or around the restaurant prevents us from providing a safe and welcoming environment, then appropriate steps will be taken.’