Morrisville, Pennsylvania: Police found a Pennsylvania woman and her adult daughter in an apartment with the bodies of five relatives they had killed, including three children, authorities said on Tuesday.

Shana S. Decree, 45, and Dominique Decree, 19, were charged with five counts of homicide and one count each of conspiracy. 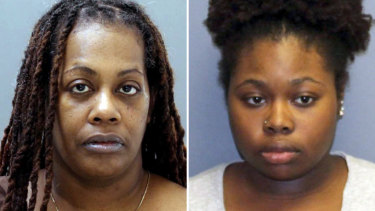 Shana Decree told police that "everyone at the apartment … wanted to die" and talked about suicide, according to court documents. Decree claimed one of the victims, Jamilla Campbell, 42, killed two other victims before she herself was slain.

The bodies were found Monday in an apartment in suburban Philadelphia after Bucks County child welfare officials showed up unannounced and got no response when they knocked on the door. A maintenance worker opened the door and found Shana Decree and Dominique Decree in a "disoriented" state, according to court documents.

Police arrived and found all five bodies in a bedroom. The apartment was in "disarray", according to police chief George McClay, with broken drywall and broken glass, overturned furniture, and other clutter. 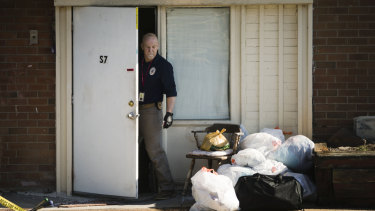 Investigators comb the scene of the five murders in a Morrisville apartment.Credit:AP

Shana Decree was arraigned early on Tuesday, while her daughter was expected to make her initial court appearance later in the day.

It wasn't clear whether either woman yet has a lawyer to speak for her.

The victims included Shana Decree's children Naa'Irah Smith, 25, and Damon Decree jnr, 13, both of Morrisville; as well as Shana Decree's sister Jamilla Campbell, of Trenton, New Jersey, and Campbell's nine-year-old twin daughters Imani and Erika Allen. Authorities did not reveal how they died.

Authorities who had been looking for Campbell's 17-year-old son Joshua found him in Willingboro, New Jersey, where he was staying with friends, McClay said. 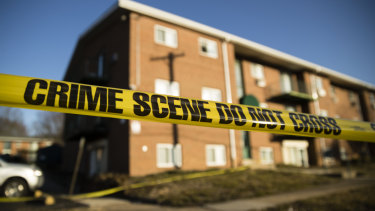 "We wanted to come out here at this point and make sure that everybody knew that the people that committed these atrocious acts are now in custody and will be made to pay for their crimes," Weintraub said at the scene late on Monday.

The bodies were found about 4pm Monday (local time) after police went to check on the welfare of residents at the unit in the Robert Morris Apartments in Morrisville, on the Delaware River northeast of Philadelphia and across from Trenton, New Jersey.

The three-story, red-brick complex is on a busy road lined with auto repair shops, a safe-and-lock shop and a bail bonds agency nearby.

Thai Hall, 24, of Bristol, Pennsylvania, said she attended Morrisville High School with Smith and spoke with her about three months ago. Hall, whose mother lives in a neighbouring apartment, said Smith was attending cosmetology school. She remembered Smith warmly.