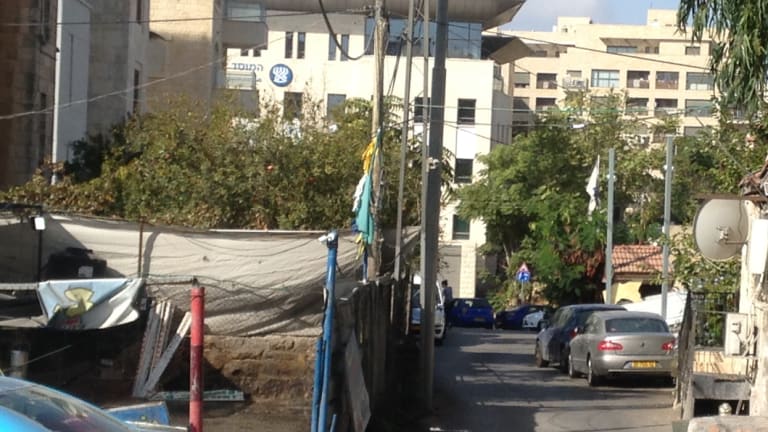 Kunder Street in Sheikh Jarrah, East Jerusalem. The Israeli flag can be seen on the right, hanging on the house from which the Shamasneh family were evicted in September 2017. Credit:Maher Mughrabi

My father was born in Jerusalem, and it was first divided into west and east when he was a child. His dorm window at boarding school looked out onto the no man’s land between the line drawn by Israelis and the line drawn by the Jordanian authorities at the end of the 1948 war. In 1967, when war broke out again, he was studying in Scotland and cut off from home. My family's house and the house the Shamasnehs lived in are both in Jerusalem's east.

What the flag opposite my family's house tells us is not simply that the people within are patriotic Israelis. It tells us that their occupation of this house is a claim of territorial sovereignty. Most people in most cities in the world don't imagine when buying or moving into or even seizing a house that they have contributed to changing the nation in which that house sits, but this is not most cities.

This is a city where more than a third of residents aren't citizens of the state of Israel, a state which discriminates against them when it comes to services, movement and housing, in a bid to remove them from the city by administrative attrition.

By day I walked the streets of Jerusalem with my father and by night I read arguments around the embassy proposal. I learned it was self-evident that Jerusalem was Israel's capital, even as commentators waxed lyrical about the distinctions any Australian decision would make between the city's west and east. 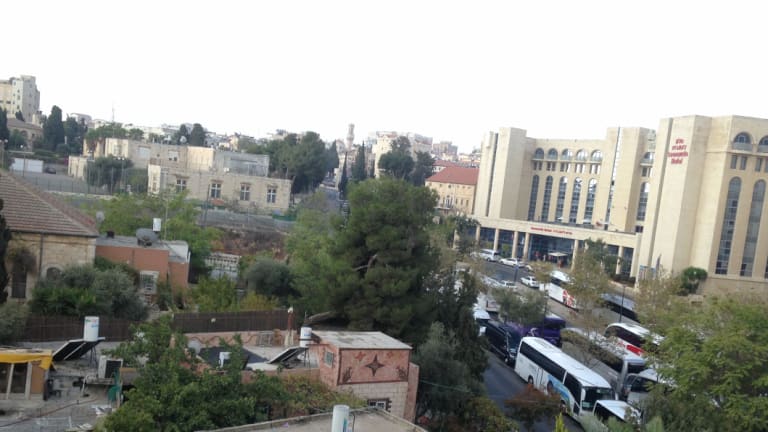 The Leonardo Hotel (right) is in what was no man’s land between East and West Jerusalem after the 1949 armistice lines were drawn. Across the street full of tour buses is the back of St George’s School, where my father was a boarder. Credit:Maher Mughrabi

But this line, suddenly so important in Australia, is not outwardly evident. Indeed, it has long been the Israeli government's position that there is no such line, that Jerusalem is indivisible.

Yet Jerusalem is still divided, in all sorts of ways. Just ask someone who lives in the part of Israel's Jerusalem municipality called Kufr Aqab, or the part called al-Nuaman. In both these cases, residents of an Arab neighbourhood are walled off from the city they are officially part of, and because of the IDs they have been given, the residents of al-Nuaman are even breaking the law by waking up in their beds every morning. 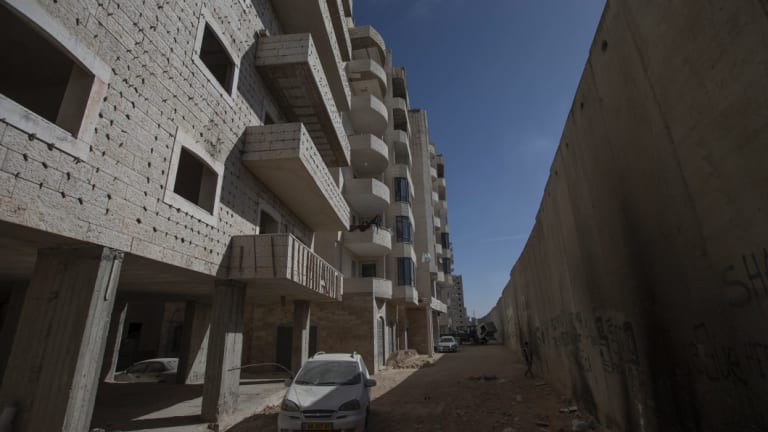 A building under construction in the Kufr Aqab neighbourhood in Jerusalem, divided from the rest of the city by Israel’s security barrier, seen on the right.Credit:New York Times

Or take the part called Silwan, where 70 Palestinian families are fighting a religious settler organisation to stay in their homes. The plight of the families from Silwan moved one Israeli judge, Daphne Barak-Erez, to write: “Evicting people who have lived on this land for decades – some of them without even knowing that the land belongs to others – creates a human problem. Especially when it’s done without compensation or any other solution … Property rights are important, but it’s also important to defend people’s homes.”

Whatever Barak-Erez or other Israeli judges may say or decide, in cases that pit citizens of the state against stateless Palestinians their jurisdiction can never produce justice. For that to be achieved, there first has to be Palestinian enfranchisement.

A question of recognition

Perhaps the strangest aspect of Morrison's proposal was his contention that it was a daring and new approach that upended "the orthodoxy that's driven this debate". "We’re committed to a two-state solution, but frankly, it hasn’t been going that well. Not a lot of progress has been made. And you don’t keep doing the same thing and expect different results," he said.

It's possible that the Prime Minister simply cribbed this argument from his friend Dave Sharma, who advanced it in May, after the United States moved its embassy. Yet the truth is that according official recognition to Israel while leaving the status of Palestinians in limbo and refusing to consult them on decisions that involve them is part of a pattern now more than a century old.

During our October trip we took a bus through a military checkpoint to Bethlehem and my father took me to see Banksy’s Walled Off Hotel. Like many Palestinians, I have my reservations (no pun intended) about this tourist attraction. But when you are greeted at the entrance by an automated effigy of British foreign secretary Arthur Balfour signing the 1917 Balfour Declaration, you have to nod your head.

Here is the white man with the pen of empire, giving official recognition to plans for a Jewish "national home" without ever mentioning the words Arab or Palestinian. As he wrote to his fellow imperialist, Lord Curzon, "in Palestine we do not propose even to go through the form of consulting the wishes of the present inhabitants of the country", since the majority of those inhabitants were Palestinian Arabs.

Thirty years later, the United Nations proposed partition of Palestine, with Jerusalem and Bethlehem as part of a separate entity belonging to neither a Jewish nor an Arab state. This plan required the consent of both parties, yet when Israel declared its statehood unilaterally, resulting in a war that it won, the Western powers recognised the new state founded by force, with a vague commitment to restore Palestinian rights at some point in the future.

At Camp David in the 1970s, Egypt recognised Israel and their peace deal, brokered by the US, pushed the realisation of Palestinian rights into an indeterminate future; at Oslo in the 1990s the same approach to sequencing left Israel with an effective veto over Palestinian statehood for 25 years. Far from breaking any pattern, Morrison's move would perpetuate one.

The difference between Israeli rights that are recognised and Palestinian ones that are deferred or denied was very much on the mind of Rabih Sabbagh, a Palestinian living in Sheikh Jarrah, just a few weeks ago when he and his extended family lost the latest round of their legal fight against eviction from their home of 62 years. The law that allows Jewish Israelis to claim the Sabbaghs' home in Jerusalem does not give him the right to claim the two homes he owns in Jaffa, on the coast of what is now Israel.

"If you treat me equally … I'll say 'yes you're a democratic country'. But if you treat me differently, what democracy are you talking about?" he asked journalists.

It is in this land of blocked roads, blocked rights, evictions and demolitions that the Jewish Israeli walking where he likes becomes both a political provocation and a territorial claim. Ariel Sharon knew this when he walked through the religious heart of Jerusalem with dozens of police in 2000, and the latest Israeli politician to walk this walk is Rabbi Yehuda Glick.

One morning, after stopping at the graves of my grandfather and great-grandfather by the Old City's walls, my father and I decided to walk through St Stephen's Gate and visit the grounds of al-Aqsa mosque. What we did not know was that Glick had recently made the latest of his walks there – part of a continuing tussle with his own prime minister and the city's Palestinian population that has seen him threatened and even shot. 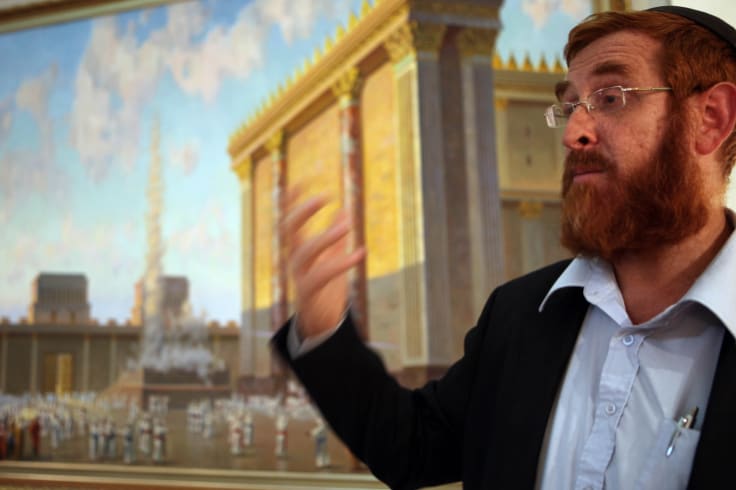 Rabbi Yehuda Glick stands next to an artist’s impression of the Jewish Temple, deemed to have stood on what is now the cite of al-Aqsa mosque.Credit:Gali Tibbon

The five heavily armed Israeli police at the entrance to the mosque compound had just waved through three Japanese tourists, but my father in his baseball cap and me in my floppy Australian sun hat were another matter.

"You cannot come through this gate unless you are Muslim," my father was told. He confirmed that this was the case, so the officer demanded to see his passport. Out came our British passports. "British?" said a female officer.

The biggest of all the officers, with a beard and fluent Arabic, decided not to take this remark up. Instead he pointed at me: "This is a Muslim?"

The officer stood in front of me. "Say the Fateha." 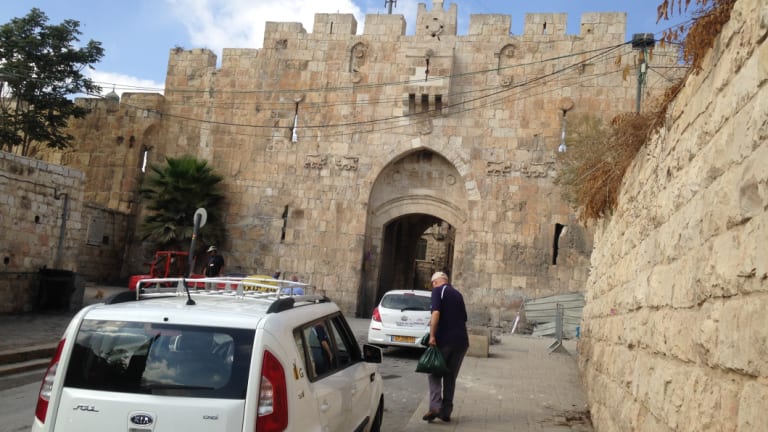 My father (right) approaching St Stephen’s Gate, also known as the Lions’ Gate, one of the entrances to Jerusalem’s Old City in the occupied east of the capital.Credit:Maher Mughrabi

I began reciting the opening verses of the Koran. I was aware of my father looking at me ("I didn't think you would remember") and the female officer saying "yeah" after the fifth line, when the big officer cut me off.

"Say the Shahada," he barked. I should really finish saying the Fateha, I thought, before reminding myself where I was. So I recited the Islamic creed, and the police grudgingly waved us through. 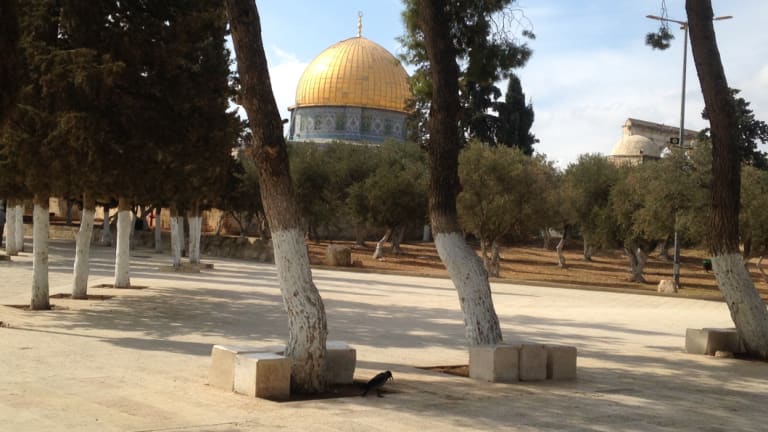 Inside the Old City: The Dome of the Rock is seen in the courtyard of al-Aqsa mosque, known to Arabs as the Noble Sanctuary and to Jews as the Temple Mount. Credit:Maher Mughrabi

After only a few minutes, we came upon a Palestinian washing the flagstones with a high-pressure hose. To my astonishment, he yelled at my father in Hebrew, pointing the hose at him. My father raised his hand to ask for a chance to speak.

"Put down your hands!" yelled the man, still using Hebrew.

"He is a Palestinian like you," I said in Arabic.

"A son of the town," my father added.

There was hesitation, disbelief, dismay. The man ran after us, pleading to be forgiven. "This bastard Glick and his visits," he said. "We are all upset." 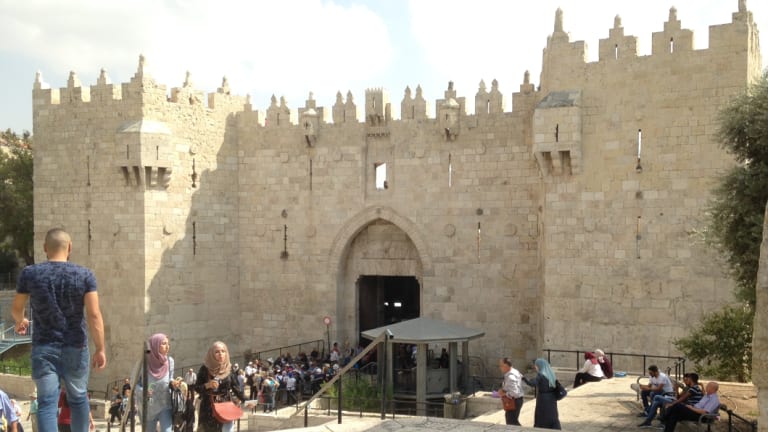 The Damascus Gate entrance to Jerusalem’s Old City. The grey metal structure right of the gate is an Israeli police post. Credit:Maher Mughrabi

"There is nothing to forgive," my father said.

After we had seen the sights, I headed towards the Cotton Merchants' Gate leading into the Old City.

"No Maher," my father said. "We go out the way we came in. Past those officers."

Australia's recognition of Israeli sovereignty in Jerusalem would cross an important threshold. But it certainly won't make it OK to be a Palestinian, there or anywhere else in Palestine. For that to happen, a very different set of steps is required, that lead to real equity, democracy and freedom.

Maher Mughrabi is Features Editor of The Age.