London: It was two of my girlfriends, both who live in Clapham in south-east London — not too far from me — who brought Sarah Everard’s disappearance to my attention.

They got in touch separately, asking if I’d heard about the girl who had gone missing.

They had both walked the same route as Everard. They knew the roads she took and the point where she vanished. 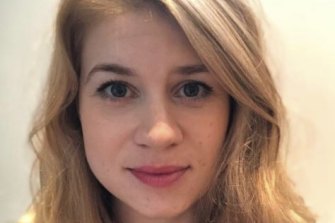 Sarah Everard was killedas she walked home from a friend’s house in south London on March 3.Credit:Met

Her body was found a week later. WhatsApp messages flew with shock and horror — the sickening feeling that a young woman, older than them, younger than me, was snatched and killed. Her short, beautiful life taken for the simple act of walking home.

“Every single woman was hoping and praying that there was an innocent explanation for her going missing,” says Nimco Ali, an adviser to the British government on tackling violence against women and close friend of Carrie Symonds, Prime Minister Boris Johnson’s fiancee.

“But when the news came out that she’d been killed, it was an emotional thing for all of us. It was a collective grieving and the fear that it could have been me and if it’s not me this week it could be me next week.”

The grief has turned to white-hot anger made worse by the police response. The man accused of kidnapping and murdering Everard, Wayne Couzens, is a serving police officer. He was reported four days earlier for flashing at a woman, but police did not investigate the report further. An independent investigation has been established. He faces trial in October. 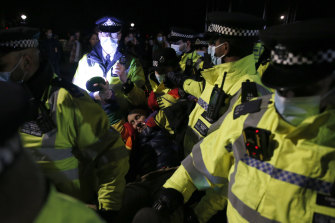 A member of public is arrested during a vigil for Sarah Everard in London on Saturday.Credit:Getty Images

But on Saturday night the outrage turned into fury from all corners of society and from all political directions, as police pinned a female mourner to the ground, claiming the vigil at Clapham Common, near where Everard went missing, broke COVID-19 restrictions.

The images were made all the worse given that last year many men and football fans in Liverpool openly packed the streets to celebrate their Premier League win without reproach.

The Black Lives Matter protests were also permitted. It looked like the police had chosen to pick on women, simply because they could. 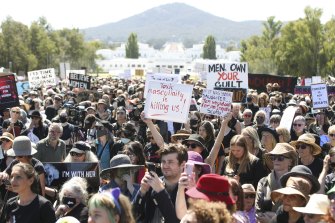 The rage is live whether in Canberra or London — women are marching out of anger, shock but above all, a demand for respect. How to achieve this is complex and impossible to exempt from politics.

Rosa Silvere, from Sisters Uncut, an organisation she describes as an “inherently left-wing, radical, black, feminist, direct action group” says the protests are an extension of the Black Lives Matter movement, where vulnerable groups say they do not feel protected by the institutions meant to protect them.

“There is an increasing recognition that the state cannot protect us, and I think part of that understanding also comes from the Black Lives Matter movement and the racial uprisings that took place last summer across the world,” she says.

“That built some literacy amongst predominately white people around the importance of the things like abolition — so when those things come together it creates a movement that is far more able to demand change from a system that routinely and systemically lets us down.”

While the chords of fury resound in both countries, Prime Minister Scott Morrison’s response — to tell the women protestors in Australia that they were lucky to be able to demonstrate without being met with bullets — has struck a far less harmonious note than Johnson’s, although he too is under pressure from campaigners and Labour women MPs to do more. 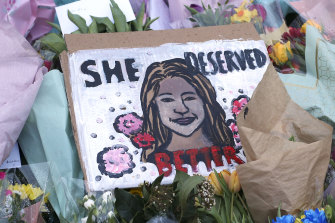 A drawing of Sarah Everard is placed with floral tributes and candles at the bandstand on Clapham Common, London, near were she was killed.Credit:AP

He notably did not rebuke those who attended the vigil at the weekend and another protest held in Westminster on Monday night, despite restrictions on gatherings.

Ali attended the government meeting and backs the funding to increase street-lighting and CCTV but said the proposal to see more undercover police in bars and nightclubs had been misreported by the British media and seized on by Johnson’s critics who claimed it was further proof of cops wanting to spy on and harass women.

Ali says there is no doubting the government’s sincerity on the issue.

“Women’s safety is going to the highest levels of government,” she said. “The government is saying, ‘we hear your concerns, let’s work together to do something and that’s why I’m here as an independent advisor’.”

Female Labour MPs have been quick to point out that Johnson’s policies would not have saved Everard who wasn’t on a night out when she was abducted — she also walked well-lit roads and called her boyfriend on the way.

Extra CCTV and lighting are of course practical and commonsense and welcome — although it’s worth pointing out that Everard’s accuser was identified by footage captured by an already existing bus-cam.

Again, this surveillance, in a city with an already-high concentration of CCTV didn’t stop the 33-year-old ending up dead, allegedly at the hands of a serving police officer, for simply attempting to walk home.

What is universal is the acknowledgement that the solution to violence against women is not obvious nor simple.

Silvere says the focus on policing is imbalanced, particularly because violence against women is under-reported and under-investigated when it is reported, and more resources should be poured into community services like shelters and refuges for women.

Labour MP Stella Creasy is campaigning for misogyny to be made a hate crime, so that more women will report abuse and assault.

Ali is among those campaigning for sexual harassment on the streets to be made a crime so that men who harass and leer at women on the street understand that their behaviour is as “disgusting, embarrassing and not okay” as defecating in public.

She tells of her sister being followed home by a man who intimidated and frightened her sibling, but technically did not commit an offence because he didn’t touch her.

“That should not be okay,” Ali says.

But she says finding ways to have constructive conversations with men isn’t about excluding them.

“These same things are leading to the corrosion of male wellbeing and male suicide, in order to save ourselves as women, we will be saving men at the same time.”

Achieving this degree of change would be a lasting tribute to Sarah’s life. Meanwhile, we’ll all be gripping our keys a little tighter on our way home at night.