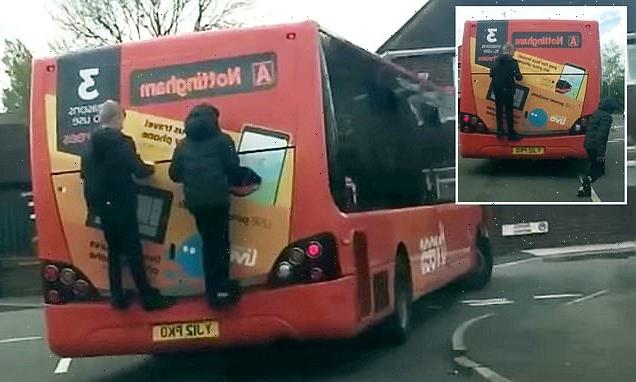 This is the moment two reckless schoolboys diced with death as they clung to the back of a bus travelling at 30mph in busy school-run traffic.

The pair were filmed balancing on the bumper of a number 3 bus as it went through Kirkby-in-Ashfield, Nottinghamshire, last Thursday.

Carer Liz Todd, 32, said she couldn’t believe her eyes when she spotted the pair hitching a ride on the Nottingham-bound bus as she drove home at around 3.30pm. 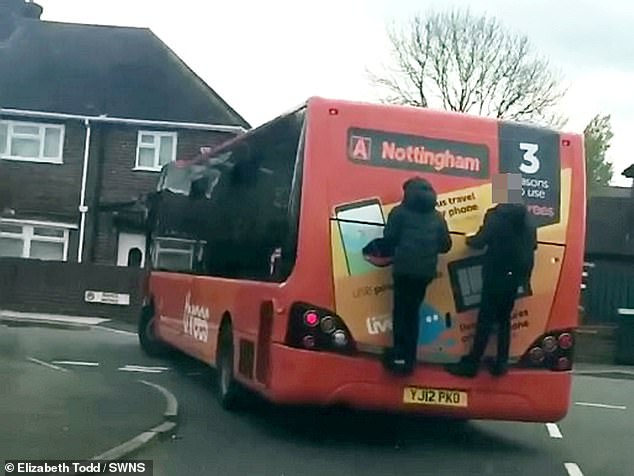 Two schoolboys were captured on camera hanging on to the Trentbarton service as it went through Kirkby-in-Ashfield, Nottinghamshire, last Thursday

She said: ‘They could’ve fallen off at any time. I was worried they would fall off and get run over by myself or another car.’

Her footage shows the youngsters precariously holding on for more than a minute, before jumping off the bus and running away.

The mother-of-two said: ‘I just couldn’t believe my eyes that these two young lads were on the back of a bus doing something so stupid.

‘I didn’t see them get on but I noticed them on the back after the bus stopped to pick up some people, so I think they got on then and hung on for about a minute.

‘I was so shocked. I had to record it because I couldn’t believe what they were doing. 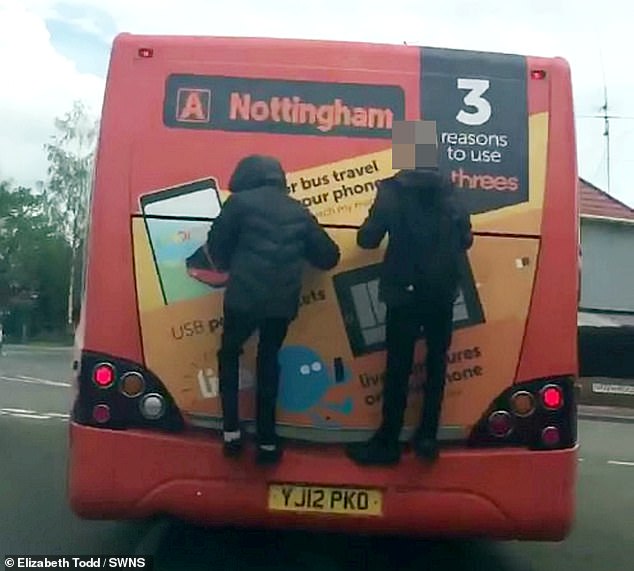 Liz Todd, 32, had been travelling home along Berry Avenue around 3.30pm when she saw the pair riding on the rear bumper in the middle of busy school-run traffic

‘First one boy jumped off and then the other followed. In the video you can hear me swearing because I was so shocked.

‘I was shouting, “Are you mad, are you mad?” but they ignored me.

‘I showed it to my daughter and her friend and they recognised the boys from year nine at a local school.

‘I don’t know if someone has reported it to the school, but I think they should know about it.

‘I put the video on Facebook and it’s got more than 13,000 views. I wasn’t expecting it to go viral.

‘Some people on Facebook are saying it’s so funny but it’s only funny until someone gets seriously hurt. 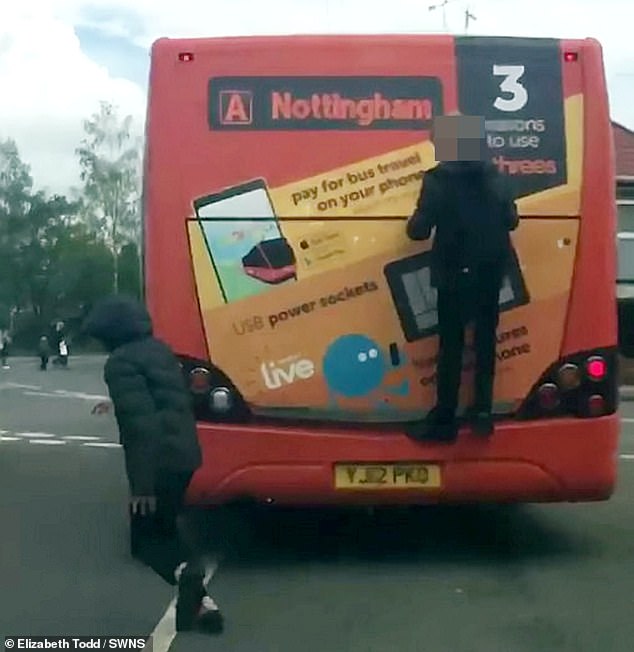 She filmed the moment the youngsters precariously held on to the back of the vehicle for more than a minute, before jumping off and running away

‘If it helps people not to do things like that in future, I’ve done a good thing by sharing the video.’

A spokesman for bus operator Trentbarton said: ‘We were shocked to see this footage.

‘Not only are these boys endangering their own lives, they are also risking the safety of other road users.

‘Our driver would have been completely unaware of their reckless actions.

‘Our message to these boys in particular, and any other young people thinking of trying something similar, is simple – do not risk a broken bone or worse.

‘If our CCTV cameras record such dangerous behaviour, we will report it to the police.’ 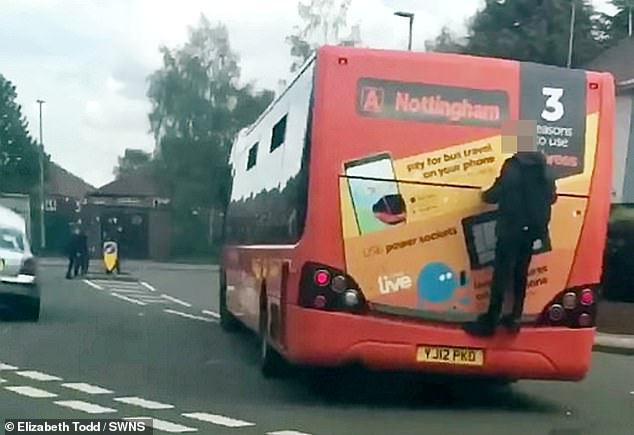 The other boy followed not long after the first jumped off after hanging on to the bus. Liz, a carer, said that she didn’t see them get on but noticed them after a bus stopped to pick up passengers