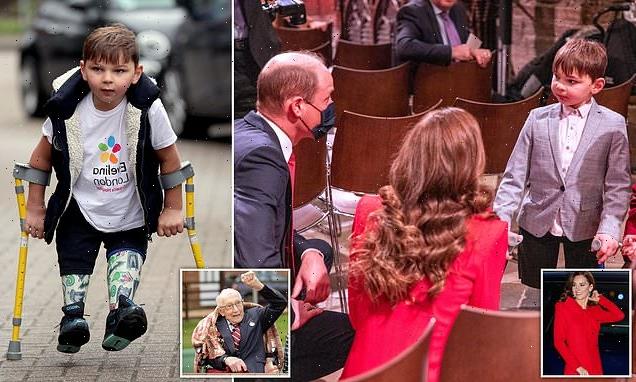 It was a touching moment that charmed the nation. As the Duke and Duchess of Cambridge walked into Westminster Abbey on Wednesday evening, their attention was drawn to a seven-year-old boy waiting shyly in the aisle.

Rosy-cheeked, and dressed neatly in a shirt and blazer, little Tony Hudgell beamed as the Royal couple crouched down for several minutes to chat to him about his favourite Christmas carols.

That it was a special moment for Tony, and a very proud one for his adoptive parents Mark and Paula, who looked on tearfully, was clear to anyone.

Paula describes it as ‘magical’.

For few boys have had to fight to survive as much as Tony has in his short life. Visible below his smart shorts were Tony’s prosthetic limbs, which he wears after having both legs amputated when he was only three. 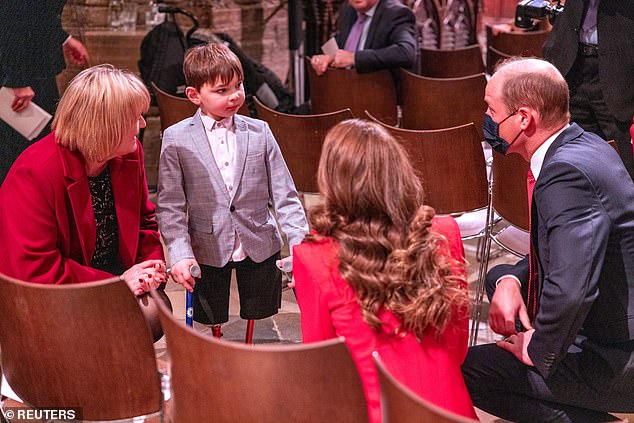 His story is shocking. He was six weeks old when, neglected by his birth parents and suffering from a catalogue of appalling, life-threatening injuries including multiple organ failure, fractures and sepsis, he was rushed to intensive care.

In the following weeks, he survived 23 operations and eight blood transfusions.

Tony – known to Mark and Paula as ‘Bear’ – was invited to Kate’s Together At Christmas carol service after demonstrating courage beyond his years, having raised more than £1.6 million by walking 10km on his new legs in aid of the Evelina London Children’s Hospital which cared for him.

He had barely used them before, but inspired by the late Captain Sir Tom Moore, who at 99 raised £33 million for NHS charities by walking laps of his garden, Tony dragged himself around on crutches until he was strong enough to walk unaided.

‘His little face lit up when he saw William and Kate. She walked towards him and crouched straight down to his eye level. And William came up behind and chatted for what seemed like ages. 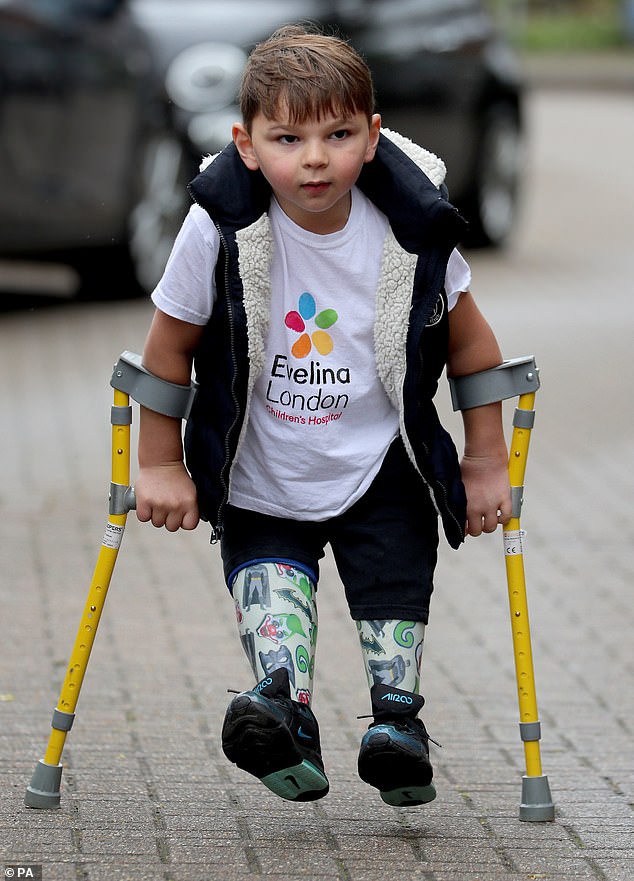 Tony raised more than £1.6 million by walking 10km on his new prosthetic legs in aid of the Evelina London Children’s Hospital which cared for him

‘Kate asked him about his walk and whether he was still going to the hospital and then she asked what his favourite Christmas carol was.

‘He went a bit shy because his favourite Christmas song is Santa Baby but then William said ‘I like that one too’, and he was thrilled.

‘It was so magical.’

Mark, 57, recalls the conversation went on for ‘probably five minutes’, and that the couple spent longer with Tony than with anyone else.

He and Paula sat in stunned silence for the rest of the service, led by the Dean of Westminster, the Very Reverend Dr David Hoyle.

The concert, which began with the hymn Once In Royal David’s City, featured carols sung by the Westminster Abbey choir as well as performances by Leona Lewis and Ellie Goulding, and readings by Prince William and Kate Garraway.

There were reindeer outside and a choir singing as the guests arrived.

‘It was all very festive,’ Paula says. ‘Everything Kate wanted for Together At Christmas.’

In the order of service – which was signed ‘Catherine’ – the Duchess wrote of ‘how powerful human connection is to us all’.

‘Over the past two years, we have been truly inspired by countless people who have brought their communities together through simple acts of love and kindness,’ she wrote.

‘This Carol Service is our small way of recognising the inspiring contribution so many of you have made.’

Few stories are more inspiring than Tony’s – which, in no small part, is down to the love and support he has received from Paula and Mark.

The couple, from West Malling in Kent, have five children between them from previous relationships and three of their own. After they began fostering in 2014, Tony was the second child to be placed with them.

Paula, a former market research supervisor who is Tony’s full-time carer, will never forget setting eyes on him for the first time.

He was four months old, and still fighting for his life in hospital after being horrifically abused by his parents, Jody Simpson and Tony Smith.

The pair had swung their tiny baby, then just weeks old, around by his ankles, fracturing his legs in eight places. Following a campaign by Paula and Mark to see them brought to justice, they are serving a ten-year prison sentence for child cruelty.

‘Originally, I wasn’t given the details,’ recalls Paula. ‘I was just told the bare minimum – that he had been poorly in hospital and had his limbs broken.

‘I was asked to spend 48 hours with him until I could take him home. He was asleep in a cot and he looked very peaceful but really tiny for a four-month-old baby.

‘His legs were in plaster and his little arms were so skinny. They had literally only come out of plaster the day before.’

‘The first few pictures, I just broke down and sobbed,’ she says. 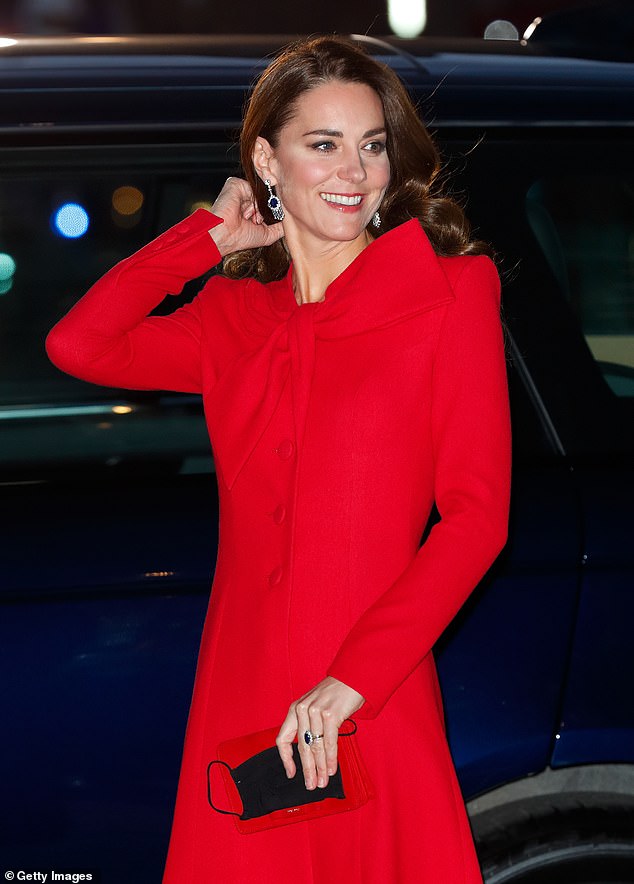 ‘It was the most horrific, awful set of circumstances. His birth mother had waited ten days before taking him to the doctor. He was grey, unresponsive, and frothing at the mouth.’

Luckily, a nurse at the GP surgery called an ambulance immediately and administered critical antibiotics.

‘That is what saved him really, gave him that chance,’ Paula adds. ‘They didn’t expect him to survive. The nurse explained he would need lots of care and lots of trips to hospital. I was overwhelmed looking at this tiny, fragile and broken baby.’

Initially, Paula questioned whether they could offer Tony the support he needed. But after giving him his first cuddle and staring into his brown eyes, she knew he would come home with her.

‘He had the biggest brown eyes you’ve ever seen. Because he was so tiny they looked massive. I sent a picture of him to Mark and the kids and said, ‘I can’t leave him here. I have to bring him home.’ ‘

They had a long struggle ahead. Tony was ‘very, very poorly’ and taking antibiotics and pain relief.

‘He was very shut down. Even when he opened his eyes, he was like a shell. There was nothing there. There was no expression. All I saw was this deep fear and sadness. He was in so much pain.’

‘Psychologically it was doing him more damage seeing them three times a week, but it was against their human rights not to permit it.

‘They actually harmed him twice. After one visit, a few weeks after he came out of hospital, the social worker who brought him back told me, ‘He’s been really unsettled. He hasn’t stopped crying.’

‘I lifted the blanket off the car seat and discovered he wasn’t strapped in – if they had knocked him, he would have fallen out – and the plaster cast on his leg had been pulled down over his foot.

‘I had to take him back to the hospital, have the cast removed and a new one put on.

‘On another occasion, after the plaster cast had been removed, the splint strapped around his leg to keep it straight had been snapped at the back of his knee, which is really hard to do.

‘There was nothing I could do. All I could do was inform the social workers and make notes in my diary. But the visits continued.’

Mark and Paula finally adopted Tony in March 2016. As his official legal guardians, they finally had access to the full, horrifying story behind his injuries.

But frustratingly, police had dropped the case against his parents. In the meantime, doctors realised they could not save Tony’s legs and they were amputated in 2017.

‘I knew we had to do something,’ Paula says. ‘If they had sought medical help when he first had those fractures, he would have healed and be able to walk.’ 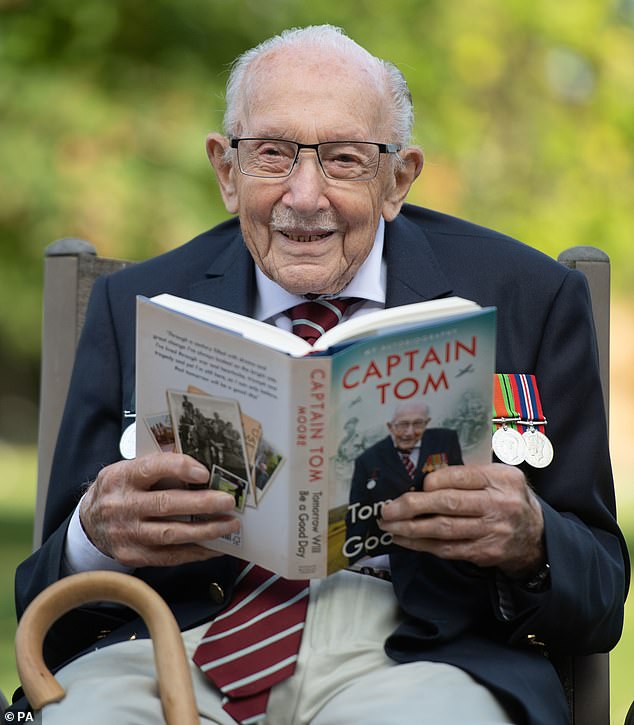 Tony had barely used his prosthetic legs, but inspired by the late Captain Sir Tom Moore (pictured), he dragged himself around his garden on crutches

Smith and Simpson were finally charged with child cruelty and jailed in February 2018 after Mark and Paula lobbied the police, their police and crime commissioner and their MP, Tom Tugendhat.

Then, against significant adversity, Tony decided to defy expectations and do a sponsored walk in June last year.

At that stage, he had barely used his prosthetic legs, so they settled on walking a third of a kilometre every day to reach the 10km target by the end of the month.

Paula says: ‘The very first few days, it took an hour. It was so hard for him. By the end of the 30 days, he was speeding along so fast. We saw such a massive improvement in his walking – and it’s continued to this day.

‘We thought we’d raise £500 – then our community got behind us and it went national and global.’

‘As the time went on, more and more people joined the walk with him,’ says Mark. ‘It was brilliant. People put up banners and travelled for miles to join him. Cars were tooting him. It really united our community.’

The fundraiser came to the attention of the Duchess of Cambridge, who is a patron of Evelina London.

A letter from Kate, dated August 7, 2020, is now framed on Tony’s bedroom wall. The Duchess wrote: ‘I wanted to send you my congratulations following your amazing fundraising efforts last month for Evelina Children’s Hospital.

‘It was wonderful to hear how you were inspired by Captain Sir Tom Moore’s story to carry out your own walk. I am very impressed that you carried on even after reaching your target of 10km!

‘I know that your efforts have been hugely appreciated by Evelina, and we are all so proud of what you have achieved. I hope that you manage to have a very well-deserved rest before starting on your next adventure – whatever that may be! Catherine.’

‘It just turned up in the post,’ explains Paula.

‘He was obviously excited because it was something Royal, but he was only five at the time so it was very young to understand.

‘He knew she was Princess Kate and I told him, ‘She is the future Queen of England. You don’t know how lucky you are.’ I couldn’t get any prouder.’

The couple have since set up the Tony Hudgell Foundation to raise money for the charities which have helped their son.

Further lobbying by the pair, which called for tougher sentences for child abusers, has also been successful.

Tony’s Law – an amendment to the Police, Crime, Sentencing and Courts Bill – was introduced last month, raising the maximum penalty for causing or allowing serious harm to a child from ten to 14 years, while causing the death of a child rises from 14 years to life.

‘We’re his mum and dad and he adores us, as we do him,’ explains Paula.

‘You always think, ‘Could you love a child that’s not your own the same as your own children?’ I can honestly say, ‘Yes. You can.’ ‘

To donate, go to tonyhudgell foundation.org.