THIS is the moment a reckless yob hurls a firework at passing cars like a missile.

The brainless troublemaker can be seen lighting and launching a rocket towards a roundabout in Saltley Gate, Birmingham. 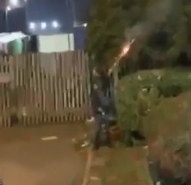 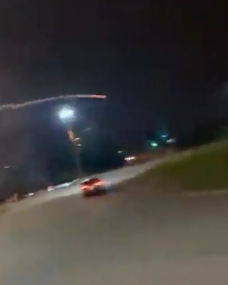 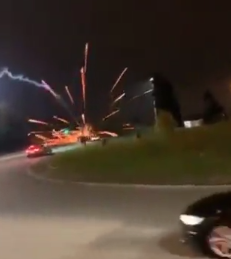 The shocking clip shows a large group watching on as the firework soars through the air.

Cars travel though the roundabout underneath and the rocket explodes just above one car's bonnet, showering the vehicle in firey orange sparks.

The car appears to make it through the explosion, driving out the other side.

One woman can be heard saying "Oh my God" as the firework hurls towards the vehicle while others laugh as it explodes upon impact.

Social media users have expressed their horror at the footage, which was uploaded to blog Birmz is Grime over the weekend.

One person wrote: "What a stupid, moronic and utterly dangerous thing to do. Could have killed someone."

Another said: "Why would you do this? Absolute idiots. Could have caused a pile-up. Do not know what possesses some people."

One person commented: "Some people literally have nothing better to do. What planet must you live on for this to be classed as an evenings entertainment."

While another added: "This could have ended in disaster. When will they learn fireworks are not toys. It could have gone up in his face in the first place." 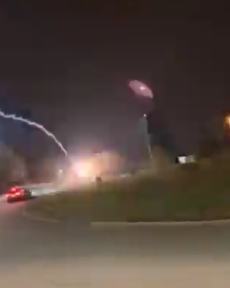