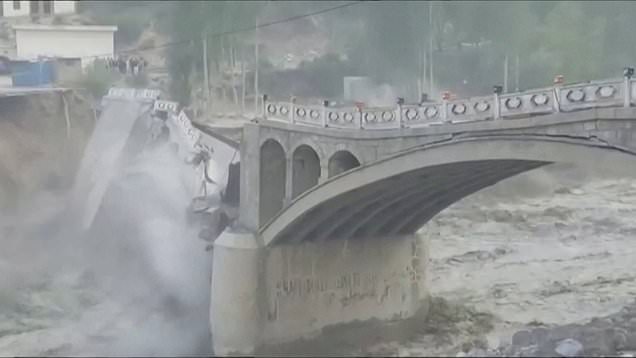 This is the terrifying moment a historic bridge in Pakistan collapsed after a huge flood, leaving hundreds of people stranded.

No casualties have been reported so far after the structure in the village of Hassanabad, in Gilgit’s Hunza Valley, gave way to a powerful burst of water on Saturday.

A recent heatwave in the glaciated region of northern Pakistan is thought to have caused large amounts of water to be released into the stream and surrounding areas.

Around 22 families have been forced to abandon their homes as a result, Hunza’s deputy commissioner Usman Ali said, adding a temporary bridge will be built after the water completely drains out of the lake.

Local reports said rapidly melting glaciers have created more than 3,000 glacial lakes in the northern areas and 33 could burst soon, sending torrents of water coursing through the stream.

Scottish meteorologist Scott Duncan warned more devastating floods could be on the way.

‘Extreme and prolonged heat in Pakistan has helped trigger a glacial lake outburst flood with catastrophic consequences,’ he said.

‘Sadly, there could be more to come. Temperatures will inevitably surpass the 50°C mark in the coming days as the heat intensifies in southern Asia.

‘It has been extremely hot in this part of the world since March. More extreme heat is building as we head through May.

‘As our planet warms, heatwaves will become more intense. Dangerous levels of heat can also occur at a greater portion of the year.’

Anne van Leeuwen, Netherlands ambassador in Bangladesh, stressed this is a ‘dramatic example of the clear and present danger of climate change’.

He said such floods are also a very serious issue for Bangladesh, located downstream from the big glaciers and waterways up north in the Himalayas.