‘She had time to arrange TV shows for the girls, but not their urgent health care’: Russian modelling school accused of pressuring severely anorexic twin sisters, 14, to lose weight blames their MOTHER

The Russian modelling school accused of pushing two teenage girls into losing weight to the point where they developed life-threatening anorexia claim the girls’ mother is to blame for their illness.

Masha and Dasha Ledeneva were described ‘living corpses’ after being rushed for emergency treatment in a Moscow hospital weighing just 6st 4lbs and 5st 9lbs respectively.

Their mother Natalia Ledeneva blamed the girls’ modelling school in the city of Voronezh for their plight, claiming they had been told to slim down until their cheekbones were visible if they wanted to be true catwalk stars. 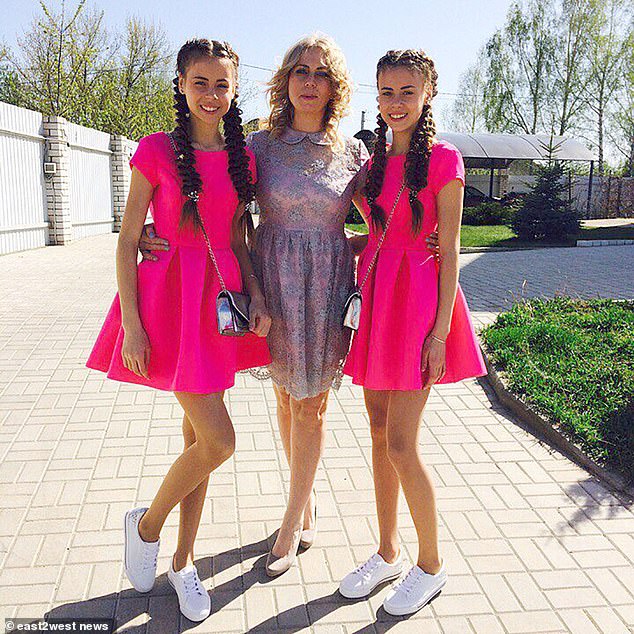 Anger: Their mother Natalia Ledeneva, pictured with the teenagers before they fell ill, say the modelling school they attended pressured them into losing weight

Now the owner of their modelling school Elena Tesmenitskaya has angrily hit back accusing their mother of ignoring warnings to seek urgent medical assistance – and instead putting them in for a top fashion show at Moscow Fashion Week.

Tesmenitskaya insisted: ‘Nobody asked them to lose weight. They were in perfect shape.

‘Some time later Masha and Dasha each lost 2kg (4lbs).

‘According to their mother, they began to eat healthy food – all steam cooked and the like.’ 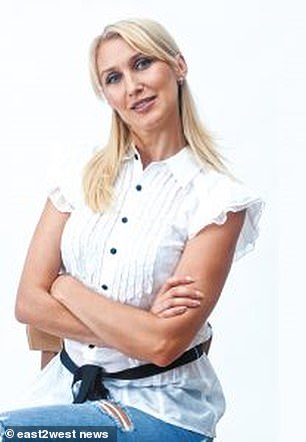 Hitting back: Elena Tesmenitskaya says the girls’ mother refused to get them help

She did not see the girls between April and September, because the school was on holiday, she said.

‘The next time I saw the girls was in September when their mother brought them to school, she said.

‘At that moment the girls were already in critical condition. I was just shocked.

‘I warned the mother many times that she urgently needed to consult doctors. But she did not want to listen to me.

‘I tried to persuade her that the girls must be saved but she refused.

‘She assured me that the girls were doing well and had already began to eat well.’

‘All friends and relatives tried to help them, and Natalia just did not want to believe that her girls were ill.

‘I don’t want to blame her, but everybody knows that she is guilty. She had time to arrange TV shows for the girls, but not to sort out their urgent health care.

‘This is the most horrible thing.’ 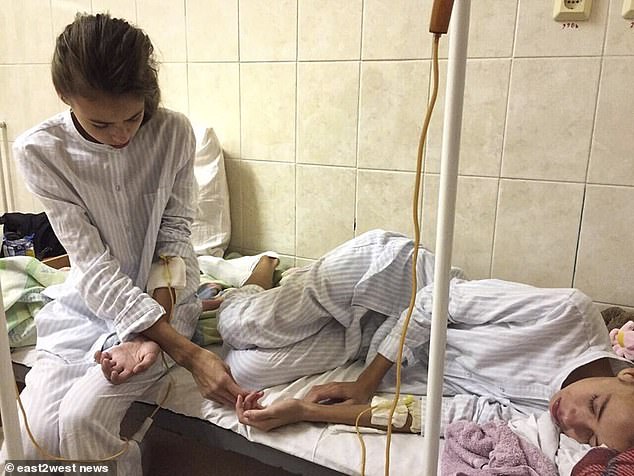 Emergency care:  two girls have been recovering after falling into comas for three days in the hospital they were being treated in 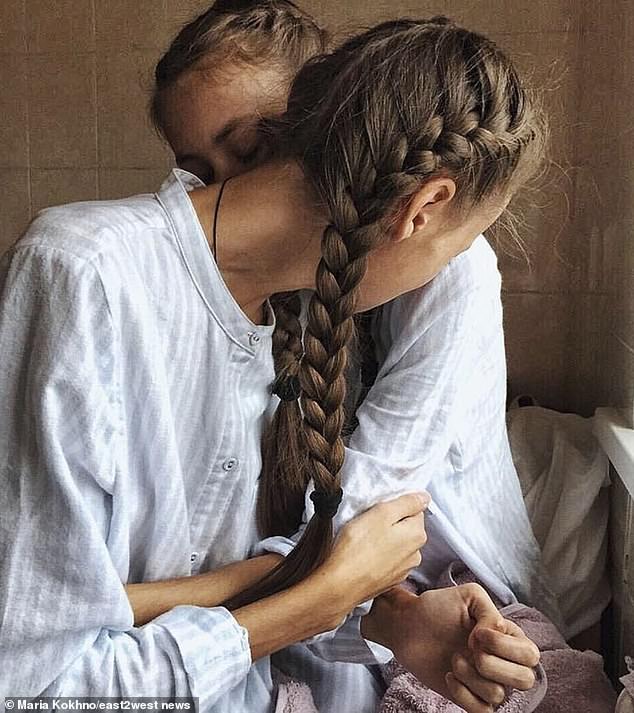 Improving: The girls were given emergency treatment at a specialist hospital in Moscow 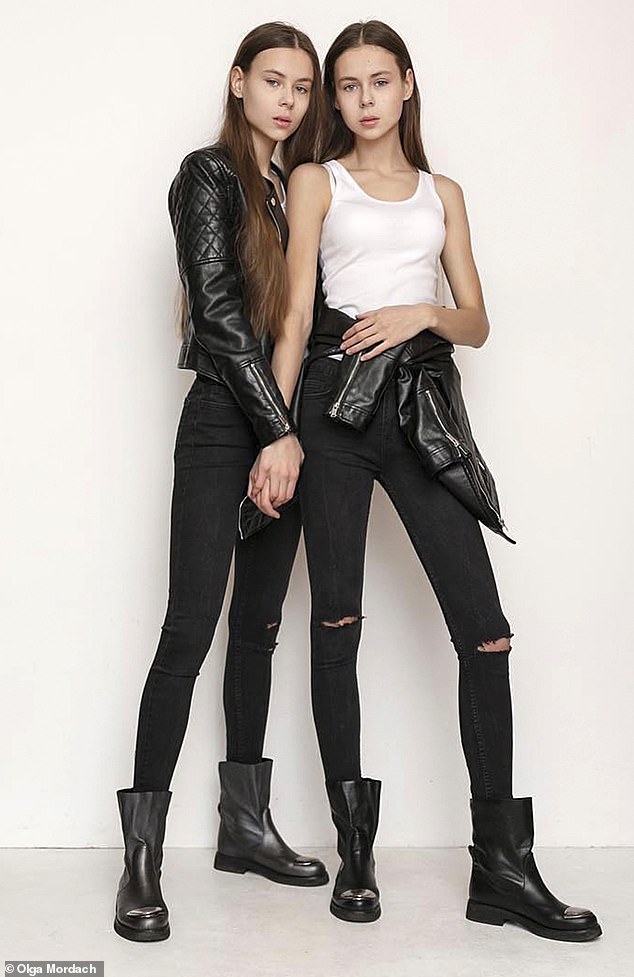 Pressured? Modelling school director Tesmenitskaya said their mother ‘had time to arrange TV shows for the girls, but not their urgent health care’ 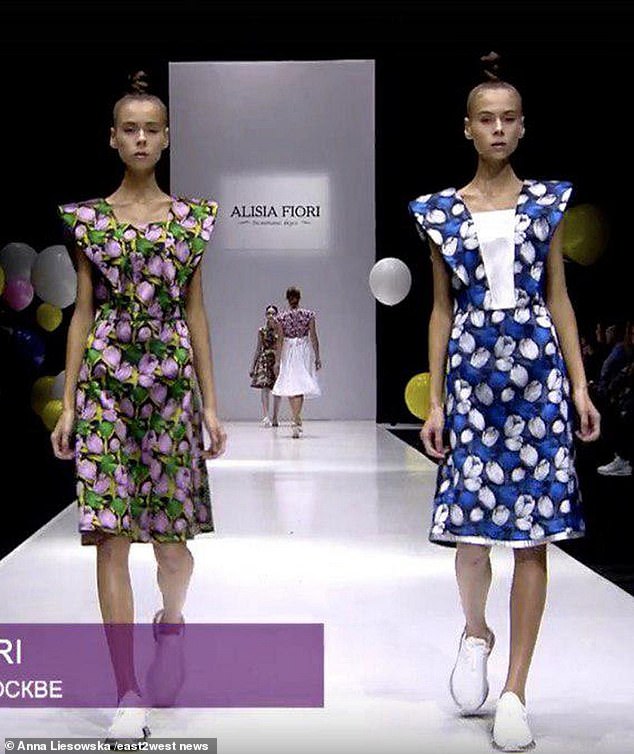 Success: The two teenage twins are seen walking in their final fashion show before they were hospitalised in Moscow 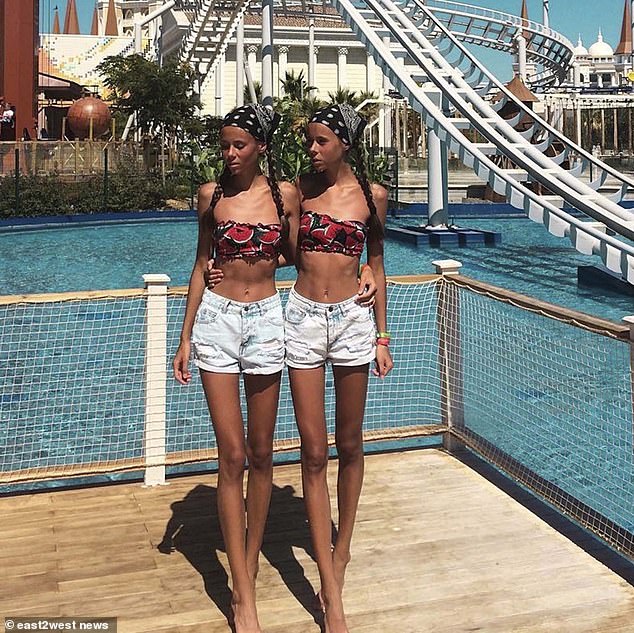 Slimming down: The twins’ mother said they had been told to slim down until their cheekbones were visible if they wanted to be true catwalk stars

Tesmenitskaya – who has trained a number of successful models including her own daughter – denied forcing the twins to take part in Moscow Fashion Show when they were visible wilting.

‘It was the mother who took them to fashion show in Moscow,’ she insisted in an interview with Komsomolskaya Pravda newspaper.

‘They needed to go to the clinic, not to catwalk. Everybody told them about it. But Natalia feared that they would feel worse if they don’t go (to the show).

‘That her daughters would completely stop eating. I think she just did not know what she was doing. It is such a pity that we failed to persuade her.’

It offers five to 15-year-olds training for the catwalk, dancing, choreography, and participation in photo sessions and Russian and international beauty contests.

A school friend of the twins – described as grade A students – confirmed that they had been seeking to lose weight believing it would help their modelling careers.

‘Like with everything else they do, they took to losing weight with all their hearts,’ said the friend in their home city Lipetsk.

‘They told us about cooking steamed fish and meat, and snacking on fitness bars.’ 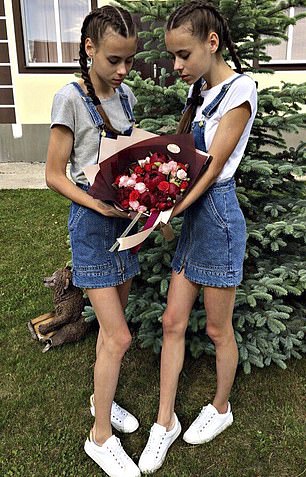 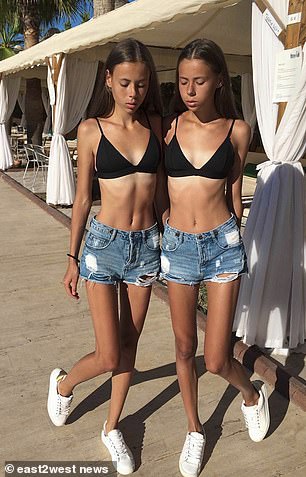 Allegations: A school friend of the twins said they had been trying to lose weight because they thought it would help their modelling careers 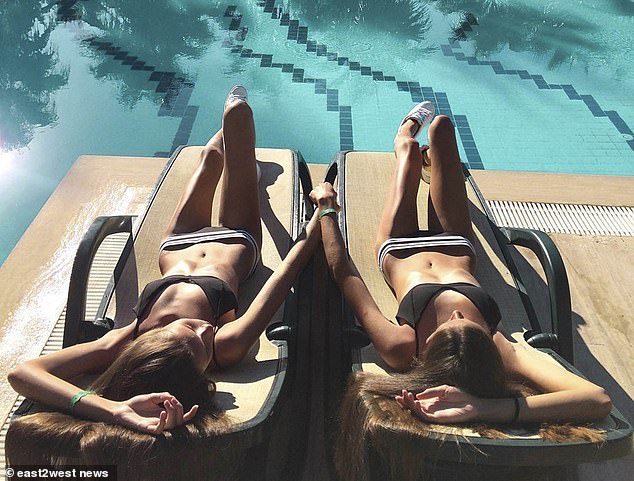 At risk: Doctors said when they entered the Moscow clinic their ‘hearts could stop beating any moment’ 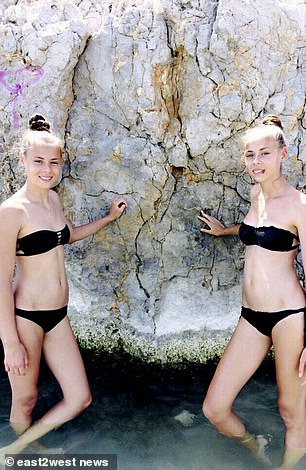 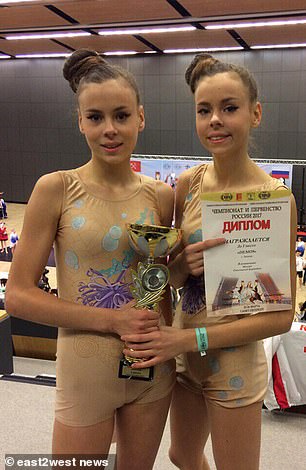 Bad training: The pair, pictured before the illness, are enrolled at a modelling school in the town of Lipsetsk where they live 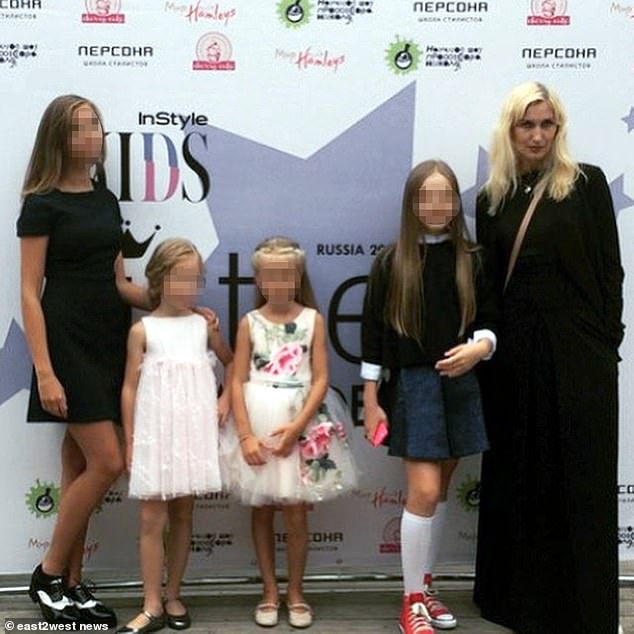 They had been aiming to get down to 7 st 12lbs, as demanded by the modelling school and agency, she said.

‘But Masha and Dasha found it hard to stop.

‘They liked it to see protruding bones. They liked sharing with friends the way their bones were sticking out.

‘Everyone around them was asking them to stop. I told them ‘This is enough, stop!’ so many times. But they insisted on going on.

‘I wonder if they thought that we were jealous of them and this was the reason why we asked them to stop.’ 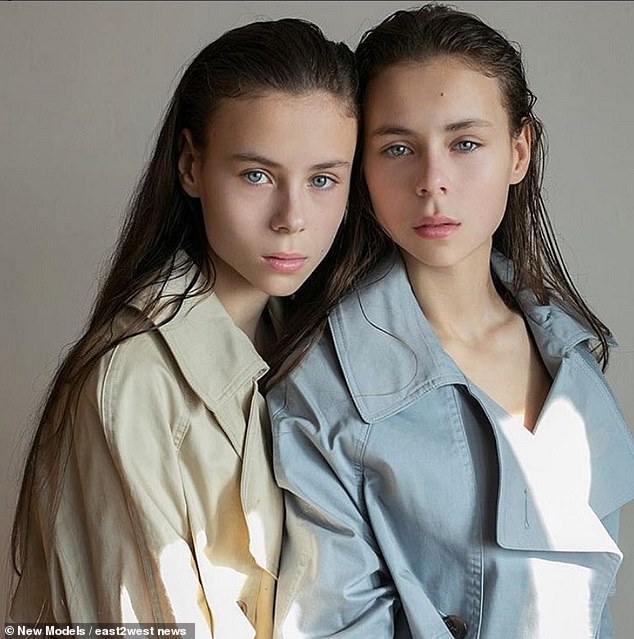 Dropping weight: A school friend said the twins had been aiming to get down to 7st 12lbs, as demanded by the modelling school and agency 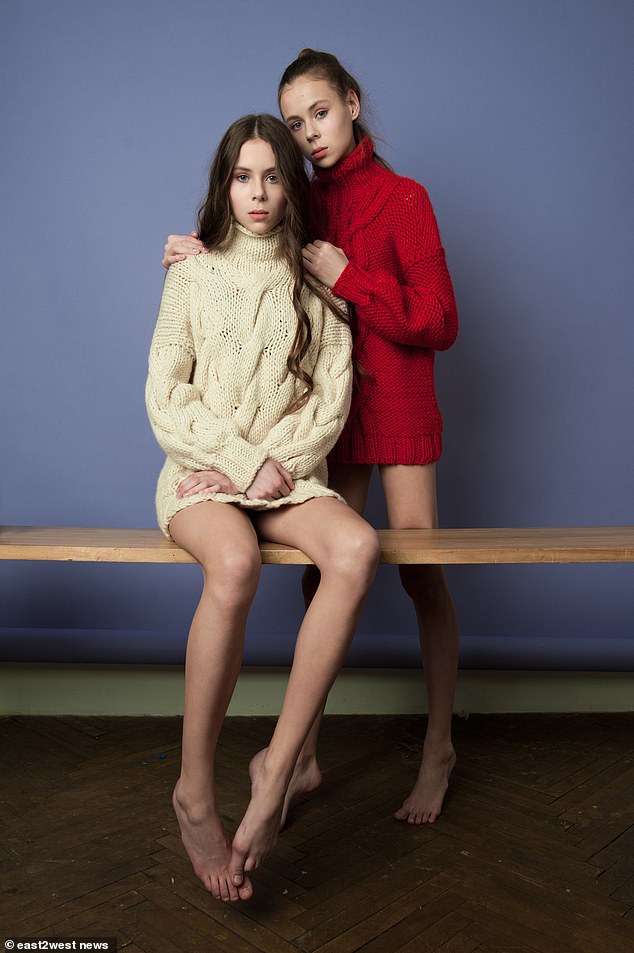 Lipetsk doctors have disputed that they refused to help the ailing girls, saying their mother discharged them

The fired said their mother runs a beauty shop and had ‘a good stable income.

‘The twins were never short of anything. Once I saw them at breakfast and they had one apple each.’

Their mother ‘begged them’ to eat porridge and start the day with more food but they said: ‘We are not hungry.’

‘Last time I saw them in August, their skin was glowing like it was transparent, their arms and legs were stick-thin, but they seemed to be feeling well.

‘Two months later I invited them to my birthday party. They said they were too busy with catwalks.’

She claimed that Dasha had collapsed at a fashion show in November and had to be rushed to hospital.

Her sister also felt bad and was taken to a hospital in Lipetsk. Reports say Dasha was ‘unconscious for three days’.

Lipetsk doctors have disputed that they refused to help the ailing girls, saying their mother discharged them.

Kokhono said: ‘Nobody was keen to help the girls, their mother went here and there, hospitals were rejecting them.

‘Masha can stand up but Dasha is only lying and cannot even lift her head.’ 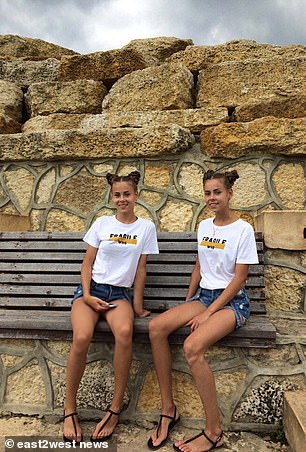 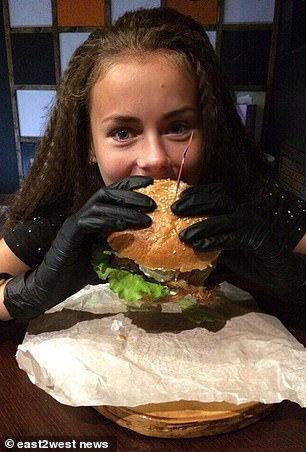 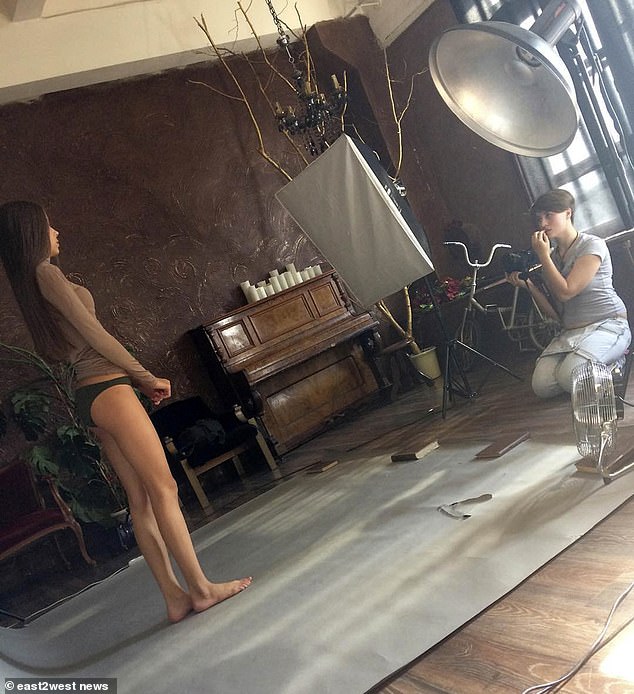 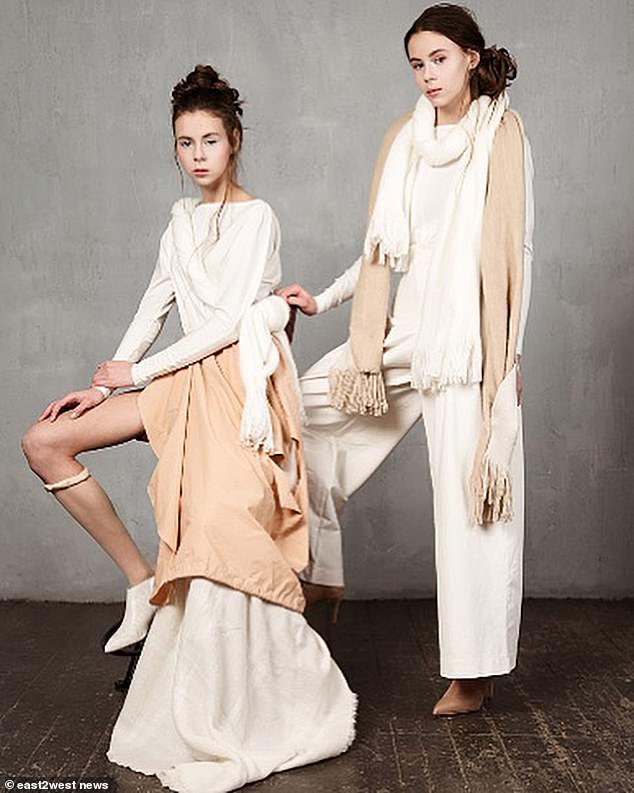 Posing: The two teenagers in one of their many fashion shoots taken at the school

Natalia was earlier quoted saying: ‘They were told Dasha’s body shape is quite okay but Masha should get rid of couple of kilos…

‘The girls heard it in their own way.

‘These children have always been perfect in everything, so they decided to be perfect here too.

‘It all happened very quickly. At first, they began to reject (food)…

‘They would have one cutlet and two spoonfuls of buckwheat for dinner.

‘I was running after both of them, trying to persuade (them to eat)…

‘I thought they would hear what I was saying.

‘But it is that kind of disease when they do not hear you, the disease was progressing.’

Fighting back tears she said: ‘Whatever I did, however I tried to persuade them, it led to nothing…’

The twins’ elder sister Tatiana – in her 20s – said: ‘They were told to lose a couple of kilograms.

‘But this is what you can say to any other person – not to a teenager.

‘They started losing weight and then we just could not stop them.’