Missing pet dog turns up more than a DECADE later: Crumpet the Jack Russell is found just few miles her family home after she vanished from their garden 11 years ago

A Jack Russell puppy who vanished from a family’s garden more than a decade ago has been reunited with her owners after ‘miraculously’ reappearing on a nearby golf course.

Sarah Covell, 57, was devastated when her family’s three-month-old puppy, named Crumpet, disappeared from the garden of their home in Sherborne, Dorset, whilst playing with their 13-year-old dog Totty in October 2010.

The stay-at-home mother left the playful dogs together in the secure garden while tending to horses in an adjoining yard, but when she returned Crumpet was nowhere to be seen.

Despite a wide-scale search and a £300 reward for Crumpet’s return, the family – including husband Mike, 66, and their devastated daughters Tallulah, then aged eight, and Elektra, then seven – gave up all hope of ever seeing her again. 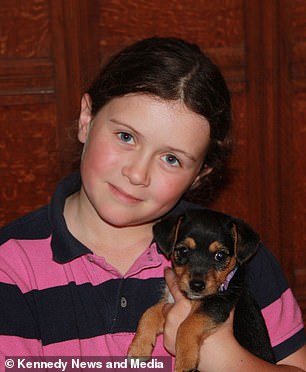 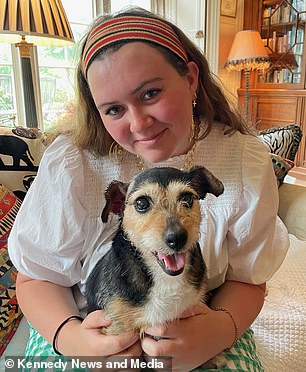 But earlier this month on June 12, after almost 11 years, Mrs Covell was left stunned when an emergency vet rang to say Crumpet had been found on a golf course – just a few miles from her home almost 11 years after she disappeared.

The poorly pooch was found with severely infected ears, meaning she is completely deaf.

Mrs Covell said: ‘My reaction to getting the call [to say she had been found] was slight disbelief to be honest.

‘It is a bit miraculous that she’s come back in to our lives and every morning we’re like wow, she’s still here. So it is a bit weird, but it’s lovely. 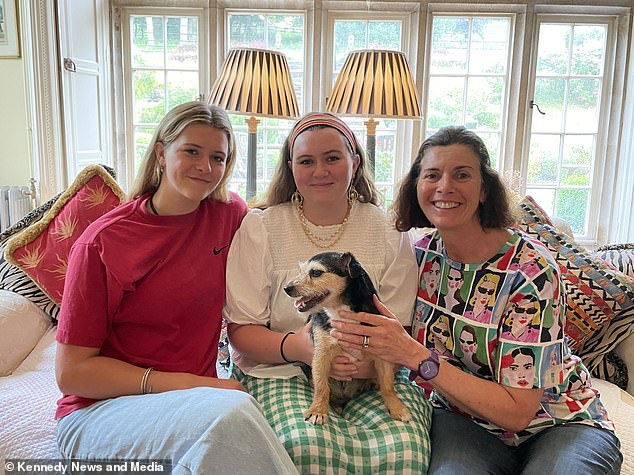 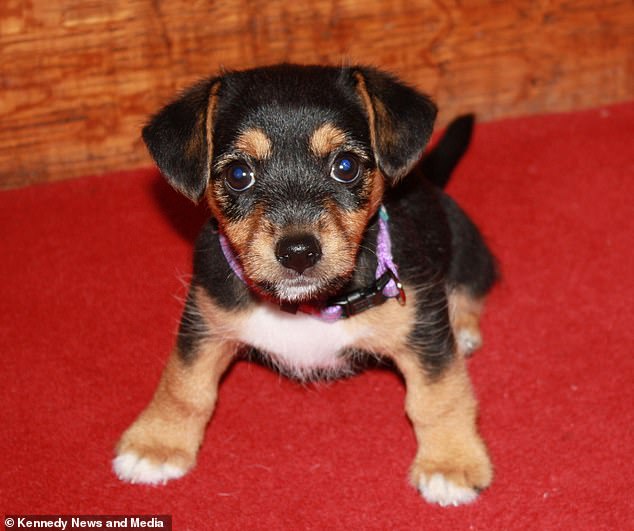 Despite a wide-scale search and a £300 reward for Crumpet’s return, the family  gave up all hope of ever seeing her again. Pictured: Three-month-old Crumpet 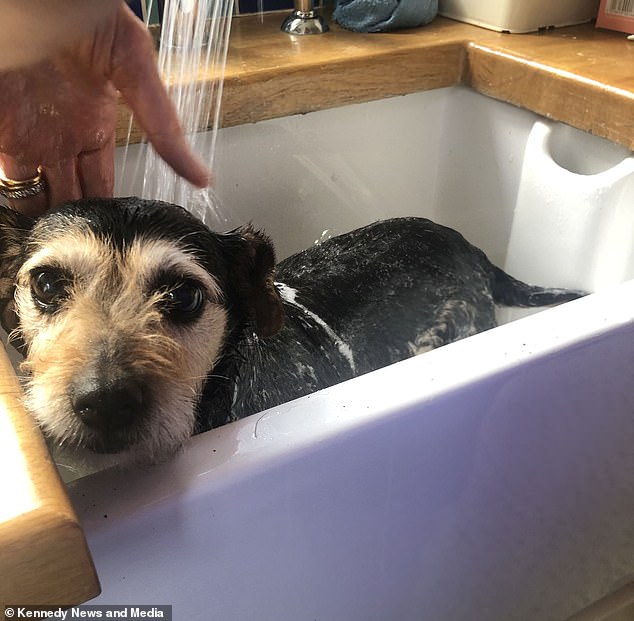 Crumpet, now 11, enjoying a bath after returning home to be reunited with her true owners

‘Obviously as soon as we saw her when she came out to us, there she was wiggling around and wagging her tail.

‘We were like ‘Ooh yeah! That’s definitely her!’ but obviously she looks very different from when she was a puppy.’

The owner, who looked for the pup for a year before losing hope, said she believes Crumpet had been bred for puppies before being dumped when she could no longer reproduce.

Mrs covell added: ‘We thought if someone had taken her, we thought that hopefully they would look after her, but that’s the saddest thing – they just haven’t looked after her.

‘I feel she was dumped, she’s 11 now, she’s past her breeding days. 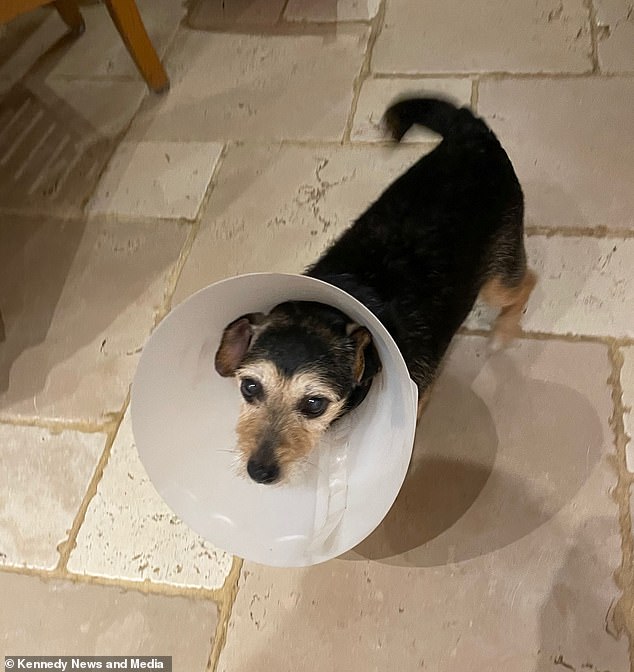 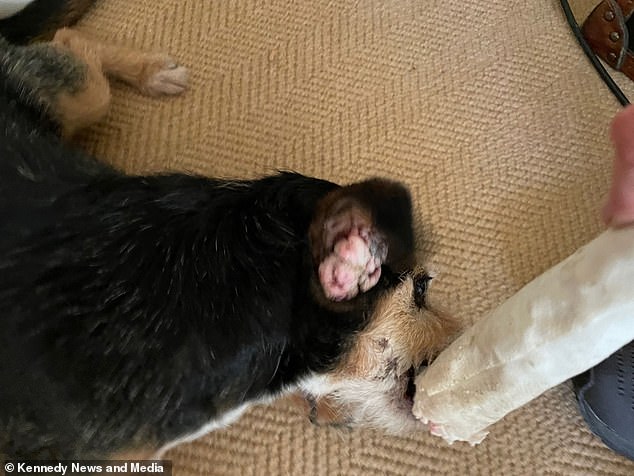 ‘She’s obviously had puppies and she needs quite a lot of medical work now, it doesn’t look like she’s ever seen a vet.

‘Her ears were very infected, really inflamed with massive growths in them.

‘She had an operation on Monday and they said she is completely deaf, poor little thing. If she was taken to the vets earlier, she definitely wouldn’t be deaf now.

‘I think she’s been neglected, it’s criminal they’ve left her ears like that because that is easily solved. She’s going to have to be on steroids now for the rest of her life.’

Crumpet went missing just three months after they brought her home, and the frantic family plastered the area with ‘missing’ posters in the hope that someone would spot her. 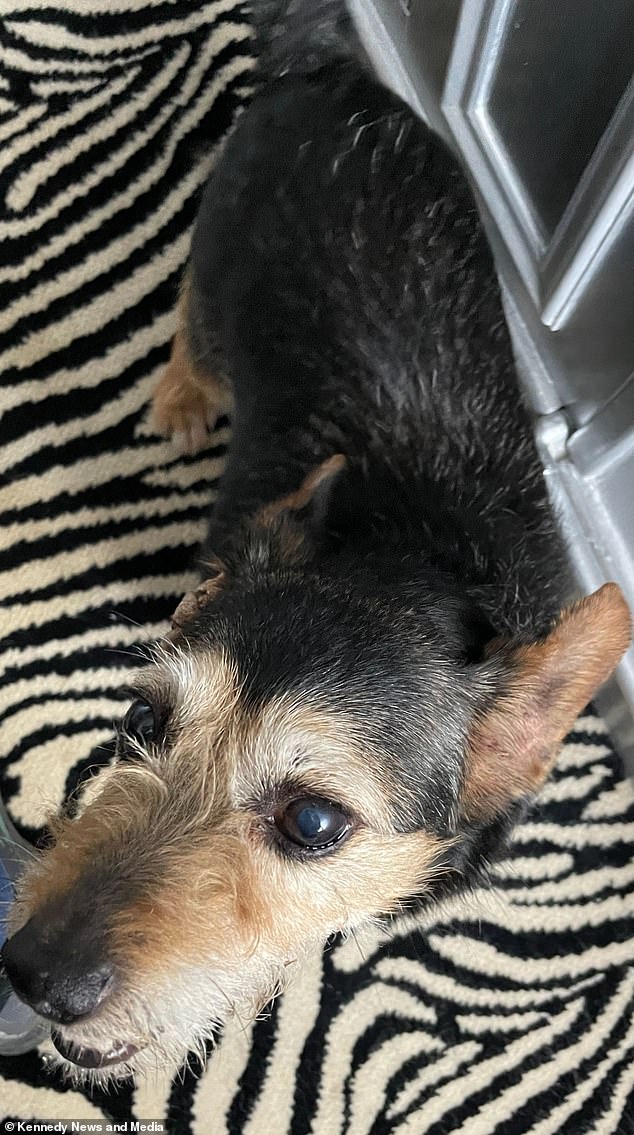 Crumpet, who was found via her microchip, enjoys her new surroundings after being lost for so many years

Mrs Covell said: ‘It would have been very unusual for Crumpet to slip out, she had never done it before and she got very attached to my older dog, who was sort of mothering her and they just went around together.

‘They were like a little twosome. So it was very unlike her to have wandered off, but she was very friendly and I probably wouldn’t have heard if anyone came up my drive.

‘We started driving around, we went to the village, we went down the valleys, that week we made flyers, put them up and I got hold of the Dogs Lost lady.

‘Then I got on to my microchip company and the vets and everybody. And nothing, absolutely nothing, she just vanished.

‘The girls were really upset because we went to choose her and two weeks later we went to pick her up. I felt really guilty she wasn’t with me.’

Despite not knowing what Crumpet’s been through, Mrs Covell says she’s kept her sweet nature and was very friendly with the vets and the family.

Delighted Mrs Covell said the experience shows the importance of having pets microchipped.

Mrs Covell said: ‘It’s a very good lesson for anybody – to get your dog microchipped and keep the details up to date.

‘It’s one of those crazy things, you never know.’