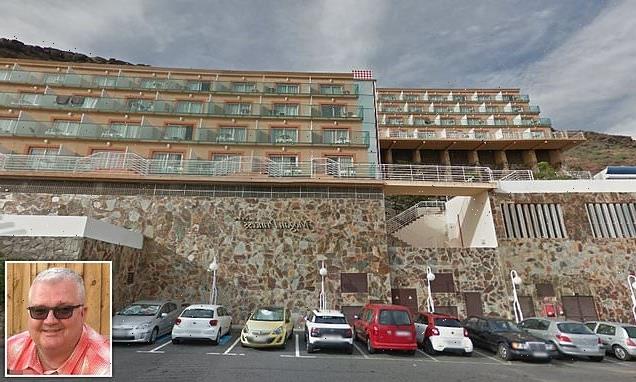 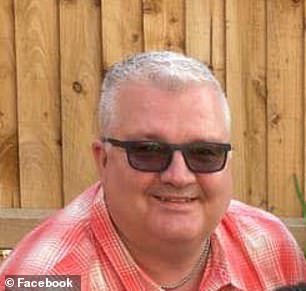 Adam Molyneux-Downs (back left), 49, who was staying with his partner at the hotel in Gran Canaria said the building was shaken after the boulder fell through the roof

An English couple narrowly avoided death in a ‘miracle’ escape after a two-ton boulder crashed through the roof of their Canary Islands hotel just yards from their bed.

Adam Molyneux-Downs, 49, who was staying with his partner at the hotel in Gran Canaria said the building was shaken after the boulder fell through the roof – after asking to be moved room due to another fallen rock just hours earlier.

After hearing the ‘almighty smash’ Mr Molyneux-Downs, from Leamington Spa, Warwickshire, jumped from his bed into a fog of dust – thinking that there had been an earthquake.

But he then found the four foot wide boulder lying outside his room at The Mogan Princess and Beach Club hotel – which had fallen from a rocky cliff backing onto the hotel.

The holidaying father-of-one shrugged it off as a ‘f****** boulda’ and told his partner: ‘Don’t worry about this darling – it’s nothing’.

The couple were unable to open the doorway as the massive impact of the smash hard warped the building, Mr Molyneux-Downs told The Sun.

He said he was first concerned if it had ‘got anybody’, adding that it was a ‘miracle nobody was killed’. 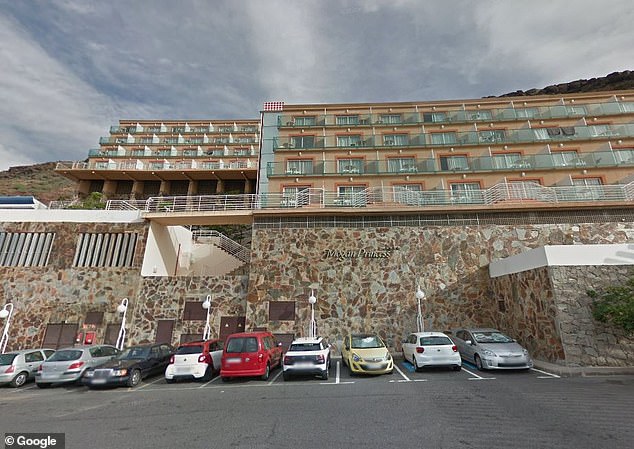 The hotel balcony edge had crumbled under the impact of the fall and caved the floor in below.

After another rock had fallen earlier on their all-inclusive getaway, blinds fitter Mr Molyneux-Downs said he had asked to changed rooms but claimed had been refused by the hotel.

He said he could see where the ‘supposed safety netting’ that holds the rocks in place and come away from the cliff face and that there were ‘more loose sections’.

After the incident he ‘told everyone to pack and get to reception’.

The Mogan Princess and Beach Club hotel, Gran Canaria, told The Sun that guests have been moved elsewhere in the hotel and that Mr Molyneux-Downs was moved to to nearby accommodation.