Last year, countries added a record 118 gigawatts of new solar capacity, or 45 per cent of new electricity generation. Along with wind, the two renewable energy sources accounted for two-thirds of new capacity, compared with only one-quarter for new fossil-fuel power stations. 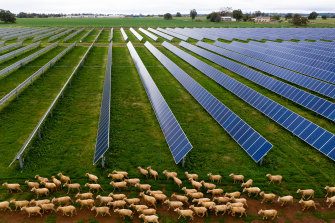 A ‘wave’ of new solar farms across the world has meant renewables accounted for more than two-thirds of extra electricity generation installed in 2019, Bloomberg New Energy Finance says.Credit:Janie Barrett

Australia was among dozens of nations, including India, Italy and the US, where solar power was the dominant new source of electricity. In just the past decade, the amount of solar generation capacity has risen 15-fold to 651 gigawatts globally, overtaking wind last year at 644GW to be the fourth-biggest source of power by capacity behind coal, gas and hydro, BNEF data show.

"It's been mindblowing how rapidly solar has grown," Leonard Quong, head of Australian research at BNEF, said.

Solar's costs continue to fall at the rate of about 24-28 per cent for each doubling of production capacity, or roughly twice the pace of wind, Mr Quong said.

"Given the inexpensive nature of the technology and the limited penetration on a generation basis, BNEF expects the market to continue to grow, with 140-178GW of new solar to be built in 2022," the consultancy said in a new report.

While growing rapidly, solar's generation output remains only a fraction of total electricity because of its lower so-called capacity factor than fossil-fuel plants, which operate day and and night. Last year, solar generated about 2.7 per cent of electricity compared with 0.16 per cent a decade earlier, BNEF said. 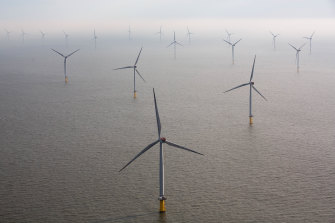 The coronavirus pandemic initially disrupted solar panel output but the industry has since bounced back, faster than wind and other power plant production, Mr Quong said.

"It's been far more positive than we thought at the start of COVID-19," he said.

For Australia, a rapid expansion of new wind and solar investments in recent years will slow sharply this year as the Renewable Energy Target for 2020 is already filled and because uncertainty over energy policy is deterring new spending.

"2020 was always going to be a tough year for new renewable energy investment in Australia," Mr Quong said.

Still, state-based auction schemes such as in Victoria, Queensland and the ACT have provided some certainty that is supporting new wind and solar farms. NSW has also been streamlining investment plans in three large new renewable energy zones.

Another deterrent for investment in new power generation in Australia has been the steep dive in wholesale electricity prices. Average power prices were down more than 60 per cent in South Australia in the first half of 2020 compared with a year earlier, with Victoria reporting a 52 per cent drop and NSW 19 per cent, BNEF said.

Investors, though, would likely have even less incentive to invest in new coal or gas-fired power plant. Such projects, particularly coal, would be "incredibly risky" in part because future efforts to decarbonise the economy could see such assets stranded well before their 40-60 year design life, Mr Quong said.

New solar panels had dropped about 90-95 per cent in cost since Australia last built a new coal fired power station a decade ago, and "those costs are going to continue to fall in the future," he said.