Midnight Oil's Bones Hillman – "the bassist with the beautiful voice" – has died.

The band announced via Twitter that Hillman died at his Milwaukee home in the United States on Sunday after a cancer battle.

"He was the bassist with the beautiful voice, the band member with the wicked sense of humour, and our brilliant musical comrade," the Tweet said.

Born in Auckland in 1958 as Wayne Stevens, Hillman adopted the stage name Bones Hillman in the 1970s.

His first band was punk outfit the Masochists and he later joined the Suburban Reptiles and The Swingers, before replacing Peter Gifford as bass player for rock band Midnight Oil in 1987.

He played with the band for 15 years, before moving with his family to Nashville in 2007. 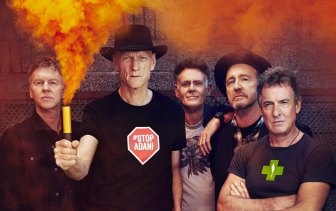 Tributes remembered him as "a lovely lovely man", "a great and kind guy", with amazing vocals.