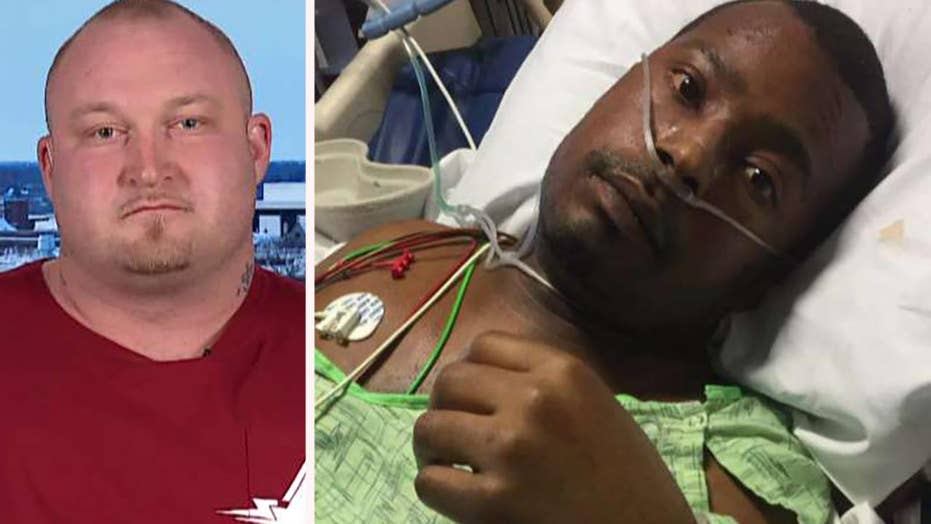 Michigan weightlifter Ryan Belcher is being hailed a hero after helping save a man pinned under a Jeep on the road. Belcher joins ‘Fox &amp; Friends’ to describe what happened.

A Michigan powerlifter was hailed as a hero last week after he helped a man who was pinned underneath a two-ton SUV.

Ryan Belcher, 29, was at the end of his workday Thursday when he heard a loud crash outside. He explained to "Fox & Friends" on Monday he noticed a Jeep Cherokee flipped upside down, and he rushed outside toward the wreckage. When he got there, he found a man trapped underneath the vehicle calling out for help.

MICHIGAN MAN DIES AFTER FALLING INTO TANK OF SULFURIC ACID

"When I first approached the vehicle, there was a good four men there, and they were all trying to move this vehicle and I seen it wasn’t happening and I figured what a better time now to use what I know I can actually do," Belcher said

Belcher, who is 350 pounds with the ability to squat 950 pounds and deadlift another 800 pounds, noticed he could get some leverage on the vehicle to try to move it off the man whose lower body was still inside the vehicle and his upper body smashed up against a speed limit sign.

“I just jumped right in," he said "I seen a window that was broken out of the back of the vehicle and I knew if I can swing the vehicle in a certain direction I can free him from that pole. So, I just stuck my arms in and I don’t know I just grabbed it, lifted it up and started pushing and all I heard was that’s enough we can get him.”

The man Belcher saved and another woman suffered serious injuries in the crash. No fatalities were reported.

Belcher said he met with the man and his family Sunday and was praised for his heroic actions.