New York: As Donald Trump was in Vietnam trying to halt the rise of a new nuclear state, the President's former personal lawyer was back home hurling verbal hand grenades at his one-time boss.

Michael Cohen's appearance before Congress was such a big deal in the US capital that bars opened early so people could watch it on big screens.

Expectations were high among Democrats that this would be a politically disastrous day for Trump. 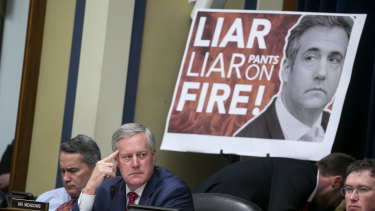 A poster on display during Michael Cohen’s testimony to Congress.Credit:Bloomberg

Cohen, after all, served as Trump's right-hand man for a decade: if anyone could dish the dirt on Trump this was the guy.

But while Cohen's testimony was undoubtedly embarrassing for Trump, it is unlikely to do much long term damage.

Being described as a “racist”, a “conman” and a “cheat” by a former close ally – as Cohen labelled Trump in his opening statement – would usually be calamitous for a president. But these aren't normal times and Trump isn't a normal president.

The hearing was explosive as a form of political theatre, but mostly fizzled when it came to un-earthing new facts. This was largely the fault of Democrats on the committee, whose questioning proved unfocused and ineffective.

In fact, many of the day's key revelations aided rather than undermined Trump.

On the big question that has loomed over Trump since day one of his presidency – did he or his campaign team collude with Russia – Cohen had nothing much to offer.

"Questions have been raised about whether I know of direct evidence that Mr Trump or his campaign colluded with Russia," he said. 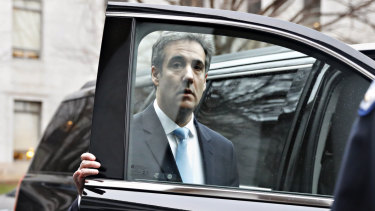 Cohen leaves the committee after testifying.Credit:AP

Given how close Cohen was to Trump it's difficult to imagine he would not have been aware of any high-level collusion between his boss and Vladimir Putin.

Cohen did claim that Trump had advance warning from adviser Roger Stone about a WikiLeaks dump of Clinton campaign emails in June 2016. If so, then both Stone and Trump lied about this.

But it's not necessarily of huge significance: Julian Assange had already said publicly that another email release was on the way.

And what about the infamous "pee tape" detailed in the Steele dossier? (The story that the Russian government has possession of a video of Trump engaging in a sexual act involving urination in a Russian hotel room.)

"I have no reason to believe that tape exists," Cohen said.

Cohen also, for the first time, publicly debunked a bombshell BuzzFeed report that Trump had instructed him to lie to Congress about his plans to build a giant tower in Moscow. If true, the revelation would have exposed Trump to serious legal risk.

"Mr Trump did not directly tell me to lie to Congress," Cohen said. "That’s not how he operates."

Meanwhile, Cohen's references to racism and test scores were darts carefully aimed at Trump's most sensitive parts (Trump has described himself as "the least racist person you've ever met" and boasted about his high IQ).

But if there's anyone left in the US surprised by the idea of Trump telling a lie or saying something offensive they must have been comatose for several years.

Trump's opponents already thought he was a scoundrel. And his supporters will easily dismiss Cohen's testimony given he has admitted to lying to Congress in the past.

While Trump was no doubt annoyed and distracted by Cohen's character assassination, he should also be relieved. This was more flesh wound than a fatal blow.