After Congress failed to pass a spending bill by Friday night, Twitter users are lightening the mood with hilarious memes of the government shutdown.

And critics are casting blame on Senate minority leader Chuck Schumer, who’s been a longtime critic of Trump’s wall, calling the crisis the #SchumerShutdown.

Social media users are also poking fun at the president himself for refusing to budge.

One Twitter user posted a picture of a cop with his armed raised saying ‘Sorry folks, America’s closed!’

Another Twitter user shared a picture of Trump smiling and golfing at his Mar-a-Lago estate with Russian president Vladimir Putin with the caption ‘Government Shutdown? You mean BFF golf vacation!’ 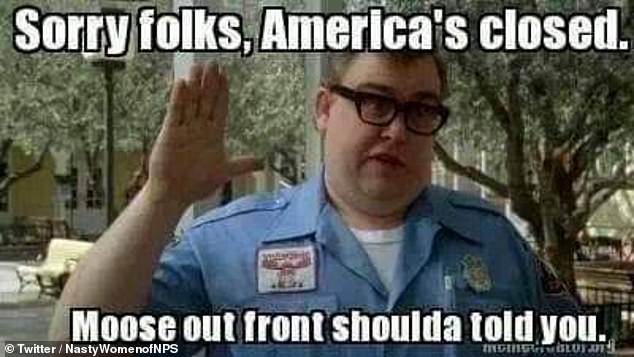 One Twitter user posted a picture of a cop with his armed raised saying ‘Sorry folks, America’s closed!’ in light of the government shutdown starting Saturday morning 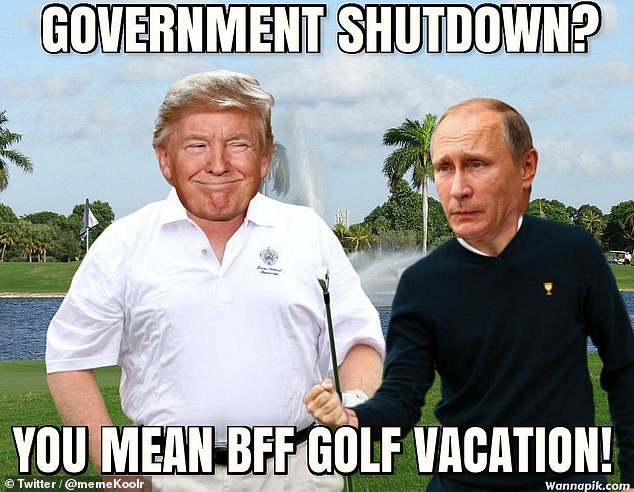 Twitter users are sharing hilarious memes of the government shutdown, this user joked that Trump’s out golfing with Putin in the midst of the chaos 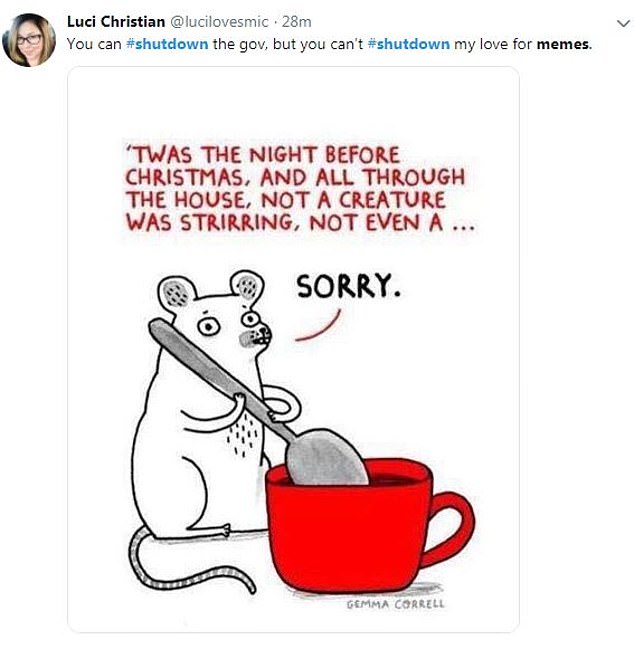 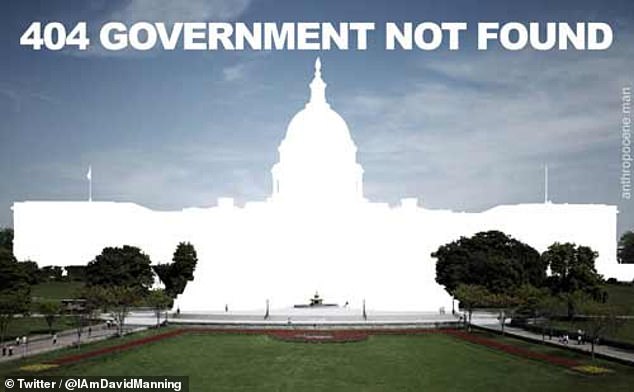 This Twitter user completely whited out the Capitol after the government shut down on Friday at midnight, leaving thousands without pay or on unpaid leave 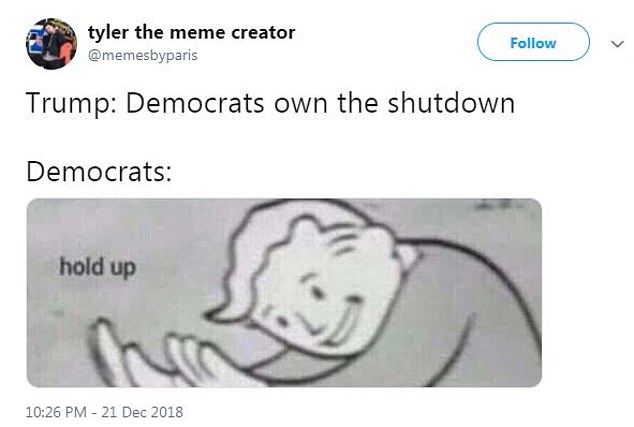 Trump kept saying that the Democrats own the shutdown, but this Twitter user says the Democrats don’t actually hold any power in their hands 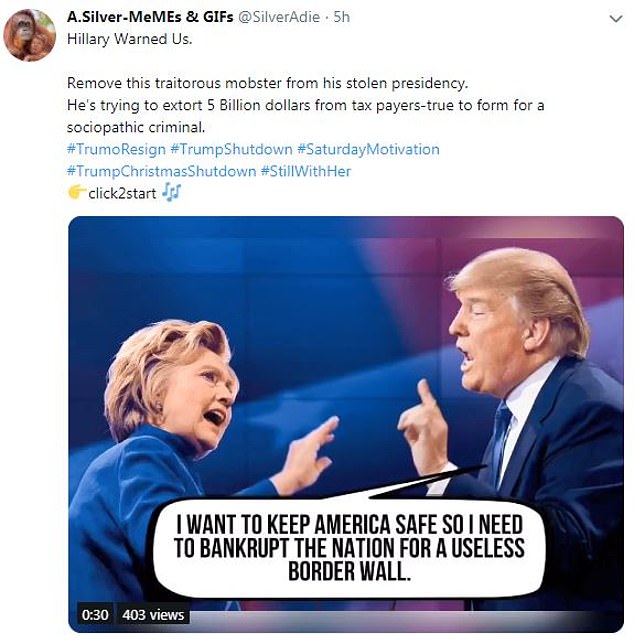 Another tweeted: ‘Hillary warned up!’ giving Trump a speech bubble saying ‘I want to keep America safe so I need to bankrupt the nation for a useless border wall’.

One person shared a Christmas meme joking: ‘Twas the night before Christmas, and all through the House, not a creature was stirring, not even a mouse’.

One savvy Photoshop expert posted a picture of a whited out White House with the caption ‘404 Government Not Found’.

One fan made fun of Trump who said the Democrats own the shutdown by posting a man holding nothing in his arms with the label ‘Democrats’.

Many also pointed fingers at Schumer saying this is his second time bringing the nation to a shutdown.

‘His new name. #ShutDownSchumer. This is 2x in a row Schumer has caused a shut down,’ one Twitter user wrote.

‘@SenSchumer is at it again. Which will he choose? An open government and funding to secure our border, or more political games? #SchumerShutdown’ 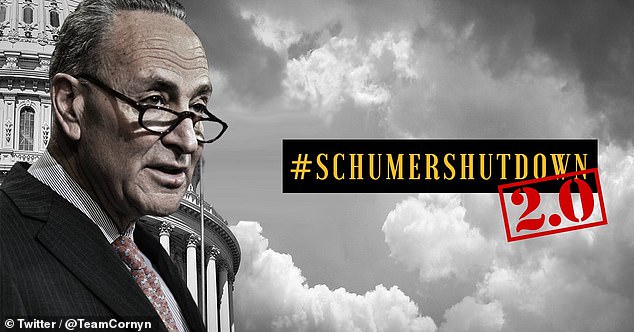 Critics are casting blame of the government shutdown on Senate minority leader Chuck Schumer, who’s been a longtime critic of Trump’s wall and was responsible for a shutdown earlier in the year 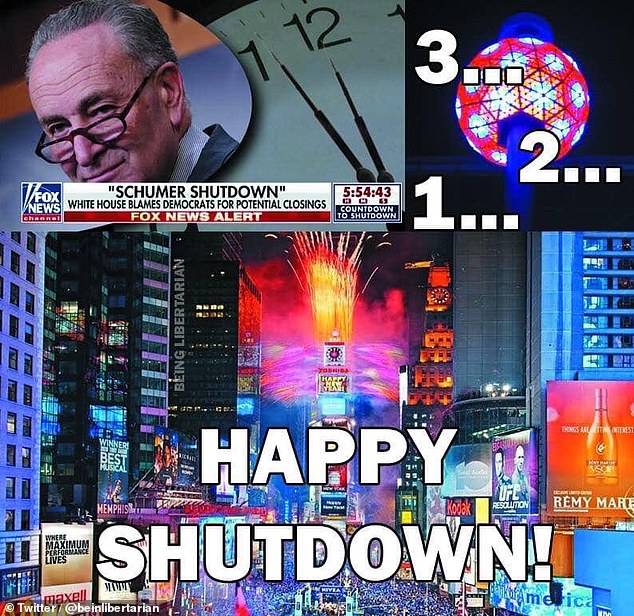 Happy Shutdown! This meme makes fun of the New York senator who led to the ‘Schumer Shutdown’ by refusing to give in to Trump’s demands for a $5billion border wall

Check out the new name: This Twitter user joked that the New York senator might as well be called #Shutdown Schumer for his bill-stopping stints 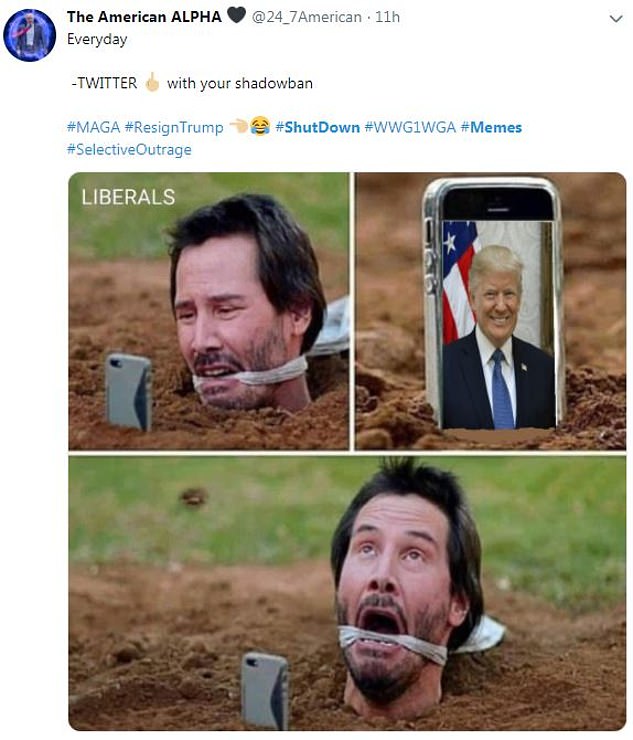 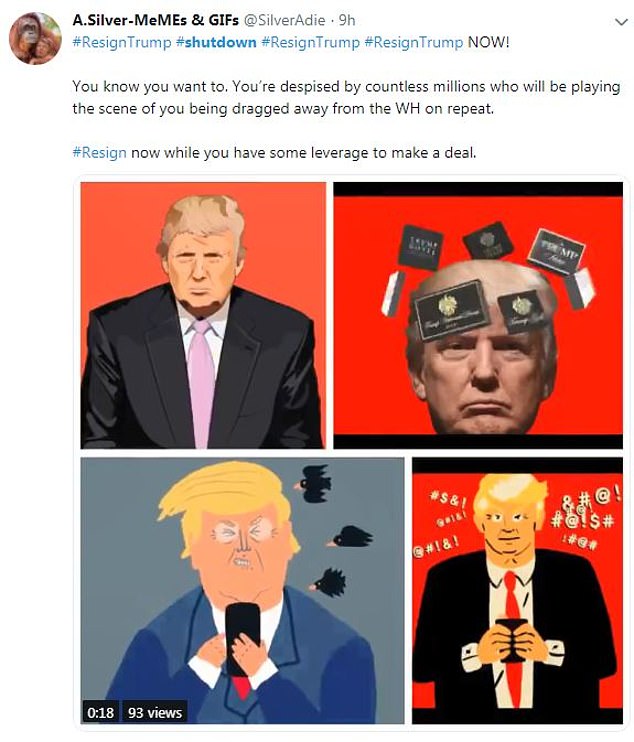 Resign now! Many Angry Twitter users demanded the president resign after letting the government shut down 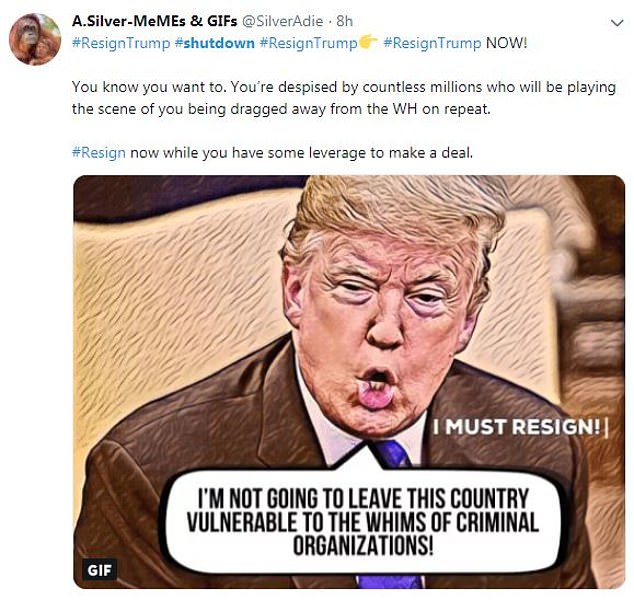 Not leaving! This meme shows Trump saying ‘I’m not going to leave this country vulnerable to the whims of criminal organizations’ while his own foundations are under investigation for criminal activity 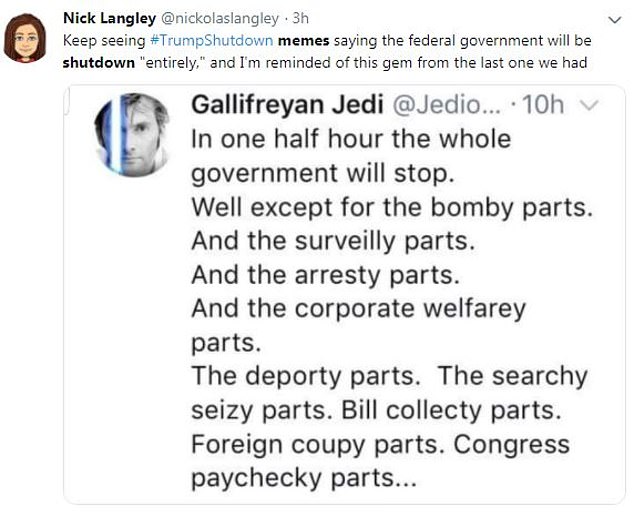 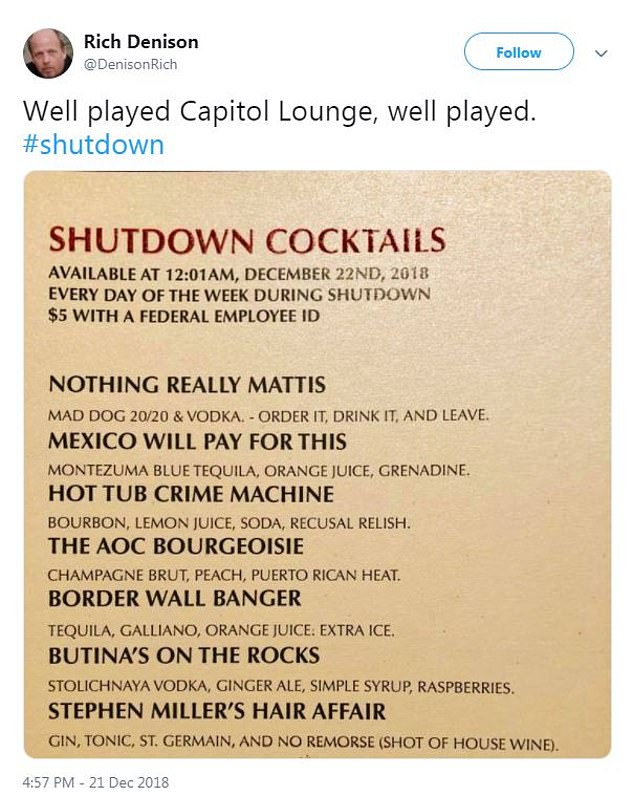 Drinking the pain away! One fan posted the drinks menu at the Capitol Lounge where cocktails were named after the shutdown with options including ‘Nothing Really Mattis’ and Mexico Will Pay For This’

One Twitter user made a New Years eve countdown meme showing the ball drop in New York with the Schumer’s face and the caption ‘3…2…1…Happy Shutdown!’

Others made fun of Trump who let threw a ‘temper tantrum’ and let the government shut down all because he refused to settle for anything less than $5billion for the wall.

‘Instead of #TrumpShutdown, how about we #ShutdownTrump,’ one Twitter user said.

Another posted a picture of Trump and his kids Ivanka, Don Jr and Eric and the caption ‘Treason’s Greetings’. A voice bubble from Ivanka says: ‘You should think about resigning’.

One fan posted the drinks menu at the Capitol Lounge where cocktails were named after the shutdown with options including ‘Nothing Really Mattis’, Mexico Will Pay For This’, ‘Hot Tub Crime Machine’, ‘Border Wall Bander’ and ‘Stephen Miller’s Hair Affair’.

One meme showed Trump on the phone with an operator saying ‘Hello my government isn’t doing what I told it to do.’ The operator responds ‘Have you tried turning it off and on again?’

Trump’s eyes then widen, alluding that he shut down the government for that very reason.

American journalist Bill O’Reilly joined the fun sharing a picture of himself with St. Nick saying ‘They can’t shutdown Santa!!!’ 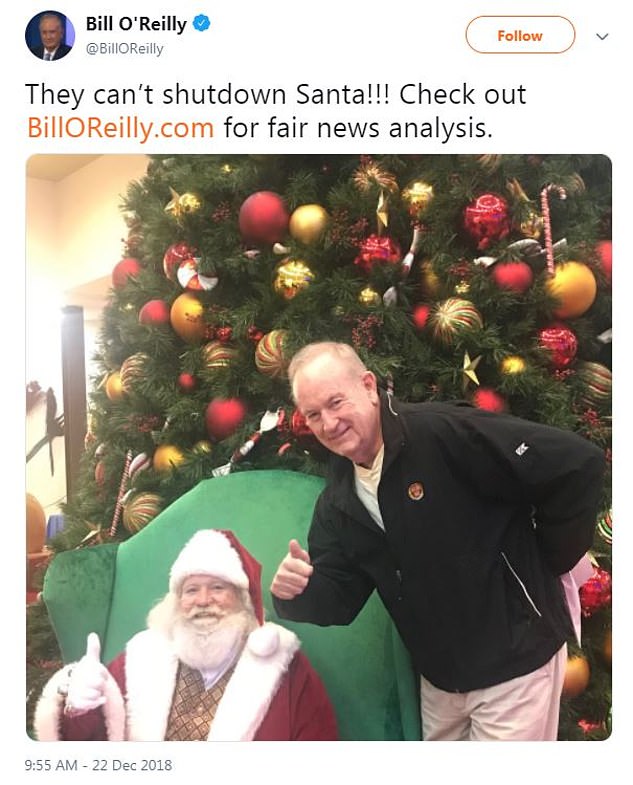 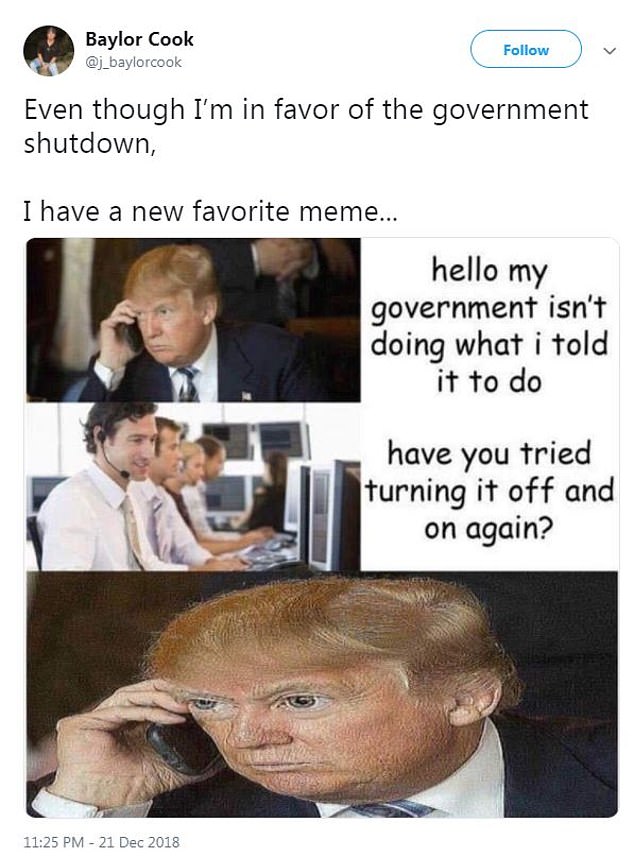 Hello, operator? This Twitter user joked that Trump shutdown the government as if it was a computer to turn on and off again in order to work 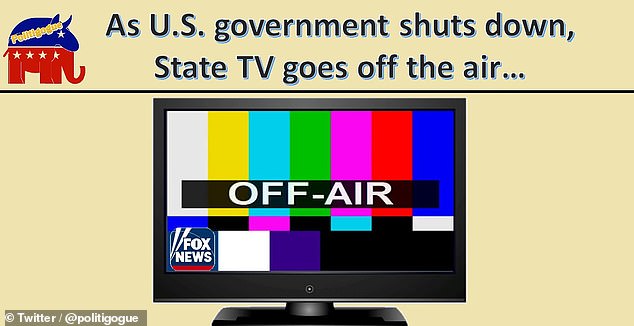 At least we have Netflix! This Twitter user pointed out that state funded TV would go off air