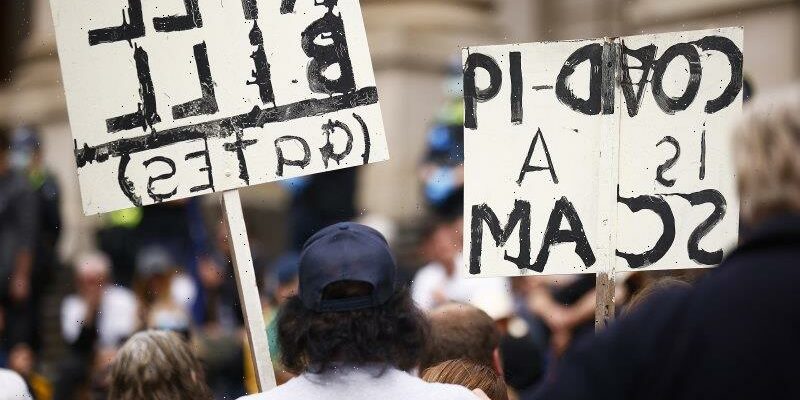 Analysts of the growing anti-lockdown movements and the COVID-sceptic movement in Australia, particularly in Melbourne, are increasingly missing the wood for the trees, as media and commentators doggedly search for far-right influence. There is a preoccupation with the notion that COVID-scepticism is a “gateway” to far-right extremism that misses the crucial point: these movements are already extreme.

They’re just not predominately far right. In fact, the movements as a whole don’t have any coherent ideology at all. That doesn’t make them less radical or less concerning. Over the past several months I have watched the rapid escalation and radicalisation of the anti-lockdown, anti-vaccine and COVID-sceptic movements in Australia. During the long, painful lockdowns in NSWs and Victoria, anti-lockdown and conspiracy communities on social media have experienced enormous growth. 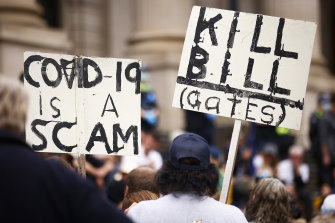 Protesters on the steps of Victoria’s Parliament.Credit:Getty Images

Existing anti-lockdown Facebook groups and Telegram channels have doubled or even tripled in size, and a multitude of new groups and channels have sprung up. Tens of thousands of social media users have been sucked into conspiracy theories, in some cases for the first time.

As we’ve seen in many countries around the world, the stresses and traumas of lockdown are often accompanied by a boom in conspiracy theories. As such, it seems almost inevitable that it is Melbourne, where the pain of the pandemic and successive, prolonged lockdowns has been felt more deeply than anywhere else in the country, which is now the locus of these movements in Australia.

Implicit and explicit calls for violence, particularly against politicians, are becoming increasingly common. This rhetoric is bleeding off the screen and into the real world, as the streets of Melbourne and Sydney have become the scenes of intense and in some cases violent protests.

Many in the media have begun hunting for links between these protesters and the far right. They speculate, often without presenting any hard evidence, that a shadowy far-right influence was responsible for causing the protests, or alternatively is using the protests as a recruiting ground. The presence of known individuals with links to the far right at protests has been highlighted as proof of their influence over the movement, despite these being just a handful of attendees among protests of thousands.

To be clear, there is a far-right element involved in the anti-lockdown movement. While this element is very much a minority, its role is nonetheless concerning and should be watched carefully. However, the disproportionate focus on the potential threats of far-right extremism often seems to overlook the elephant which is already in the room, stomping around and trumpeting loudly and knocking things over: conspiracy extremism.

The tenor of the discussion in many (although not all) of the anti-lockdown Telegram channels is every bit as heated, and often as violent, as many far-right channels. The steady drumbeat of threats against politicians, public figures, health officials and journalists has normalised the use of violent language and imagery, in much the same way as such language and imagery is normalised in far-right social media communities. That violent language and imagery is increasingly making its way into the protests on the ground. For example, the speaker who referenced, on microphone, hanging Victorian Premier Dan Andrews as a “joke” or the protester who brought along a mock gallows to the November 13 protest in Melbourne.

At another Melbourne protest days earlier, a young man with a crossbow was arrested after jumping on top of a car outside the State Parliament. The escalation towards extremism is abundantly clear. Just as clearly, it is not being driven by any coherent political ideology at either end of the left-right spectrum. It is not the result of many hours of considered contemplation of political philosophy. It is fuelled by frustration, alienation, and conspiracy theories.

The ideological shallowness of these movements does not lower the risks associated with them. A violent act fuelled by a profound belief that there are Satanic microchips being injected into children via COVID-19 vaccines could be every bit as dangerous to targets and bystanders as an attack fuelled by white supremacist beliefs.

Anti-lockdown movements are complex and multi-faceted. They draw people from a broad range of backgrounds and beliefs, who sit at very different points on the spectrum of risk when it comes to extremism. The majority of anti-lockdown protesters are not likely to participate in violent forms of extremism, but a handful may be. Responding effectively to such concerns requires a clear-eyed analysis of what the extremist risks are within that broader movement. Rather than fixating on the role of the far right, it is far past the time that we started to take conspiracy extremism seriously in its own right.