Lai’s return to the office comes after he walked free on bail Wednesday, over 40 hours after he and other critics of China were rounded up by police as part of a widening crackdown on dissent.

His return was livestreamed by his colleagues, who cheered and clapped as he walked through the newsroom. 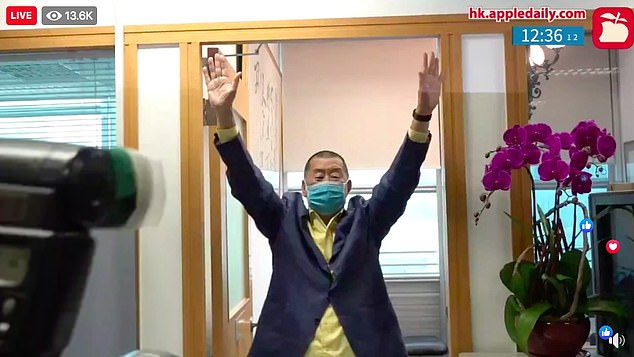 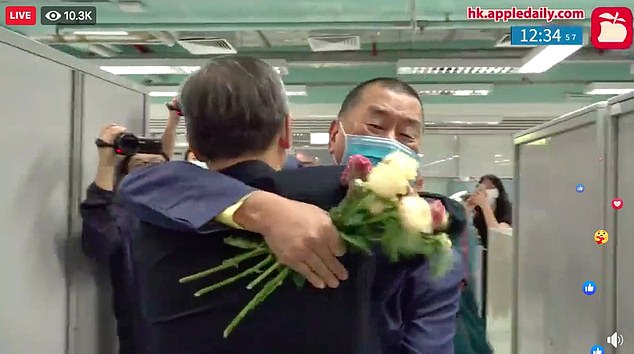 He stopped to embrace his chief executive officer, Cheung Kim-hung, who was also arrested during the crackdown 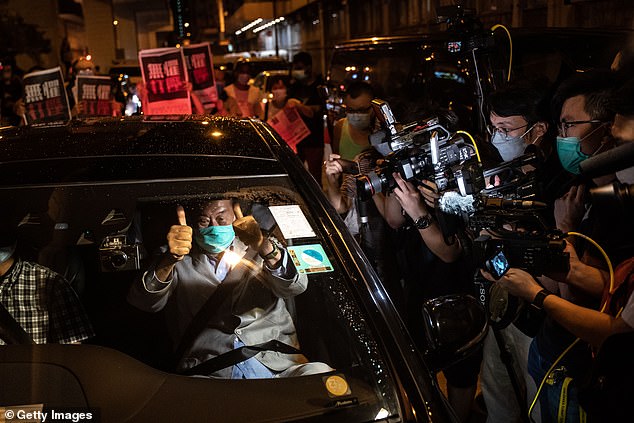 Jimmy Lai, who was arrested on Monday under the new national security law, leaves Mong Kok police station after being released on bail on August 12

He stopped to embrace his chief executive officer, Cheung Kim-hung, who was also arrested during the crackdown.

Earlier in the day, Lai was swarmed by a crowd of journalists and cheering supporters as he left a police station on bail, some of whom waved copies of his Apple Daily in a show of their backing.

A clampdown has gathered pace in Hong Kong since China imposed a sweeping security law in June, with opposition politicians disqualified and activists arrested for social media posts. 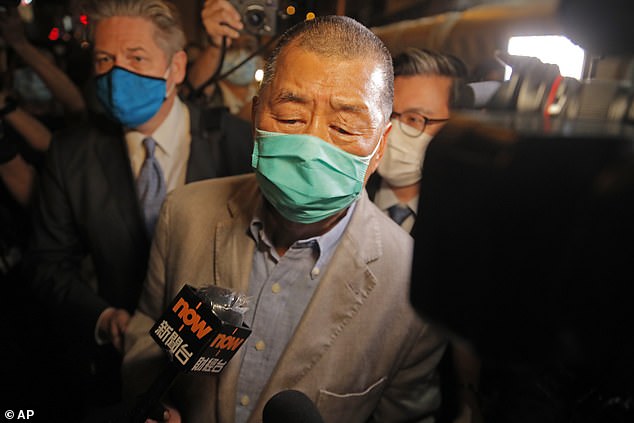 Hong Kong media tycoon and newspaper founder Jimmy Lai, centre, walks out from a police station after being bailed out in Hong Kong, Wednesday 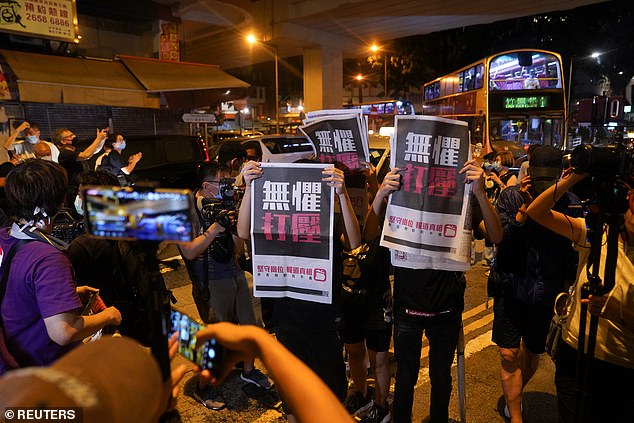 Supporters hold copies of Apple Daily newspaper outside a police station to support media mogul Jimmy Lai Chee-ying, founder of Apple Daily, as he is released on bail 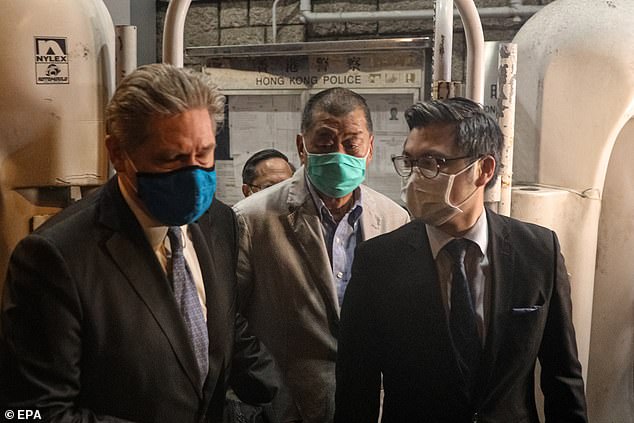 Hong Kong media tycoon and founder of Apple Daily, Jimmy Lai (C) leaves a police station after he was released on bail. He was released following his arrest the previous day under the new national security law

The moves have provoked outrage in the West and fear for millions who last year took to the streets to protest communist China’s tightening grip on the semi-autonomous city.

In one of the most dramatic days of the crackdown, Lai was among 10 people detained under the new law on Monday as around 200 police officers searched the newsroom of his tabloid, which is unapologetically critical of Beijing.

Lai did not address the crowd upon his release, but he flashed a thumbs up as he was bundled into a car that inched away through the crowd. 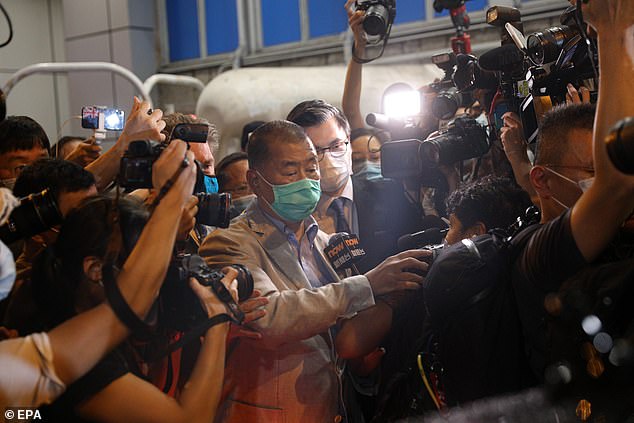 In one of the most dramatic days of the crackdown, Lai was among 10 people detained under the new law on Monday. Above, Hong Kong media tycoon and founder of Apple Daily, Jimmy Lai (centre) is surrounded by members of the media as he leaves the police station 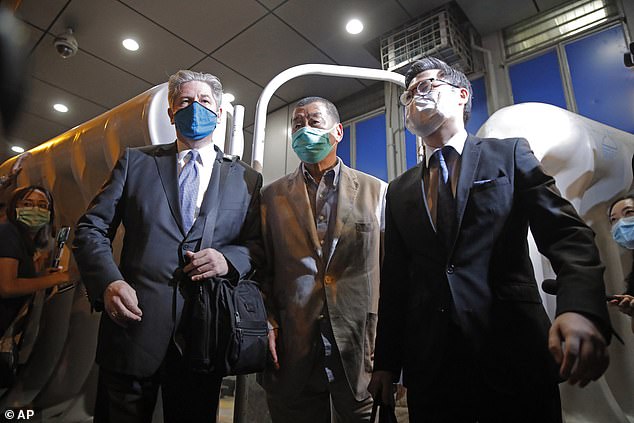 Lai did not address the crowd upon his release, but he flashed a thumbs up as he was bundled into a car that inched away through the crowd 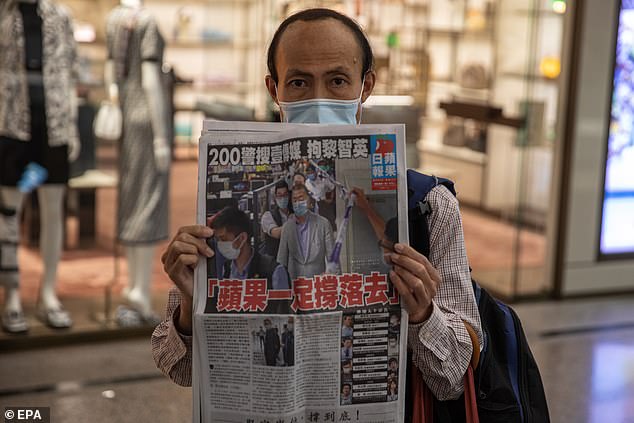 A supporter of media tycoon and founder of Apple Daily Jimmy Lai holds a copy of the newspaper during a ‘sing along protest’ in a shopping mall in Hong Kong, China on August 11

In a display of solidarity for Lai, people in the city rushed to buy Tuesday’s Apple Daily, with the newspaper saying it had upped its print run to 550,000 from the normal circulation of 70,000.

One restaurant owner bought 50 copies at a newsstand in the commercial district of Mong Kok and said he planned to give them away free of charge.

‘Since the government doesn’t allow Apple Daily to survive, then we as Hong Kongers have to save it ourselves,’ the man, who gave his surname as Ng, told AFP, as dozens of people lined up around the city from the early hours.

The newspaper’s front page showed a picture of Lai being led away in handcuffs, with the headline ‘Apple will fight on’.

Lai’s arrest sparked a buying spree in shares of his media group, and between Monday morning and closing time on Tuesday its stock value had risen by more than 1,100 percent. 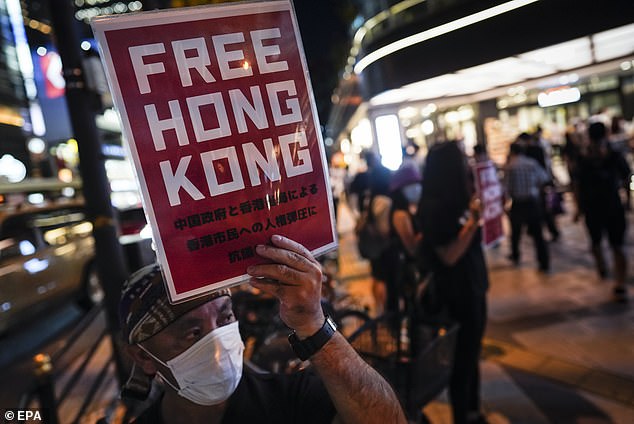 Japanese protester holds up a placard as he protests against the Chinese and Hong Kong governments for arresting pro-democracy activists, in Osaka, western Japan, on August 12

The most serious crimes under the law – which was introduced on June 30 and is not supposed to be retroactive – carry up to life in jail.

Similar laws are used on the authoritarian mainland to snuff out opposition.

Lai, 71, was held on charges including colluding with foreign forces and fraud. The operation was hailed by Beijing, quick to declare him an ‘anti-China rabble-rouser’ who conspired with foreigners to ‘stir up chaos’.

Among the others arrested were two of Lai’s sons, young pro-democracy activist Agnes Chow and Wilson Li, a former activist who works as a freelancer for Britain’s ITV News.

‘It’s very obvious that the regime and the government are using the national security law to suppress political dissidents,’ she told reporters after her release.

Critics believe the security law has ended the key liberties and autonomy that Beijing promised Hong Kong could keep after its 1997 handover by Britain.

US Secretary of State Mike Pompeo described Lai’s arrest as ‘further proof’ that Chinese authorities had ‘eviscerated Hong Kong’s freedoms and eroded the rights of its people’. 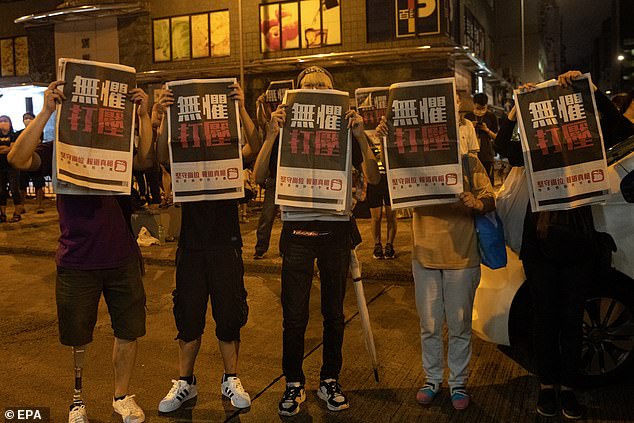 ‘We’re going to respond in real ways,’ Pompeo later promised in an interview with Newsmax.

The United States has already imposed sanctions on a group of Chinese and Hong Kong officials – including city leader Carrie Lam – in response to the crackdown.

Hong Kong’s police said those arrested were part of a group that had previously lobbied for foreign sanctions.

In response to objections made by Hong Kong’s Foreign Correspondents’ Club to the arrests, the Chinese foreign ministry warned that ‘eagerly justifying Jimmy Lai is nothing short of siding with the forces sowing trouble in Hong Kong and China at large’.

‘We call on the FCC, Hong Kong to respect the facts, distinguish right from wrong, and stop smearing under the pretext of press freedom the implementation of the National Security Law,’ it said.