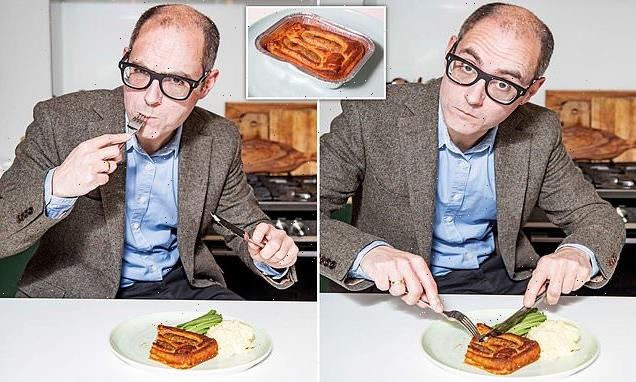 Toad in the hole lot of trouble! Meat eaters are seeing red over vegan alternative because ‘real’ Yorkshire pudding is made with eggs… But how good does it actually taste?

But the arrival of a vegan ‘toad in the hole’ – with no real sausages and a dairy-free, plant-based Yorkshire pud – has really given them the gripes.

They are demanding the product be renamed because it is not true to the original. However, vegans have hit back in what has become an increasingly ugly row, even accusing lovers of traditional toad in the hole and Yorkshire puds of ‘condoning animal torture’.

As Britain is making its way through ‘Veganuary’, food makers, supermarkets and restaurants are releasing vegetarian and vegan versions of family favourites. 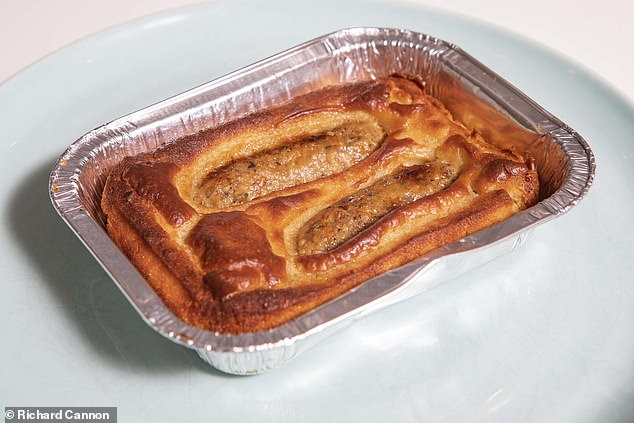 The arrival of a vegan ‘toad in the hole’ – with no real sausages and a dairy-free, plant-based Yorkshire pud – has really given them the gripes

The offending dish comes from The Real Yorkshire Pudding Co, based in Doncaster, which also makes millions of meals using traditional recipes. The batter has no milk, eggs, lard or beef dripping while pork in the sausages is replaced by plant-based alternatives, mainly textured soya.

The firm is confident the vegan toad in the hole – which it promotes under the banner – ‘Free from meat, full of flavour’ – will prove popular.

However, it seems some traditionalists would beg to differ.

Helen Lambert complained: ‘It’s not real meat. Full of nasty chemicals to taste like meat.’ And Paul Graham Wilson said: ‘Why do vegans and vegetarians feel the need to appropriate the names of meat-based foodstuffs? If the veggie version is so appetising, surely it will sell based on its intrinsic wholesomeness, value and taste.’

Josephine Anderson added: ‘Yorkshire puddings are made of eggs, milk and flour. No vegan Yorkshire will be a substitute for a real Yorkshire.’

Bill Howson, boss at Real Yorkshire Pudding Co, said: ‘Our first aim is to make great products that people enjoy eating and we want to be as inclusive as possible.

‘If you look at Wikipedia to see the essence of a toad in the hole, it is described as sausages in Yorkshire pudding batter. That is what we have in vegan form.’

It’s not so bad (confesses a carnivore) 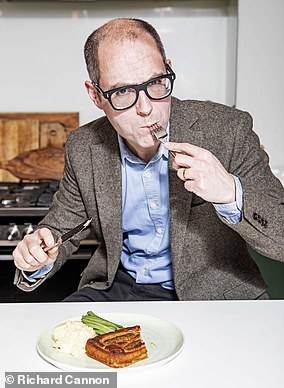 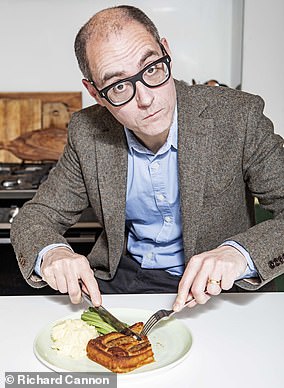 Remarkably, after its 12 allotted minutes in the oven, the dish looks pretty close to the real deal

To me, a carnivore, a vegan toad in the hole sounds as much fun as having root canal work undertaken by a blind dentist.

As the great cookery writer Nigel Slater says of this classic British dish: ‘The recipe stands or falls by the quality of the sausage you use.’

If your sausage is made of – among other weird ingredients – textured soya protein, coconut and shea fat, methylcellulose and tapioca starch, the recipe is surely going to fall, precipitously, to the bottom of a dark hole where good food goes to die. Toad in the hole should be about fabulous sausages oozing their fatty juices into a light, fluffy but comforting batter. The perfect winter dish.

A vegan ersatz version could never come close. Could it?

Remarkably, after its 12 allotted minutes in the oven, the dish looks pretty close to the real deal.

The sausages are not anaemic, the batter is golden. Has it risen into wonderful pillows of heaven? No, but it smells fairly inviting. Even more amazingly, it tastes OK. The sausage is more Paxo stuffing than pure Lincolnshire but it’s better than many vegan ‘soy sausages’ I have tried.

The batter, without any egg, is definitely more dense and stodgy than a great Yorkshire pudding should be, but it has a nice crust and a tasty hint of floury sweetness. I meant to try just a corner but ended up eating it all.

Is it gourmet fare? No, it isn’t. But it knocks the socks off many ready meals in the supermarket – with or without meat.