May joins forces with Boris to condemn ‘disastrous’ Brexit referendum calls: PM and rival warn that second ballot to overturn 2016 result would be a ‘betrayal’

Theresa May is forging an unlikely alliance with bitter rival Boris Johnson today condemning the idea of a second referendum.

The PM is launching a searing rebuff to those mooting another national ballot as a way through the mounting political crisis – thought to include some of her own Cabinet and closest aides.

In a bid to kill off the prospect, Mrs May will tell MPs it would cause ‘irreparable damage’ to Britain.

And the warning has been echoed by Mr Johnson, who insisted anyone backing a fresh referendum was ‘out of their minds’ and it would create ‘feelings of betrayal’ among millions of voters.

The united front with the former foreign secretary comes amid a desperate scramble to find a way through the Brexit deadlock.

With seemingly no hope of Mrs May’s deal making it through Parliament, Cabinet ministers are openly floating other approaches.

Amber Rudd today risked directly contradicting the PM by insisting ‘nothing should be off the table’ if the government’s plan is rejected by the Commons. 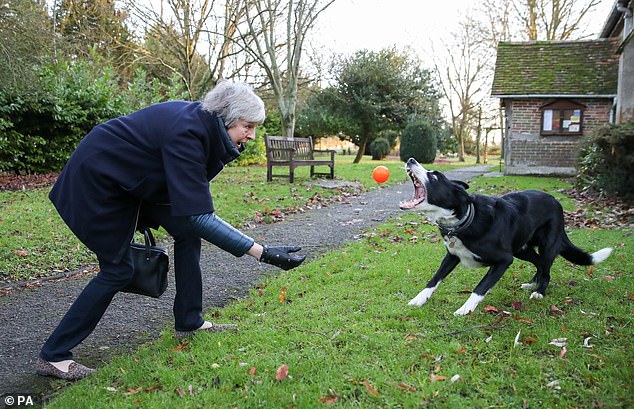 Theresa May will warn today that a second Brexit referendum would cause ‘irreparable damage’ to Britain, as she tries to defuse anger at the news that her own aides have floated the idea. Pictured, Mrs May throws a ball for a border collie called Blitz as she and her husband Philip leave following a church service near her Maidenhead constituency yesterday 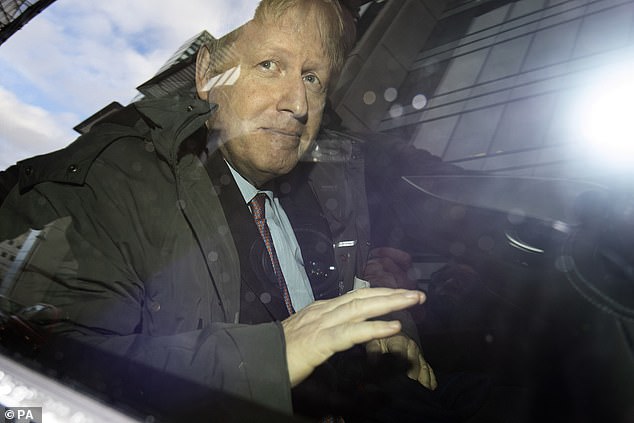 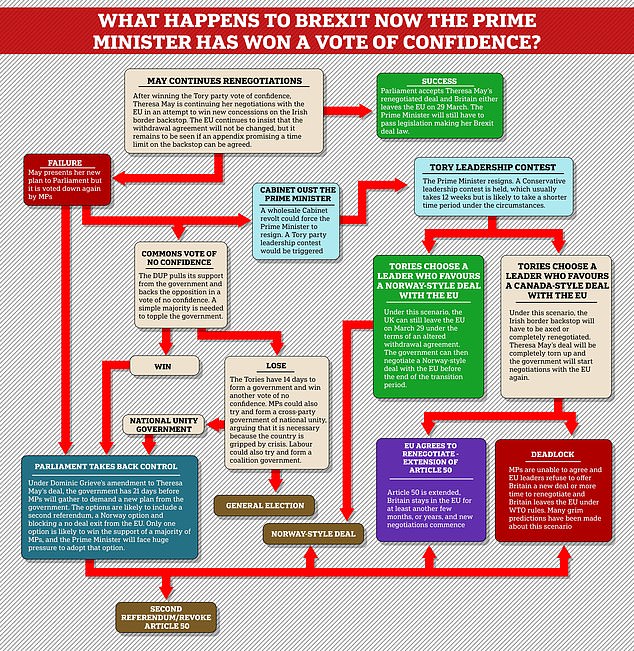 One group, including Philip Hammond, Greg Clark and Ms Rudd, are pushing for the Commons to be allowed to vote on a range of options, including holding a second referendum to a Norway-style relationship.

In the clearest public statement yet, Mr Clark told the BBC today that if Mrs May’s deal falls ‘Parliament should be invited to say what it would agree with’.

He cautioned against a second referendum, saying it would ‘continue the uncertainty for many more months’.

Ms Rudd said this morning that Parliament should be allowed to express its will and ‘nothing should be off the table’.

But harder line Brexiteers believe an ‘options’ vote would just be cover for delaying or cancelling Brexit.

They are urging a ‘managed’ no deal exit – which could involve paying the EU for a transition period and limited agreements to limits the worst effects of crashing out.

As the wrangling continues, Home Secretary Sajid Javid is understood to be among ministers who are pressing Mrs May to activate large scale no-deal planning – on the basis that the outcome must now by the central assumption for the government.

Mrs May is due to gather senior ministers in Downing Street for an informal discussion on the situation – before what could be a crucial full meeting tomorrow morning.

Despite hitting a brick wall of EU resistance to improving her Brexit deal at a summit last week, Mrs May is still hoping to get tweaks and wants to delay a crunch vote on the package until after Christmas.

Labour is holding off on staging a no-confidence vote in the government until after the deal is defeated, although many of its MPs are furious that Jeremy Corbyn has not already tried to strike.

In the Commons this afternoon, Mrs May will all but rule out holding a second vote while she remains in charge.

Another referendum would ‘likely leave us no further forward than the last… and further divide our country at the very moment we should be working to unite it’, she will warn. 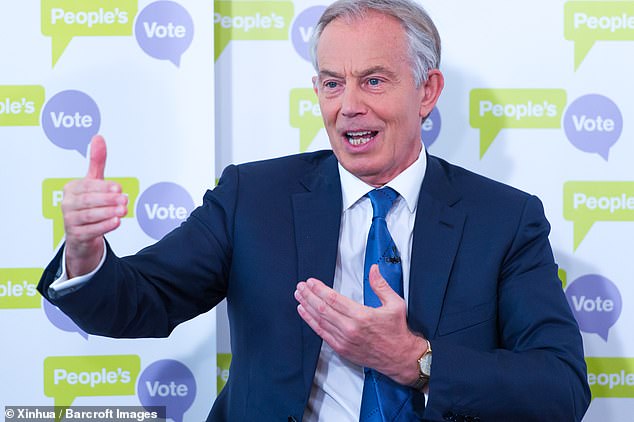 She will add: ‘Let us not break faith with the British people by trying to stage another referendum, another vote which would do irreparable damage to the integrity of our politics, because it would say to millions who trusted in democracy that our democracy does not deliver.’

Her intervention comes amid mounting anger over the revelation that chief-of-staff Gavin Barwell and deputy David Lidington had backed the idea of a second referendum.

MPs and ministers reacted furiously to reports yesterday that Mr Barwell had told colleagues a second poll was ‘the only way forward’ in the light of opposition to her Brexit deal.

In social media messages yesterday, Mr Barwell said he was not planning for a second referendum.

Mr Lidington also raised eyebrows after it emerged he held secret talks last week with Labour MPs in favour of another poll.

Despite the denials, Cabinet sources complained that the rumours had the ‘ring of truth’.

‘Instead we have displacement activity designed to distract from last weeks failed renegotiation.

‘And a concerted attempt to discredit every plausible alternative as they run down the clock. This is not in the national interest.’ 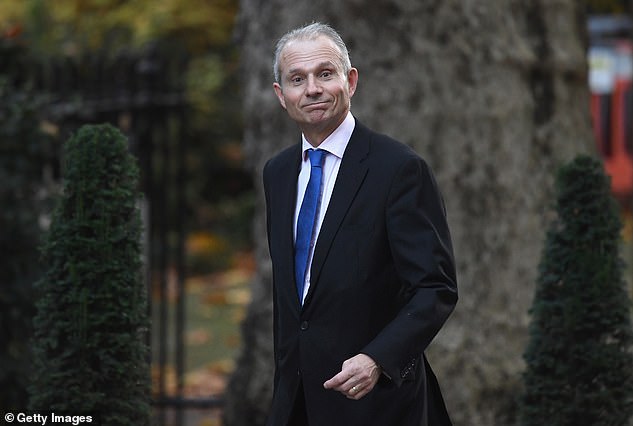 The news is embarrassing for Mrs May, who insists her Brexit deal is still alive and who has launched a blistering attack on Tony Blair for backing a second referendum.

In his Telegraph column today, Mr Johnson said if it was true that Downing Street aides had really been discussing a second referendum ‘they must be out of their minds’.

‘We had a referendum. It was a long and toxifying campaign. It divided the country. It caused an undue focus on the question of EU membership, normally far from the top of the list of the public’s concerns,’ he wrote.

‘The public would be utterly infuriated – and rightly – if we now put them through years of that misery and expense again.

‘They would know immediately that they were being asked to vote again simply because they had failed to give the ‘right’ answer last time.

‘They would suspect, with good grounds, that it was all a gigantic plot, engineered by politicians, to overturn their verdict.

‘A second referendum would provoke instant, deep and ineradicable feelings of betrayal.’

Former Cabinet minister Priti Patel said a second vote would be a ‘betrayal’, adding: ‘Those behind this have been against Brexit from day one. This is simply an attempt to overturn the will of the people.

Support for Tories RISES despite crisis

The Conservatives have opened up a four-point lead over Labour despite weeks of infighting over Brexit, a new poll shows.

A YouGov survey of more than 5,000 voters put the Conservatives on 40 per cent support, with Labour on 36 per cent, the Lib Dems on 10 per cent and UKIP at 4 per cent.

The research was conducted from December 12-14, in the immediate aftermath of last week’s attempted coup, which saw Theresa May survive a vote of no confidence from her own MPs.

Conventional political wisdom dictates that public support for political parties slumps when they are divided.

But the poll, commissioned by the People’s Vote campaign, suggested that Tory support rose by two points compared with a YouGov poll the previous week. Support for Labour fell by one per cent.

The findings will raise concerns among Labour MPs about Jeremy Corbyn’s failure to achieve a breakthrough.

He is holding out against forcing a vote of no confidence in Mrs May’s Government because of fears she would win.

‘The Cabinet need to stop looking for excuses and deliver on the referendum mandate.’

He added: ‘It would be a complete betrayal of what Theresa May said about respecting the 2016 People’s Referendum, and moreover a betrayal of democracy, of the 17million-plus who voted to leave.’

One Cabinet minister revealed he had sought and received a direct pledge from Mrs May yesterday that she would never sanction a second referendum.

Another said: ‘The idea of a second referendum is the talk of fools. The PM is never going to sign up to another referendum, and it is disappointing that people close to her are considering the idea.’

Speaking on the BBC1’s Andrew Marr Show yesterday, the International Trade Secretary said: ‘Supposing the Remain side won it by 52 to 48, but it was on a lower turnout – entirely possible.

‘Let me tell you that if there is another referendum, which I don’t think there will be, people like me will be immediately demanding it’s best of three. Where does that end up?’ Mrs May savaged Mr Blair yesterday over his support for a ‘people’s vote’.

In a strongly-worded attack, the Prime Minister accused her predecessor of ‘undermining Britain’s national interest.

She said: ‘For Tony Blair to go to Brussels and seek to undermine our negotiations by advocating for a second referendum is an insult to the office he once held and the people he once served.

‘We cannot, as he would, abdicate responsibility for this decision. Parliament has a democratic duty to deliver what the British people voted for. I remain determined to see that happen.’

Mr Blair hit back last night, accusing the PM of being ‘irresponsible’ by trying to push her deal through Parliament.

He said it was ‘perfectly clear neither the British people nor their Parliament will unite behind the Prime Minister’s deal’ and that was why she was forced to pull the vote last week.

‘In these circumstances it is not irresponsible or insulting to put forward an alternative way to achieve resolution,’ he added.

Mr Barwell tweeted yesterday that he was ‘off to play football, followed by a few hours work (this will not include planning for a second referendum)’.

Later, he said he was ‘happy to confirm I do not want a second referendum’, adding: ‘It would further divide this country when we should be trying to bring people back together.’

Mr Lidington is thought to have met pro-Remain Labour MPs last Thursday to gauge the support for a second poll. One MP at the meeting said: ‘He was sounding us out rather than encouraging us. I didn’t detect his view – it was more of a fact-finding mission.’

The plot that could leave us facing TWO more votes

Holding a second Brexit referendum would enrage millions of Leave voters who were told their decision would be final.

But as well as being divisive, the practicalities of another poll are far from straightforward – whatever Tony Blair and the ‘People’s Vote’ campaign claim.

A referendum would require a new law which would have to be proposed by the Government and agreed by Parliament. The rows over the questions would be endless.

Many Leave MPs would argue that voters have already answered the question ‘Leave or Remain’, and so the options on any second referendum ballot paper should be either Theresa May’s deal or ‘no deal’.

But Parliament, which has a Remain majority, would be expected to insist on an option to stay in the EU.

So there could be two questions – Leave or Remain followed by ‘deal or no deal’. Another option would be to have a three-way choice.

Alternatively there could be two votes several days apart, the first on whether or not to stay in the EU, with a second held if Leave wins on how to carry out Brexit.

Or voters could be asked to pick their preferences in order of one two and three.

'Frosty the Snowman': When Is the Classic Movie on This Year?
WORLD NEWS