Theresa May defends ‘moderate, open-hearted’ Tories in robust letter to three defectors that insists they are WRONG to oppose Brexit and compare the Conservatives to ‘warped’ Labour 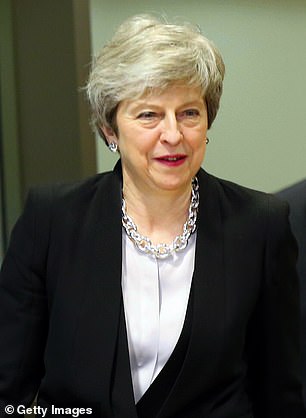 Theresa May (pictured in Brussels last night) defended her ‘moderate, open-hearted’ party tonight in a robust letter to the three MPs who defected to the Independent Group

Theresa May defended her ‘moderate, open-hearted’ party tonight in a robust letter to the three MPs who defected to the Independent Group.

The Prime Minister thanked Anna Soubry, Sarah Wollaston and Heidi Allen for their service to the party and the Government.

But she said they were wrong to suggest the party had been lost to a right-wing fringe obsessed with the European Union and Brexit.

Mrs May outlined a string policy achievements including money for the NHS, the race disparity audit and help for first time buyers.

And she defended the mission to deliver on the 2016 referendum – insisting it was ‘right to do so’ and it would be a ‘mistake’ to cancel the vote.

In her strongest response Mrs May said she was ‘sorry to read and do not accept’ comparisons to the ‘warped’ Labour Party under Jeremy Corbyn.

In a move designed to cause the maximum damage, the trio made their leap less than an hour before Mrs May faced MPs in the bruising weekly session of PMQs yesterday – and on the same day she has to convince Brussels she can pass a Brexit deal.

Vowing to stand in the ‘centre ground’ in a damning letter to Mrs May yesterday the group said they could not remain in the Tories while it was ‘in the grip of the ERG and DUP’.

They said Brexit has ‘redefined the Conservative Party – undoing all efforts to modernise it’ – and warning that the ‘country deserves better’ from its politics. 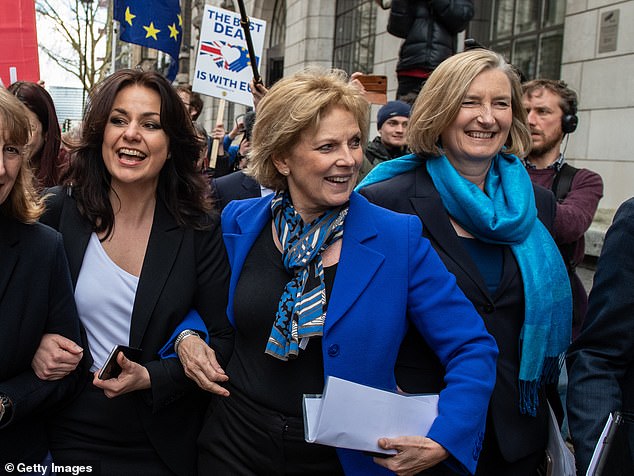 The Prime Minister thanked Anna Soubry, Sarah Wollaston and Heidi Allen for their service to the party and the Government 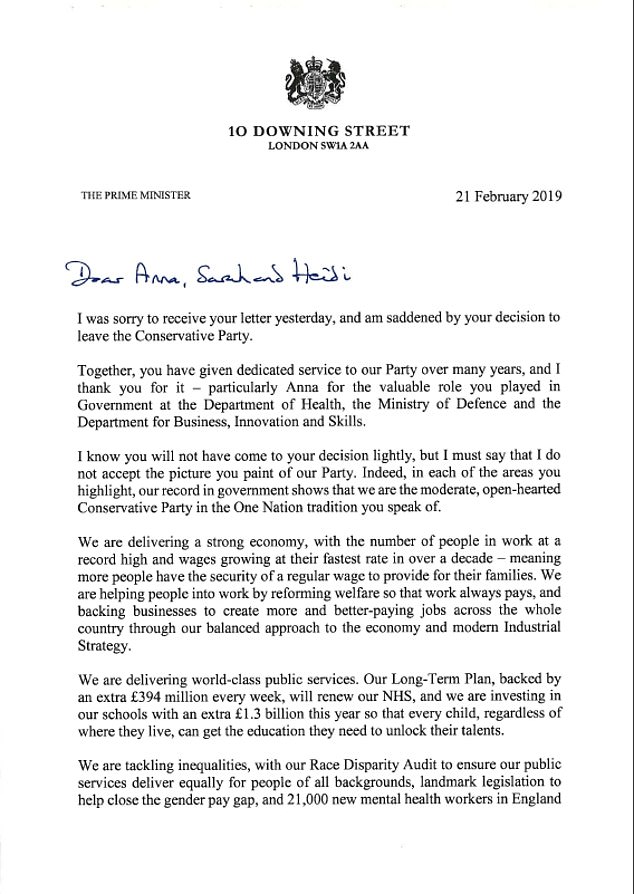 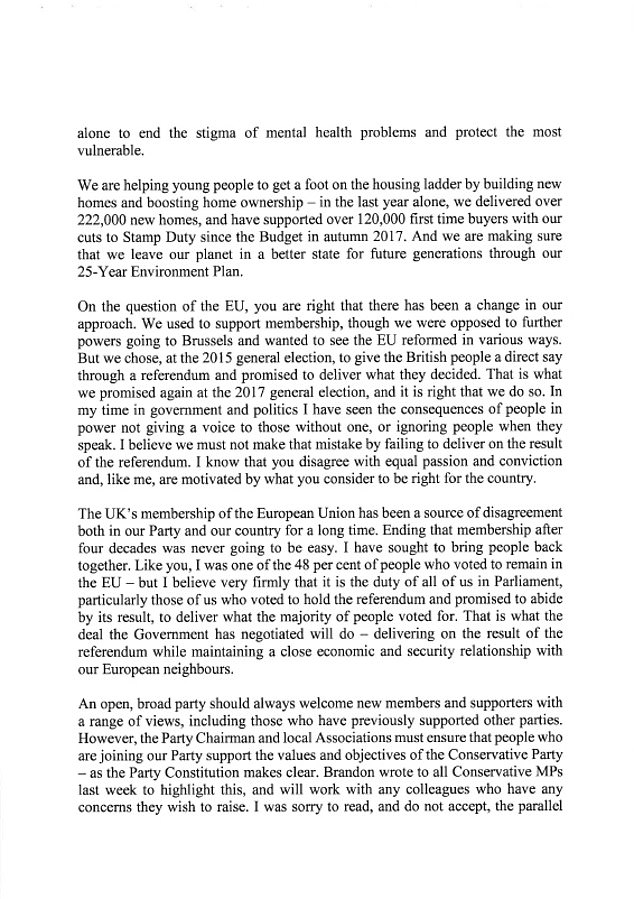 In her letter to the defectors, Mrs May said they were wrong to suggest the party had been lost to a right-wing fringe obsessed with the European Union and Brexit

What is the Independent Group and can you vote for it?

What happened this week?

Seven MPs resigned from the Labour Party on Monday and set up something called the Independent Group. They were joined by an eigth Labour MP last night.

Three Tory MPs also left their party – warning the Conservatives have been gripped by a right wing, pro Brexit insurgency.

Who is in the group?

Is it a political party?

No. It is a small business – technically a limited company – called Gemini A Ltd that was set up Gavin Shuker, one of the MPs, in January.

Can I vote for it?

No. Unless and until it registers with the Electoral Commission, it cannot stand candidates.

Can I donate to it?

Yes. The group is accepting donations through its website theindependent.group. It says donations will support the newly independent MPs.

What does it want?

All the MPs are Remain supporters and most of them have promoted a second referendum to cancel Brexit. They say they want evidence-based policy making to tackle the challenges facing Britain – without being inside the current political parties.

In an immediate response, Mrs May said she was ‘saddened’ by the decision and thanked the MPs for their ‘dedicated service to our party over many years’.

The PM vowed the Tories would ‘always offer the decent, moderate and patriotic politics’ Britain deserved.

he said delivering Brexit was ‘never going to be easy’ but insisted she was ‘doing the right thing for our country’.

The move puts rocket boosters under the new political movement that was launched by a ‘gang of seven’ ex-Labour MPs on Monday.

It is the biggest split in British politics since 1981 and could set in motion a total realignment of the party system.

Mrs May met pro-EU Tories in No 10 today as she battled to avoid more MPs defecting to the new Independent Group.

Both Philip Lee and Justine Greening complained Mrs May has focused her efforts on winning over hardline Brexiteers instead of seeking help from moderate MPs.

They along with Dominic Grieve are the focus of speculation about new defections.

The PM is braced for more MPs to leave the party and has also been warned ministers could quit the Government next week over no deal.

Even Philip Hammond refused to rule out quitting as Chancellor today as Mrs May battles to hold together the Tory coalition in the Brexit endgame.

The Tory leadership has strained to respond calmly to yesterday’s defection of three MPs to the new Independent Group – and Mr Hammond even suggested they could return to the Tory fold in future.

But Brexiteer frustration boiled over this afternoon as Nadine Dorries branded the trio ‘con merchants’ with ‘incredibly inflated opinions of their own ability’. 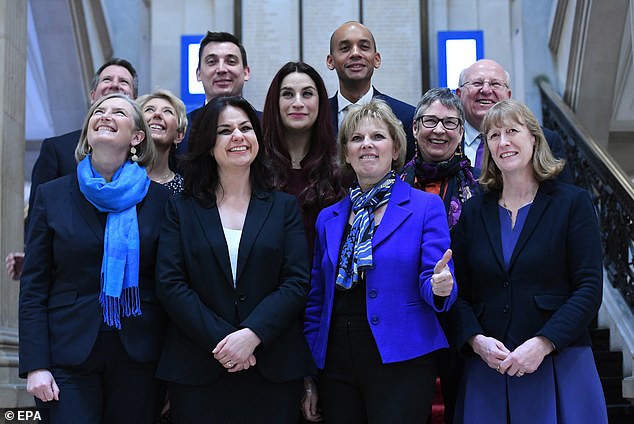 As Tory defectors to the new Independent Group claimed there were a ‘significant’ number of MPs in other parties on the brink of quitting, Westminster is abuzz with who could be next 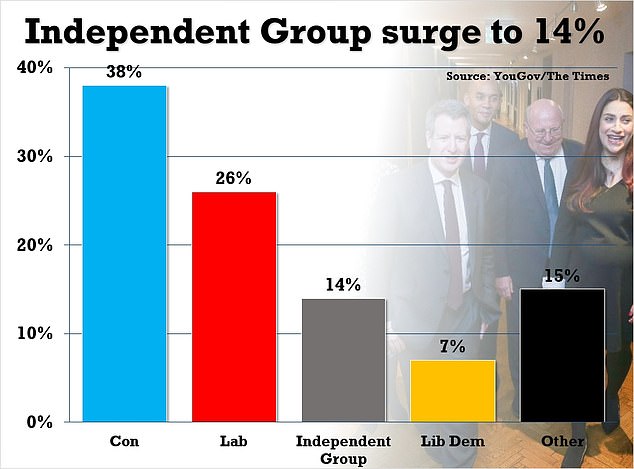 Ex-Tory MP Sarah Wollaston suggested today the Conservative party was ‘destroying itself’ amid speculation former colleagues could follow her to the new Independent Group.

‘I know that there are many colleagues on my side who will be watching carefully and expecting Theresa May to be certain that she is not going to take us out on a no-deal Brexit,’ she told Today.

‘Certainly I think that a third of the Cabinet, I’m pretty clear, would walk if they were looking at a no-deal Brexit.’