Margaret Thatcher’s most treasured jewels, the whisky decanter that kept her going and her favourite Daily Mail cartoon are all up for auction… But what will YOU bid when Mrs T goes under the hammer?

As a pioneer of power-dressing, Margaret Thatcher will be associated by millions with the blue Aquascutum suit she proudly wore for her bravura farewell speech in the Commons on the day she resigned as Prime Minister in November 1990.

However, the image that the true-blue Tory most wanted people to associate with her was in bright red — a colour linked with Labour. 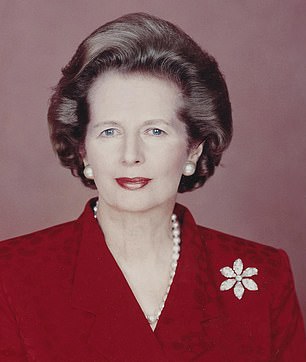 A detail from a framed 17in by 14in picture by the Japanese photographer Eiichiro Sakata, taken in Tokyo. The print, with its misspelt dedication, is signed and dated in pencil: ‘For Mrs Tatcher ‘Sakata’ Nov 21, 91′. This is expected to fetch £1,000-£1,500

Cynthia Crawford, her personal assistant for 35 years, said the image of her in a deep-red outfit — pictured here — was, in Mrs Thatcher’s words: ‘How I would like to be remembered.’

The ex-PM wore it on a visit to Japan in 1991 and the picture was taken by photographer Eiichiro Sakata, who signed it with a dedication to ‘Mrs Tatcher’. Despite the misspelling of her name, she subsequently hung it in her office in London’s Belgravia.

The photo is among 170 personal items once owned by Lady T being auctioned next month to mark the 40th anniversary of her election as Prime Minister for the first time. Two previous sales of her memorabilia made £4.5 million.

As with most topics, Britain’s first woman PM had strong views on fashion. They were formed at the knee of her seamstress mother Beatrice, who made her clothes as child in Grantham.

Among the outfits being auctioned are a blue dinner suit embroidered with scattered sequins worn at a No. 10 dinner for the 2002 Golden Jubilee.

There’s also a gold ensemble by the same British designer, Camilla Milton, worn to the unveiling of her statue in the Commons in 2007. 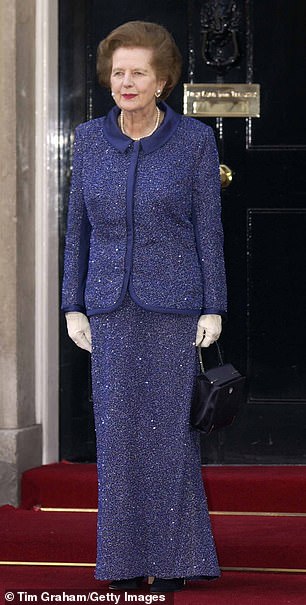 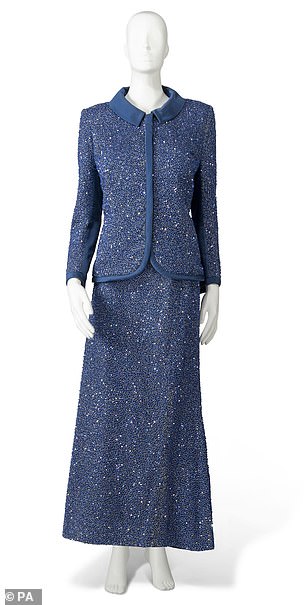 The first of two dinner suits in a single lot by the designer Camilla Milton and made in the early 2000s. This midnight-blue design with scattered sequins also has a short as well as a full-length skirt. Lady Thatcher wore the outfit when she re-visited No. 10 (left) for the 2002 Golden Jubilee dinner attended by all the surviving prime ministers of the Queen’s reign. This is expected to fetch £1,000- £1,500

The black velvet evening dress worn at a state banquet in the U.S. with Ronald and Nancy Reagan in 1981 is also for sale.

Two of the most personal items are an amethyst ring and pebble bracelet — gifts from husband Denis in the late Sixties. The ring was chosen by her twin children, Carol and Mark. It was on her wrist when she walked into No. 10 for the first time as PM on May 4, 1979 — and when she left in tears 11 and a half years later.

‘Lady T was inseparable from that jewellery,’ said a long-standing friend. ‘They were part of her. They were her most treasured possessions.’ 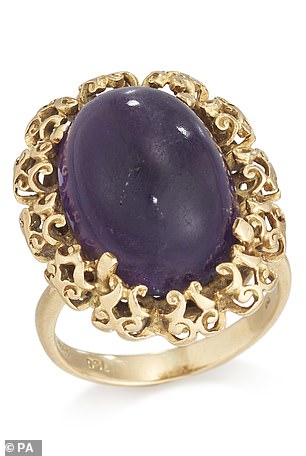 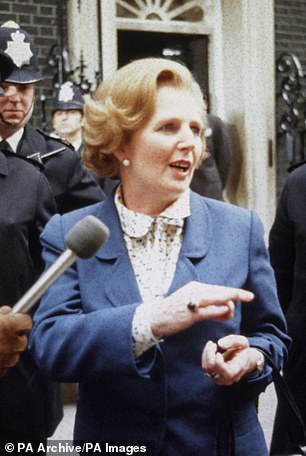 An 18-carat gold and amethyst ring with a London import mark dated 1968. One of the most personal items in the auction collection, this was a gift from Denis Thatcher, chosen by their twins, Carol and Mark. The ring was on Mrs Thatcher’s finger when she first entered No. 10 in 1979 (right) — and when she left 11½ years later. This is expected to fetch £1,200- £1,800 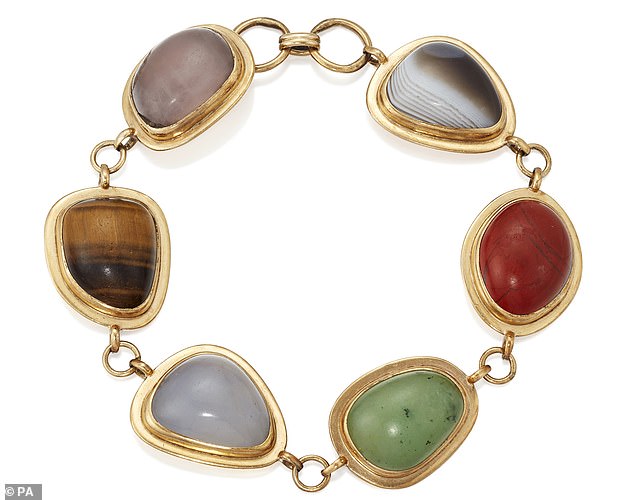 Reserve price is £1,800 for the ring and £2,500 for the bracelet — but auctioneer Christie’s expects them to go for much more.

Cynthia ‘Crawfie’ Crawford said her boss had a restrained taste in jewellery — ‘except on very formal occasions, such as President and Nancy Reagan’s farewell dinner in the White House’.

As for clothes, she recalled: ‘Mrs Thatcher told me that if you wear one full drop of colour in an outfit, it makes you look taller.’ 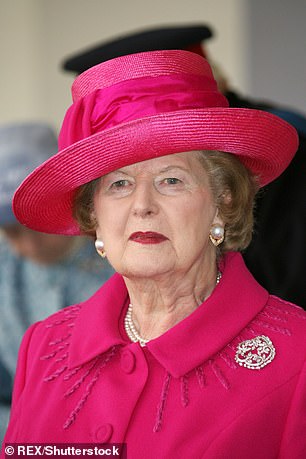 One of three formal hats in a single lot designed by Katharine Goodison for the parade to mark the 25th anniversary in 2007 of the end of the Falklands War. Lady Thatcher wore this one (above) during the military marchpast on Horse Guards Parade in London. The hat is expected to reach £400-£600

Other sale items include her desk blotter, estimated to fetch £1,200, and the same price for two signature handbags, four pairs of Italian Ferragamo shoes and three hats designed for the 25th anniversary of the Falklands War by Katharine Goodison.

There is also a Henry Moore etching of a woman’s head, reserve price £2,500, which hung above the fireplace in her Downing Street flat.

The Mail’s legendary cartoonist Mac is represented too, in one of three framed caricatures with a reserve price of £500 to £800.

One fascinating lot, entitled ‘Last day in power’, is a typed schedule for November 28, 1990 — Lady T’s final day as PM. It began with hair styling at 7.45am, her departure from Westminster and later her final audience with the Queen.

The proceeds will go to Carol Thatcher, 65, whose brother, Sir Mark, knew nothing about the sale. An unnamed charity will also benefit.

The auctions run from May 2-8; christies.com

The second of two dinner suits in a single lot by the designer Camilla Milton and made in the early 2000s. This is a cafe au lait satin design with a gilt spider web overlay, studded with pastes and composed of a dress and jacket. Lady Thatcher wore it (left) to the unveiling of a bronze statue of herself in the House of Commons in 2007. She was the first British prime minister to be honoured this way during her lifetime. This is expected to reach £1,000-£1,500

Not forgetting the handbag… 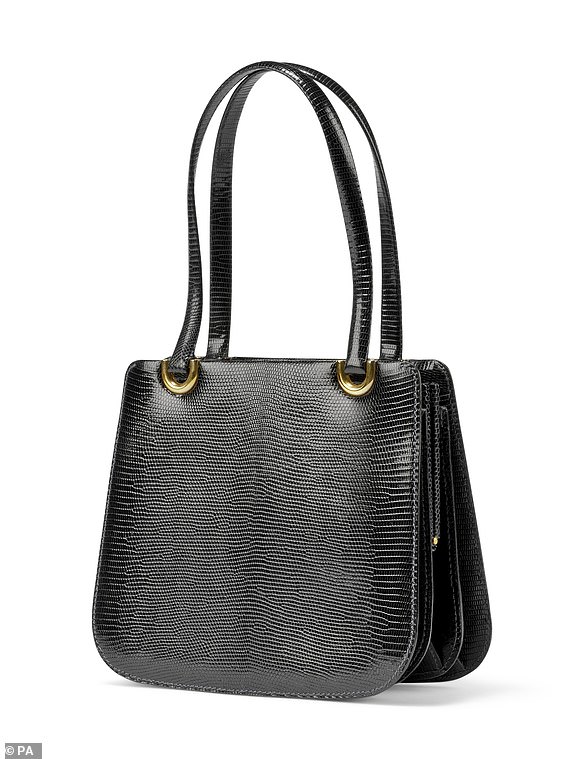 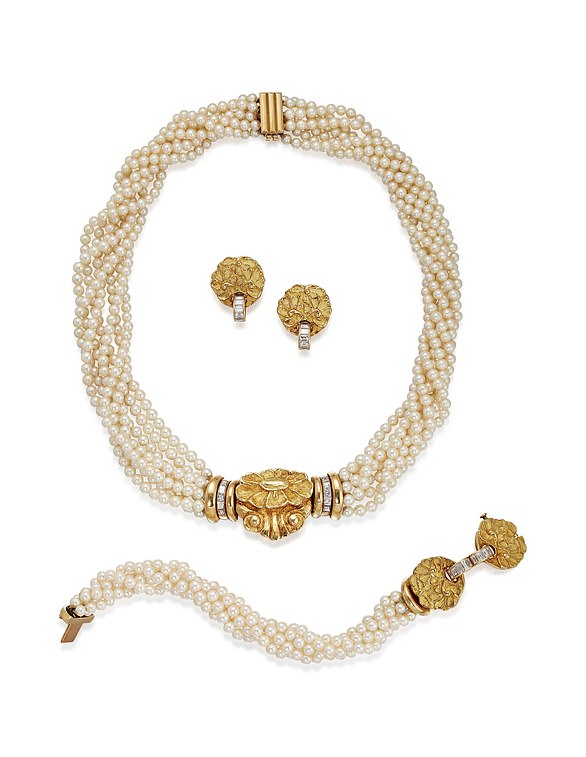 A cultured pearl and diamond necklace, bracelet and earring suite, signed Chaumet of Paris. This is expected to reach £6,000 to £9,000 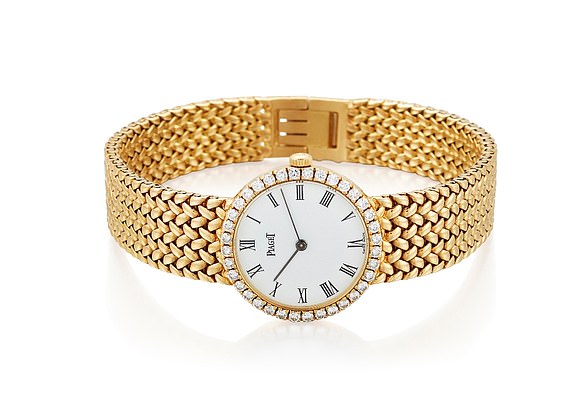 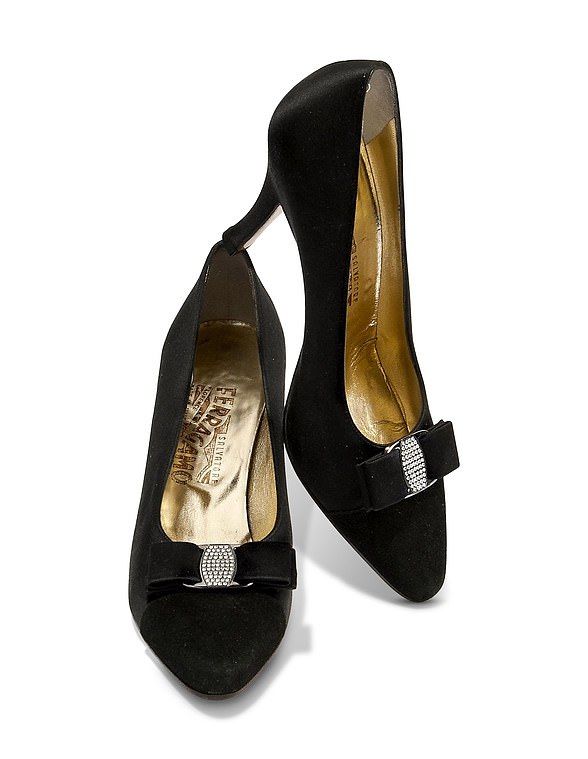 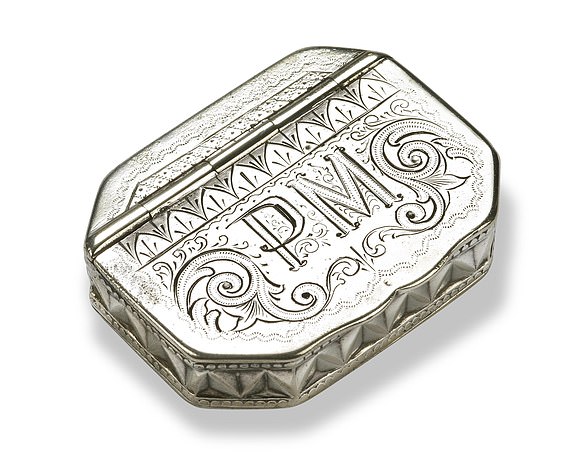 A Victorian silver-plated snuffbox with cut corners, cast with geometric motifs, the hinged cover engraved with initials ‘PM’. 2¼in wide. This expected to reach £200- £300