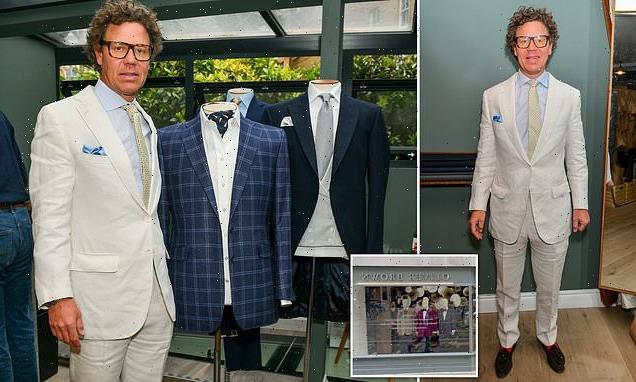 The millionaire owner of a luxury British menswear brand threatened to shoot one of his staff for drunkenly gatecrashing a private party and eating off a VIP’s plate, a tribunal heard.

Kristian Robson, 49,  proprietor of upmarket label Oliver Brown, had a furious bust up with Jerome Ingle-Smith, 41, from Surbiton in south west London, after he turned up uninvited at the swanky Mayfair bash.

Mr Robson feared the assistant manager was ‘wrecking’ the event which he had paid models and social media influencers to attend.

Mr Robson has run Oliver Brown for over 20 years with clients such as actor Damien Lewis, singer Sam Smith and ex-footballer Michael Owen. 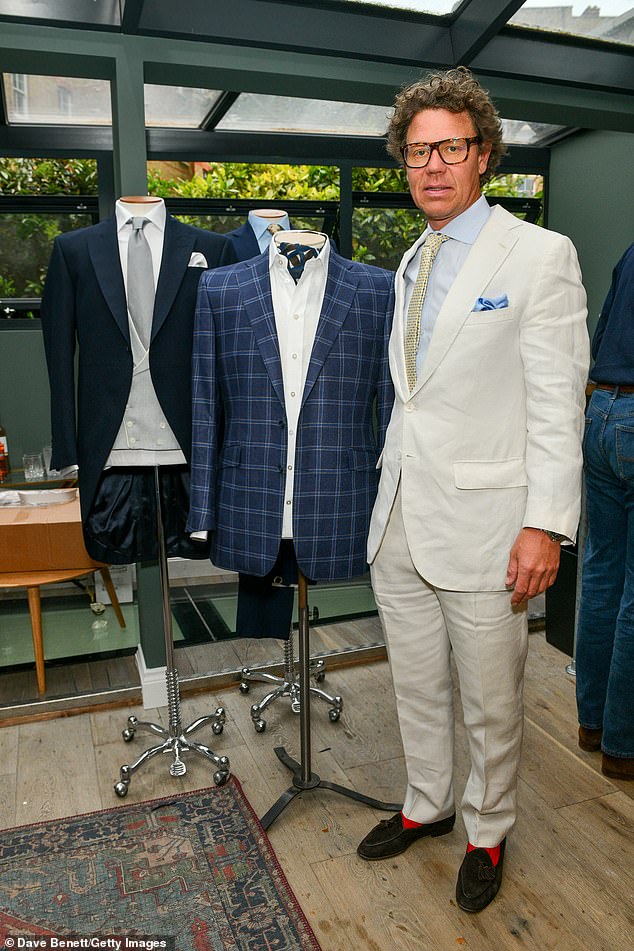 Kristian Robson, 49, proprietor of upmarket label Oliver Brown, had a furious bust up with an employee and threatened to shoot him 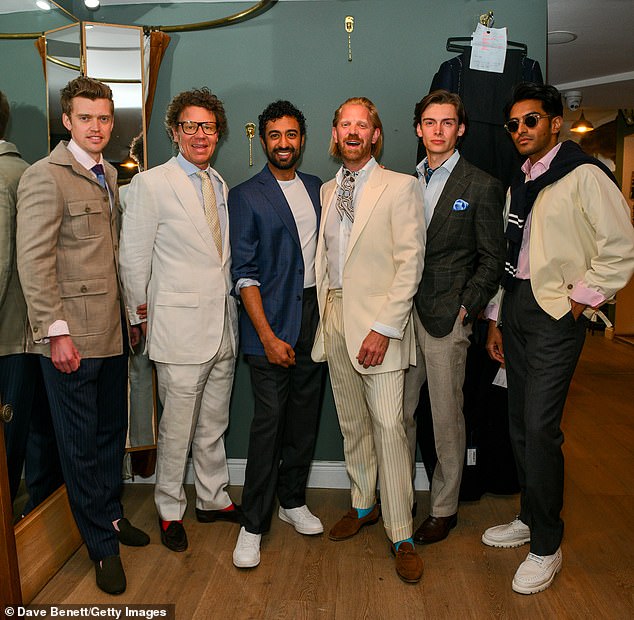 The firm was official licensee to Royal Ascot and the official supplier of formal wear for Team GB at the 2014 Winter Olympics.

The day before the bust-up last year, Prime Minister Boris Johnson was seen wearing an Oliver Brown suit at COP26.

Mr Robson was hit with complaints from neighbours in 2018 after submitting plans for a 39ft extension to his £3million London home.

When ‘defiant’ Mr Ingle-Smith refused to leave, Mr Robson threatened to kill him by saying: ‘I will beat the s*** out of you’ and ‘I will f***ing shoot you’, an employment tribunal heard.

The heated row took place at the Isabel Mayfair restaurant following the launch party of Oliver Brown’s new store in Mayfair’s Jermyn Street, which is renowned for gentlemen’s tailors.

After resigning over the threats the following morning, Mr Ingle-Smith has won compensation after he successfully sued Oliver Brown for constructive dismissal.

Mr Ingle-Smith will be awarded compensation at a later date. He is seeking £5,688 in damages.

However, the judge said that any award will have to be reduced by 75 per cent due to his behaviour on the night. 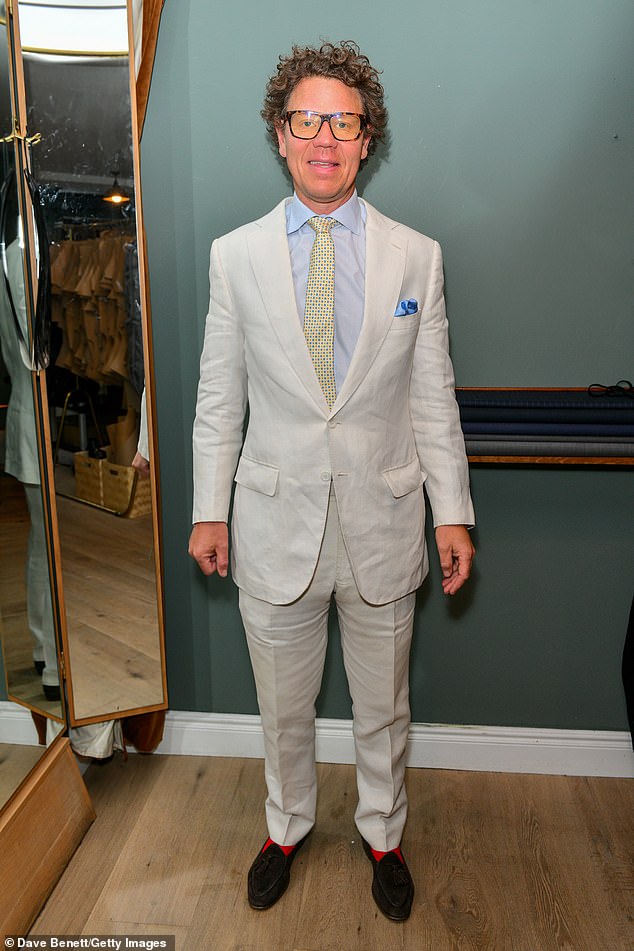 Mr Robson threatened to kill him by saying: ‘I will beat the s*** out of you’ and ‘I will f***ing shoot you’, an employment tribunal heard

Mr Ingle-Smith was not invited to the after party at the restaurant but turned up uninvited after getting drunk at the launch party on November 3 last year, the tribunal heard.

The hearing in central London heard that at the launch party the Jermyn Street store, guests drank glasses of negroni and prosecco.

The tribunal heard Mr Ingle-Smith appointed himself ‘chief barman’ at the launch party and when colleagues said Mr Robson didn’t want them drinking, he replied ‘f*** that, I am f***ing drinking’.

Witnesses said he ‘helped himself to drinks’ while serving others and was ‘drunk, loud and obnoxious’.

Mr Ingle-Smith – who claimed he only drank a quarter of a negroni, claimed Mr Robson was ‘visibly inebriated’ at the launch party.

At 8.45pm, the party finished, and Mr Robson and guests attended a private after-party at Isabel Mayfair.

Mr Ingle-Smith had not been invited to the later event but another guest asked him to come along, the tribunal heard.

However, his attendance led to a furious argument with his boss when he turned up and took the seat of a VIP and started eating from their plate.

Sitting at the other end of the table, Mr Robson ordered Mr Ingle-Smith to leave, however the assistant manager refused so his boss marched to his side of the table and removed his plate.

A row erupted as Mr Robson tried to get him to leave and eventually security were called.

‘Mr Robson was clearly angry and upset at this point and Mr Ingle-Smith was intransigent about leaving even after being asked a number of times’, a tribunal report said.

Mr Ingle-Smith resigned from his £32,000 a year job the next morning, saying: ‘Following last night’s threats of violence against me by Kristian, I no longer feel safe attending my place of work.

‘Considering Kristian’s threats to ‘shoot me’ and ‘beat the s*** out of me’ and being in the knowledge of his ownership of a licensed firearm, I am truly fearful of myself being physically present at work.’

Judge Joffe said: ‘It seemed to me that a significant source of Mr Ingle-Smith’s outrage was the fact that he felt disrespected and humiliated by the events which had occurred.

‘He felt that he had been invited to the event and was entitled to be there.

‘The removal of the plate and being told to leave in front of people he knew and the ‘VIPs’ would have been a significant affront to his amour propre.

such as the fact that the whole incident was humiliating to him.

‘He said that he saw himself as part of the Oliver Brown ‘family’ and many of the people at the dinner were known to him.

‘Mr Robson was sorely provoked but that is not the same thing as having reasonable and proper cause for issuing threats.

‘He had cause to firmly require Mr Ingle-Smith to leave and to involve restaurant security in his removal but a threat to kill self-evidently is not a reasonable and proper way to persuade a person to leave premises.

‘Mr Robson’s behaviour was poor, but as he explained to the Tribunal it was an important night for him and he felt Mr Ingle-Smith was wrecking it.’