This is the disturbing moment a man produces a knife after approaching two men in a van and unleashing a torrent of abuse.

Mobile phone footage shows a man in a black coat approach the vehicle’s window, believed to have been parked in Tower Hamlets, east London, and accuse the person in the driver’s seat of being on ‘wacky backy’.

The ‘resident’ outside the vehicle, who claims to live in Bow, then swears at the two men inside multiple times before pulling out a blade and jabbing it at the window. 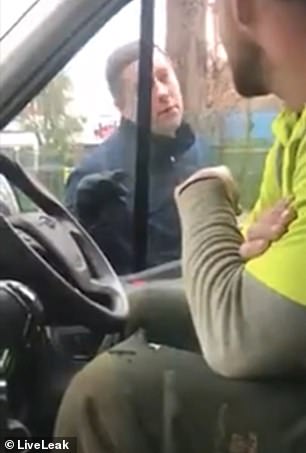 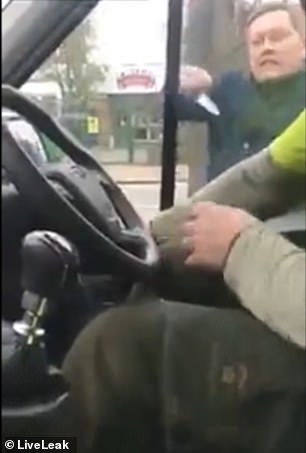 A knifeman claiming to live in Bow, Tower Hamlets, produced a blade after ranting at a van driver who was parked ‘minding his own business’ in the east London borough

Footage was uploaded to Liveleak and Twitter – with one user claiming the incident took place on Old Bethnal Green Road.

The clip begins with the two men inside the van stating they had just been ‘sitting here, minding our own business’, claiming the man they’re filming had told them he was a police officer.

The man in the black coat approaches the van and asks: ‘Still here?’

‘Yeah,’ the man in the driver seat says.

‘You on drugs mate?’ the man outside asks, continually accusing the driver, who appears to be completely sober, of being on illicit substances.

The man outside, who said he is a ‘resident’ of the area, continues: ‘You’ve been on the old wacky backy, ain’t you… or cocaine, ain’t you?’

The ‘resident’ continues to ask what the man behind the steering wheel is doing in the area, and the van driver accuses him of claiming to be a policeman.

‘You said you was a copper,’ the driver says. 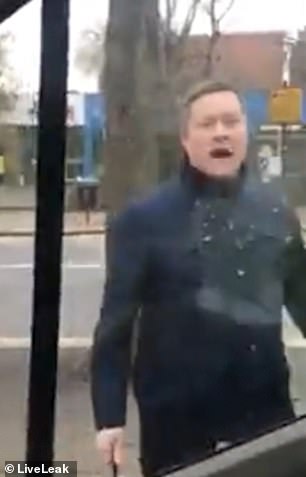 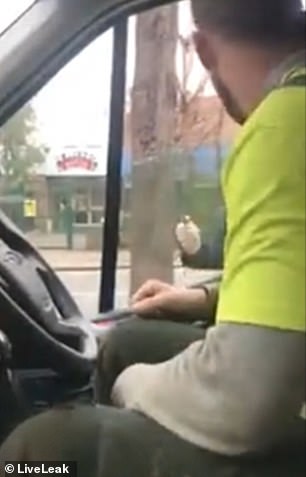 The men inside the van accused the ‘resident’ of claiming he was a policeman, but he denied this, before saying: ‘I believe I’m gonna f***ing hit you one’

He then begins an extemporaneous rant about how the man in the van was ‘just sitting here being an annoyance to people’ and ‘causing trouble’, referencing cases of lorry drivers parking in the area years ago, causing noise.

The man outside continues swearing at the driver before thumping his fist on the van’s window, pulling out the knife and jabbing it against the glass.

‘You want to f***ing put that away,’ the driver says before starting up the vehicle and driving off, as the ‘resident’ kicks the side of the van.

‘And Tower Hamlets is f***ing safe, is it?’ the cameraman says as the footage comes to an end.

Anyone with information should call police on 101 or tweet to @MetCC.