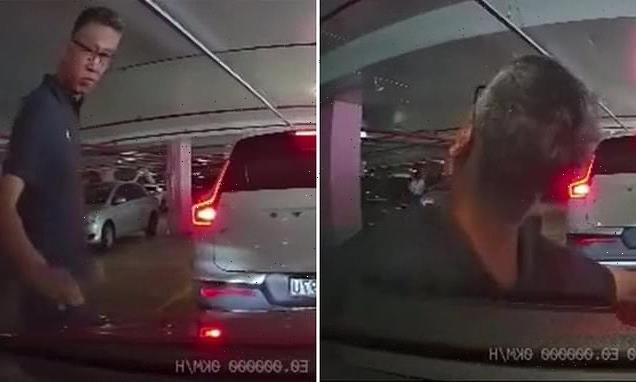 A crazy car video has gone viral after a man chose a very unusual way to show his anger at another driver on a typical Sunday afternoon in Sydney.

The footage was caught by the driver’s dashcam as he navigated the chaotic underground carpark in Macquarie Centre, in Sydney’s northwest, on Sunday after 4pm.

The video showed the driver casually waiting for another car to exit before things took a dramatic turn.

A man wearing a navy polo shirt and thick black glasses quickly appeared on the right of the screen, looking furious with the dashcam driver.

‘Bloke got mad because I didn’t let his wife through when he had to give way to me in Macquarie car park,’ the video poster wrote. 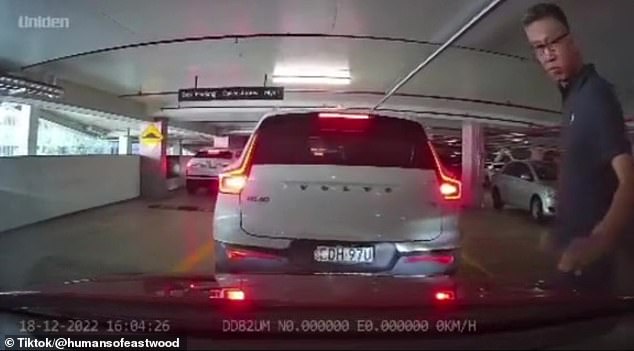 ‘So he decides to jump out the backseat and ragdoll on top of my car.’

That turned out to be a perfect description for what the man did – with the video showing the man flopping like a ragdoll onto the car bonnet as it moved very slowly towards the exit.

He then quickly got up – maybe satisfied that he had made his point – gave a glance into the car and walked back in the direction he had come from, presumably rejoining his wife.

The very strange video ended there, leaving hundreds of commenters very keen to find out more.

‘What did he want to achieve,’ asked one, speaking for many.

Another answered that, saying he ‘probably tried to claim for injury insurance’.

Others pointed out that such a claim was unlikely to succeed due to the video.

‘Lucky you got a dash cam, best insurance ever,’ a viewer wrote.

‘Oh, he wouldn’t even know this footage exists until we met again in a courtroom,’ the video poster replied. 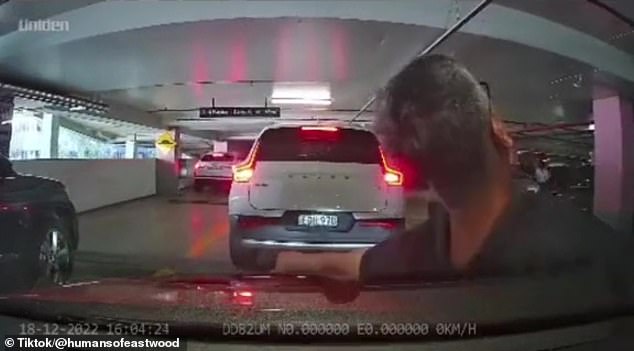 One watcher used it to make a reference to football players sometimes feigning injuries, asking ‘Does he play soccer?’

Some posters expressed concern for the health of the car bonnet flopper, or the car.

And some were concerned about both, such as the viewer wrote that ‘People like that never learn until they die. I hope your car is OK.’ 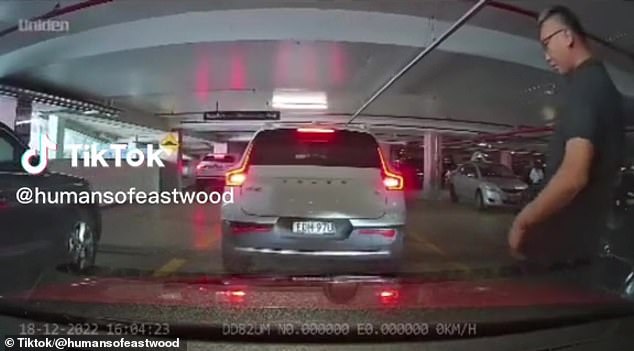 One watcher used what happened to make a reference to football players sometimes feigning injuries, asking ‘Does he play soccer?’

Others thought the short clip was not the end of what happened. ‘Hmmm … me thinks there is more to this story,’ said one.

One viewer used the opportunity provided by a captive audience to share a useful public service message.

‘Completely off topic, but always remember to put your handbrake on when parking on a slope,’ they said.