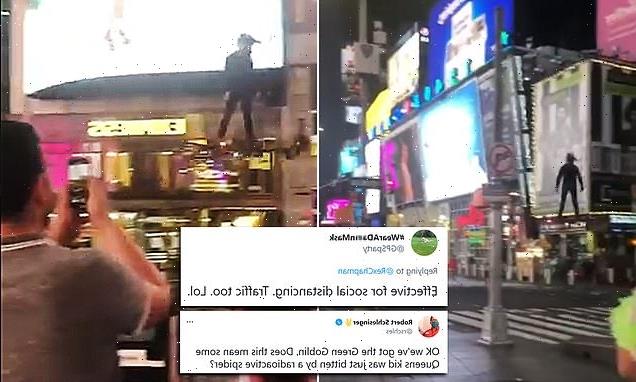 Big city flights! Incredible video shows man FLYING around New York’s Times Square on real-life hover board – as many compare him to a Spider-Man villain the Green Goblin

Incredible video shows a man flying around New York City’s Times Square on a hoverboard in the early hours of the morning – drawing comparisons to iconic Spider-Man villain, the Green Goblin.

Footage shot by stunned onlookers shows the man – later revealed to be YouTuber Hunter Kowald – flying a dozen feet off the floor in the drone-like craft which is powered by eight separate propellers.

The viral video – first posted by Morgan Nevins on her Instagram account, @molivefreeordie – was shot at around 5am on Saturday.

Passing New Yorkers can be seen recording the spectacle on their phones as the man shoots off down 7th Avenue.

The man’s identity was initially a mystery, but Kowald later posted a video to his own YouTube channel showing him hovering in Times Square.

Kowald is the creator of the SkySurfer Hoverboard Aircraft, and records videos of himself flying the madcap contraption.

A man was recorded flying through the air on some sort of hoverboard in Times Square early on Saturday morning this weekend, lighting up the New York City sky 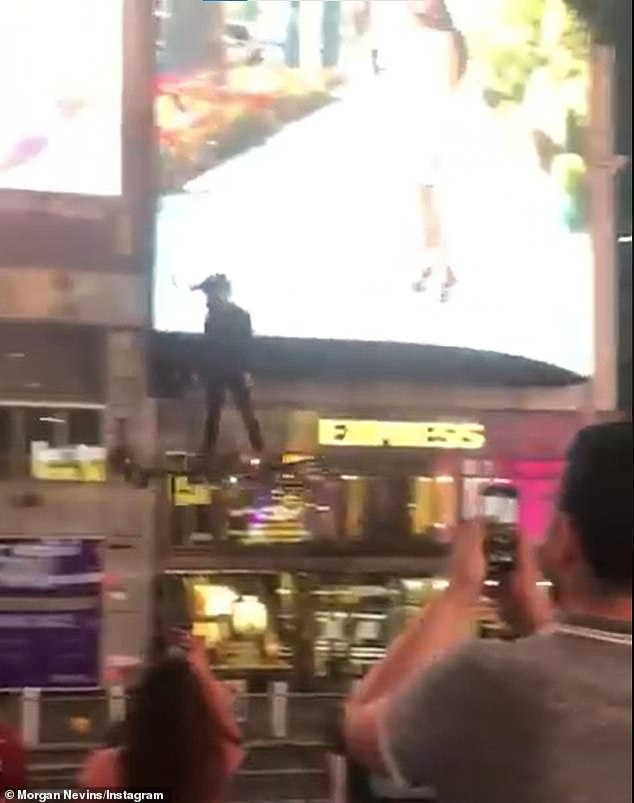 The man in the video is seen wearing a mask as he shoots down 7th Avenue, seemingly over a dozen feet off the ground 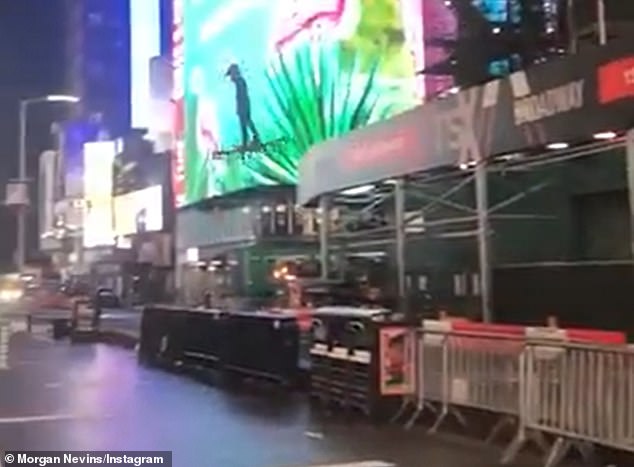 The vehicle the man is flying around on makes a loud buzzing noise, as it looks to be made from at least a couple of drones

DailyMail.com has reached out to Kowald for comment and information about the hoverboard.

Kowald spoke to Inside Edition on Tuesday about the viral video.

‘It’s a highly engineered device. I spent years on this thing to make this happen, at least to do it safely and properly. There’s a lot of safety built into that device, so essentially, I could have two motors fail and still land safely,’ Kowald stated.

He says that he ‘had permission and asked for it in advance, and everybody was around us to make sure we did it properly’ for the stunt.

But the NYPD doesn’t seem to completely agree, telling Inside Edition that they were looking into the video.

It’s illegal to fly any drone-like aircraft in Manhattan without permission, and if the hoverboard was classed as a helicopter or similar piloted aircraft, the rules are even stricter.

New York City administrative code, section 10-126 deals with ‘avigation’ – aerial navigation – in and over the city.

It says: ‘It shall be unlawful for any person avigating an aircraft to take off or land, except in an emergency, at any place within the limits of the city other than places of landing designated by the department of transportation or the port of New York authority. 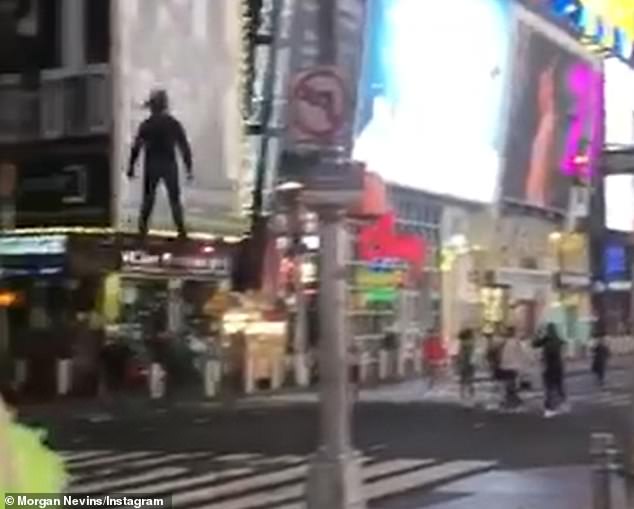 The drone-like craft is powered by eight separate propellers 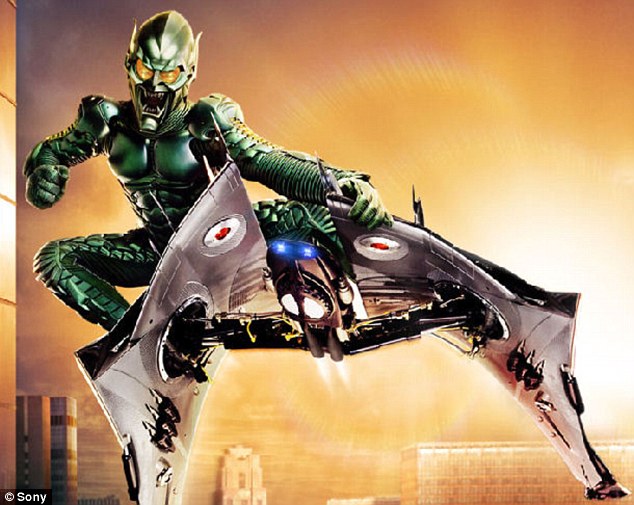 The video quickly drew comparisons to the Green Goblin, a hover-board riding villain from the Marvel universe who was played by Willem Dafoe in 2002’s Spider-Man movie

So far, Nevins’ video has racked up over 4 million views on Twitter and even more across social media.

She told  Newsweek she was leaving her first dance party since the pandemic and trying to figure out how to get home when she captured the footage.

‘We heard a crazy noise further down Times Square—sounded like a terrible drone and thought maybe it was someone taking pictures overhead with a drone but we saw this person flying on this hoverboard, [a] giant airborne drone,’ Nevins told Newsweek.

Nevins said the flyer was at the other end of the square before approaching her table.

‘A crowd formed quickly—even for Times Square at 5am,’ Nevins said. ‘Then the drone craft flew back towards us hovering over our heads at this little table and then landing right near us.’

‘When it landed near us I could feel the wind draft from the propellers, almost like a helicopter,’ Nevins continued. ‘My friends and I had a lot of questions about how this could even be legal or how it worked.’

Nevins added that the man flying the hoverboard appeared to be in strapped in with ‘ski or snowboard-type foot holds.’

‘It felt like out of a movie, but there was no filming crew, very surreal and never seen anything like that,’ Nevins stated.

Unsurprisingly, the video quickly drew comparisons to the Green Goblin, a villain played by Willem Dafoe in 2002’s Spider-Man movie.

In the movie, the Green Goblin taunts the people of New York City while flying around on stolen hoverboard, throwing pumpkin-shaped bombs while cackling in his green suit.

A new Spider-Man movie, No Way Home, is currently in post-production and there’s no known link between the film and the stunning scene captured in New York City.

Still, people on Twitter were abuzz with the man buzzing through the skies of one of the country’s most famous squares.

‘OK we’ve got the Green Goblin. Does this mean some Queen kid was just bitten by a radioactive spider?’ Robert Scheslinger asks.

‘The fact that he isn’t dressed as the green goblin was a whole missed opportunity,’ tweeted another user.

‘First footage of Willem Dafoe as green goblin in Spider Man No Way Home?! lol I wish!’ exclaimed yet another. 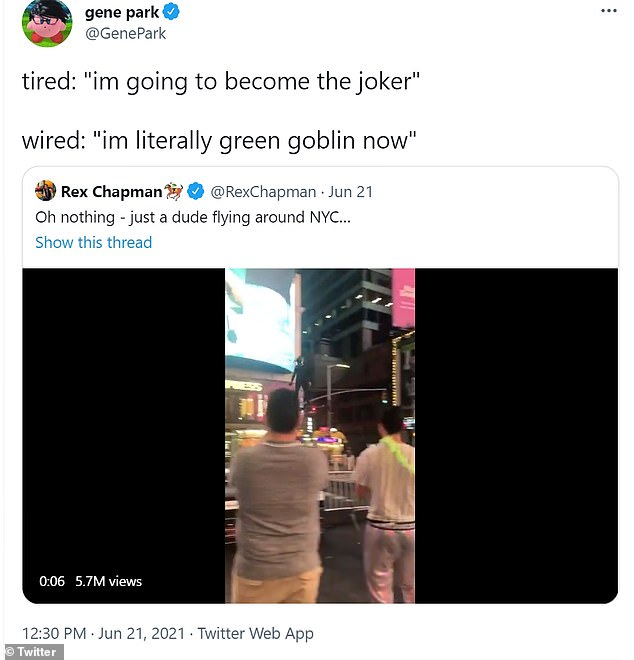 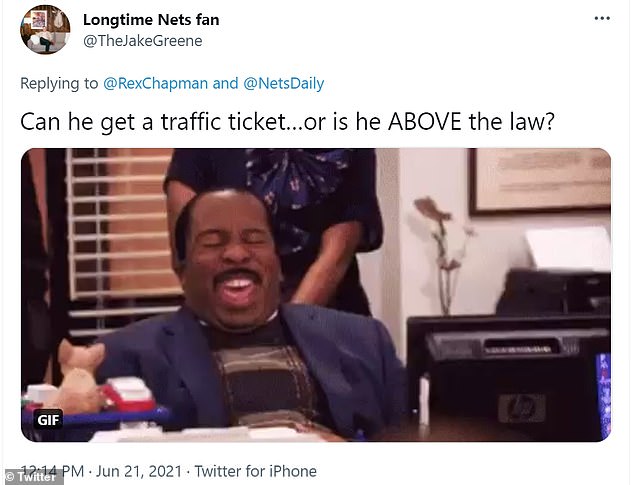 Others found plenty of humor in the man flying about Times Square.

‘It’s all fun and games until you see him looking in your 2nd story bedroom window in the middle of the night,’ Kraig Withakay said.

‘Oddly, that’s not the weirdest thing seen in times square,’ tweeted one user.

One person joked, ‘Can he get a traffic ticket…or is he ABOVE the law?’

Still, not everyone trusted where their eyes told them when it comes to the video. 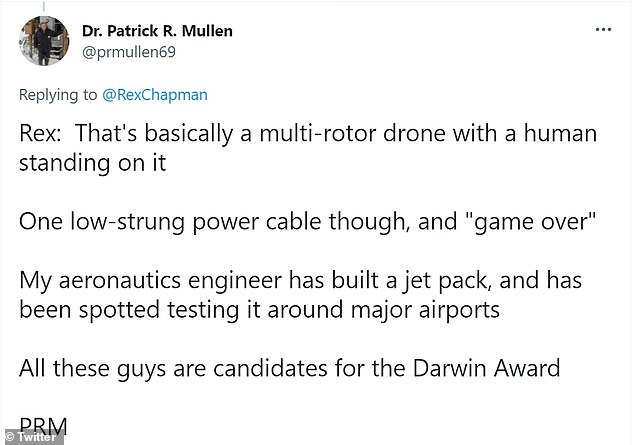 ‘I am a drone pilot and have seen this guys [sic] videos. I am still skeptical that it’s not a composited video edit,’ tweeted Ron Perron. ‘Simply I can’t believe how dumb this design is otherwise. And would he not be arrested? The creator is a digital artist.. I still think it may be fake.’

As it turns out, the man could be flying away from law enforcement if he’s identified, as New York City’s administrative code bans the ability for people to ‘pilot, steer, direct, fly or manage an aircraft in or through the air, whether controlled from the ground or otherwise.’