Motorist, 35, found alive and TALKING wedged inside the footwell of his mangled car after horror truck crash in Brazil

This is the unbelievable moment a judge is found alive wedged inside the footwell of his mangled car which has been crushed between two trucks into a mangled wreck.

The driver, Davi Cardoso, 35, is miraculously still conscious and talking in a video of the carnage, filmed after the smash in Belo Horizonte, Brazil, last Thursday.

It then took rescuers more than three hours to get him out of the car, by which time he had lost consciousness. 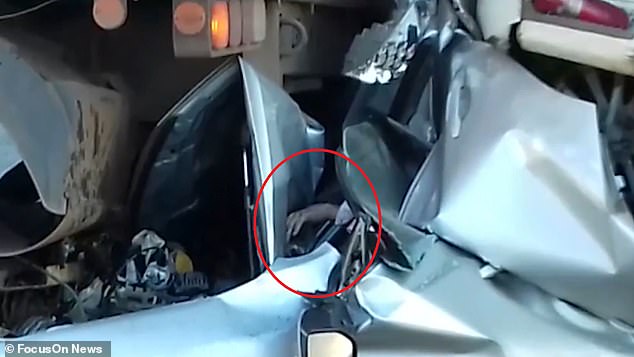 Judge Davi Cardoso, 35, has been miraculously found alive inside the footwell of his car after a crash in Belo Horizonte, Brazil

Mr Cardoso had been driving home from work on the BR040 motorway when the horrendous pile-up happened in heavy traffic during rush hour.

The footage shows other motorists beside the two trucks exclaiming in amazement as they discover Mr Cardoso alive and trapped in his car’s unrecognisable remains.

The white cab of the trailing truck is forced up against the red trailer of the one in front, with what is left of Mr Cardoso’s car jammed in between.

One man in a grey vest peers into the tiny space after pulling open a section of shattered glass on the Fiat Punto and the judge waves his hand.

Others then appear to shout for him to remain calm as the man cries ‘get me out!’ and traffic continues to flow past.

In a remarkable stroke of luck, it appears Mr Cardoso was thrown into the footwell of the car in the crash, the only space inside the mangled vehicle that remained intact.

Fortunately, petrol didn’t leak from the stricken vehicle, although steam hissing from the engine caused alarm.

Rescuers are then seen at the crash site and have been able to get the now-unconscious 35-year-old out of the wreck.

A bag of fluids connected to a drip has been hung up on the truck in front and is taken down when Mr Cardoso is lowered to the floor on a stretcher.

His brother Mateus is seen smiling and embracing his father beside the stretcher, amazed at Mr Cardoso’s remarkable escape. 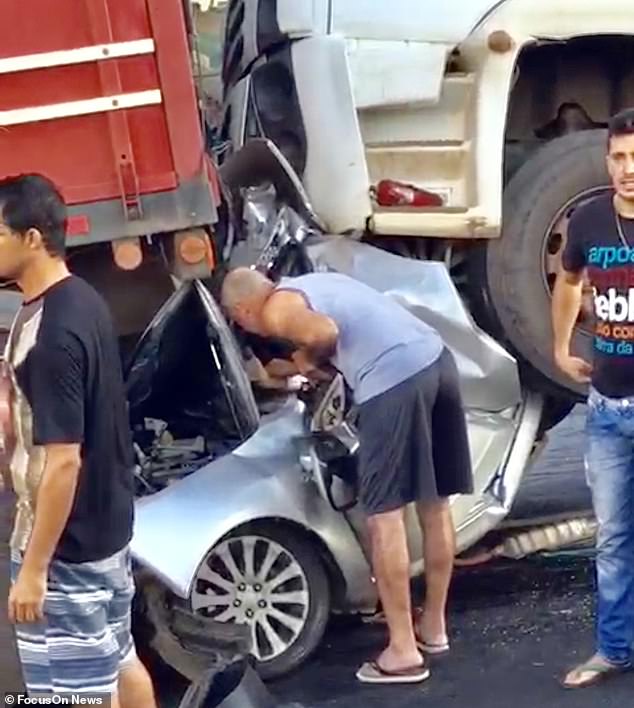 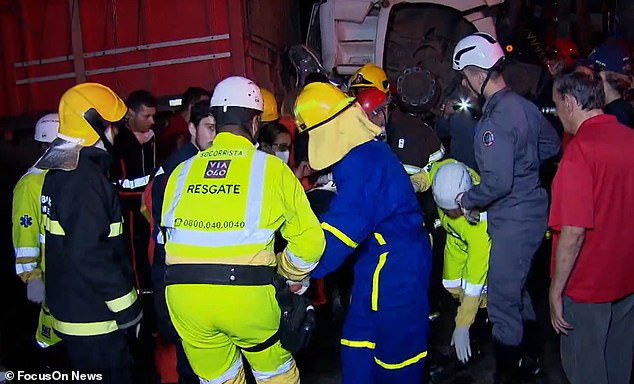 It took rescuers three hours to free him from the footwell, by which time he had lost consciousness 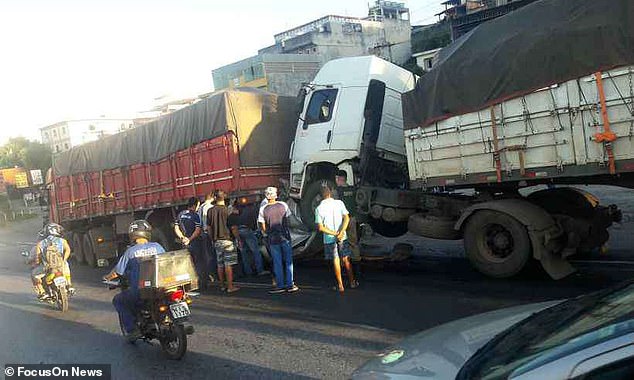 According to road traffic police, the accident was allegedly caused by the driver of another heavy goods vehicle who made a dangerous manoeuvre which precipitated the series of near tragic events

Celebrating the rescue, Mateus said they were ‘grateful for all the efforts made to save Davi and that it was nothing short of a miracle he had survived.’

According to road traffic police, the accident was allegedly caused by the driver of another heavy goods vehicle who made a dangerous manoeuvre which precipitated the series of near tragic events.

Military police officer, Sergeant Fabiano Silva said to Brazilian Record TV: ‘A truck in front of the red lorry apparently changed lanes without warning, forcing the driver of the red lorry to hit his brakes.

‘Davi was travelling right behind the truck and was forced to slam on his brakes too.

‘We believe the lorry behind Davi couldn’t stop in time and it ploughed into his car.

‘It literally rode over and came to rest on top of his vehicle with the heavy weight of the cab crushing and sandwiching it underneath the rear axle of the red truck in front.’

Sergeant Silva said: ‘Unfortunately we couldn’t remove him ourselves because we had to wait for the fire crew to make its way to the location, through the heavy traffic, with the right cutting and lifting equipment.’

A crane was used to lift the cab of the truck off the top of the car and an inflatable device kept the heavy goods vehicle propped up and cushioned underneath to stabilise and prevent it from toppling over onto officers while they worked to release the victim.

Fire service captain, Thiago Mirando, said: ‘It was a difficult and dangerous procedure prising the vehicles apart and keeping the victim’s health stable.’

Fortunately no one else was in the car with Mr Cardoso as it could have been ‘a major tragedy’ said captain Mirando.