In a 12-minute TV address he announced a new £90 increase in the minimum wage – pushing it up to £1,360 a month – following  a month of protests and blockades. 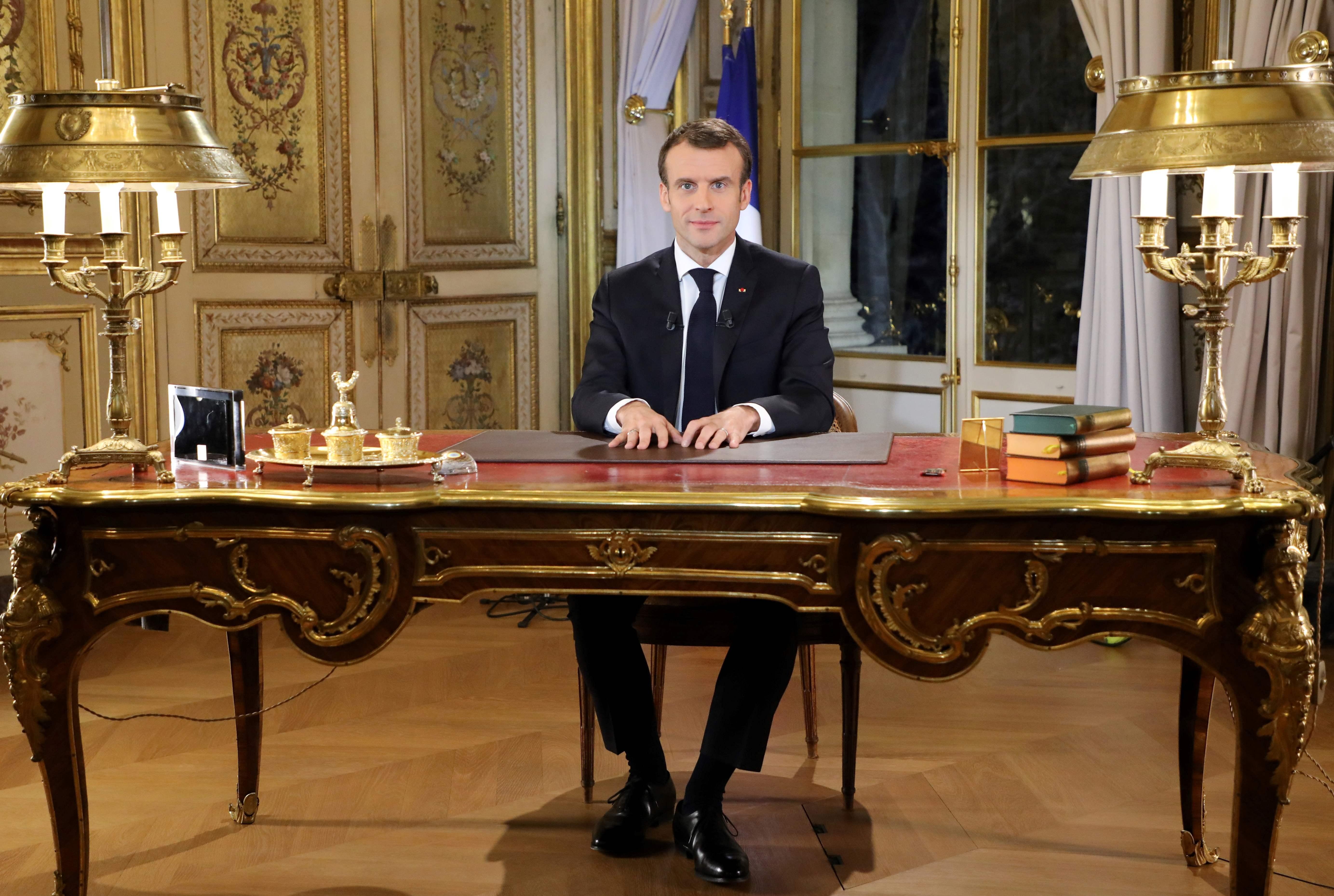 This will not "cost anything to the employer", pledged Mr Macron, and will be accompanied by all taxes and other charges on overtimes being scrapped.

There were also be an end-of-year bonus that employers can pay without being charged by the government and a planned tax hike on low-income pensioners earning less than £1800 (€2000) a month would also be scrapped.

Mr Macron also ruled out any return of the Solidarity Wealth Tax, saying that he wanted to stop rich entrepreneurs "moving abroad", so preventing "job creation".

The extraordinarily generous package of measures represents a humiliating U-turn by Mr Macron who originally said he would not yield to rioting as he tried to liberalise the sluggish France economy. 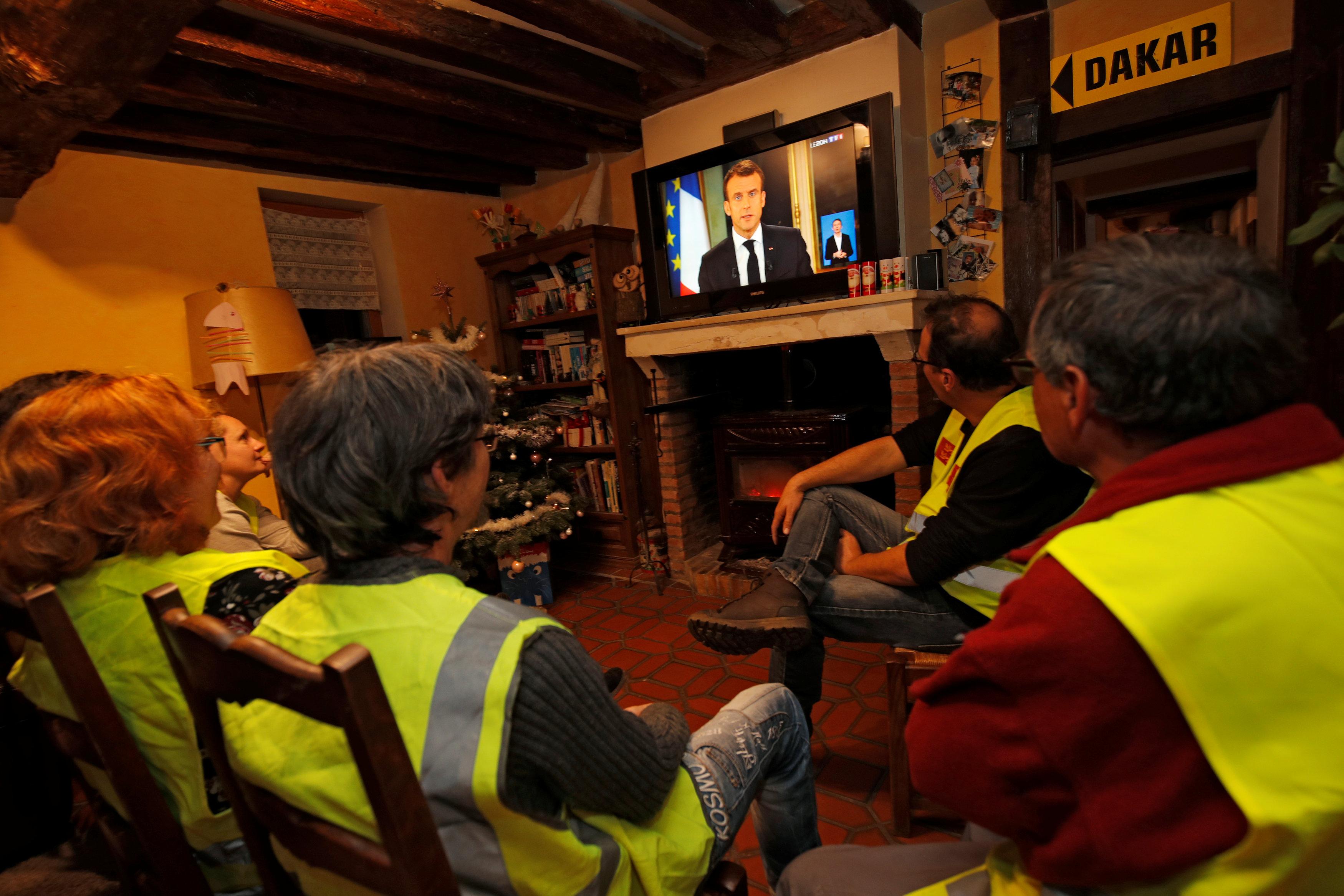 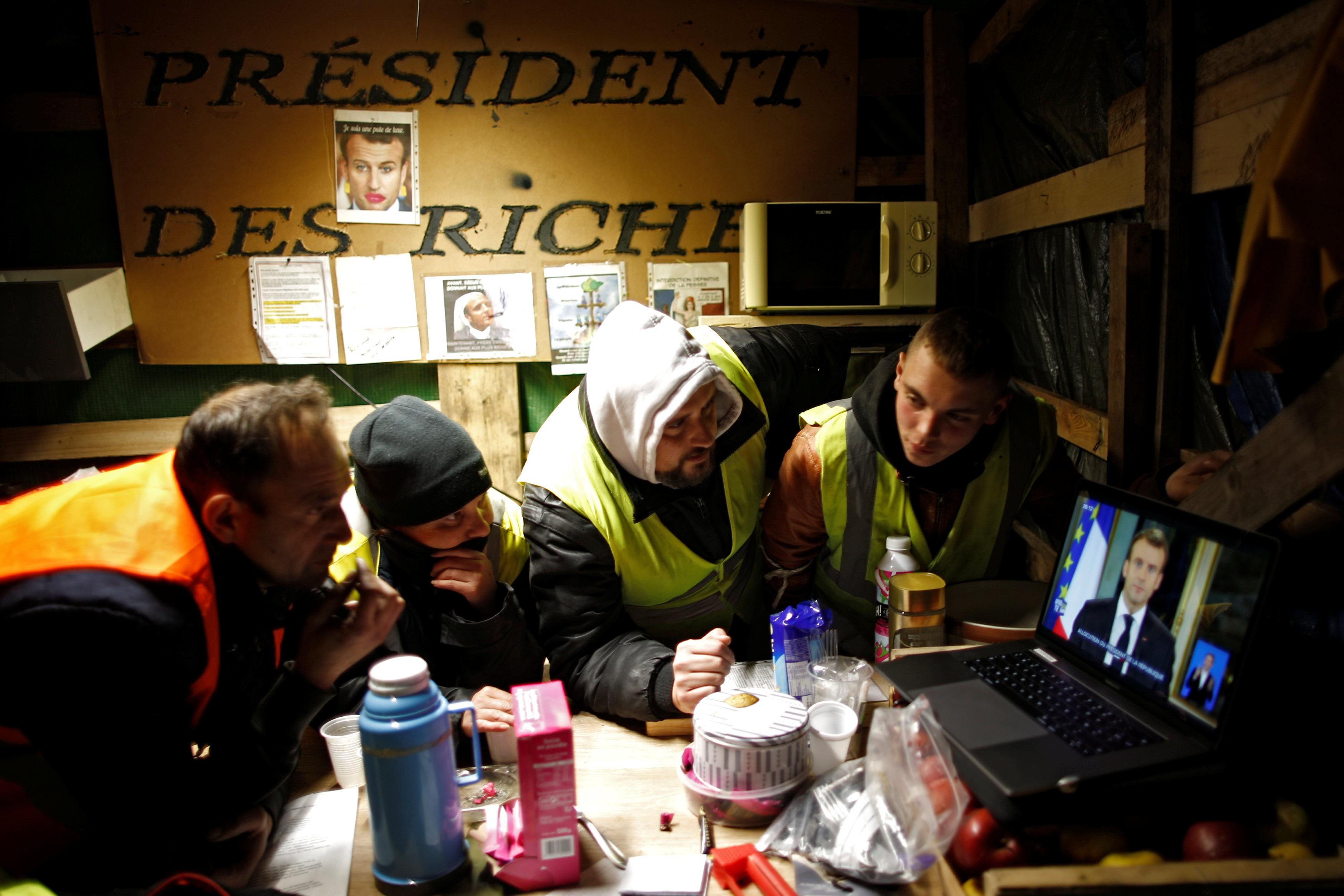 So-called Yellow Vest fuel protestors first took to the streets on November 17, and this led to the president scrapping green charges on petrol and diesel.

"I heard the anger was first of all against the tax, but it’s deeper than that, and this anger could be our chance," said Mr Macron.

"I heard the despair of the forgotten people. There are couples who struggle to make ends meet, brave single mothers or widows who can’t afford child care, and poor pensioners who often have to help children and grandchildren, as well as people with disabilities."

Mr Macron said this "Forgotten France" has existed for at least 40 years, and that everything had to be done to help them. 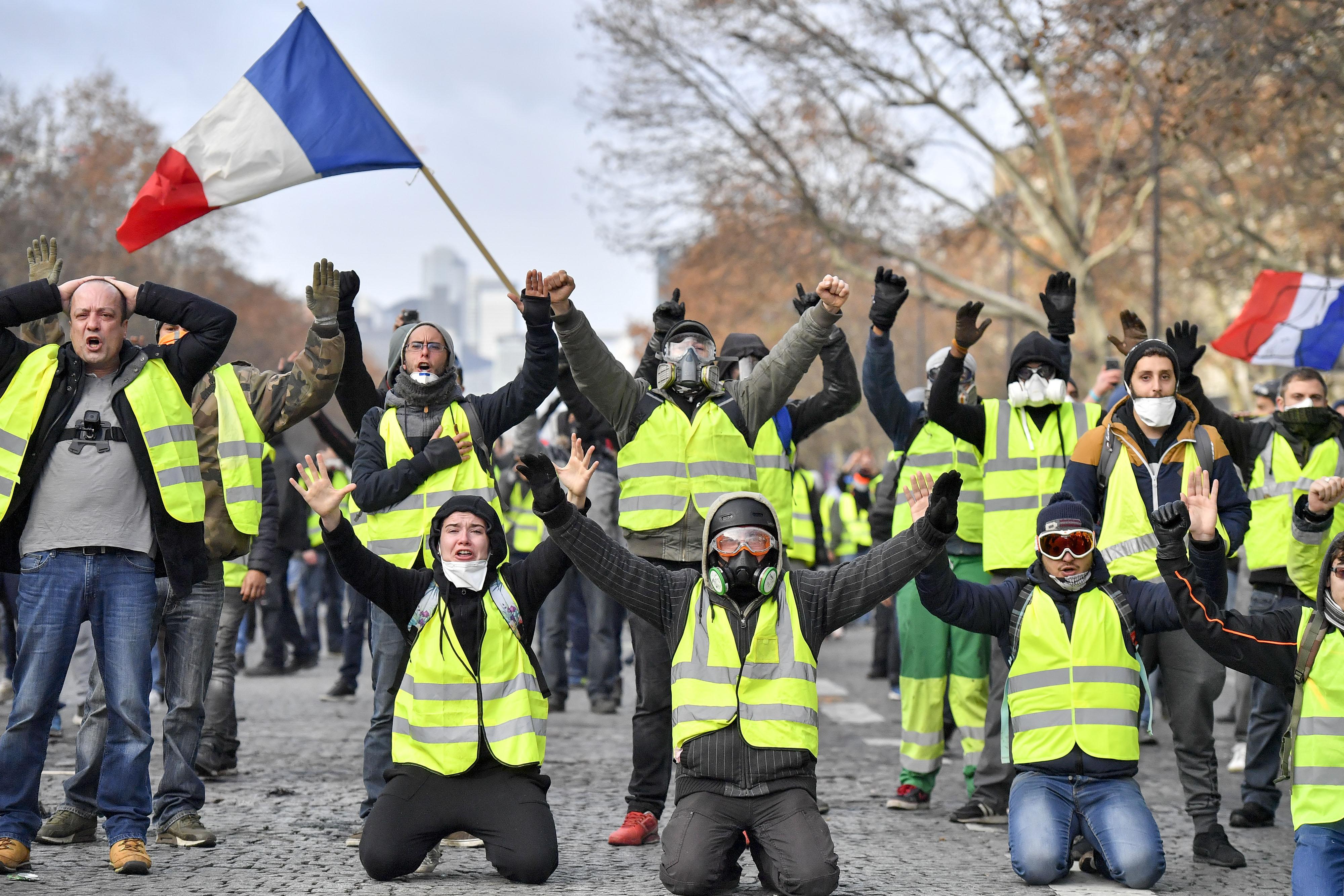 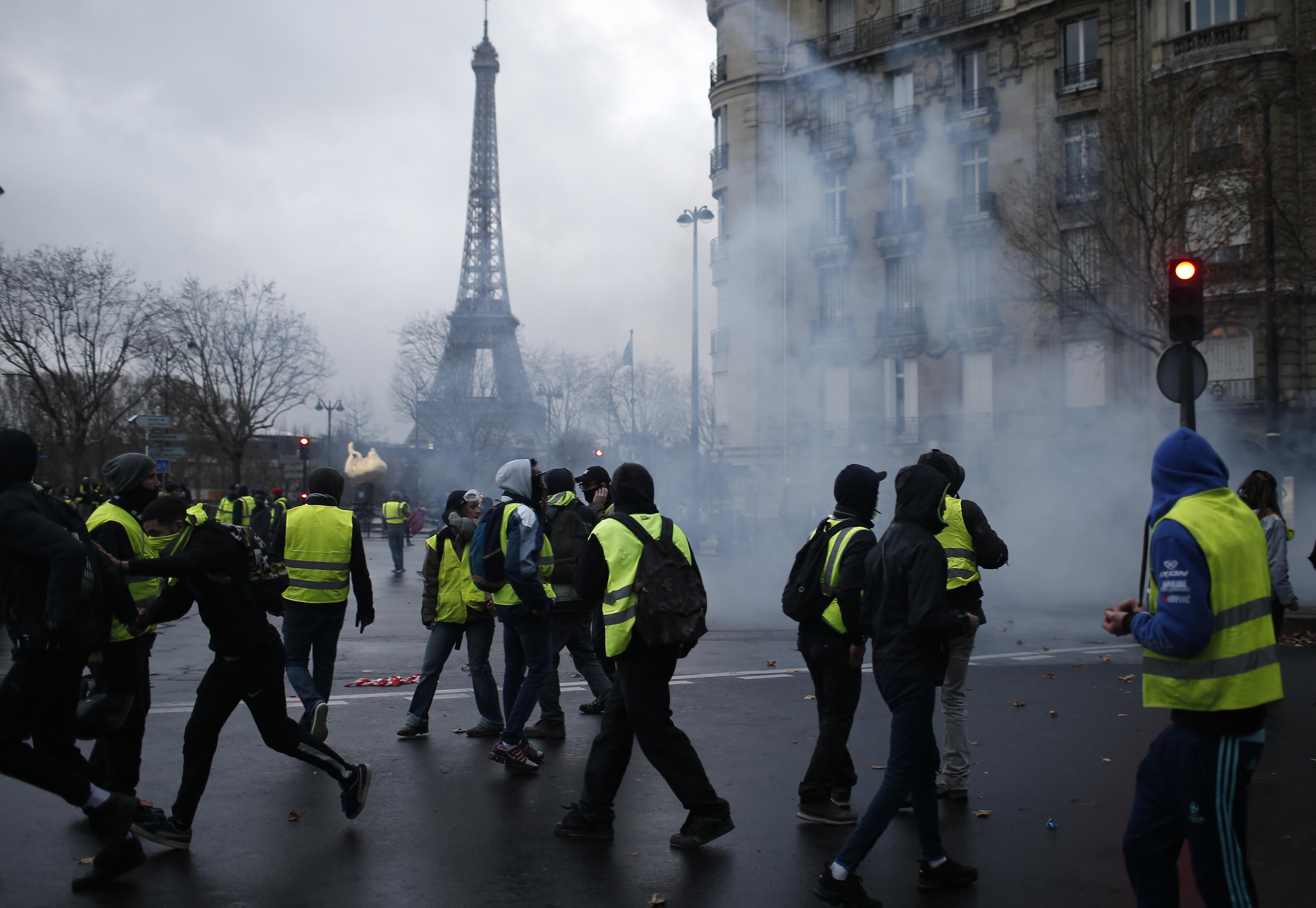 Referring to rioting which has seen 4,523 arrests across France since November 17, Mr Macron said: "I will not compromise on violence. When violence unfolds, freedom ends."

Mr Macron, who served in Francois Hollande's Socialist government before becoming President himself in 2017,  particularly accused opportunists including looters of "taking advantage of sincere anger."

He added: "No anger justifies attacking a policeman, degrading shop and public buildings. From now on it is the peace and the Republican order which must reign."

Cities including Paris and Bordeaux exploded into violence on Saturday, during the fourth weekend of demonstrations by the Yellow Vests, who are named after their high visibility jackets.

Mr Macron remained holed-up in the Elysee Palace as buildings were set on fire, shops were looted, and police were attacked. 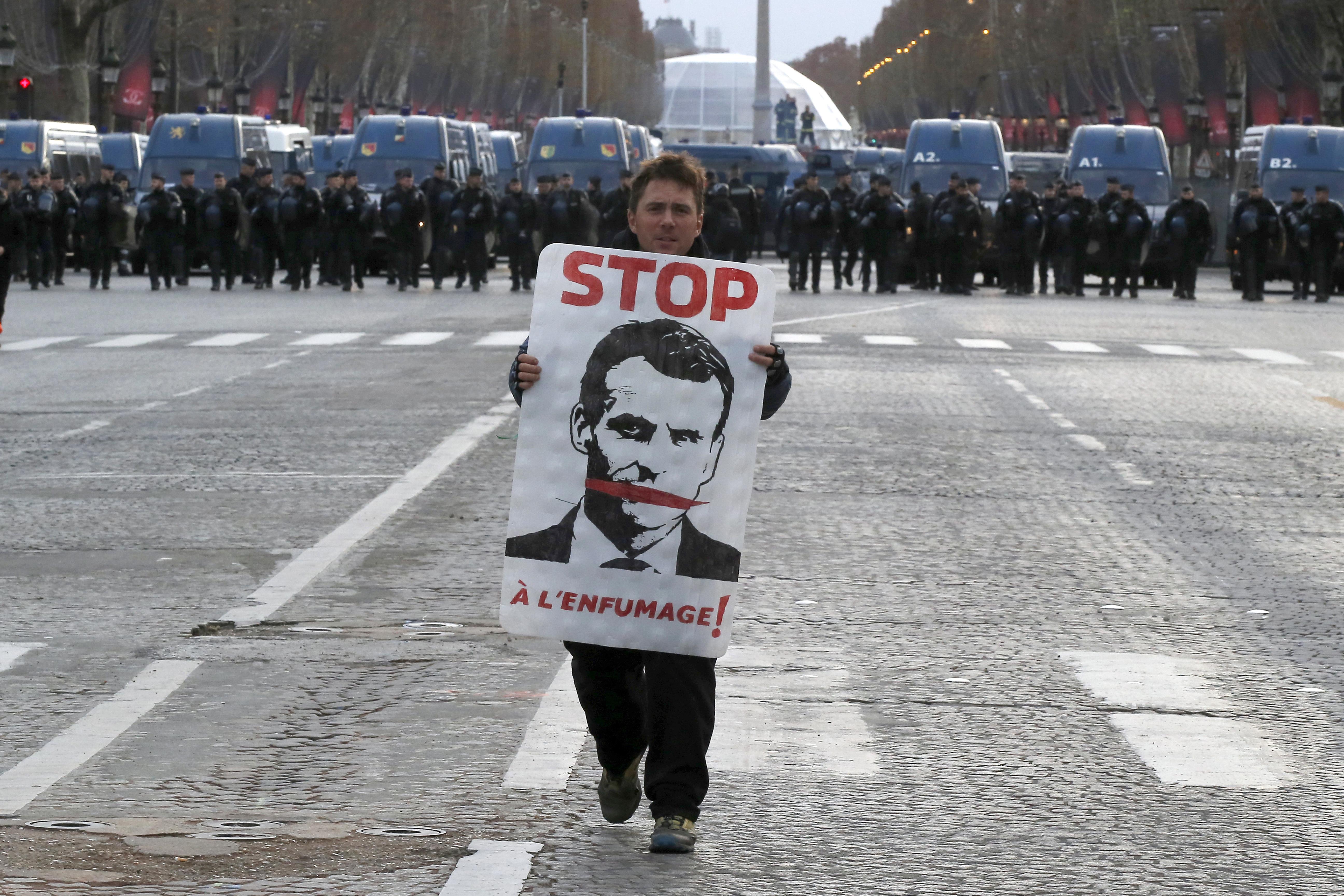 Armoured cars, water canon and thousands of rounds of tear gas were in turn used against the trouble makers.

They have been joined by agitators from the Left and Right, as well as criminal groups determined to cause mayhem.

Thousands chanted ‘Macron Resign’ and ‘Police Everywhere – Justice Nowhere’ as they rampaged throughout the centre of the French capital.

The independent Mr Macron, leader of the Republic On The Move party, won the French presidential election with a landslide in May last year, but  polls now show his popularity rating as just 18 per cent.