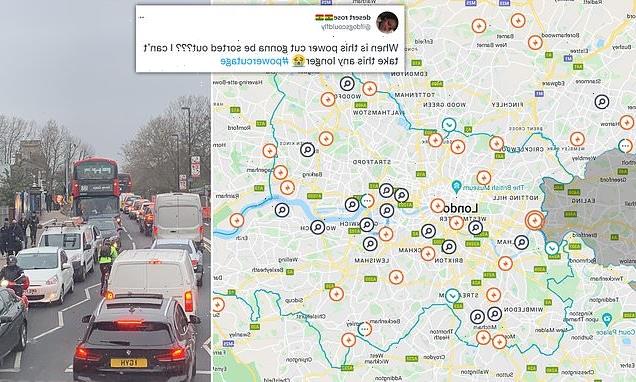 Londoners are left without power for nearly 24 hours: Thousands of homes STILL have no electricity, water or internet after cable failure hit supplies across 41 postcodes

Large areas of London are still without power this morning after blackouts yesterday forced key transport links to close and left thousands of homes and businesses without electricity.

UK Power Networks data shows swathes of the capital – from as far north as Barnet to as far south as Bromley – are continuing to experience problems today, with bosses estimating service may not be restored until 11.30am.

As many as 41 postcodes remain affected, nearly 24 hours on from when the problems first arose, after a high-voltage cable failed and a fire broke out at an east London substation.

It sparked chaos across the city, including rush-hour congestion on the roads and Docklands Light Railway, while a number of City employees had to work from home.

At one office, there were reports of staff being stuck in lifts for an hour as a result of the disruption.

‘I’m surprised that there wasn’t any contingency plan for such massive outage,’ a Citi bank employee told EfinancialCareers.

At its height, the substation fire and power cut is reported to have impacted as many as 38,000 people, though that figure is thought to be significantly smaller this morning.

Meanwhile, frustrated Londoners took to social media to tell of their own personal woe caused by the outages. 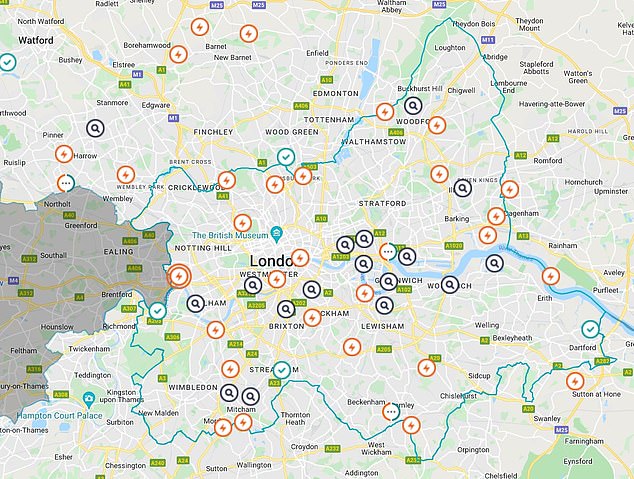 UK Power Networks data shows swathes of the capital – from as far north as Barnet to as far south as Bromley – are continuing to experience problems today, with bosses estimating service may not be restored until 11.30am 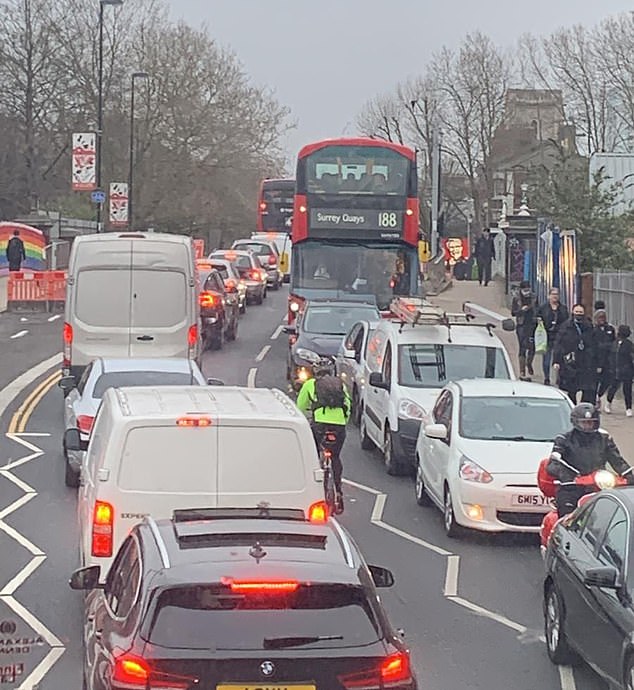 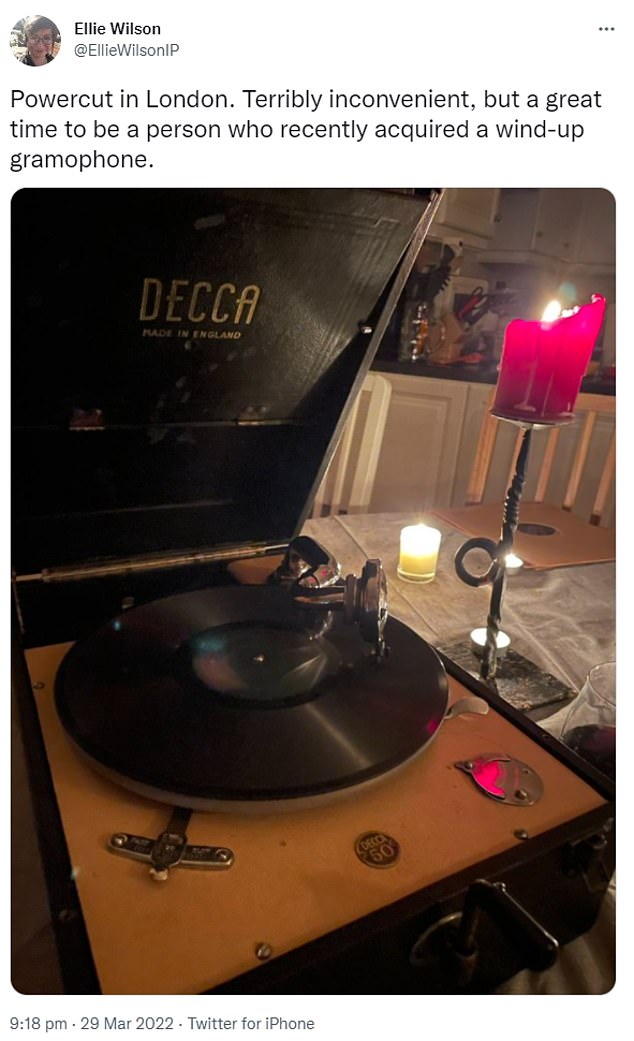 One wrote: ‘I wasn’t even supposed to go into the office today but a bloody powercut made me and now I’m in the Chinese a few pints down spending way too much money and getting prepared to be too drunk than I should be.’

Another said: ‘The power, Internet and water is still off in our part of #Limehouse,  after almost ten hours, so we’ve made the typically British response to a time of national crisis and decamped to Wetherspoons #E14 #powercut’

A third added: ‘When is this power cut gonna be sorted out??? I can’t take this any longer.’

Meanwhile another user described the blackout as ‘terribly inconvenient’ but shared a picture of them using their recently acquired wind-up gramophone.

The substation fire broke out just before 1pm and was brought under control by around 6pm, the London Fire Brigade said.

The Blackwall and Limehouse Link tunnels in the east of the city closed due to a loss of power, but reopened during the evening. The Rotherhithe Tunnel remained closed late yesterday.

A round 5,000 people were left without electricity in homes and businesses, with some outages continuing through the night.

Locals reported the power cut had reached as far away as Wimbledon and Cricklewood as 37 postcodes were plunged into disarray.

UK Power Networks said the blackouts were caused by a fault on a high voltage underground electricity cable. 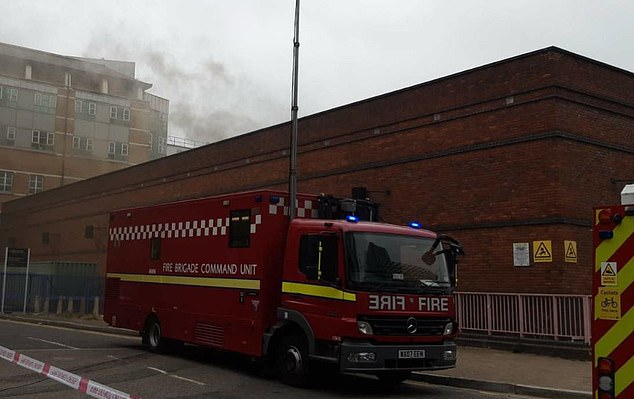 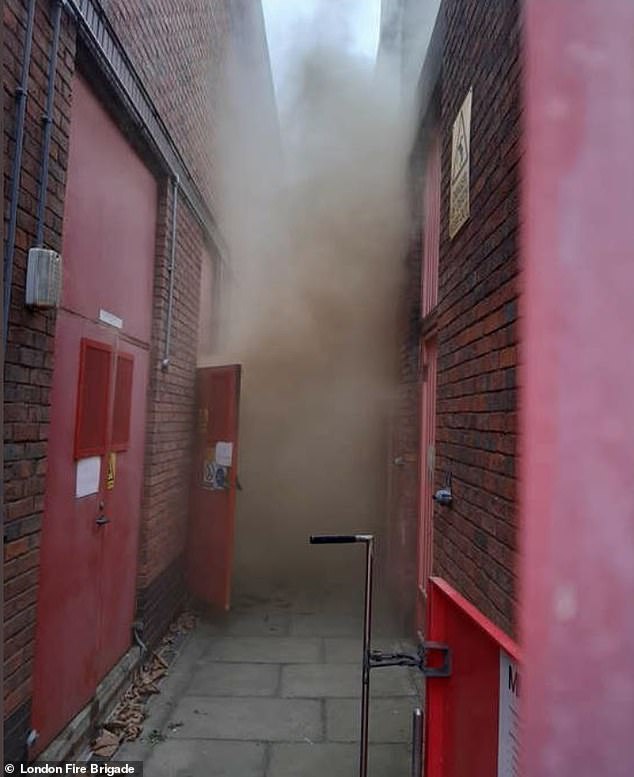 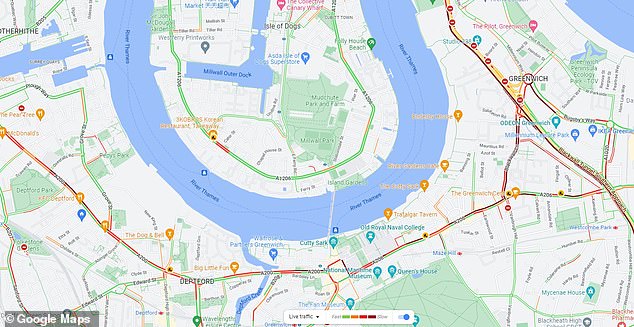 Londoners were left confused when their computers switched off and traffic lights went dead around 12.30pm.

One man wrote: ‘This was significant – looking outside of my window (and I have a view) everything was KO, including the DLR up to at least 3/4 stations from here.’

He added: ‘First power cut in London since I’ve been here, but nothing in the news yet.’

Another posted on Twitter: ‘Been stuck on the DLR bc of a power cut – today is not my dayyyy.’

One put: ‘Got a power cut and letting my lunch continue to cook in the residual heat of the oven. wish me luck.’

A woman commented on social media: ‘Yep, power cut in limehouse PureGym as well as Lidl.’

Another said: ‘Haven’t had a power cut since moving in and now today, the day after my electricity was transferred to a new company (outside my control), I’ve had two in one day.’

A man posted: ‘Just walked home from doing a 50 minute Crossfit class at the gym to find there’s been a huge power cut in my building… and I live on the 18th floor. I could cry.’

And one more added online: ‘There’s a powercut in my area and I can’t heat up my food fgs.’

‘Our engineers are working to get the power on as soon as possible. For the latest information in your area visit our power cut map.’

A spokesman added: ‘Our engineers are on site following a fault on the electricity network at 12.27pm, resulting in a power cut across parts of East London.

‘We are working as quickly and safely as possible to restore customers supplies. We apologise for the disruption and inconvenience caused.’

London Fire Brigade said: ‘Four fire engines and around 25 firefighters have been called to a fire at an electrical substation on Castor Lane in Poplar.

‘Part of the ground floor of a two-storey electrical substation is alight. A 25-metre cordon is in place as a precaution.’

Station Commander Colin Digby added: ‘The fire is causing power outages which could affect around 38,000 customers.

‘The whole of the Docklands Light Railway line is suspended. Blackwall Tunnel and Rotherhithe Tunnel are also closed whilst crews work to make the scene safe.’