A large fire has broken out next to London Bridge station forcing it to close and 70 firefighters are currently tackling the massive blaze.

The station is closed and will remain so until further notice, with severe disruption to all journeys.

The London Fire Brigade received its first call to the incident at 9.29am this morning.

It sent around 40 firefighters, but now 10 engines and an extra 30 personnel have been called to the scene. Fire crews from Dowgate, Whitechapel, Shoreditch, Shadwell and surrounding fire stations are in attendance.

Local residents are being advised to keep their windows and doors closed to protect against the smoke, which has also spread into railway tunnels close to London Bridge station.

Several buildings in the vicinity of the fire have also been evacuated after it emerged a railway arch is now completely alight.

The station has completely closed while the Jubilee line has been part suspended between Wembley Park and Stanmore, with severe delays on the rest of the line. 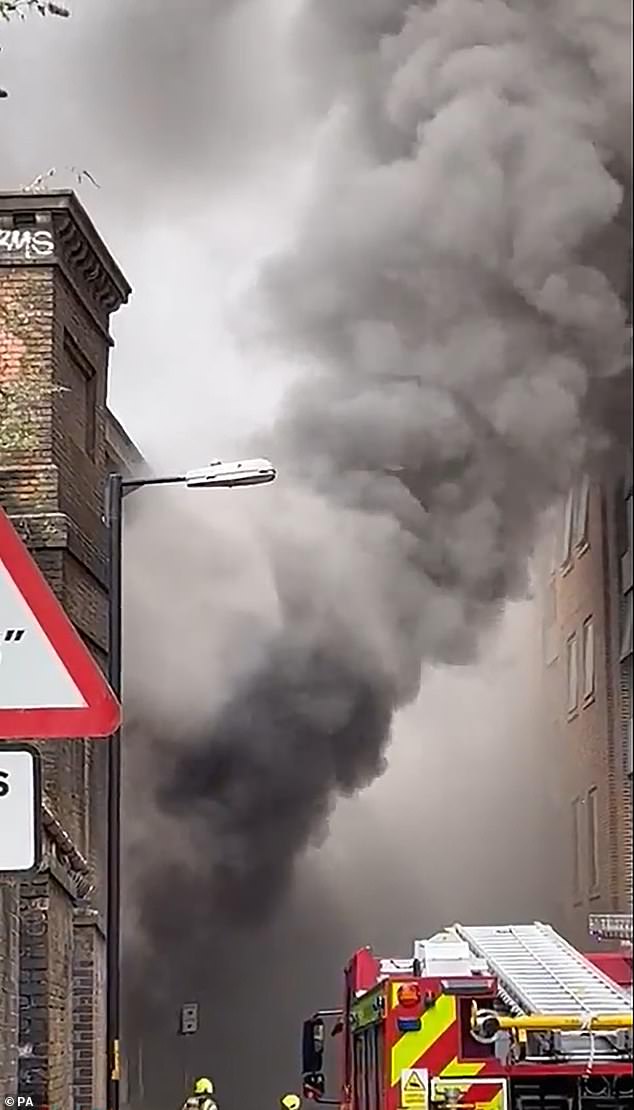 Photos on social media show the heavy smoke being given off by the fire, which has now spread to a nearby car park 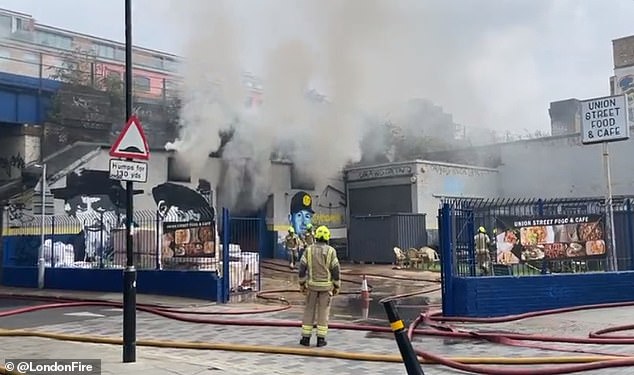 Nearby buildings have had to be evacuated and 10 fire engines have been called to the scene, which has been active since around 9.30am this morning (August 17)

Southwark station Commander Wayne Johnson, who is at the scene, said: ‘The blaze is producing heavy smoke and those living or working in the local area are advised to keep their windows and doors closed.

‘Trains to and from London Bridge are affected and several buildings have been evacuated.’

British Transport Police are assisting the London Fire Brigade as they respond to the incident, as are Metropolitan Police officers from Southwark.

‘Please avoid the area and allow the London Fire Brigade to do their job. London Bridge and Southwark Stations are closed. There are also delays on the Jubilee line.

Train operator Southeastern said the fire, which is on Union Street in Southwark, has ‘severely disrupted’ all routes through London Bridge.

It wrote on Twitter: ‘Due to a fire next to the track between Waterloo East and London Bridge, services across all routes through London Bridge are severely disrupted.

‘Trains are being diverted to other London terminals or terminated at alternative locations.’

Local student Lauren Chopin lives in an apartment two minutes’ walk from the fire and said she had to wear a mask in her apartment due to the fumes.

‘There is a lot of smoke all through Union Street and neighbouring streets, there are many fire emergency services trying to put out the fire,’ the 20-year-old said.

‘It sometimes slows down and the smoke becomes whiter, only to be followed by another huge burst of black smoke… we have closed all doors and windows to limit the amount of smoke coming in.’ 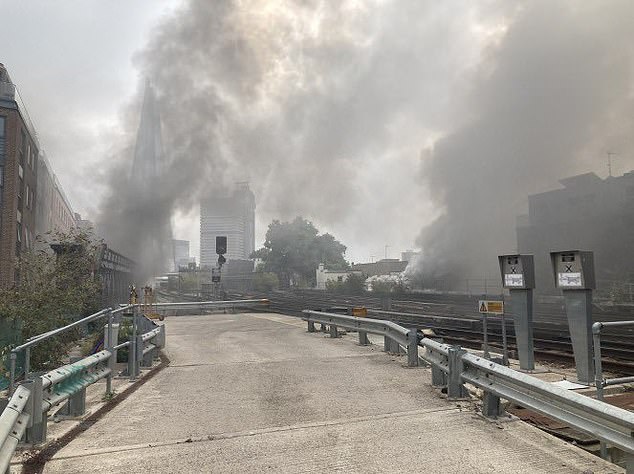 The fire broke out at an arch under the railway, meaning the whole station is now closed while firefighters tackle the blaze

Network Rail said the fire affecting London Bridge services was in an arch under the railway.

It wrote on Twitter: ‘A fire broke out in an arch under (the) railway.

‘London Fire Brigade are on site with multiple pumps and we have closed the railway until we can confirm it’s safe.’

It added: ‘We’re working with London Fire Brigade and we will need to inspect the railway once the fire out before we can reopen. Thank you for bearing with us.’

According to Network Rail four lines are currently blocked, and the fire has spread to a car park and has set several electric cars ablaze.

Smoke can be seen spreading across multiple track lines, preventing trains from coming or going from the station.

Thameslink has told its customers there are currently a number of ongoing incidents which are impacting its services, including the fire at London Bridge.

The company is advising customers to ‘change at East Croydon for a Southern service’ if they need to travel to London Bridge.

The cause if the fire is unknown at this stage, but people are being asked to avoid the area at this time.