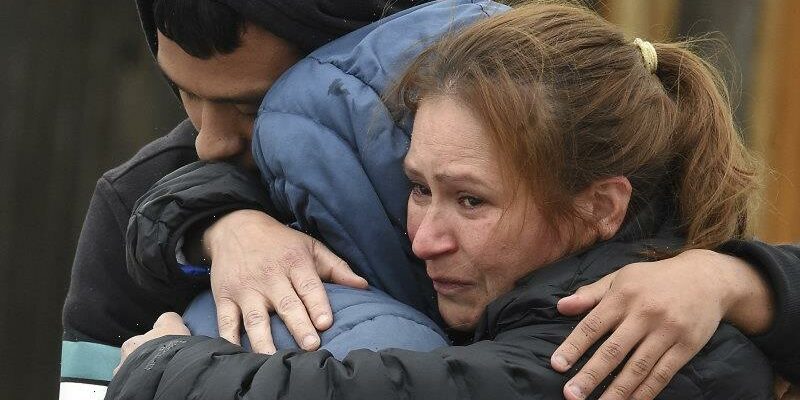 Washington: Just hours before, Freddy Marquez and his wife, Nubia Marquez, had been inside the house at Canterbury Mobile Home Park in Colorado Springs, Colorado, celebrating a constellation of family birthdays. This included Nubia, who is turning 28 this week, her bother Melvin Perez and their mother Joana Cruz, who was hosting the birthdays at her home.

The couple left the party about 10pm on Saturday night, they told the Colorado Springs Gazette. They were back huddled outside the trailer on Sunday morning, yellow crime tape cordoning off a crime scene. The home was the site of another mass shooting – at least the 11th this year, according to The Associated Press. 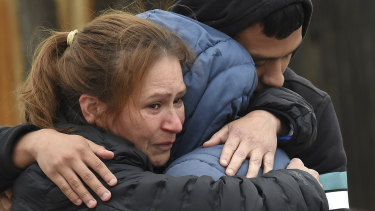 Family members mourn at the scene where their loved ones were killed in Colorado Springs, Colorado. Credit:AP

The alleged gunman was the boyfriend of one of the partygoers, law enforcement and family members told the media. Six adults died in the shooting, not including the gunman, who turned the gun on himself.

One crucial detail – that a boyfriend of one of the victims is believed to be responsible for the attack – is part of the role intimate partner violence plays in mass shootings, and gun homicides at large, experts say. According to police, the shooter’s motive is still being investigated.

The Colorado Springs killings appear to be the deadliest mass shooting in the city’s history and come less than two months after a high-profile shooting at a Boulder supermarket.

“The tragic shooting in Colorado Springs is devastating,” Governor Jared Polis, a Democrat, said Sunday, “especially as many of us are spending the day celebrating the women in our lives who have made us the people we are today.”

Every day, women are subject to domestic abuse at the hands of those closest to them. In the case of intimate partner violence, experts warn that because of guns, these incidents have grown increasingly lethal.

“It isn’t just that intimate partners are becoming more violent or more murderous,” said April Zeoli, a Michigan State University professor who studies the intersection of intimate partner homicide and firearms. “It’s something about the willingness to shoot at your partner.”

“There’s a very strong correlation between intimate partner violence and guns and gun homicide,” said Robert Spitzer, a political science professor at the State University of New York at Cortland. Spitzer has written five books on gun policy in the United States.

Experts and victim advocates have long made the case that intimate partner violence is linked to deadly gun violence, but Spitzer noted that detailed research supporting that claim has only emerged relatively recently.

One 2020 Boston University study found that nearly half of mass shooters between 1966 and 2020 have a history of violence against women; most frequently, they have a background of intimate partner violence or sexual assault. 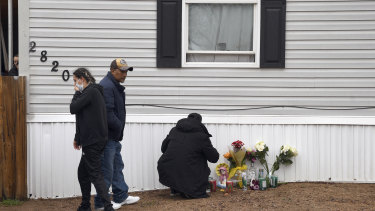 Mourners organize a memorial outside a mobile home in Colorado Springs, Colorado.Credit:AP

A 2020 Bloomberg News investigation found a similar connection: In an analysis of 749 mass shootings – defined as any shooting in which there are four or more victims, not including the shooter – 60 per cent were either attacks against a partner or family member, or committed by men with histories of domestic violence.

While attacks that seem “random” generate the most media coverage, Spitzer said, many mass shootings involve someone tracking down an estranged or current partner at their home or workplace. The other victims in those cases are children, other family members or co-workers.

Even in incidents that do not result in death, firearms are an important means of control for many abusers, Zeoli said, noting that guns are often used in nonfatal domestic abuse.

“These events involve intimidation, coercion, terror,” Zeoli said – being hit with the butt of a pistol, for example, or simply brandishing a gun at them.

“Intimate partner violence is about having power over your intimate partner. It’s about controlling them. And a gun is a very effective weapon by which to do that,” she said.

The Trace, a nonprofit journalism outlet focused on gun violence, noted in a 2016 report that the presence of a firearm in a woman’s home “triples the odds that she will be killed.” And it does not matter whose gun it is: even when a woman owns a firearm, studies show that it is far more likely to be used against her than by her, the Trace reported.

Zeoli and Spitzer say these are preventable deaths – and that updating gun restrictions could make a huge difference in preventing both intimate partner homicides and mass shootings. These include “red flag” laws, also known as Extreme Risk Protection Order laws, that allow police to temporarily seize firearms from people believed to be a danger to themselves or others.

Red flag laws have become increasingly popular in legislatures, with 19 states and the District of Columbia taking up some version of these laws since Connecticut first passed one in 1999.

But there are considerable limits to these laws, too. Enforcement rests heavily on local courts officially following up on restraining orders and domestic violence misdemeanours.

“There’s traditionally been difficulty with domestic abuse cases, partly because of traditionally sexist attitudes, but for another reason as well, which is that often there are no witnesses,” Spitzer said.

Victims of intimate partner violence are often reluctant to report for myriad reasons, Zeoli said, including fear of their abuser, concern that they will not be believed or because of inaction when they have previously tried to ask for help.

Then there are gaps in the laws themselves.

Red flag restrictions do not necessarily apply to people who aren’t spouses – a caveat known as a “boyfriend loophole.” This is because many current laws don’t regard nonspouses, especially those without children, as “intimate partners.”

These bans are not always permanent, either: once a restraining order is lifted, for example, a person accused of domestic violence can purchase a gun. And unless there’s a law that forces violent gun owners to relinquish their guns, many can hold on to the guns they already have.

After the mass shooting in Boulder in March, lawmakers are considering several proposals aimed at curbing gun violence, including a requirement that someone with a domestic-violence-related court order report the firearms they possess.

In his first speech to the a joint session of Congress last month, President Joe Biden urged congressional lawmakers to close the boyfriend loophole in the Violence Against Women Act, which has remained unauthorised since 2018.

While Republicans and Democrats have managed to pass gun restrictions at the state level – and voters on both sides have voiced support for such measures – Danny Weiss, director of the government affairs program at the Century Foundation, a liberal think tank, said it will be difficult to pass the legislation this year: Congressional Republicans are too averse to gun restrictions, he said.

There are signs that these restrictions can work in preventing intimate partner homicides – and mass shootings.

Zeoli noted one restriction that would bar anyone with a violent misdemeanour from accessing a firearm, either for a limited time or indefinitely. States that have passed those laws have seen a 23 per cent reduction in intimate partner homicides, she said.

This is because a domestic abuser is often violent outside the context of their household.

“They don’t necessarily specialise in intimate partner violence,” she said. “They’re committing other crimes as well.”