Former Deputy Prime Minister Wayne Swan is calling for the Queensland government to allow a brain cancer patient, who underwent an operation in New South Wales, to quarantine in his own home instead of at a medical hotel.

"I'm a cancer survivor, I feel about it very personally I must say," the ALP national president said on Nine's Today on Friday. 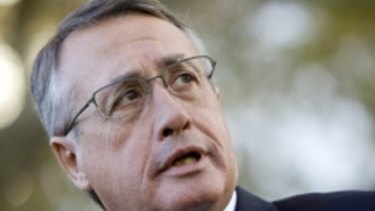 Wayne Swan said the issue needed to be taken up directly with the Queensland government.Credit:Photo: Jessica Shapiro

"I absolutely understand what that is like. It should be taken up very directly with the Queensland government – I'm happy to do it myself as well."

Gary Ralph travelled to Sydney with his wife, Wendy Child, for an operation. Despite a letter from his doctor suggesting he should recover at home, Queensland Health denied him an exemption.

They are in quarantine for two weeks in Brisbane.

Ms Child said on Friday she and her husband were suffering mentally over the distressing position they were in.

“The Queensland government, all of Australia, has been banging on for months, maybe even years, about mental health,” she said.

“The Queensland government has affected mine and Gary's mental health greatly.

“I'm more concerned about his than mine because he needs all his physical and mental strength to do the treatment … because Gary isn't cured. He won't be cured. He has very limited time. He has to suffer chemotherapy and radiation in massive doses, we were told yesterday.

“Because that's how aggressive Gary's glioma tumour is. We don't have a lot of time."

Ms Child said others were facing the same challenge.

“We’re not the only people and if Gary and I get a reprieve and we get to go home, I’m not going to stop this fight because they are messing with people’s lives and it is not justified at all at this point," she said.

“Now no one through this has told me why we don’t qualify.

“It’s been hard to keep fighting.”

The couple was transferred from a hotel to a medi-hotel this week.

"He ran into the wall, he misjudged the wall and he actually split open his hand and he came in and it was bleeding last night quite profusely…It was a bad knock," she told A Current Affair after an incident on Wednesday at the first hotel. 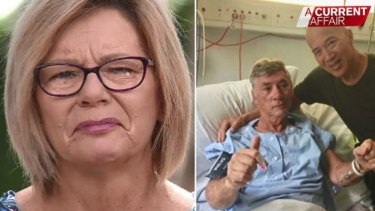 Gary Ralph had brain surgery in Sydney and his wife Wendy and are pleading to be allowed to go home.Credit:Nine

Ms Child said she never received extra dressing and bandages she had asked for.

"It’s about getting Gary into an environment that he knows where he’s going to get fed proper nutritional meals, where he can rest, where he can walk around blindfolded and won't run into things that can become a danger," she said.

Premier Annastacia Palaszczuk said it was unacceptable that Queensland Health had told Mr Ralph to take a rideshare or taxi to chemotherapy with the windows down.

"That's very distressing and can I say I'm not happy with the way Queensland Health has dealt with that at all," she said earlier this week.

Deputy Premier Steven Miles said the couple was told an ambulance would be available for medical transfers as well as being moved to the medi-hotel.

“We’ve since decided that should be the case for anyone in quarantine," he said on Thursday.

“We are listening to those concerns and obviously this story is distressing and heartbreaking but we have to continue to take the health advice by health experts.”

Mr Miles said the offer stood to have them both to quarantine in a hospital.

“The fact is that hotel quarantine has been very effective in keeping Queenslanders safe,” he said.