A legal defence fund is being launched for Julian Assange amid fears that the WikiLeaks founder is under ‘increasingly serious threat’.

The Courage Foundation, which offers legal support for whistleblowers and journalists, said Mr Assange had become ‘isolated’ inside the Ecuadorian embassy in London.

Mr Assange, 47, has been holed up under asylum inside the embassy since 2012 when he was accused of sexual assault by two women in Sweden.

The Australian denied their claims but refused to travel to Sweden to face them, saying it was part of a ruse to extradite him to the US due to his involvement in the leaking of a huge amount of classified documents in 2010. 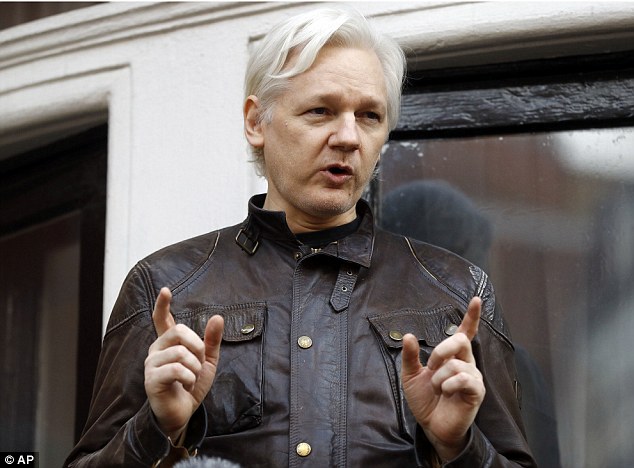 The Courage Foundation which supports whistleblowers claims Julian Assange, pictured at the Ecuadorian Embassy in London where he has claimed asylum for six years, is ‘increasingly under threat’ and has become ‘isolated’

The Courage Foundation now claims his expulsion from the embassy may be imminent, putting him at risk of extradition to the United States.

A spokesman said: ‘The US government has pursued a Grand Jury investigation into WikiLeaks since 2010, with major politicians and public figures calling for Assange’s arrest or execution.

‘It has recently been confirmed that the US government has already charged Assange in a sealed indictment and seeks his arrest and extradition.

‘In response to these developments, the Courage Foundation is launching a Julian Assange Legal Defence Fund.

‘Prosecuting Assange for publishing constitutes a major attack on press freedoms at large, and his transatlantic legal defence will require contributions from supporters around the world.’

The foundation claimed the US government will use all its resources to force Mr Assange’s extradition from the UK and take him into custody. 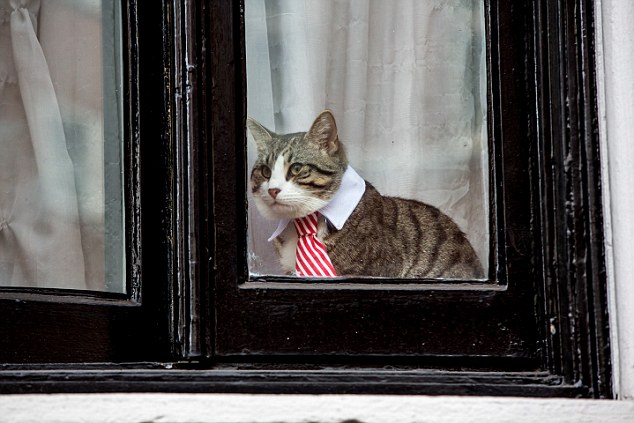 Tensions have been rising between Mr Assange and Ecuadorian officials, who have imposed restrictions on him including limited internet use and cleaning up after his cat, pictured

Last month Ecuador’s president Lenin Moreno said conditions had been met for Assange to leave the embassy ‘in near-liberty’ and that Britain had guaranteed the whistleblower would not be extradited to any country where his life would be in danger.

But a lawyer for Mr Assange has since said the deal is not acceptable.

Mr Assange has long maintained the he faces charges under seal in the US for revealing highly sensitive government information on his website.

While the exact charges against Assange remain unclear, WikiLeaks has served as a vehicle for release of thousands of classified US military and diplomatic cables.