A university lecturer who tweeted about Islam and terrorism and said that he was fed up marking essays about the ‘oppression of women’ has resigned, hitting out at the ‘smug little minds’ who snitched on him.

Michael Blackburn, who taught creative writing and English Literature at the University of Lincoln, quit following a string of student complaints for his comments about Islam and feminism.

But the academic branded these students ‘snitches’ and even made reference to the Stasi – East Germany’s secret police. 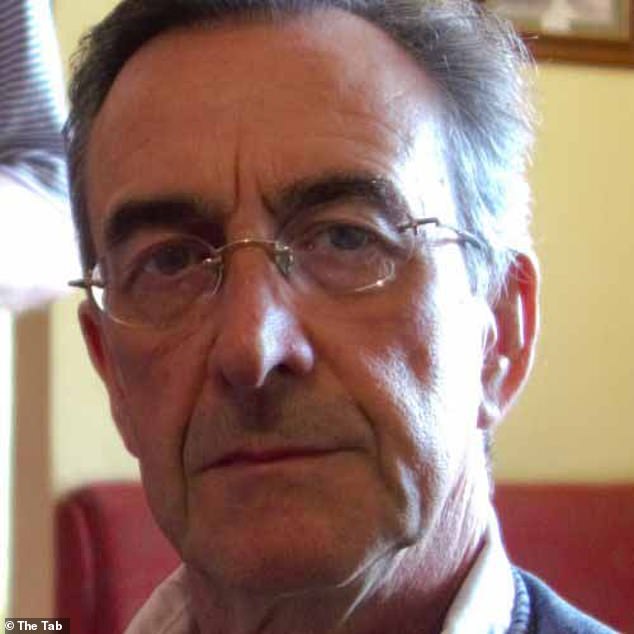 Michael Blackburn has left his post as a lecturer at the University of Lincoln following backlash over past tweets. After his departure, he hit out at the ‘snitches’ which had complained

In 2012, Mr Blackburn took to social media to say he was relieved to have finished marking assignments which bang on about feminism.

He tweeted: ‘Thank God all those papers going on about patriarchy and the oppression of women are out of the way for another year.’

And five years later, in the wake of the 2017 terror attacks, he wrote: ‘I know the media haven’t told us but I suspect these terror attacks were carried out by Muslims because of Islam.’

These tweets sparked a large backlash from students at the university and now it has been confirmed that Mr Blackburn has left his role.

After leaving his role at the university, Mr Blackburn then posted a blog on the Fortnightly Review website talking about his feelings about the move.

It said: ‘It’s unlikely that most of the students at our universities who are so keen to snitch on their classmates and lecturers for wrongthink, wrongspeak or wrongtweet have heard of the Stasi or the Securitate.

‘That’s a pity, because a brief acquaintance with those two institutions of modern totalitarianism may, just a smidgin, introduce a spark of self-awareness into their smug little minds. On the other hand they may pick up a few tips from their practices.’ 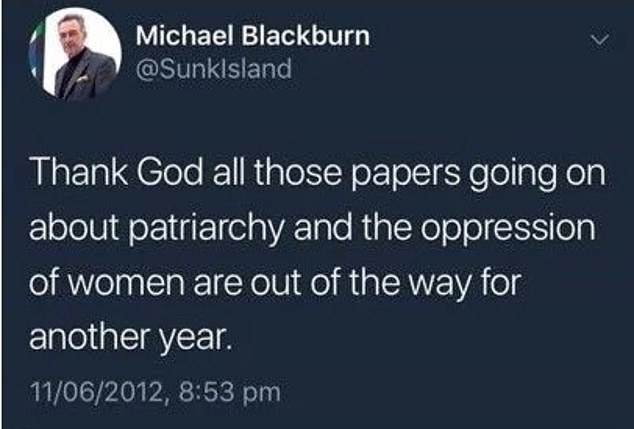 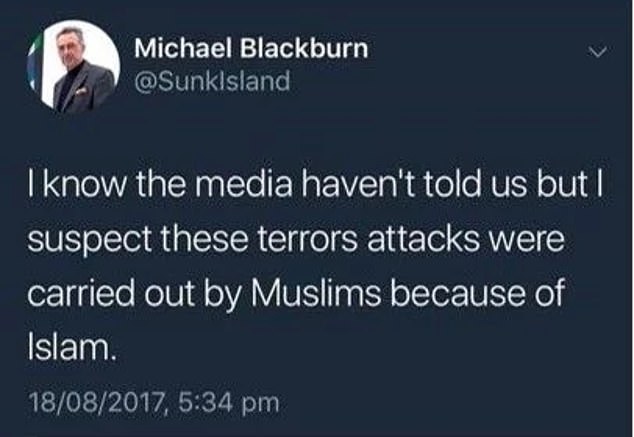 Mr Blackburn’s twitter account now appears to have been removed, but these recently resurfaced comments about feminism and Islam and terror were seen by students

A University of Lincoln spokesperson refused to confirm or deny the tweets had led to his departure.

In a statement, the spokesman said: ‘We cannot comment on complaints made against individual members of staff.

‘As a University we have a commitment to equality and diversity, and we treat each other with dignity and respect.

‘We uphold the principle of free speech exercised responsibly within the law in all our activities; the right to think and speak freely and to explore ideas is fundamental to the idea of a university.

‘Upholding academic freedom and respecting the views of others are joint commitments shared by all members of the university and we have a clear Code of Practice on the Freedom of Speech, which is designed to ensure that freedom of speech within the law is secured for all staff, students and visiting speakers.’