Kyrie Irving released a joint statement alongside the Brooklyn Nets and the Anti-Defamation League on Wednesday addressing his promotion of an antisemitic film on his social media.

Irving and the Nets each pledged $500,000 "toward causes and organizations that work to eradicate hate and intolerance in our communities." Irving acknowledged the "negative impact of my post" while stating that he doesn't "believe everything said in the documentary was true." The statement does not include an apology.

“I oppose all forms of hatred and oppression and stand strong with communities that are marginalized and impacted every day,” Irving's statement reads. “I am aware of the negative impact of my post towards the Jewish community and I take responsibility.

"I do not believe everything said in the documentary was true or reflects my morals and principles. I am a human being learning from all walks of life and I intend to do so with an open mind and a willingness to listen. So from my family and I, we meant no harm to any one group, race or religion of people, and wish to only be a beacon of truth and light.”

Irving's statement arrives six days after he initially promoted the movie on his Twitter account. According to Rolling Stone, the movie promotes tropes and "ideas in line with more extreme factions of the Black Hebrew Israelites, which have a long history of misogyny, homophobia, xenophobia, Islamophobia, and especially antisemitism.” 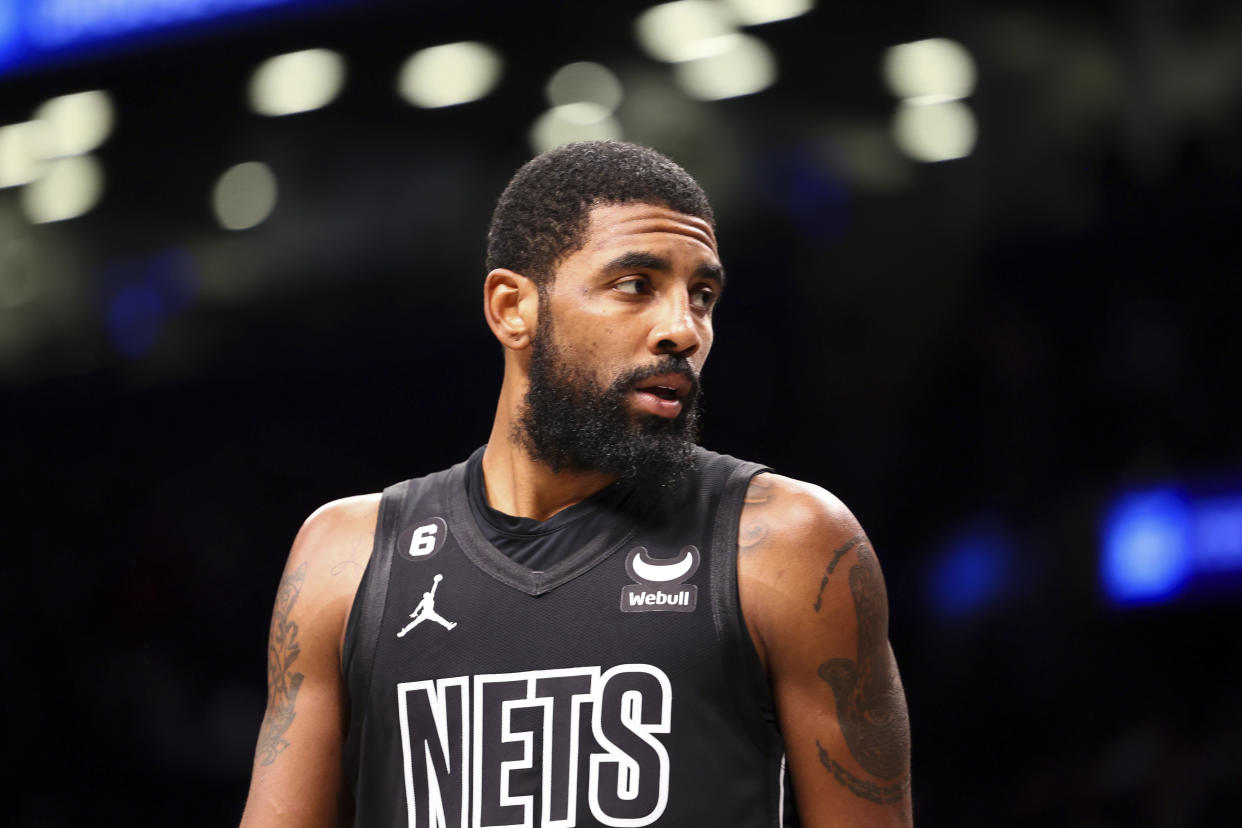 Irving kept the tweet up for four days amid public backlash before deleting it. He defended the tweet in the interim with another tweet denying "the 'Anti-Semitic' label that is being pushed on me." When asked about it for the first time at a news conference on Saturday, Irving was combative with ESPN's Nick Friedell and replied: "I can post whatever I want."

Kyrie Irving going back and forth with @NickFriedell during the Nets postgame presser 😳#NBATwitter#NetsWorldpic.twitter.com/Mn2dSsirSN

Nets owner Joseph Tsai condemned Irving's tweet on his own Twitter account on Thursday writing that he was "disappointed that Kyrie appears to support a film based on a book full of anti-semitic disinformation."

Irving has continued to play in Nets games and faced no disciplinary measures from the Nets or the NBA. The Nets have shielded Irving from further media exposure since his Saturday news conference. He wasn't made available for postgame media sessions on Monday or Tuesday. General manager Sean Marks told reporters on Tuesday that the team wanted to let Irving "simmer down" before meeting again with media.

"We don't want to cause more fuss right now with more interaction with people," Marks said.

The Nets addressed the situation in Wednesday's joint statement with a statement from Sam Zussman, the CEO of Nets parent company BSE Global.

“There is no room for antisemitism, racism, false narratives or misguided attempts to create animosity and hate,” Zussman's statement reads. “Now, more than ever, there is a pressing need to ensure education in these areas. We are putting our prior statements into practice because actions speak louder than words.”

In addition to their financial pledge, the Nets and their affiliate organizations pledged to "host a series of community conversations at Barclays Center in Brooklyn, in partnership with ADL and other national civil rights organizations as well as local community associations."