Kurdish forces who feared being abandoned by the United States were talking to the Syrian government and the Russians for more than a year before President Trump ordered US forces out of the country.

Syria’s Kurdish fighters have long been America’s battlefield allies against the Islamic State – but feared a Turkish attack if the US withdrew.

When the Kurds announced over the weekend that they were switching sides and joining up with Damascus and Moscow, it seemed like a moment of geopolitical whiplash.

But in fact, the move had been in the works for more than a year.

The Kurds opened a back channel to the Syrian government and the Russians in 2018, and those talks ramped up significantly in recent weeks, American, Kurdish and Russian officials told The Associated Press.

‘We warned the Kurds that the Americans will ditch them,’ Russia’s ambassador to the European Union, Vladimir Chizhov, told Russia’s Tass news agency on Monday. 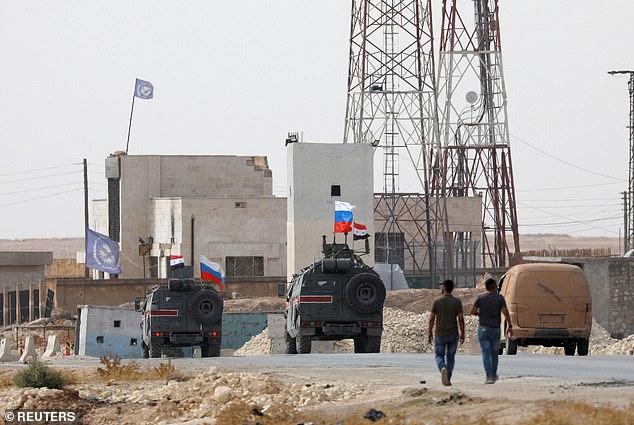 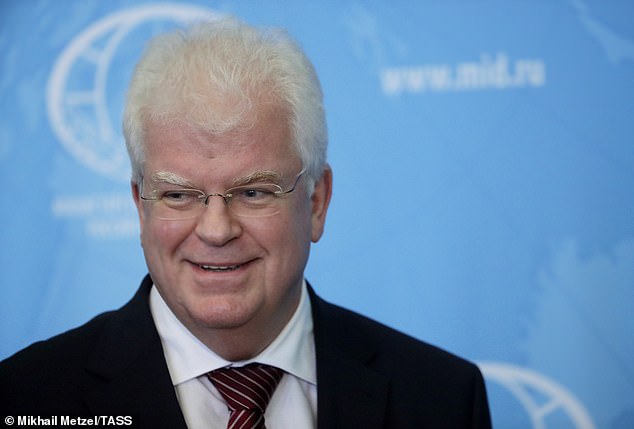 Russia’s ambassador to the European Union, Vladimir Chizhov, said: ‘We warned the Kurds that the Americans will ditch them’

The switch in allegiances is a stark illustration of how American foes like Russia and Syria are working steadily to fill the vacuum left by President Donald Trump’s retreat in the region.

It also betrays the anxiety that U.S. allies across the globe now feel in the face of Trump’s seemingly impulsive foreign policy decisions, which often come as a surprise to allies and critics alike.

When Trump announced Oct. 6 that he was pulling American troops back from northeastern Syria, paving the way for an assault by Turkey, the Kurds knew exactly where to turn.

Syria’s Kurds have publicly acknowledged courting the Syrian government and its allies over the past year. But much of the back-channel diplomacy, including the most recent talks, happened behind the scenes. 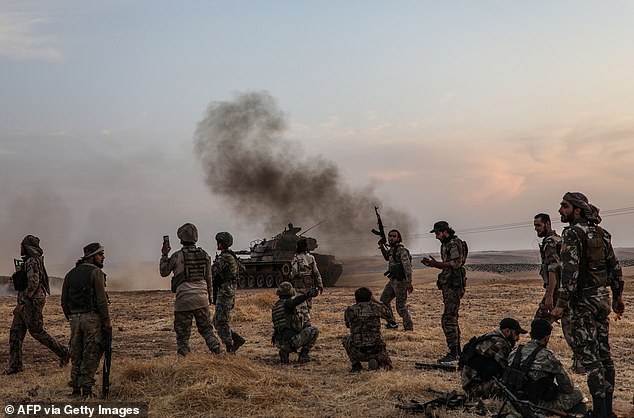 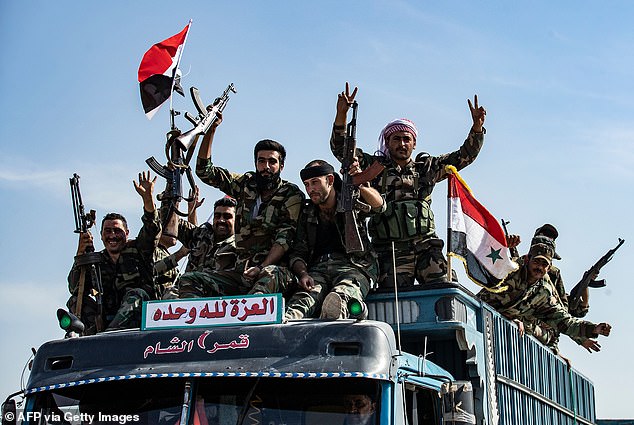 Syrian government forces arrive in the town of Tal Tamr, not far from the flashpoint Kurdish Syrian town of Ras al-Ain on the border with Turkey

The Turks have long been eager for an opportunity to go into Syria and flush out the Kurdish fighters, whom they consider terrorists. Turkey says the group is an offshoot of a Kurdish guerrilla group known as the Kurdistan Workers’ Party, which has waged a decades-long insurgency inside Turkey.

As Turkey spoiled for a fight, the Kurdish fighters were losing confidence in their alliance with the Americans. For five years, the Kurds had fought alongside U.S. soldiers and were vital to defeating the Islamic State group – something Trump repeatedly touts as a signature achievement of his presidency.

After all that, would the Americans really abandon them?

Trump sent signals they would, venting regularly about U.S. troops in Syria and wondering why U.S. soldiers were in the Middle East at all. The relationship with the Americans was wobbling.

Sensing an opportunity, Moscow reached out to the Kurds and asked them to forgo their alliance with the United States. Kurdish officials rejected the outreach publicly, saying they were sticking with the Americans. 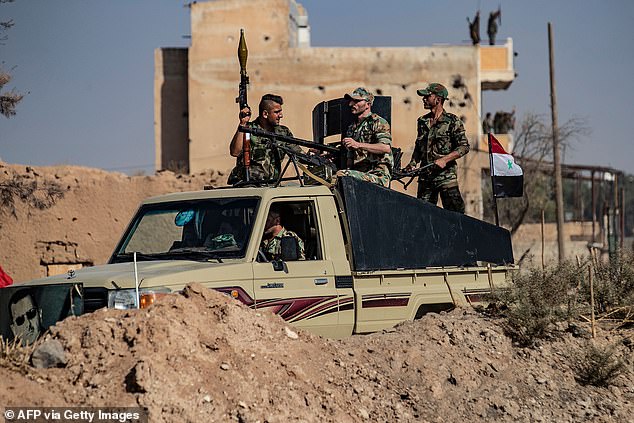 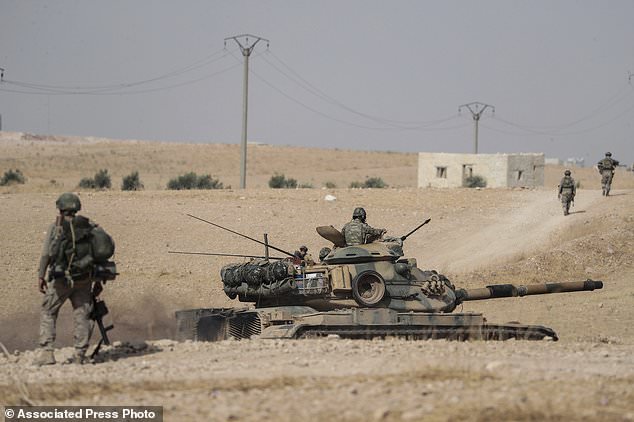 Turkish tanks and troops stationed near Syrian town of Manbij, Syria, on Tuesday. Russia moved to fill the void left by the United States in northern Syria on Tuesday, deploying troops to keep apart advancing Syrian government and Turkish forces.

What happened next was, in many ways, a turning point. Turkey launched a military operation – with the blessing of Russia – in Afrin, a Kurdish area of northwestern Syria. The Kurds complained that the U.S. was standing by doing nothing while they took hit after hit from Turkey.

Afrin has major significance to the Kurds. It’s one of the first Kurdish areas to rise up against Syrian President Bashar Assad and back self-rule, a base for senior fighters who pioneered the alliance with the Americans and a key link in their efforts to form a contiguous entity along Turkey’s border.

The back-channel discussions heated up.

In one of the first high-level meetings in Russia, a Kurdish delegation flew to Moscow in November 2018, where on the same day a Turkish senior security delegation was present. At the time, Arab newspapers reported that Turkey had proposed a 30-kilometer (19-mile) deep safe zone along the border. Russia argued for a 5- to 9-kilometer (3- to 5-mile) zone, but the Kurdish delegation rejected it. 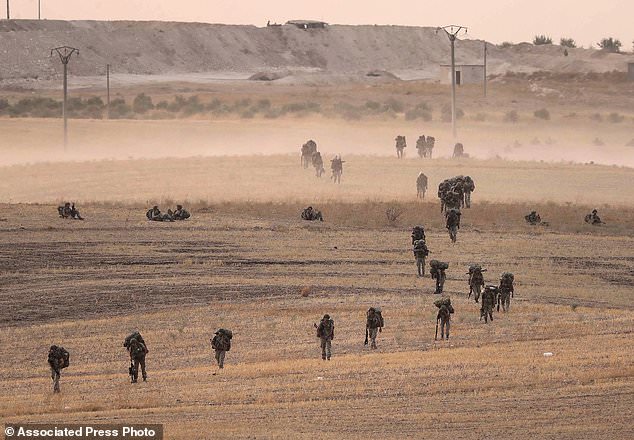 Days after, the same delegation, headed by a Kurdish militia leader, flew to Damascus, where it reportedly met with the Syrian intelligence chief and other senior security officials in the presence of a high-level Russian delegation. The secret meeting was reported by a veteran Syrian reporter at Ashraq al-Awsat, a Saudi-owned newspaper, who said the Kurdish delegation told Damascus they did not want to repeat the Afrin mistake and were ready to show flexibility.

The meeting resulted in the first cooperation between the Kurdish group and the Syrian government – at least in public. And it signaled the fraying ties with the U.S.

The Kurdish militia invited the Syrian government to send in troops to protect another Kurdish-held area, Manbij, where the U.S. had a presence. The move would have undermined U.S. power and influence in the area, but the Syrians ultimately pulled back, to a Russian base nearby, according to AP journalists who traveled to the area.

In December 2018, Trump – against the advice of his senior policy advisers – announced that he was going to pull all American troops out of Syria. The surprise announcement prompted the resignations of Defense Secretary James Mattis and Brett McGurk, the special envoy for the counter-IS campaign. 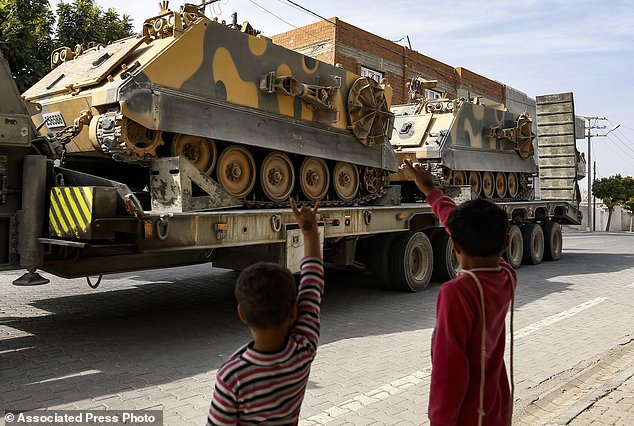 Turkey defied growing condemnation from its NATO allies to press ahead with its invasion of northern Syria on Tuesday, shelling suspected Kurdish positions near the border

Even though Trump’s national security team managed to delay the withdrawal, the Kurds were concerned enough to expand their contacts with Damascus and Moscow.

A U.S. official said the Kurds described it as an insurance policy to guard against Turkey in the event the U.S. left. The official said the Kurds preferred to deal with the United States on military issues and on matters related to civilian governance and reconstruction, but they determined it was unwise to count on support from Washington alone.

He spoke on condition of anonymity because he was not authorized to speak to the media.

After Mattis and McGurk resigned, senior Kurdish official Ilham Ahmed said the Kurds presented Moscow with a framework for possible talks with Damascus. The plan’s 11 points included the recognition of Syria’s territorial integrity and the inclusion of Kurdish-led forces within the Syrian army.

In return, the Kurds would get a political agreement establishing a decentralized Kurdish state, which would give them some level of self-governance. But the proposal never went anywhere.

The deal the Kurds’ struck this weekend with Syria and Russia was negotiated in Aleppo and finalized in Damascus, said Razan Hiddo, a senior Kurdish official. Kurdish forces will work side by side with the Syrian army to try to ward off the Turkish offensive, which began swiftly last week after Trump told Turkish President Reccep Tayyip Erdogan that U.S. troops would no longer be in the way. 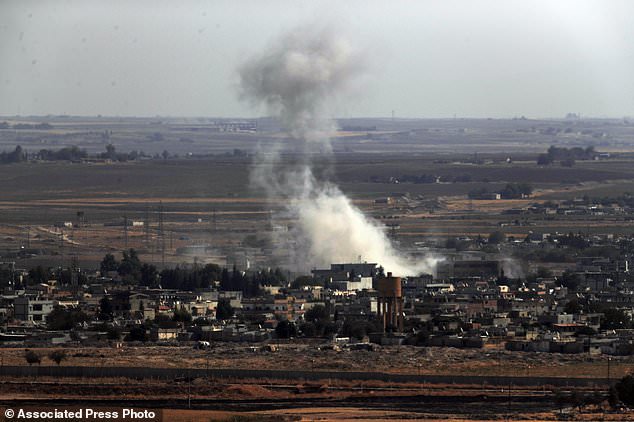 Smoke and dust billows from targets in Ras al-Ayn, Syria, caused by bombardment by Turkish forces on Tuesday. Turkish artillery pounded suspected Syrian Kurdish positions near the town in northeast Syria amid reports that Kurdish fighters had retaken the town

Hiddo told the AP that the first part of the agreement will see Syrian forces deploy in the city of Manbij and be followed by Kobani – a strategic decision to keep the Turkish offensive from expanding west.

Another Kurdish official, Badran Ciya Kurd, said the deal applies only to military protection and was forced upon the Kurds once they determined that Trump’s decision could not be swayed.

‘After we found that the U.S. decision is unwavering, we had to look into other options,’ he said.

On Tuesday, the results of the back channel were on clear display: Russia moved to fill the void left by the United States in northern Syria, deploying troops to keep apart advancing Syrian government forces and Turkish troops.

Syrian troops waved flags after they rolled into Manbij.

Trump, meanwhile, has dug in on his decision to pull out the troops, believing it fulfills a key campaign promise and will be a winning issue in the 2020 election, according to three White House officials and Republicans close to the White House.

It’s not a new issue for the president: He rallied around it in 2016 and, during his term, repeatedly urged bringing the troops home only to be talked out of it by moderating forces like Mattis and his former chief of staff, John Kelly.

But those guardrails are gone, and the issue never left Trump’s mind. He has told aides that the chants of ‘Bring them home!’ from his rally crowds, including one in Minnesota earlier this month, are evidence that the decision is popular with his base – a key demographic as he heads into the 2020 election.

Russia and Syria, meanwhile, are in a strong position to fill the vacuum left by Trump.

Last week, Russian Foreign Minister Sergey Lavrov was asked about how both the Syrians and the Kurds were looking for Russia to step in as a mediator.

Lavrov made no promises, but said, ‘We’ll see what we can do.’