Deal with the devil: The terrifying tinder box Donald Trump has ignited as the Kurds are forced to seek help from their former foe Bashar al-Assad after the USA’s ‘betrayal’

Last winter I was welcomed into the home of a Kurdish family who had fought alongside Britain and the US against Islamic State.

Against the odds they had driven the barbaric fanatics from Kobane in northern Syria. The fighting was so brutal it was compared to the Second World War battle of Stalingrad.

Yet now, with Turkish warplanes dominating the skies, they face a fresh siege and more bloodshed. 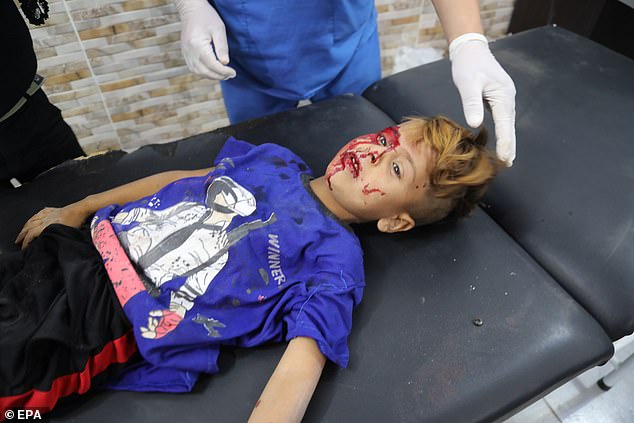 A wounded child injured in an alleged Turkish airstrike receives medical treatment at a hospital in Tal Tamr, northeastern Syria on October 13, 2019

Turkey’s president, Recep Tayyip Erdogan, has designated Kobane as inside a 20-mile ‘safe zone’ for his war against Kurdish militia.

The military offensive began six days ago following Donald Trump’s decision to withdraw US troops from the border area.

The Kurds have had to strike a ‘deal with the devil’ – asking their former foe, Syrian dictator Bashar Al Assad, to protect them.

The family home I visited last year is now abandoned and my hosts have fled, along with thousands of Kobane residents. The city has come under heavy Turkish shelling.

The Kurdish-led Syrian Democratic Forces (SDF), who were the US-led coalition’s ‘boots on the ground’ during the fight against IS and who lost 11,000 fighters, say President Trump’s move was a betrayal. 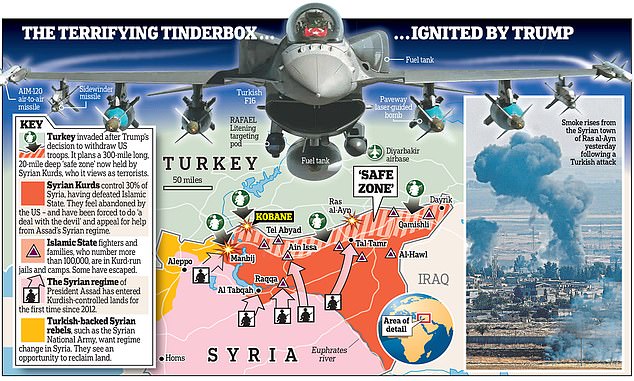 Turkey’s president, Recep Tayyip Erdogan, has designated Kobane as inside a 20-mile ‘safe zone’ for his war against Kurdish militia

In a shocking video shared online, a mother cradling her dying daughter after fleeing Kobane, cries: ‘America sold us out to Turkey. They are murdering us and our children. Where are the rights of the Kurdish people? Aren’t we human because we are Kurds speaking Kurdish?

‘I have nowhere to go and nowhere to live. Where will I go if they steal my homeland Kobane?

‘Why was Erdogan not doing anything while Islamic State was attacking Kobane and beheading our children?’

Mustafa Al-Ali, who was born in the city, expressed his fury at Washington and London for failing to intervene, despite still having special forces in the area.

‘Turkey was shelling randomly and everybody was screaming and crying,’ he added. ‘People started heading to the US base. They wanted to be protected, everyone is trying to find a safe area.

‘Kobane was the first city that defeated Islamic State. We lost so many people and now Turkey is shelling it and nobody is doing anything. The Kurdish people have been fighting IS to protect the UK and the US and we have been betrayed. 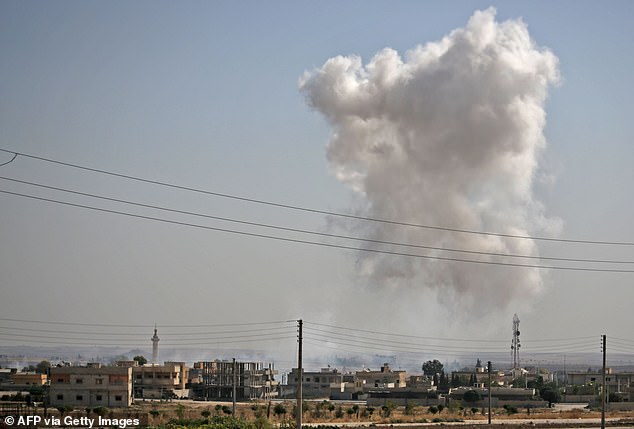 Smoke billows above the Syrian border town of Tal Abyad on October 13, 2019, as Turkish-backed forces push their offensive against Kurdish forces to take territory along the border

‘Everyone is trying to find a safe area. If Turkey carries on there will be an ethnic genocide of the people of Kobane.’

The assault forced the Kurds to make the pact with Assad on Sunday. Details of the agreement are unclear but it appeared to temporarily calm nerves despite Assad’s regime having brutally suppressed the Kurds in the past.

Residents in Kobane, which is described as the heart and soul of the Kurdish people, said they had been faced with a simple choice between the dictator or genocide at Turkey’s hands.

Kobane resident Said Mostafa Habbu said: ‘The whole world stands against us, this is murder that is being committed against us. The whole world sees what is happening and the [Western] coalition has a hand in it.

‘They have been here for a long time, then they agreed among themselves and left us. The solution for us is the regime. We are part of Syria. 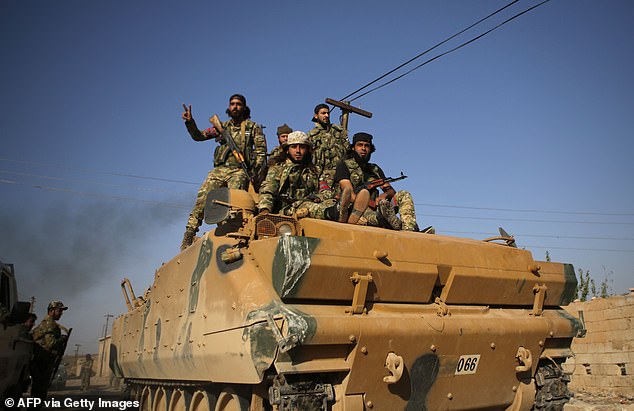 ‘I see no better than that now. Otherwise we would have faced a genocide like the Armenians.’

Another resident, Farid Jumaa, said: ‘If the regime came in now it would be very good. What can we do? We have to.’

But not everyone was happy with the defensive pact. A former petroleum worker from the countryside near Kobane, who did not want to be named, said the Assad regime could not be trusted.

He added: ‘For the Syrian Democratic Forces this is a deal with the devil. Assad would kill his people just to stay president.’ The latest fighting in Syria began last Wednesday when Mr Erdogan launched Operation Peace Spring. He considers the US-backed SDF to be a terrorist group that supports separatists in Turkey.

Yesterday he said he believed his forces would easily take Kobane despite the arrival in the area of Russian-backed Syrian troops. ‘It looks like Turkey’s operation won’t have any problems,’ he said.

Mr Erdogan promised he would keep up the fight against the Kurdish militia until ‘ultimate victory’ was secured. Turkey has the second largest army in Nato. 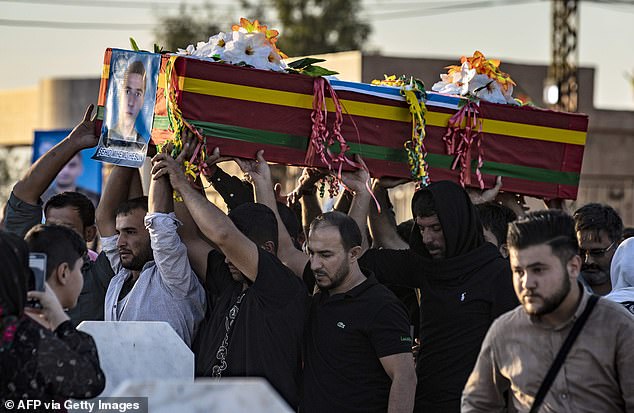 Mourners attend the funeral of five Syrian Democratic Forces’ fighters killed in battles against Turkey-led forces in the flashpoint town of Ras al-Ain along the border, on October 14, 2019

The European Union issued its strongest statement yet yesterday, saying it condemned Turkey’s ‘military attack’ on Syria. It called on ‘all member states to stop selling any kinds of arms’ to Ankara.

Meanwhile the escape of hundreds of jihadi brides from a camp in Syria has raised fears of terrorists returning to the UK.

Tooba Gondal, an alleged IS recruiter, is among those thought to be on the run from the detention facility near Ain Assa.

The site in north-east Syria was attacked by IS sleeper cells. Zara Iqbal, who has pleaded to return to Britain after travelling to the war zone with her sister Reema and their children from east London, was known to have been in the camp.

Three orphans, also thought to be from London, were rescued from the Ain Issa camp yesterday. A Save the Children spokesman said that Amira, ten, Heba, eight, and Hamza, six, had been taken to a centre for lone children. Their parents died fighting for IS.